Looking Back: A Day In The Team Car At Tour of Turkey

High drama from the shotgun seat with Team Type 1-Sanofi 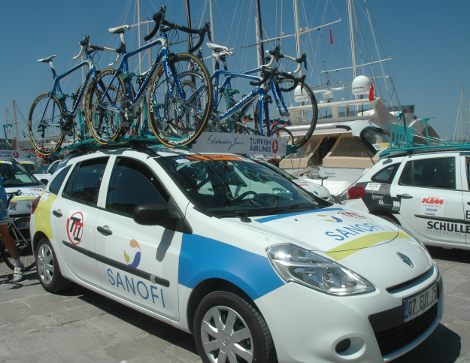 As we were sitting around telling tall tales of team car fright rides, I was reminded of my day in the team car at the Tour of Turkey back in 2012 and then  re-discovered this content in a dark crevice of RBA’s imported Way-Back-Machine. Happy to report that Team Type 1 is still out there fighting the good fight.

It all began with a chance encounter at the start of stage 6 of the 2012 Tour of Turkey in the port town of Bodrum. The scene was chaotic as a massive traffic jam was preventing many of the riders from getting to sign-in on time. As I was scurrying about trying to find team bikes and riders to photograph, I ran into Team Type 1  Sanofi PR director Chris Baldwin who promptly offered me a ride in the team’s # 1 car (of two) which would be car # 6 in the peloton. At 179km long, the day’s stage was the longest of the week long race and the thought of spending that much seat time with complete strangers at first struck me as uncomfortable, but then again, how many chances does one get in life eh?

Team Type 1 was founded by Phil Southerland in 2004 and has quickly grown into a successful Pro Continental team with a structure that allows the team to race in three major tours at a time. In fact, just two days previous, Team Type 1 scored a big stage win at the Tour of Korea.

THE DAY AT HAND
On paper, the stage from Bodrum to Kusadasi was as tough as they came in the Tour of Turkey. A quick glance in the race bible provided a quick reminder of just how storied the towns we would be riding through were. Bodrum (known as Halicarnassos waay back in the day) after all is considered the original home to “the father of history” Herodotus with a birth date somewhere in the first millennium BC.

As I said, the day’s stage was the longest of the Tour and had both significant climbs and descents. My car mates for the day included Team Type 1 general manager Vassili Davidenko and mechanic Antonio Tarducci. With my box lunch at my feet, we took our place in the train of support cars.

Vassili was a former pro rider out of the Soviet Union who would go on to make a name for himself racing in America on the Navigators team. As we got to know more about each other, he realized that we had actually first met back in 1999 at the UCI World Cup races in Napa Valley and Hawaii when (as Russia’s cyclocross & mountain bike National Champion) he was giving the world of dirt bikes a try. “I liked the mountain bikes,” he recalled, “but I realized that it was a sport that I should’ve tried ten years earlier. I would be going though some turns and riders like Cadel Evans would just flash by – it was a young man’s sport!”

As it is, he now spends about 200 days each year away from home and at the races. Talk about a heavy schedule! While not all of the Team Type 1 riders are diabetics, there was one in the Tour of Turkey who was and it was stunning to think about the extra care (monitoring their blood sugar levels and taking insulin injections) that had to be taken with their health on top of everything else they need to take care of as Pro bike racers. It’s really impressive. 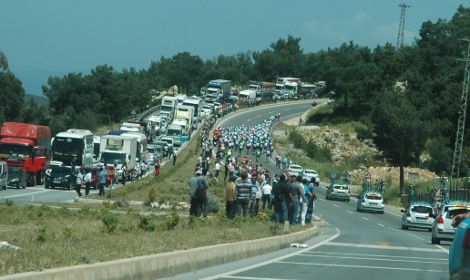 After the race director and doctor’s cars, we were in line at car #6 based on team rider Alexandre Efimkin sitting sixth overall. It was a beautiful day and  things were rolling along smoothly at about five kilometers out…but not for long.

All it took was a few riders losing concentration and hitting wheels to cause the caravan to come to a complete stop. Three riders went down hard with Vini Farnese rider Leonardo Giordani getting the worst of it with a broken collarbone. The crash reminded Vassili of a day racing in the Giro d’Italia back in the ’90’s when the gruppeto came down a road where some guy had been washing his car and the soapy water they rode through was all it took for half the pack to go down in one huge mass. Nice. 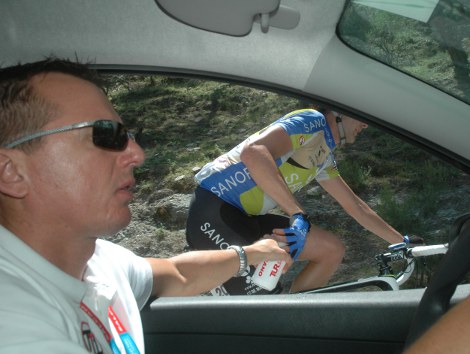 Vassili started the duties off with the basic hand-up. Between firm notions of being safe and steady, but also getting some towing advantage, I’ve never witnessed longer exchanges taking place as I did throughout the day between all the teams. 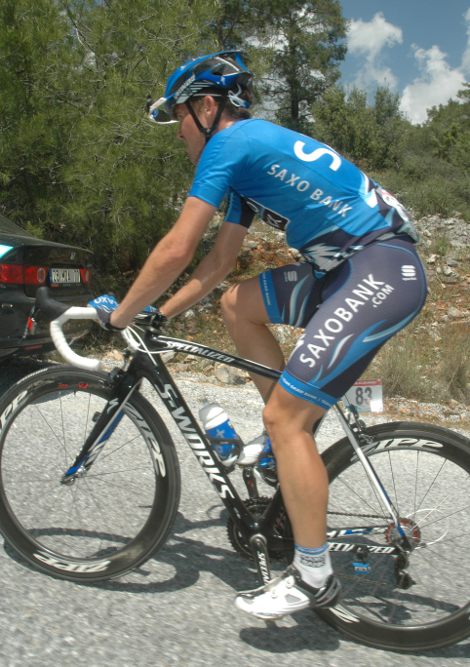 There were few better examples of a rider having both good and bad days than when we came upon the struggling Team Saxobank rider Jonas Jorgensen (above). Just the day prior, he had finished second overall, but on the climb he was isolated and off-the-back. However, moments after this photo was taken, we began a high speed and SKETCHY descent on a rough, rocky and dust covered road. Jonas went flying past us at close to 80 km darting around slower riders and in-between the team cars. Simply amazing courage and bike handling skills. 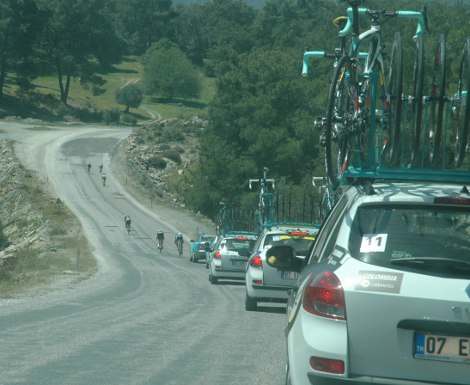 This is nearing the bottom of the long descent. It was here when we saw Jorgensen big-ringing it past us and narrowly missing a rear end collision with a Coldeportes rider who moved into his line that Vassili joked, “The Colombians…they know how to climb, but not descend. The European riders are good at both.” 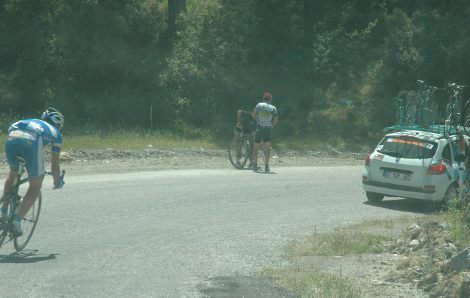 There were times in the car when I unwittingly  became a ‘team member’. Helping hand up bottles sure, but once when we were stopped in a high speed blind turn I was the first to see  Martijn Verschoor crash and had to let Vasilli know. ‘He crashed?!?!’ Vassili asked disbelievingly since neither he or Antonio could see the rider down from their vantage point. In fact he was, and it was just moments after I had watched awestruck as the rear end of his Colnago was skipping around upon entering the bumpy corner at speed. 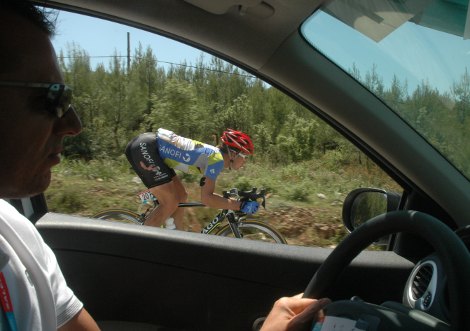 Moments after picking himself up from his high-speed crash, a tattered and bloody Martijn was right back at it trying to bridge to the riders that had passed him. This was yet another example of how and why pro bike riders are so much tougher than 99% of all other athletes in the world. 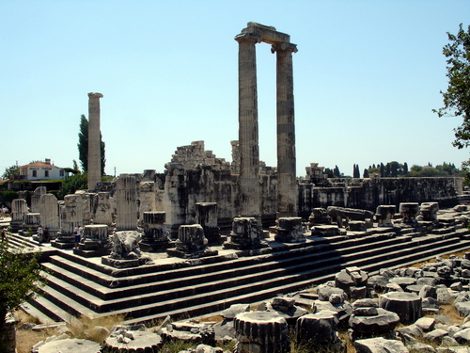 At the start of the race a reminder that the race route would pass one the ancient Temple of Apollon and encouraged everyone to stop and take a look…not a chance. Like all the other team cars, Vassili sped past the historical site with nary a glance…hey, we were there for a bike race! 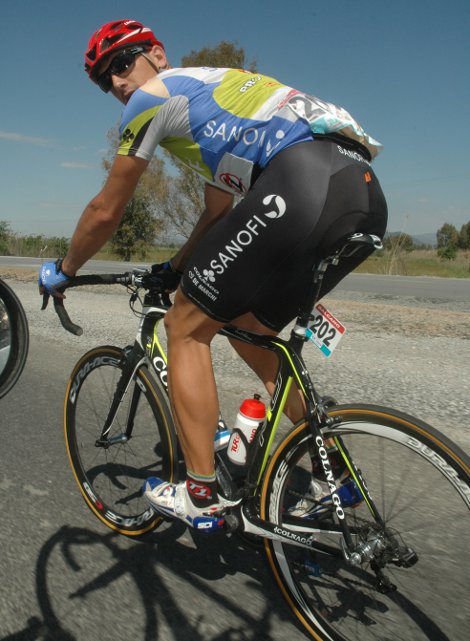 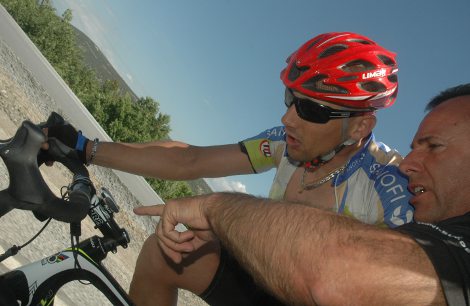 Nowhere did my inclusion into the team operations become more dramatic than when Laszlo was getting his bike worked on and his handlebar hit the side view mirror sending him and his bike into a vicious speed wobble. As both Vassili and Laszlo yelled out in horror, I dropped my camera and grabbed Laszlo’s wrist with all my might and clamped it to the door to help him get steady. Crazy. Afterwards, Antonio went right back to business like nothing happened. For most of us it would’ve been a clear case of post traumatic stress disorder to get over.

Riding With Diabetes: A How-To From A Team Novo Nordisk Athlete