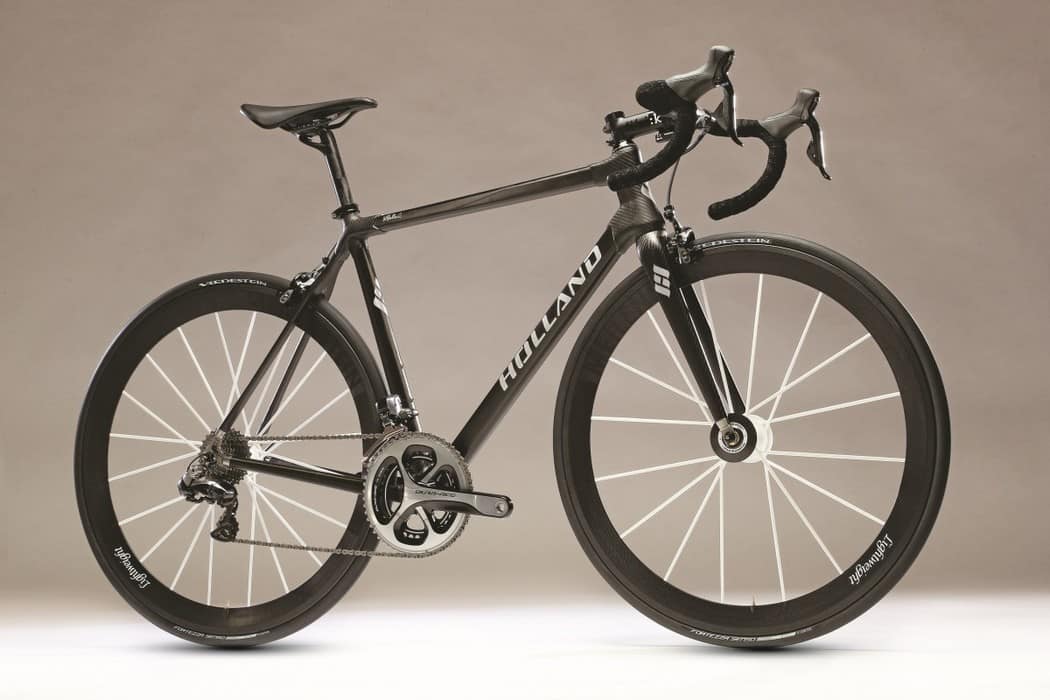 It’s been well over 40 years since Bill Holland got his ﬁrst taste of frame building under the apprenticeship of famed frame artisan Albert Eisentraut, and he hasn’t put down the torch since. Although it was steel tubes he was welding in the early years, titanium eventually became Holland’s metal of choice, and over the years he’s turned out thousands of bikes bearing his name.

Things took a wild turn two years ago when Holland rolled into the North American Handmade Bicycle Show in Kentucky with a one-off, full-carbon frame taking center stage. At the time, Bill was being conservative in talking about production availability. Little did he know then that the bike would demand a two-year process, as everything from carbon layup schedules to tube diameters would be put to the test.

As we all know there is no shortage of carbon bikes on the market. What the Carbon HC embodies is everything that Bill Holland has stood for in all the bikes he and his team have built over the years—custom geometry, American construction and the highest degree of craftsmanship.

We had been keeping close tabs on the bike ever since we ﬁrst laid eyes on it at the NAHBS show in Kentucky. Finally, Holland offered us an exclusive opportunity to visit his San Diego, California, facility where the frames are created so that we could witness the step-by-step process of getting a bike built just as any customer would. On top of that, Holland built us our very own test bike in order to see the entire process from start to ﬁnish. 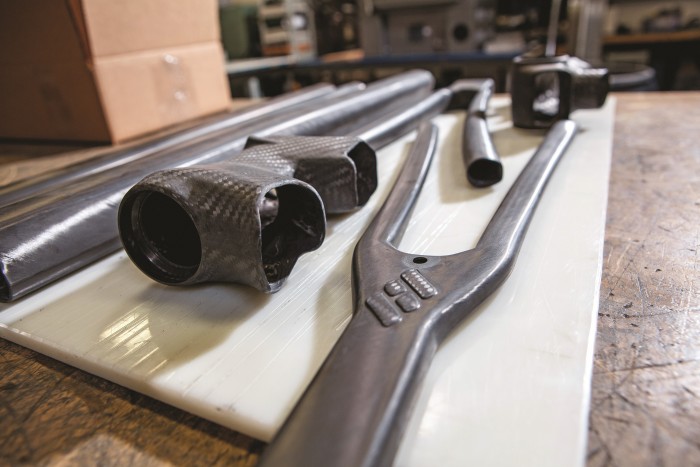 CARBON HC
As accomplished as Bill Holland is as a custom frame builder, he’ll be the ﬁrst to tell you that he’s no composites expert. That designation falls squarely on the shoulders of Mike Lopez. And although that might not be a recognizable name to most, the products that he’s brought to market deﬁnitely are. There was the Specialized Stumpjumper Epic Ultimate that Ned Overend rode to win the world championships back in 1990? The composite tubes on that bike were made by Lopez’s company at the time, Competition Composites. Have you heard of Reynolds Composites and their revolutionary Ouzo Pro fork? That was Lopez’s, too. And more recently, he made the carbon frames from Serotta, such as the Ottrott and Meivici. Once Serotta closed up shop, Lopez and Bill Holland, who already had a close connection as long-time San Diego residents, began their partnership on the Carbon HC.

The fact that Lopez has the composites expertise, his own facility and a staff that has been with him since turning out Reynolds forks in the late ’90s are the only reasons that the Carbon HC ever came about. “This project is something that could never have been done by a company the size of ours if it wasn’t for Mike Lopez coming on,” Bill Holland told us.

Much of the time and expense in tooling up for the Carbon HC comes from the vast number of molds and ﬁxtures needed to produce custom frame sizes. Five bottom brackets, ﬁve seat clusters, along with three top and bottom head tube lugs were designed to accommodate the full range of frame sizes. Each lug has sacriﬁcial carbon material laid up in the tube socket that allows for machining to precise angles later in the process. A proprietary computer program generates speciﬁc lug angles and tubing lengths for each custom frame design as well as selecting which of the ﬁve lugs are a best ﬁt. From there, each lug is held in a CNC machining center and bored for a perfect ﬁt. 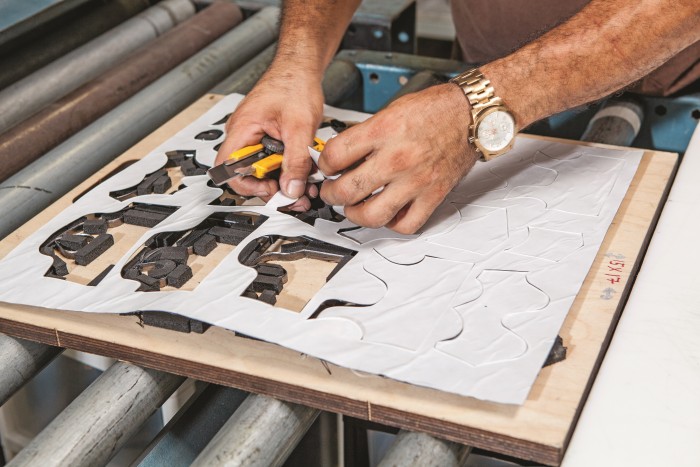 And it’s not only the lugs that are made in-house; it’s also the tubes. Multi-shaped top and downtubes taper in size to provide the desired ride characteristics, with the top tube decreasing in diameter as it moves towards the seat tube, while the downtube gets larger and more broad to meet the pedaling stiffness demands at the bottom bracket area. The tubes also receive reinforcements at the water bottle bolt bosses and at the front derailleur clamp, just in case it comes across a heavy-handed mechanic.

You might be wondering why Holland is using lugged carbon construction rather than the much more prevalent monocoque construction used by all the large brands. For one, it’s the best method to offer custom geometry on a carbon frame, and second, Bill Holland says it’s a matter of ride quality. “Lugs are separated from the tubes by the bond line, which further reduces road vibrations from traveling through the frame as it does on a monocoque frame.”

With so much attention to detail going into the Carbon HC frame, Holland felt that it would be selling it short if a fork wasn’t created that would complement it. “There are a number of good forks on the market, but buying a stock one doesn’t give us any layup or rake options. Building our own fork allows us to tune the layup and rake to exactly match the frame,” said Bill Holland. Instead of creating multiple fork molds with different rakes, Holland uses their metal expertise to use titanium dropouts that are machined with different offsets to achieve the desired rake. It’s also the same solid-plate 6/4 titanium that’s found on the frame’s rear dropouts.

THE PROCESS
By the time pre-preg carbon begins being laid into the CNC-machined molds, there has already been a multistep process to ensure that what comes out of that mold is a frame tailored to the customer’s desires. That begins with a consultation and, preferably, a one-on-one ﬁtting at Holland’s retail shop in San Diego using a custom-size cycle and motion capture software. “We encourage customers to travel out here to get in our ﬁt studio and discuss what they are looking for. If you want customers to be happy, you need to control everything from start to ﬁnish,” says Bill Holland. 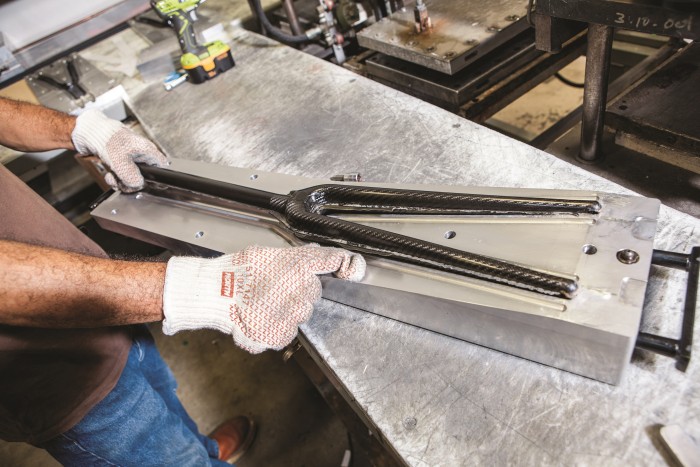 During the consultation Holland forms a mental blueprint for the frameset in terms of ﬁt and ride characteristics based off what type of riding the customer is doing, their preferred bikes and if they have any anatomic issues that need addressing. These are all things they’ve always addressed with their titanium frames, but according to Bill Holland, the metal tubes have their limitations compared to carbon. “With titanium I’m just buying the tubes, but with the carbon bike we have the ability to control every detail of it. We can create a frame with the ideal ride for an 85-pound female up to a 220-pound sprinter.”

Once the frameset details have been addressed, then it’s on to paint options and the build, with pretty much no limit on what can be delivered on both fronts. Customers can choose any build that suits them, including custom-built wheels with tied and soldered spokes and any other detail imaginable. As you can probably guess, as a premium product it comes with a premium price attached. With just a naked ﬁnish, the frame runs $6400, with the fork adding on another $700. This, of course, is a hefty sum, but considering it’s within the same range of other marquee brands, with many that don’t want you to know where the frames are being built, it’s not exactly uncharted territory. If the price doesn’t scare you, then there is the even more exclusive Signature model frame for $7700, of which only 42 will be made (by Bill himself) to commemorate each of Holland’s years of frame building.

OUR OWN CARBON HC
We went through the same process that any customer would, starting with ﬁt and rider preferences. Using the Specialized Tarmac as our benchmark for preferred stiffness and handling, and the Cannondale EVO for ideal compliance comparison, Holland went to work coming up with a blend of geometry and a layup that would pair some of our favorite ride characteristics together in one single bike. 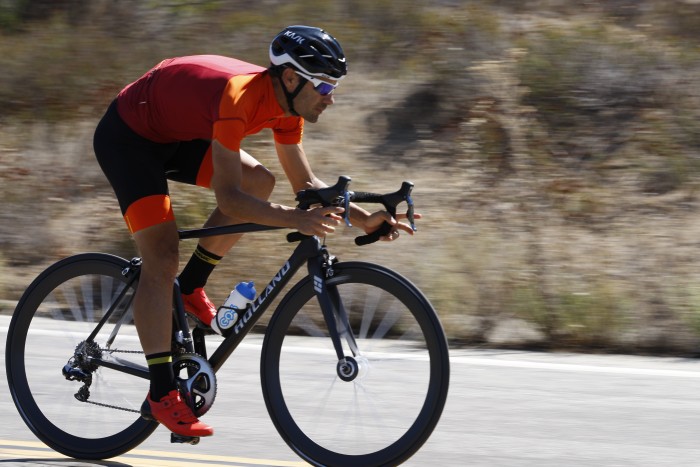 To get what we were asking for in ride characteristics, it was decided that high-modulus carbon would be used for the downtube and chainstays to achieve the targeted stiffness goal on our bike. “High-modulus carbon” is a term used quite often in marketing, but according to Bill Holland it’s not nearly as prevalent in frames as we’ve been led to believe. “High modulus carbon is expensive, and any company doing high volume will use cheaper carbon and try to get the stiffness from large diameter tubes. On our end, if we spend an extra $50 on material it’s no big deal—we spend more than that on our fork dropouts! But for big volume, it adds up.” In terms of compliance, that is left up to the small-diameter top tube where it joins the seat cluster lug, along with a tapered, round seat tube and ﬂat seatstays. All are designed to work in unison to provide ﬂex when in the saddle.

About six weeks after going through the initial ﬁtting consultation, we were pulling up to Holland’s shop to take delivery of our latest test bike. Before even throwing a leg over it we soaked in the artistry and details of its construction. A beautiful carbon weave on the lugs and fork tied the frameset together with perfection. The beautifully machined titanium dropouts were icing on the cake. 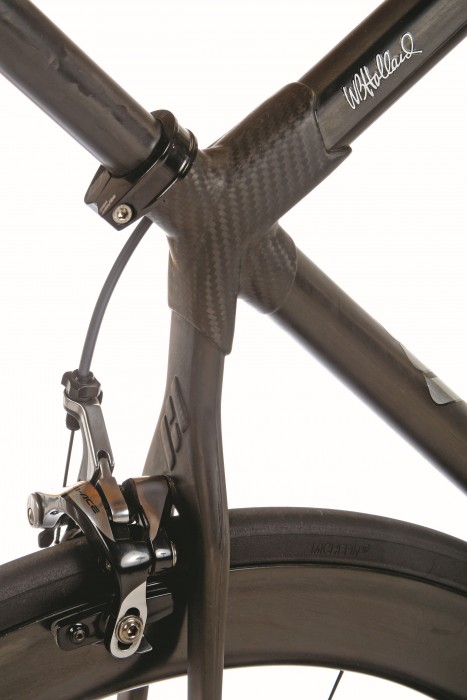 What we thought might be shooting for the stars to get Tarmac-like stiffness ended up being a non-issue. The Carbon HC had every bit of the pedaling stiffness that we dreamed of, despite our worries that the smaller-diameter tubes wouldn’t deliver it. Holland did tell us that the stiffness they targeted was on the high end of things, such as what an elite-level racer might ask for, whereas the frame layup for a 60-year-old century rider would more than likely swap the high-modulus tubes for medium modulus to give a higher degree of compliance.

Holland’s assessment of how the lugs act as a buffer from road vibrations is without a doubt a notable aspect in the ride. This isn’t something exclusive to the Carbon HC, though, as we’ve written about the very same feedback in reviews of other lugged frames, speciﬁcally the Colnago C60.

Then there’s the ﬁt itself. And since the frame was literally tailor-made for us, there was nothing that we just had to “make do with,” such as small details like a head tube exactly the right length so that a stack of spacers under the stem aren’t necessary, or a stem with a deep drop. And our inseam measurement—that’s also been thought about when designing the frame’s standover height so that an optimal amount of seatpost is exposed since that is a factor in ride quality too. All relatively small things, but putting these small things together all of a sudden, we had a perfect-ﬁtting bike with performance suited to the ride characteristics we valued most. 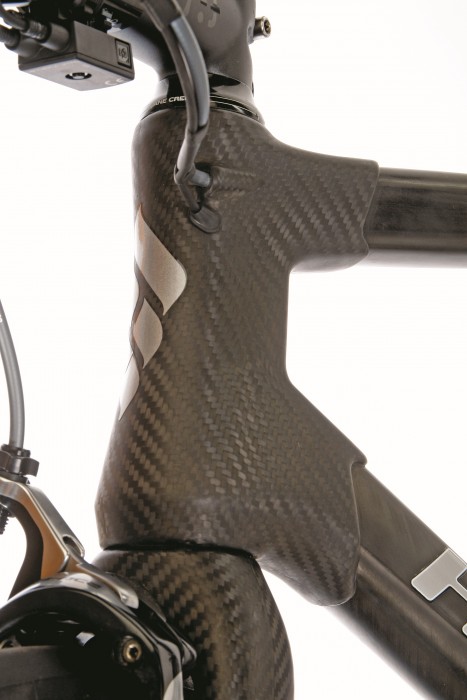 BOTTOM LINE
Is there a difference between a high-end off-the-shelf frame and the Carbon HC? There is indeed. We’ve never had a bespoke suit or anything else of such luxury made for us, but it’s indeed something we could get used to. The bar is continuously raised higher and higher in bike technology, speciﬁcally in areas that are quantiﬁable, such as on a scale or in the wind tunnel. Then there are the things that Holland holds in higher regard, and that’s custom geometry, ride quality, construction methods and the opportunity to meet the builder of your bike. To each his own.

Because Holland produces only around 100 frames per year, there’s about a 12-week wait list.

Go to hollandcycles.com to check out their custom road bike options