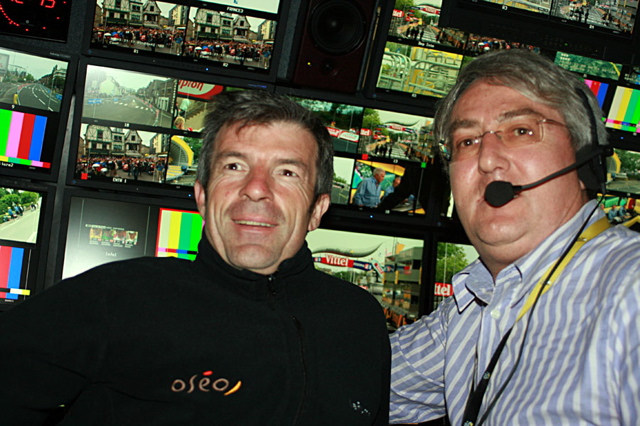 Thanks to our old friend Ronan Pensec, RoadBikeAction had the rare privelige to be invited inside the France 2/3 television Tour De France TV Control Room during a stage of Le Tour. ‘No journalists are ever invited in here’, confided Pensec as he led us up the steps to the mobile control room, as big as a semi-trailer, in the cable strewn ‘Zone Technique’ behind the  stage finish area. Right across the was the double decker mobile control room & studio of Versus, where Roadbikeaction.Com contributor Bobke Roll was ensconsed with a plethora of vestal virgins kowtowing to his every whim. But we managed to ignore Bobke, his bling and posse and just kept our eye on the prize: a special look-see at how France Television manages the broadcast of one of the most complex sporting events on the planet.

45 year old Pensec is one of the most engaging personalities in French cycling community. Nickamed Pinpin, Pensec was a tough little Breton rider from Douarnenez who was a pro rider from 1985 to 1997. Sixth in the 1986 Tour with Peugeot and 8th in the 1987 Tour with Z, Ronan was an important teammate for Gred LeMond. His most important moments at Le Tour were when he wore the Maillot Jaune at the 1990 Tour, won by his Z teammate LeMond. Pensec retired in June 1997 and went to work for France Television as a commentator.

His friend Jean-Maurice Ooghe, producer of France TV’s Tour coverage saw that Ronan could also help on the production side of things as a spotter, who could watch the multiple images in the control room and help Ooghe and his production team understand the nuances and movements within the Tour De France. Pensec told us ‘Since 2006, the Tour has been a totally HD digital broadcast and all the cameras are fitted with lens stabilizers, which maked for a better quality picture.’ Ooghe and his team produce the images for France TV and also the live feed that goes out all over the world. The palpable tension inside the control room comes from the awareness that millions and millions of viewers worldwide are going to be watching your broadcast. In his 11th year of directing the Tour de France. broadcast, Jean-Maurice Ooghe is in charge of six hours of live broadcasts. Before the Tour went live, we asked him about his passion for cycling.

‘ I go to check the Tour course in advance of the race between January and the end of May. I look at the geographic details and cultural points of interest within 10 to 15 km. Then we edit our shot book, so I learn to know every church and other landmark we shoot. The Tour is also a view of France from above. Ooghe explained to Road Bike Action how his typical day works, saying  ‘Every morning I get to the finish line at 11am and make sure all of our various teams are in place. Then I go over the shot list for the day with my assistant director. Everything is planned in advance, but if we see something special or unusuall along the roadside, we will improvise to film it. After lunch, we all head into the mobile TV studio for our live broadcast that goes live at 2pm.’

Ooghe explained that with the new digital format in place for the Tour already since 2006, ‘we use 16/9 format, but that is for France, as we still use 4/3 for the countries that do not use HD format. We asked the man who is considered the top cycling TV director in the world which are the images that are most difficult for you to capture and Ooghe quickly said ‘the suffering. On the Tour, there are tears, wounds and injuries and you have to know how to manage these images with modesty and without being voyeuristic. We show some delicate images and we convey information, but when something happens like a crash, we have to be careful how we communicate this, especially regarding the familys of the riders.’

We finished our chat with Monsieur Ooghe, who had to prepare for the Tour De France broadcast and Ronan Pensec took us through the details of what makes up the Tour De France TV broadcast. Pensec has spent a dozen years with the France TV crew, since he retired from racing. ‘We have a huge crew for the Tour; besides the numerous fixed position cameras and boom camera at the finish of every stage, there are five TV motorcycles, plus two sound only motos, like the one with Laurent Jalabert that do interviews doing the race. Every stage we have a camera and reporter in one of the team cars, too where we can interview the sport directors during the race. Up above is the eye with two helicopters with special TV cameras and an airplane that relays the signals between the various cameras via microwave relay.’

We asked Pensec what his job is and he laughed, then gave us a typical French shrug. ‘Well I listen to the radio tour transmissions to keep up with what is going on in the race, then help the director understand what is going on in the race. I help them chose the images that go out on France TV and the international feed. It can get difficult to follow the race during mountain stages and time trials. But we manage to keep things happening!’ joked Pensec.

Ronan Pensec also told us about his travel business, Ronan Pensec Travel. Link HERE.  ‘I’ve been working on this business for a while and it’s going well. We have been named as an Official Tour Operator by the Tour De France and organize trips to the Tour, to L’Etape du Tour and also bring French people to the States for some trialthons, which have become very popular. We have a really cool package called VIPcyclotour, where you can ride parts of stages of the Tour de France on the same day as the pros; just hours before the Yellow Jersey and the peloton! People love this VIPcyclotour package, so we hope a lot of our friends from America will try it on the Tour next year.’ The action was about to start as Jean-Maurice Ooghe started firing questions at Pensec, so we nodded our head in thanks and headed out of the nerve center of France TV’s Tour De France coverage with an ?a bientot’?we hope!