Chris Froome on Sunday set his sights on a fifth Tour de France in 2018 which would move him alongside legends Eddy Merckx, Jacques Anquetil, Bernard Hinault and Miguel Indurain as a five-time winner.

“It’s a huge honour to be talked about in the same sentence as those guys with their place in the history of the Tour de France,” said 32-year-old Froome. “It is just a privilege to even be in the position to be going for that kind of record. “Each time I’ve won the Tour it’s so unique and so different and it is such a different battle to get to this moment. “So they’re all special in their own ways and this year I think will be remembered for being the closest and most hard-fought battle between the GC rivals.”

First of all, however, was a Froome family celebration after being reunited with his wife and young son in Paris. “It’s amazing to see them again. It feels like more than a month on the road,” said Froome. “Definitely a celebration is overdue. I’m looking forward to it.” Froome had already toasted with a glass of champagne on the road during 21st and final stage of the 104th edition of the Tour, a 103km run from Montgeron to Paris.

The stage was won by young Dutchman Dylan Groenewegen, denying German veteran Andre Greipel a hat-trick of wins on the Champs Ulysses. Having won in 2015 and last year, Greipel left his charge until too late and just failed to overhaul Groenewegen. “I was in the position I wanted to be in the corner, but maybe I should have gone a bit earlier,” admitted Greipel, whose Lotto Soudal team failed to win a single stage this year. “Groenewegen made a really strong sprint. It was a headwind and in the end maybe the race was five metres too short. “Of course I am not happy and the team is not happy that we didn’t win a stage and now we have to look forward.”

Groenewegen of the Lotto NL Jumbo team said he’d picked the right wheel to follow into the sprint. “To win on the Champs-Elysees makes it a perfect day. We’re only five riders in the team but it was enough today,” said the 24-year-old. “They did a great job. They put me in a good position, on the wheel of Alexander Kristoff and then I rushed to the finish line.”
For Rigoberto Uran, second place to Froome was a reason to celebrate. No-one before in any of Froome’s previous Tour victories had finished within a minute of the dominant Briton — Uran was at just 54 seconds.

“I’m delighted, it’s emotional, the fruit of many years of dedication, hard work and effort,” said the 30-year-old Colombian. “Today is the recompense. I feel like I’m flying. “It was a great race against a rival like Froome. Now’s the time to make the most of it. “My message to the people of Colombia is to work hard — things come to those who work hard, are dedicated and try.” 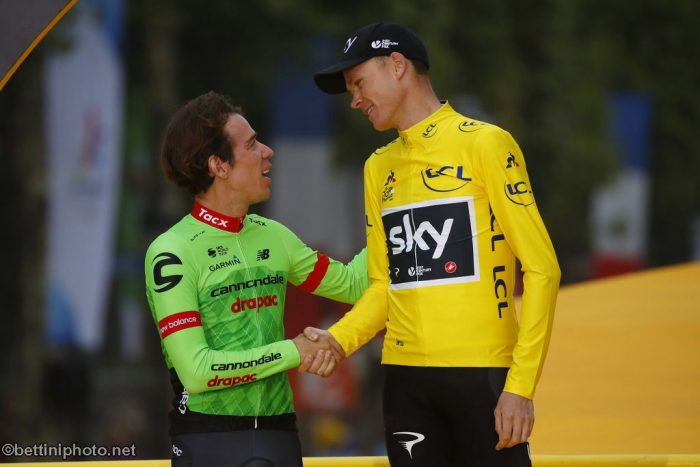