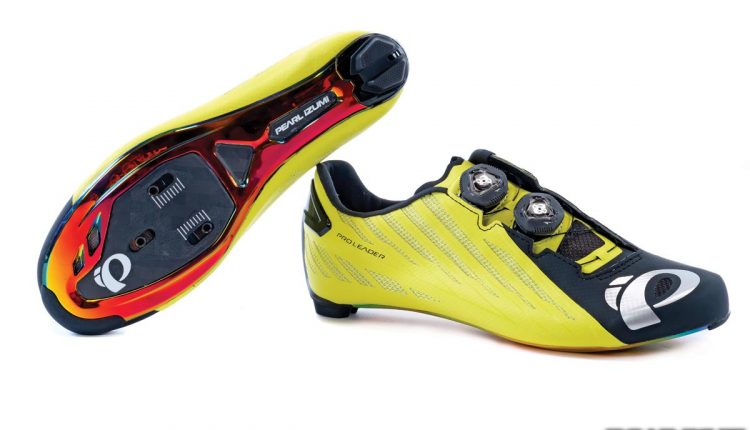 Nearly 60 years ago Kinji Shimizu founded Pearl Izumi as a way to improve and help his son’s bike racing career. As the company grew, so did their product line, which began focusing on gear for runners. In 2016, after 13 years in the running market, Pearl Izumi decided to recommit to their origins (the brand was also assumed by Shimano) and focus solely on the bike side of the business. Pearl has never faltered on the bike side of things, but this move solidifies the commitment the brand has to the sport of cycling.

THE TECH
The P.R.O. Leader V4 is exactly as the name applies—the fourth and most recent version of their top-tier road shoe. Gone is the top ratchet buckle with dual hook-and-loop straps of the first generation to the now dual IP-1 Boa dials with 1mm of adjustment per click. These dials are mounted on the tongue of the shoe, which is offset to the outside of the foot from center a few degrees. This offset means that pressure from the retention is wrapped over the ridge of the foot away from sensitive tissue. The three-layer seamless upper has great structural support thanks to many well-placed mesh openings that deliver a highly ventilated shell.

The sole is uniquely joined to the upper to deliver only a 5mm stack height for improved power transfer. This integrated carbon sole is light and stiff with a three-dimensional framing that has a striking electroplating, leaving the center portions as raw carbon. This contrast is stunning to look at even if you are the only one that knows it’s there. The sole uses the standard SPD SL three-bolt pattern and only has two small ventilation ports at the very front. There is a very thick heel pad that helps level the foot when walking is needed.

THE RIDE
The Boa dials are easy to operate, allowing the ability to precisely dial in the tension throughout the shoe. The padded tongue houses a generous amount of padding in the center under the dials, but quickly tapers off for a perfect transition to the rest of the upper. The heel cup has a low profile but effective plastic reinforcement on the outside that, matched with contoured internal heel padding, holds the heel secure. Stiffness in the shoe is exceptional and offers no noticeable flex even under hard efforts out of the saddle.

One thing that helps this shoe stand out even more than the eye-catching sole is what’s inside the shoe. The insole is one of the most customizable we have seen and lets us mimic the contours of our custom insoles with much less weight and a precision factory fit. There are independent left and right arch and forefoot varus canting adjustability, allowing the ability to maximize your pedaling mechanics. This is something most companies leave for the aftermarket or as an add-on, but Pearl Izumi includes it in the box. When used properly, these slight alterations offer fit and performance gains that well exceed the value of the shoe.

THE VERDICT
This is a shoe that, thanks to its seamless shell, looks sleek and simple. The lack of ventilation in the sole is made up for in the upper without sacrificing support. The fully customizable set of insoles deliver unmatched support and performance. The sole is stunning to look at but even better to ride with. A stiff structure, and the three-bolt eyelets the cleats mount to are on slotted openings for additional adjustment over that of the cleat itself. In short, this is a lot of shoe for the money.