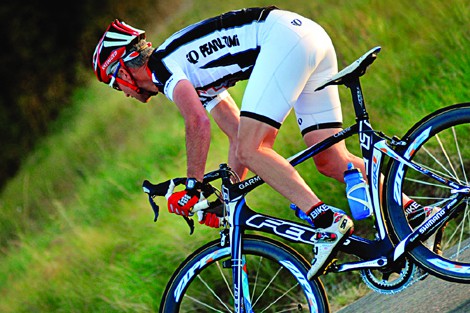 THE STORY
We first spotted the AR Team issue while sitting in a French television trailer at the finish line of stage 3 at the 2008 Tour de France. We were watching Will Frischkorn out in front of the breakaway on the monitors. He had just picked up his new AR a week before. American fans held out hope he would win the stage, and he almost did, but a pause with 500 meters to go relegated him to fourth on that day. Not bad for his first Tour de France! His performance that day filled the young Garmin-Chipotle team with hope, which would propel Christian Vande Velde into overall contention.

We got a hold of Will Frishkorn’s e-mail that day describing his new AR Team Issue: ‘Talk about a perfect day for the AR! That thing is made for the breakaways, and I got to take the advantage today for sure. Sorry to be quick-pretty crazy here right now? But seriously, thank you, guys, for all the support of the team and some sick rigs.? I don’t know why aerodynamics gets so much attention but is seemingly forgotten about on road bikes…. A team on the front, or when guys are in breaks… Pretty important!’ 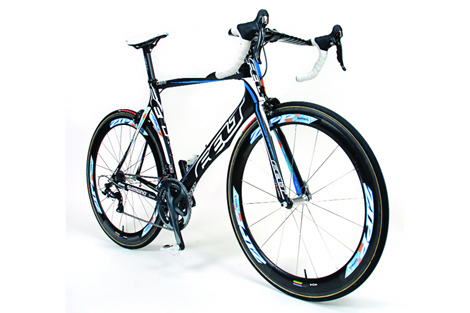 THE FRAME
Jim Felt has always been at the forefront of aero, and the AR Team Issue is no different, other than it’s not a TT bike. It’s a road bike, and the AR Team Issue is an example of a new trend in road bike design to incorporate the benefits of aero designs into road frames. The AR Team Issue features Felt’s ‘Ultra-Hybrid Carbon Fiber’ with nano technology (microscopic carbon tubes used to replace the softer, resin content between each carbon strand to add strength and stiffness). The semi-aero frame features all-internal cable routing with housing guides that feature O-ring seals to prevent grime from entering the frame. The fork fits precisely into a cutout at the downtube junction, and the rear tire is almost wrapped in the curved back side of the seat tube. It is truly a thing of beauty. The end result (in real-world-speak) is that the drag on the AR is approximately two percent less than on a conventional road bike, and according to Felt, one-percent less than other aero-bikes tested. Felt converted the numbers into a time-saved scenario and claims a three-hour (180 minute) ride will give the rider of the AR 3.5 free minutes over a conventional road design.

THE NUMBERS
Our 56-centimeter AR Team Issue weighed pretty close to 15 pounds  (We tested a pre-production model. Felt tells us that the final version will be 200 grams lighter). The head angle is 73.5 degrees and the seat angle is 73.125 degrees, the top tube is a straightforward 56 centimeters and the standover height is 79.4 centimeters. The AR Team Issue is available in 51, 54, 56, 58 and 61 centimeter sizes.

THE RIDE
Fast and stable and straight. That’s how we would describe this bike. One test rider commented: ‘I can’t think of the last time I felt like out-sprinting the weekend group ride guys at every opportunity. So I’m giving the bike all the credit.’ The Felt’s quick, light feel, stability and incredibly fast wheels made for a bunch of very racy rides. The new Shimano Dura-Ace components worked flawlessly. The re-profiled brake/shift levers have a noticeably different feel than previous Dura-Ace. The shape of the new levers curve outward, much like SRAM Red levers, which was an improvement, but we were divided on the new shape of the brake hoods. The ?09 brakes seem to have more stopping power, and shifting was quick and positive every time.

The Felt AR Team Issue gave us very little cause to complain, but we had minor nit picks. One rider observed that his legs brushed the laterally-ovalized top tube, perhaps due to the AR’s level-top tube configuration. Few of us came to love the Oval Concepts bars, with their very large, flat-section tops. The ergo/aero shape takes some getting used to, and most likely would work best and fit more comfortably for riders with larger hands. Fortunately for perfectionists, the Felt’s few gray areas are easy fixes.

THE VERDICT
This bike is ridiculously smooth and fast and a blast to ride. We wanted to buzz around pushing big gears all day long so we could go fast. The highly aero looking design led most to ask, ‘why are you riding a time trial bike?’ And, in fact, the AR Team Issue feels as if it slips through the air-just like a TT bike-which is its beauty. Felt gave the AR every attribute of a ProTour road bike-speed, acceleration and nimble handling-and then carved it into a slippery profile to cheat the wind. We had a hard time convincing some that the AR Team Issue was ‘just’ a road race bike-but its speed was all the convincing we needed.