During a two day event, where Felt Bicycles unveiled the new FR racing and VR endurance road lines, Jim Felt was keen on reminding us that the brand was founded on building high performance race bikes; and that premise is still a company priority today.

The new FR replaces the F-series line and focuses on low weight and high stiffness above all else. The VR replaces the former V-series and uses much of the same construction methods as the FR, yet the end goal is a rather different one as its focus is on adding compliance and versatility while still hitting respectable weight goals. For this article we’ll focus in on the FR with a look at how it achieves Felt’s sought after goals, and some thoughts from our first ride on an FR2.

SUB-700 GRAM FR
Lighter and stiffer are two words thrown around a bit too often in bicycle marketing these past few years. Nevertheless, even if that is the case, those are the words needed to describe the new FR, which sees the highest-end FR FRD frame sitting at an amazingly light 685 grams (in 56cm). There are no aero features or eye-catching swoopy lines found on the frame, its simple purpose is to provide the highest level of performance possible in hilly terrain.

The full FR line is quite extensive and includes six levels of the carbon FR: the aforementioned ultra-light premium level FR FRD, then the FR1, FR2, and FR3, which share the same frame level and differ in their build levels. Frame weight for those models is 765 grams. A disc version of the FR1, FR2 and FR3 will also be available, with a frame weight of 854 grams. Two other carbon models, FR5 and FR6, use a different frame than the preceding bikes that brings down the price. There’s six FRW (women’s) build options as well, although geometry is identical to the standard FR frame. And finally, there’s also aluminum models, the FR30, FR40, and FR60. In all, the price range runs from close to $10,000 all the way down to $799.

LIGHTER, STIFFER AND TALLER
The FR has been in the works for the past two years, with Felt engineer Jeremiah Smith heading up the project. “The FR was an easy objective, and that was to build the lightest, stiffest bicycle we could. We could build a bike that’s stiff but weighs too much, and light but not rideable, so we had to find the right balance.” Smith told us in reference to the design impetus behind the frame, “The F1 was a well received bike, ridden in the Tour, so the FR had some big shoes to fill. We had a goal of going sub-700 grams on the frame, but there were also minimum stiffness numbers to hit and we would add material to achieve that. Adding aero features had been discussed, but in the end we decided aero tube profiles aren’t great for stiffness, especially lateral stiffness, and we would have to sacrifice the weight goal.”

One of the areas Felt targeted for improvement on the FR was the rear triangle, which sees a claimed 30% increase in stiffness over the F1 due to changing how the seat stays attach to the seat tube, and going to a wider 386EVO bottom bracket shell. Going to an outboard mounted seat stay design over a standard attachment better handled the torsional load and decreased the amount of torsional stresses going through the seat tube. On top of that, the rim brake version has the rear caliper moved to the underside of the chainstays behind the bottom bracket, which Felt says allows greater shaping and tuning of the seat stays. As for the switch to a 386EVO bottom bracket shell, the additional 18mm in width over a BB30 allowed room to increase the driveside chainstay to further improve torsional and pedaling stiffness, while the left side gets smaller to allow clearance for up to a 28mm tire.

As important as minimizing weight was for the new FR, Jeremiah Smith told us there was something else that Felt dealers and customers were asking for, and that was a taller stack height. “The majority of riders were putting too tall of shim stacks under the stem and losing stiffness, so we wanted to change that in order to better fit our customers.” For a 56cm frame, stack increased by 24mm (572mm stack height), which came from both a longer head tube and increased fork length.

Amenities such as internal derailleur cable routing have been passed by since external routing saves a handful of grams. Rather than making two frames, one for mechanical shifting and the other for electronic, Felt gave the FR a removable cable guide so those using an electronic group aren’t forced to live with unsightly cable stops.

DISC BRAKES FOR ALL
Adding a disc brake version of the FR created the need for nearly a completely different layup than the rim brake version due to the forces placed on the left side of the frame and the fork. “There are different forces involved with disc brakes in both the fork and rear end of the bike. The chainstays need to be built to counteract that force, and the same goes for the fork”, said Smith. As is now fairly standard across the industry, the disc models use a 12mm front thru axle with a 142x12mm in the rear and flat mount caliper brakes.

HOW LIGHT CAN A FRAME GET?
It was only 10 years ago that a 900 gram frame was considered on the cutting edge of how light it could be. Now there are a handful of companies that have gone sub-700 grams, which made us wonder, how low can you go? “We’re starting to approach the limit to how light you can make it and still be safe.” Jeremiah Smith told us. “Going from 900 grams to 800 grams is easy and can be done by optimizing the layup. But going from the upper 700-gram range down to sub 700 is very, very difficult. There are probably a few grams to be had here and there, just going much under 685 is not something I see going a whole lot further.”

GOING FOR A RIDE
Even though the FR is only just now officially being talked about, it has already been at the races for quite some time. Two riders from the Holowesko Citadel-Hincapie team raced it in the Tour of California back in May and received the bikes only the day before the race started. For those of us on hand for the launch, our first ride wouldn’t be anything quite like ripping out a 100-mile stage against some of the fastest riders in the world, but we could be facing some of the fastest cycling journalists in the world? Maybe?

Felt had the FR1 and FR2 models on hand for us to ride on a 45-mile route that consisted of mostly rolling roads out to the coast, then one 2-mile climb where we could get a feel for its ascending ability. I was on the FR2, which comes with an Ultegra Di2 group, Mavic Ksyrium Elite wheels and a price tag of $4,999. Felt got a little creative with the build and didn’t just look for cost-cutting component substitutions, and instead spec’d it with some additions they thought a customer might want, like a power meter. A Pioneer left-side power meter attached to the Ultegra crank comes stock, which retails for $559. Another cool add-on are Di2 sprint shifters pre-installed for an easy way to get another shift location for the rear derailleur.

Even though we weren’t exactly riding mountain passes on the FR2, we still had enough time to form some ride impressions. On the one real climb we did, putting in a hard effort feels about as efficient as it could be. It’s not only down to the fact that the bike is light, but equally as important, it’s very stiff. Unfortunately, the descent back down to the coast wasn’t especially technical and didn’t allow much opportunity to get a feel for the torsional stiffness, but we did get to test the brakes. We’re always a little leary of brakes mounted under the chainstays because we’ve experienced wheel rub and less than stellar power on some of them in the past. This time there was none of that and the TRP caliper modulated and stopped as well as any seat stay-mounted brake.

Once we’re able to spend some more time on the FR we’ll have a complete ride review. And be sure to check back for the first ride review on the VR endurance bike. 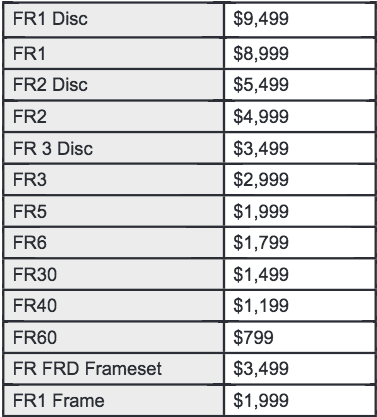 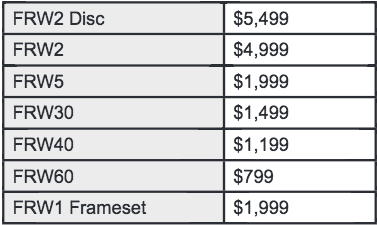 Uphills or Flats: Which Makes You a Stronger Cyclist?