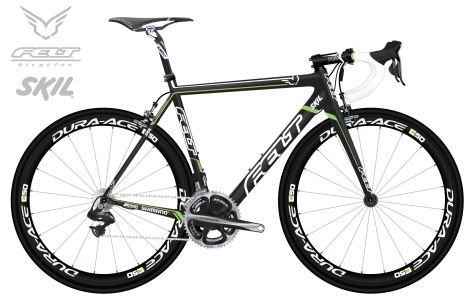 Share
On day two of Interbike, Felt Bicycles announced that they’ve signed a multi-year sponsorship deal with the Dutch-based Skil-Shimano professional cycling team. Company namesake Jim Felt was on-hand to personally make the announcement.
“We looked hard and long to find a team that we could partner up with in order to help further develop our technology,” said Felt. “Skil-Shimano is a young team with lots of potential. They’re going for a Pro Tour license and will be a terrific partner for Felt and all of the team’s other sponsors. This will be Felt’s research and development team.”
As the team’s co-title sponsor, Shimano will be supplying Dura-Ace Di2 components for all of the riders’ F1 road bikes and DA time trial bikes. “As of now, the team has only requested F Series bikes for road,” said Felt’s marketing manager Doug Martin. “We’ll make everything in our line available to them, and it’s an exciting time because they have some great riders getting results like Marcel Kittel and new additions like Patrick Gretsch [from HTC-Highroad].” 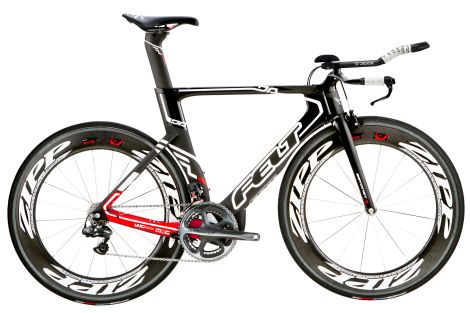 For time trials, the Skil-Shimano team will ride Felt’s 2012 DA. Team bikes will be spec’d with Shimano’s own wheels, however, as opposed to the Zipp wheels featured on the production version of the DA.

And now for the official word from Felt…

FELT TO SUPPLY SKIL-SHIMANO BEGINNING IN 2012
Pro Cycling Team to Ride Felt Bikes for Next Three Years
September 15, 2011 (Las Vegas, Nevada) ? Felt Bicycles and Skil-Shimano professional cycling team have signed a multi-year sponsorship agreement, forming a partnership that is dedicated to competing at the highest levels of pro cycling. The sponsorship, announced today at Interbike, forms a powerful alliance that combines Felt’s advanced bicycle designs with Skil-Shimano’s world-class cycling program.
As the official frame sponsor of Skil-Shimano, Felt Bicycles’ will supply all necessary road and TT framesets beginning in 2012 and through 2014. Skil-Shimano will begin the ?12 season aboard Felt’s technologically advanced F-series road race frames and the wind tunnel-engineered UCI-legal DA time trial frame.  These flagship models are built with Felt’s finest UHC Ultimate+Nano carbon fiber and each comes with a World Championship winning history.
‘We are elated by the opportunity to work with Felt Bicycles,’ said Skil-Shimano’s general manager Iwan Spekenbrink. ‘When we began our search for an equipment supplier, we did so with the goal of racing against the fastest riders in the world in the biggest races in the world. In this competitive environment, every advantage is critical. We know Felt’s industry-leading aerodynamics expertise and carbon fiber design methods will give our athletes an edge over the competition every time we line up.’
Skil-Shimano recorded impressive results in its 2011 campaign, accumulating 21 wins including a Grand Tour stage victory at the Vuelta, and is determined to succeed at the highest level of cycling. Although the entire 2012 roster has not been announced, it is clear that the 2012 team will be the strongest Skil-Shimano team yet assembled. The nucleus of the team is formed around Tom Veelers, Alexandre Geniez, and an emerging trio of German riders ? Marcel Kittel, John Degenkolb, and Patrick Gretsch.
‘From our perspective, there is no team out there that offers the opportunities that Skil-Shimano provides our company,’ said Felt’s founder and namesake Jim Felt. ‘The roster that they have put together for 2012 is a powerhouse loaded with young talent. With such a promising core of riders, an innovative staff, and a professional women’s cycling component, Skil-Shimano is truly a dream program for Felt’s return to the European race scene.  We are excited to be back racing at the highest level and thrilled to be with Skil-Shimano.’
About Felt Bicycles
Felt Bicycles is a leading designer, manufacturer and distributor of its own proprietary premium quality bicycles, framesets, components and accessories.  The company’s U.S. office is in Irvine, California, and its European office is in Edewecht, Germany.  Felt Bicycles is an internationally recognized brand with bicycles and products sold in more than 30 countries worldwide. Athletes on Felt products have won numerous events including World Championships, Olympic Games, ESPN X-Games and other major national and international competitions. For more information on Felt Bicycles call (949) 452-9050 in the U.S. or (49) 4405-928015 in Europe, or visit Felt online at www.feltbicycles.com.