The talk was of new builds, new technology and an all-new logo 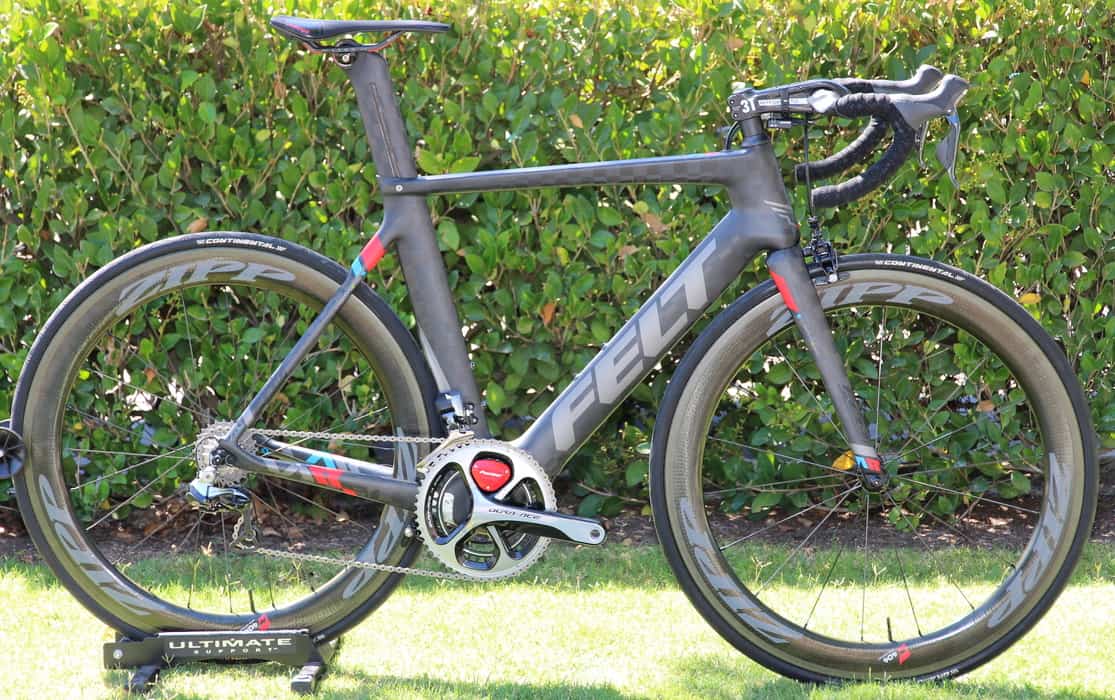 Felt Bicycles hosted its annual Media Day at its Irvine, California, headquarters this week, with the company’s entire range of upcoming 2016 road, mountain, cyclocross, track, cruiser and electric bikes on display. While the road line is devoid of any major overhauls, there are plenty of new complete builds and paint schemes, as well as some tweaks in carbon layups and manufacturing processes. Felt’s three most popular road lines–F Series, AR Series and Z Series–remain intact, while the popular women’s ZW Series and V Series of adventure road bikes see some expansion. And although the core of Felt’s lineup of road bikes hasn’t changed dramatically for the 2016 model year, the company is ushering in a new era for itself in other ways.

Looking for more 2016 bikes? Check out our coverage from the Interbike trade show!

“This, 2016, will be the last model year for Felt Bicycles,” said General Manager Michael Forte. “After the 2016 model year wraps up, we’ll be implementing what we call ‘The Living Line.’ And what this means is that new product will be launched when it’s ready. We won’t be rushing to complete product for a particular event, and we won’t hold protect for a specific trend to emerge in the marketplace. Product will continue as long as it is relevant, and it will be replaced when necessary. And we’re doing this in order to create better products, because going forward we’ll be more focused on research and development and be able to devote our resources and our time into investing in better product. The Living Line will also allow us to have better control over our inventory, thereby helping our dealers by ensuring that product is more readily available and taking the burden of discounting the previous model year’s merchandise in anticipation of ordering new models for the upcoming year.”

In addition to announcing their new Living Line product development model, Felt officially unveiled a new logo. “We felt like it was time to give it a refresh, time to bring things into a more current state and create something that would be more contemporary and also stand the test of time,” said Felt’s Sports Marketing Director Doug Martin. “We see this as a new chapter in our history.” As for the bikes, feast your eyes on some of the highlights of Felt’s 2016 line.

The AR Series remains Felt’s aero-road line for model year 2016, but Felt’s Road Brand Manager Dave Koesel reminded us, “Felt introduced our second generation of carbon aero road bikes in 2013 for the 2014 model year, and aerodynamics have always played a big role in the development of our bikes.” The latest AR bikes still feature several of Felt’s signature technologies that include the Internaloc seatpost clamp design that allows for a flattened aero shape without the need to overbuild the actual septets to resist the circular clamping forces found on traditional seatposts. The AR bikes also feature a chain stay-mounted rear brake which frees up the seatstays from handling braking forces in order to enhance both aerodynamics and vertical compliance. And three of the latest AR builds–the flagship AR FRD (above), AR1 and AR2–feature Felt’s top-of-the-line Textreme carbon in their respective layups.

Six frame sizes will be available in five complete bikes and two frame kits. And, interestingly, all of the AR bikes come with size 23mm Continental Grand Prix 4000 tires. In their tests at the San Diego wind tunnel, Felt engineers discovered that the Grand Prix 4000 tire performed the second-best aerodynamically of all the models they tested. Which tire performed the absolute best? Felt’s own TTR1 model. But Koesel admitted that the Continental tire offers “better handling characteristics” and, thus, they were selected for the AR Series.

The F Series is Felt’s high-end race bike with traditional tube shapes, and it has the highest stiffness-to-weight ratio of all of their road bikes. The F bikes will be available in six sizes and four complete builds (priced from $2499 to $6999), as well as two frame kits ($1999 and $3999).

The Z Series was introduced in 2005 and has been a perennial bestseller for Felt. The Z bikes feature more tire clearance and added compliance features compared to the F Series and AR Series bikes, but were “still designed to be ridden at the highest level,” according to Koesel. “The Z Series has been used by riders at Milan-San Remo, the Tour de France and even the Olympic Games, but the primary goal for us in developing the Z Series is ride quality and comfort for the long haul.” The Z Series can be had in five frame sizes and six complete builds in carbon fiber, as well as one frame kit. Interestingly, all of the carbon bikes in the Z Series feature the same layup and performance, but with different component selections, and they’re priced from $1699 to $5999. And there are several disc brake-equipped models in that range, as well.

Along with the unisex Z Series, Felt also offers the women’s-specific ZW Series of endurance road bikes. “But these are not just re-painted Z bikes,” says Koesel. “The ZW Series are made using their own frame molds and frame metrics, and have specific component selections design for female riders, even unique wheel builds. And when we asked our female focus groups what they wanted in their next road bike, they told us, ‘Disc brakes and electronic shifting.’ So you’ll find both of those on our 2016 ZW bikes.” There will be four frame sizes available for the ZW Series in two aluminum bikes and six carbon bikes priced from $819 to $4999.

Felt introduced the V Series of adventure road bikes last year and it included two builds. For 2016, those two bikes carry over and a third model has been added. All of them are built around an aluminum frame and come with disc brakes and plenty of tire clearance (the rear can fit up to a size 42mm tire while the fork can house up to a size 45mm model). Seven frame sizes will be available, and the V Series will run with retail prices from $999 to $2199.

WHAT IS SHIMANO GRX? IS IT BETTER FOR GRAVEL?