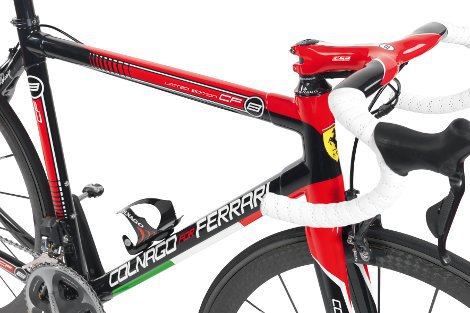 Of the many facets of Colnago history that Mr. Colnago has always seemed especially proud of, it’s his partnership with Ferrari. For Ernesto, it began in 1986 in the town of Maranello – the city of Ferrari  – when he first met Enzo Ferrari. It was at that meeting the Ernesto claims he learned one of his most important lessons in life. When Mr. Ferrari asked Mr. Colnago how old he was, the famous bike builder replied that he was 54 and perhaps slowing down a little at such an “old” age. Mr. Ferrari responded by scolding Ernesto, “Shame on you! I started Ferrari when I was 54 and they were the best years of my life.” 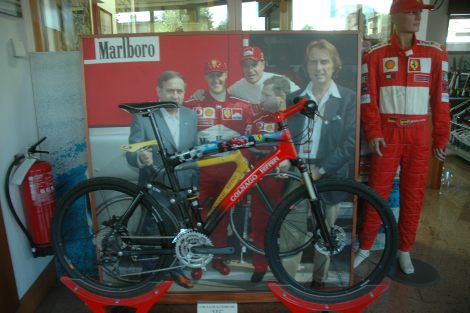 As Mr. Colnago recounts in his book, “Colnago – The Bicycle”, “I remained silent. I had learnt my lesson. Today when I’m a little down, if I’m in a bad mood, I look at the photo of (the 88 year old) Enzo and I remember those words, “Shame on you!” and I move forward.”

As we stood in the Colnago museum looking at the early Ferrari bike, Mr. Colnago confided in me that it was Mr. Ferrari himself who pushed Ernesto to begin working with carbon fiber. Most surprising was the story that the idea behind the Colnago signature straight fork also came from the engineers in Maranello as the straight fork did a better job damping road shock than a curved fork.

And so it was that as we descended on the escalator to the show floor in Milano last weekend, there was Mr. Colnago standing next to his newest Ferrari bikes; the CF8 road bike and the CF9 hybrid – the collaboration of two of Italy’s greatest icons of design and performance lives on! 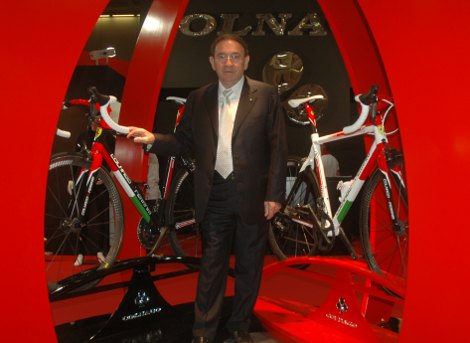 The master himself – Ernesto Colnago. Mr. Colnago is immensely proud of the 25 year old relationship with the famous Italian auto maker and it has produced some keen new technology for the bike maker over the years (see below). 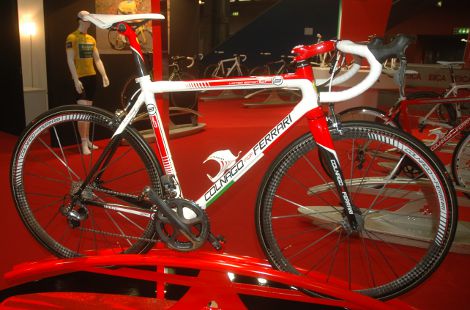 For 2012 Mr. Colnago is especially proud to celebrate the 25th anniversary of his collaboration with Ferrari with the release of two new bikes – the Limited Edition CF8. The bike is based on the C-59 frame that uses a Shimano Di2 drivetrain with the internal battery mount. 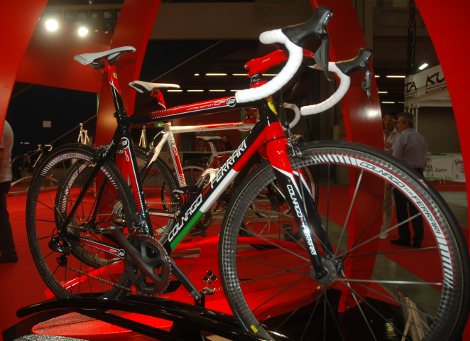 Here’s the black version of the new Ferrari bike. Only 200 of these bikes will be built (100 in each color).
The retail price for the bike has yet to be set…don’t plan on it to be cheap. The standard C-59 frame is the # 1 seller in America for Colnago and it sells for $5900. 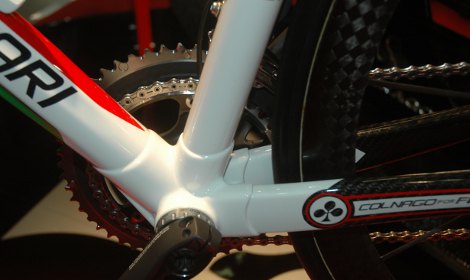 The best Colnago frames have always used lugs, and so it’s no different with CF8. Lug construction is also the best way to allow for a whopping 20 different frame sizes in both sloping and flat top tube shapes. To best illustrate the real meaning of  “Made in Italy”, the C-59 carbon tubes are sourced from the Veneto region of Italy and each frame is handmade in the basement factory of Ernesto’s house – it doesn’t get more personal than that! 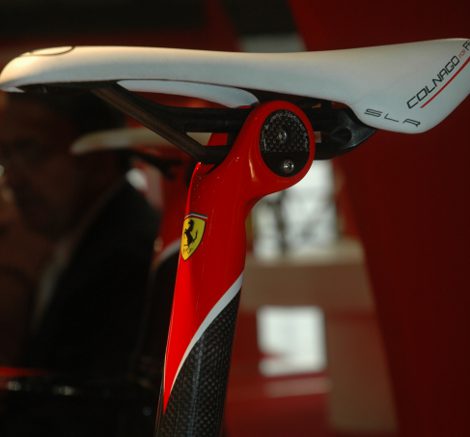 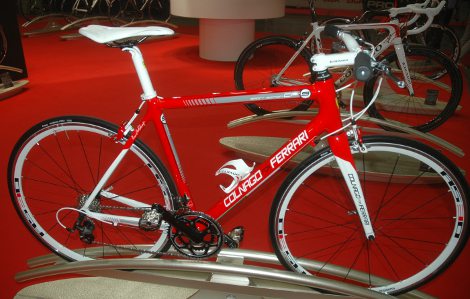 And what is probably the most exclusive and expensive city bike in the world, here’s the hybrid CF9 version of the Colnago Ferrari. The bike runs with Shimano wheels, Vittoria tires and a ten speed Shimano Ultegra drivetrain – perfect for spinning laps in the cul-de-sac! Surprisingly, Colnago plans to make 200 of the CF9 bikes. 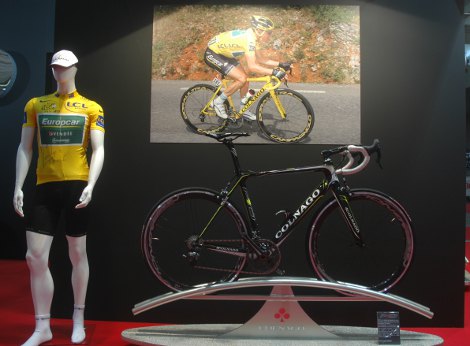 The Colnago brand has won every major race there is to win – except one. Once again, the grand Italian marque was unable to seal the deal and wear the yellow jersey in Paris. Mr. Colnago was nonetheless very proud of both the Team Europcar stage wins (marking the 23rd year of Colnago stage wins at the TdF) and the many days that Thomas Voeckler spent in yellow this year. The Europcar team uses both the C-59 and the M10 models as race bikes. 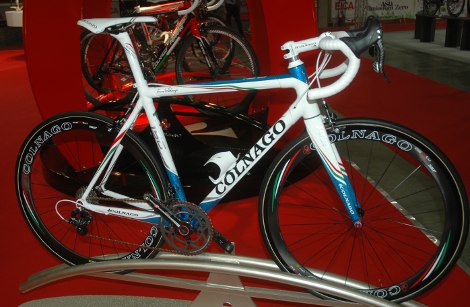 As beautiful as the Ferrari bike is, this limited white/metallic blue model with tri-color highlights celebrating the 150 years of Italian history was a real standout. For more Colnago. 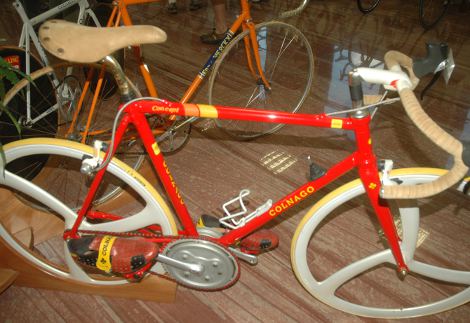 This is the first product of  the Colnago/Ferrari partnership was the Concept bike in 1987. Standout features include the hydraulic brakes and single Ferrari inspired downtube shifter that operated the internal gears located in the chainrings. 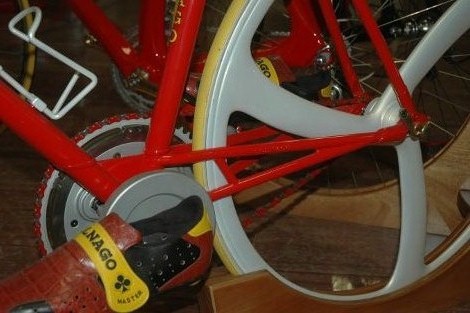 The trussed chainstay and internal geared “desmodromic” chainrings were pretty advanced at the time. Mr Colnago said that it was Enzo Ferrari who said he should build a carbon tri-spoke wheel. 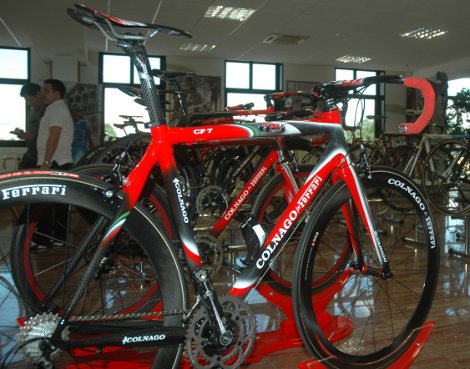 The CF7 was the previous Ferrari bike that Colnago produced. 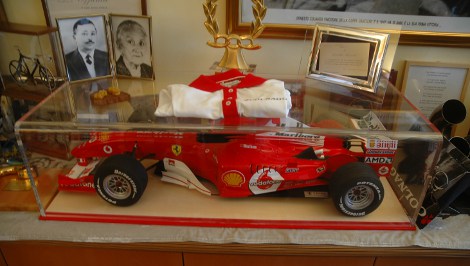 This is just one of the many Ferrari keepsakes that Mr. Colnago has spread around the factory.

Being There: Milano Bike Show, Pt. 1

Breaking Down The Tour de France