What's sleek, stiff, quick, and blue all over? 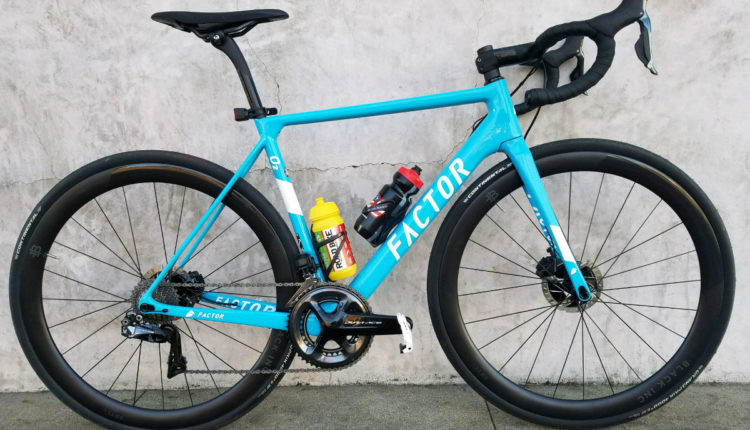 This is our second First Look at a handful of bikes that will comprise the test fleet for our annual Euro issue of Road Bike Action. Here’s what you missed with our First Look on the Cipollini Nk1k.

Like so many other Euro bike brands looking for traction in the American bike market, Factor has struggled to gain some notice. Over the years though, there have been two factors working in their favor. One is the unique frame designs originally seen on a model called the Vires Vries. With it’s twin spar fork and split-tube downtube, it definitely stood out. But that was four years ago and before the brand went through some ownership ups and downs.

In 2017 the reignited company sought to make a comeback, to make a stand, to be seen and heard.  And as has happened with so many other companies prior, all it took was a team sponsorship to make it happen. Mid-way through the race season they found themselves on a truly oversized stage when they arrived on the World Tour circuit as the bike sponsor for the French Ag2R La Mondiale team. Come the Tour de France, more eyeballs came their way thanks to the team’s aggressive tactics and a big stage win (and eventual third overall) by Romain Bardet.

Factor is now ramped up with bikes ready to be shipped direct to the consumer. Frames for the 02 model sell for $4999 with the highest priced complete bike topping out at $11,250. As our test bike rolled with a full compliment of Shimano Dura Ace Di2 parts, hydraulic brakes and Factor’s own Black Inc. wheels, the price rose to a whopping $11,050.
www.factorbikes.com

FACEBOOK VIDEO: THE FACTOR O2 AT THE MONTROSE RIDE

The Montrose Ride aboard the Factor Bikes 02 with their own Black Inc wheels and bar/stem combo with sweet Dura Ace Di2 drivetrain and hyrdo disc brakes from Shimano-Road with help from fi'zi:k and Continental Road Cycling. Ride often, ride safe. #bikelivesmatter

Photo of the Day