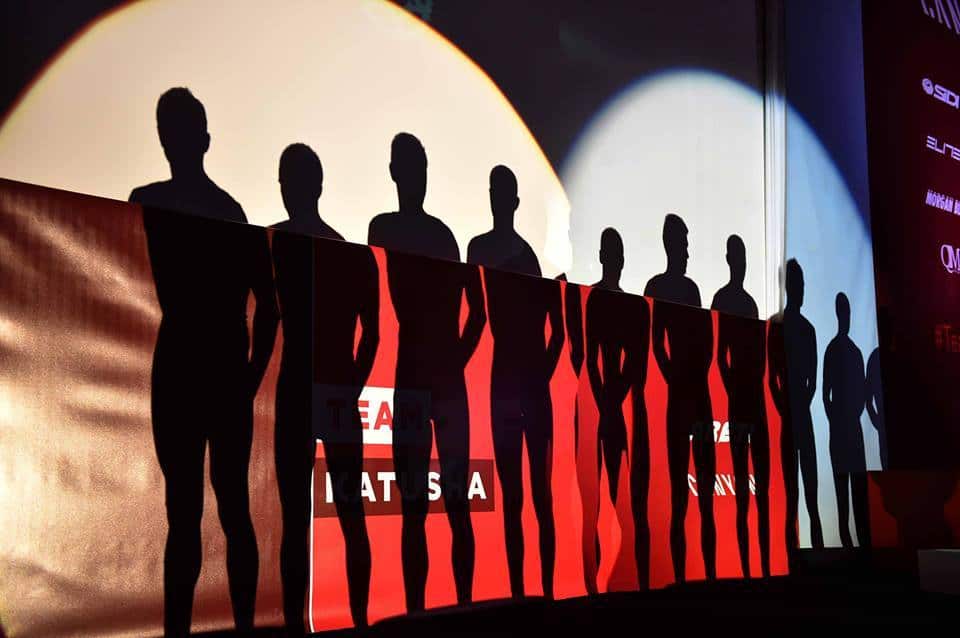 In front of an enthusiastic crowd of some 200 sponsors, journalists, friends and family, the 2016 Team Katusha and innovative new company Katusha Sports were presented in Calpe, Spain on Saturday evening.  The collaborative effort between the cycling team and the soon-to-launch cycling clothing line received a warm response for the upcoming ambitions and goals. 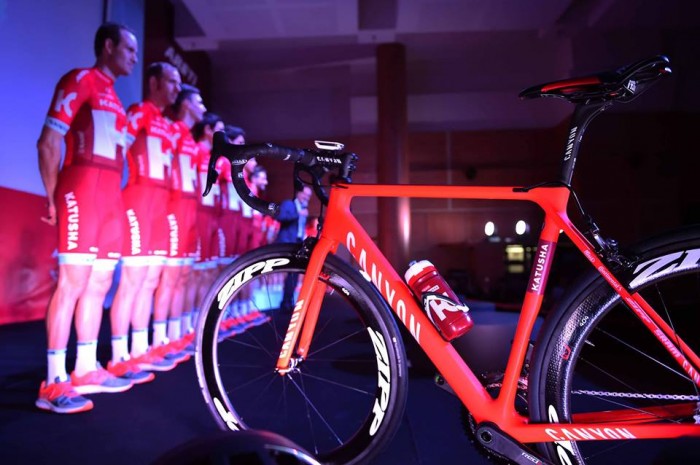 With the picturesque waters of the Mediterranean lapping the nearby coast,  28 riders from twelve countries were presented for the newly branded WorldTour team as  Team Katusha declared the 2016 season open.

Before moving into the new season, however, Team Katusha looked back at the most successful year so far in the seven seasons of racing for the current UCI second-ranked team.  An exciting video highlighted the stunning season of 40 wins and 103 podium placings and set up the opportunity for General Manager Viacheslav Ekimov to praise the past but now look to the future of Team Katusha. 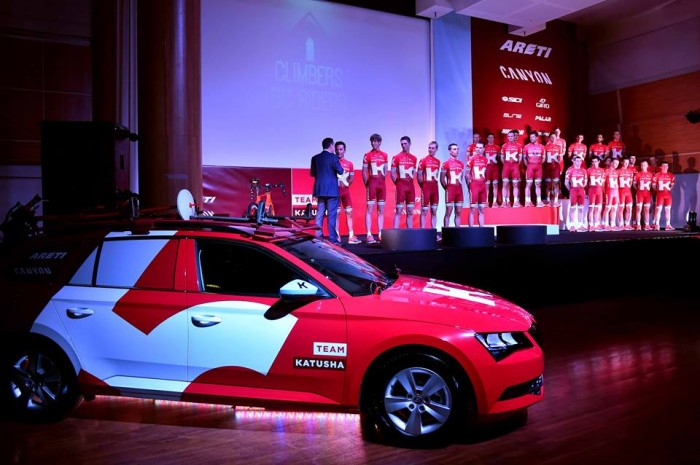 Ekimov:  “We only missed a few points to be the number one team in the world and this gives us motivation to strive for more.  We know we can do even better in 2016, in particular improving our Team Time Trial skills.  We are working on this by setting a clear target for 2016 – to be top 5 TTT at the World Championships. We are again ambitious for Overall podiums in GT races, having guys like Rodríguez, Van den Broeck and Taaramäe. And of course we have a super train for our absolute leader Alexander Kristoff, hopefully resulting in more wins in one-day WorldTour races or stages.”

The six featured riders of Jurgen Van den Broeck, Simon Špilak, Joaquim Rodríguez, Ilnur Zakarin, Rein Taaramäe and Alexander Kristoff arrived at the podium on their bikes, outfitted in the 2016 Team Katusha kit which features a predominate ‘K’ on the front and back in new colors of coral, sangria and blue.  Van den Broeck and Taaramäe both spoke of their excitement for new opportunities and already fitting in with their new teammates, while Špilak and Zakarin both recalled their surprising and well-deserved wins in the past season, with Ilnur revealing he will ride the Giro d’Italia with ambitions of a high overall result.

The final two interviews started with team leader “Purito” Rodríguez, who will focus once again on the Ardennes classics, the Tour de France and the Vuelta a España as he looks for another successful season.  And finally the most winning rider of the season, Alexander Kristoff, spoke to the crowd.  In addition to reflecting on his year of winning, Alexander Kristoff was pleased to announce that the team will travel to compete in the USA for the first time and will race in May’s Amgen Tour of California, a race he will use in his preparation for the Tour de France.

A short interview with team owner Igor Makarov was followed by a special presentation by Rodríguez of the new 2016 jersey and ended with Kristoff giving his bike to the man who makes it all possible for Team Katusha.   “I am sure that our team has not reached its maximum yet.  We all, of course, are waiting for new highs in the new season,” Mr. Makarov said as he accepted the gifts.

The last introductions were made in groups with the Time Trial Specialists, Allrounders, Sprinters and Climbers coming onto the podium to discuss their 2016 ambitions before a final round of applause rang out for the 2016 team of riders.

Also on hand were the five of the six sports directors, headed by José  Azevedo.  Azevedo is pleased with what has been accomplished with the team and knows more good things are in store for Team Katusha.
“When I see all of these riders I am not only happy, I am very proud. We talked already a lot about last season but I look forward. We’ve worked hard these two weeks in Calpe and I saw that all 28 riders are hungry to make 2016 even better than last year. The number of victories is not so important, but the quality counts. A podium in the Tour, a World or Olympic title, it looks difficult, but you need to be ambitious. We will prove that we deserved to be the best team in 2015. We have the best riders and the best staff people. We all work for the same goal and we will succeed, I am sure!” 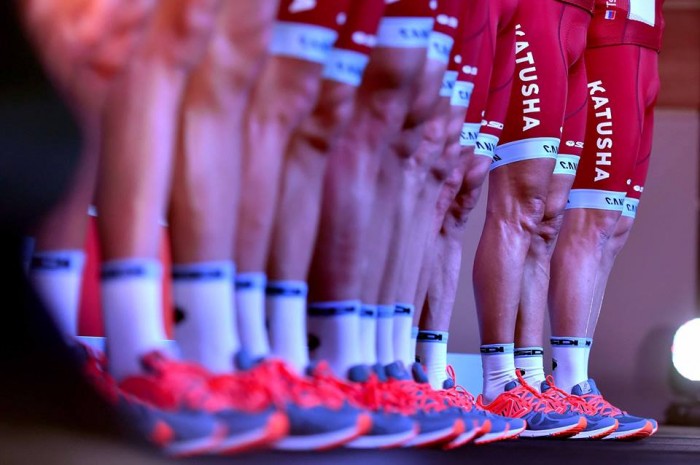 The team presentation was also used to announce the launching of new company KATUSHA Sports which will premiere a men’s performance line of clothing around the time of the Ronde van Vlaanderen in April, with a Men’s and Women’s urban cycling collection coming in Fall.  The innovative and contemporary brand will be available online as well as with selected premium retailers.