Designed for the sprinters, made for the rest of us 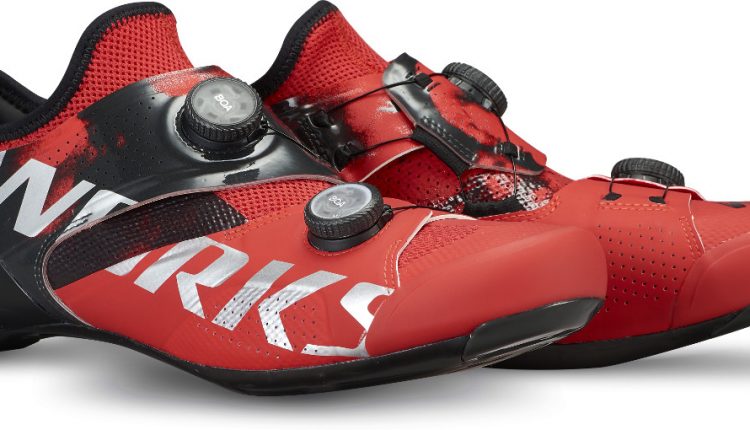 Although not used in the pro peloton until late in the season at the Vuelta a Espana, the new Ares shoe from Specialized has nonetheless seen plenty of pro-level footwork as Tour de France green jersey winner Sam Bennett played a key role in the shoe’s development.

The $425 Ares joins a trio of performance togs from Specialized including the $425 Vent,  $400 S-Works 7 and the $424 Exos, all which remain in the line. Although the Ares retain a double-Boa enclosure like the Vent and S-Works 7, it is all-new from the carbon sole on up. The shoe’s upper sandwiches lightweight Dyneema material between layers of synthetic and TPU to create no-stretch zones.

Probably the most distinctive feature is the patent-pending design of the new strap that triangulates retention across the midfoot and “wraps” around the heel to minimize slippage and maximize a snug fit  – the sort of fit that only a Tour de France finish sprint winner like Sam Bennett could appreciate!

Mid-way through our Zoom call with the Specialized footwear crew, we got a surprise interloper in the way of Sam Bennett himself. Sam was taking some time out of his training camp duties to tell us his own version of how & why the shoe was developed.

According to the Quick-Step team rider, he told how when it came to gearing up for an out-of-the-saddle finish sprint with previous shoes he would have to claw his toes into the shoe to get needed traction to maximize his power output. “The Ares does exactly that for me, in fact, you almost feel lazy in the shoe!”

During the presentation, Specialized showed plenty of slides to establish the R&D effort that went into the shoe which included everything from scrappy modeling of foot shapes to analyzing how the bike/rider angle was altered during a sprint. As Specialized’s Todd Carver reminded, “A shoe doesn’t give power, but it can lose it!” And so they spent many hours optimizing the efficiency of the closure further down the foot instead of just over the top of the forefoot.

When it came to the real-deal world of comfort and performance and how the new Boa Li2 adjusters play a role, Bennett shared some interesting tidbits on how it all plays out in what he called the “torque application in the sprint”. “Normally I run the Boa’s loose before tightening them up for the sprint. Usually, the shoes will have max tension for between 15-25k out. There was one stage last year where I had to be done and ready at 50k out….I couldn’t stop to make adjustments or I would’ve lost ten places. If you can be comfortable and tight at the same time, it’s a good thing and that’s what I have with the Ares.”

Unfortunately, due to a mix-up in size requests, we weren’t able to ride the shoes in time for the official release, but Specialized has a new pair headed our way for testing. Our pair of size 44 shoes hit the scale at 515 grams (Specialized claims 440 grams for size 42).

Although our shoes were soon to be returned, we did slip them on anyway and the amount the retention opens was impressive and needed. The sock-like structure is fairly tight so two hands are needed to get into these shoes, unlike the S-Works 7. We were also shocked at how the shoe really secured the foot even with minimal retention. The angles and unique cabling seem like they will work well and if you like lots of tension they seem to offer it. With that said, while  we often wear size 44 shoes, the Ares seem to have much more room in the toe box. So much so that we felt that it wouldn’t be a good representation of the shoe and a 43.5 will arrive soon.