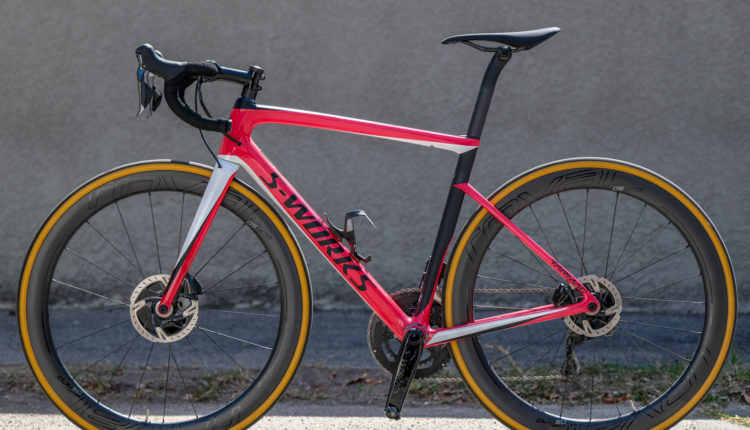 Specialized had a soft release of this bike back in the summer but now its official. The New Tarmac Disc is available with lots of improvements over a bike that was already an amazing and proven race machine. The frame is aero-optimized but not an “aero bike” leaving it more aerodynamic than the original Venge.

The frame weighs in at an impressive 800 grams (same as the rim version released in the summer) and features the new compact rear triangle. This helps improve lateral stiffness no matter the frame size. The carbon layup and tube shaping are size specific as well as disc specific with over 500 precisely cut and shaped pieces per size. There are three different forks offered depending on the frame size, offering a more accurate and tuned ride. 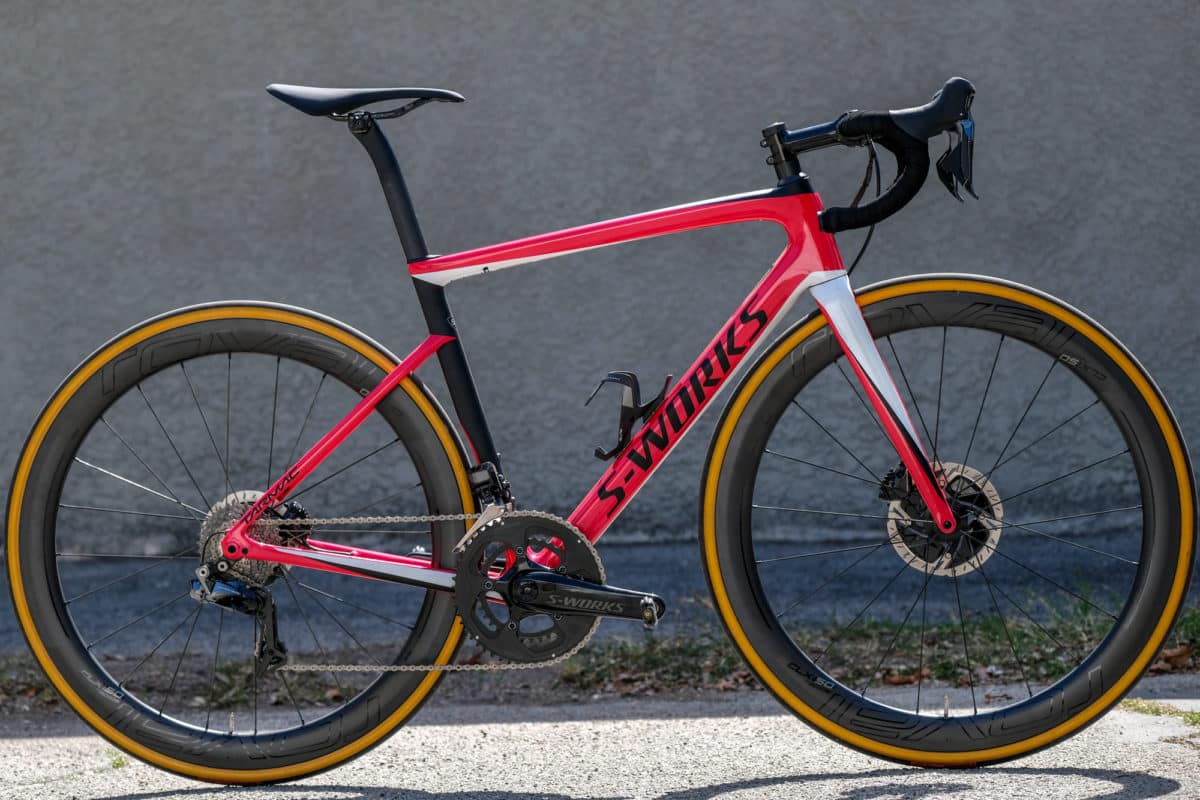 Our S-Works test bike has Shimano Dura-Ace Di2 and the new S-Works power meter. We tested the power meter in the summer with the rim brake version of the Tarmac but now it comes stock on this bike. This was one of the biggest hold-ups on the release of the Disc Tarmac as Specialized wanted to ensure their entry into the power meter market was accurate and a strong offering. This double-sided carbon crank is only 30 grams heavier than the non-power version as each unit is 15 grams. 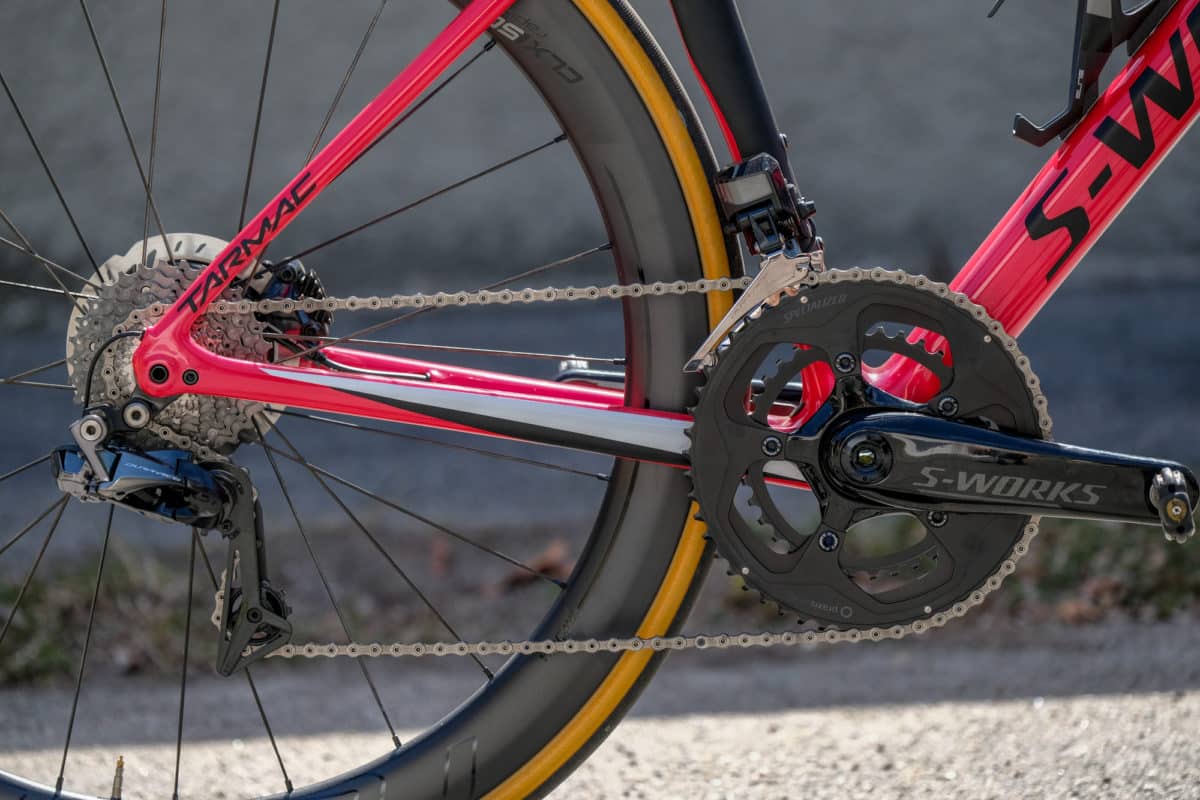 Flat mount hydraulic disc brakes and a 12mm thru axle for the rear.  The hub spacing is 142mm so aftermarket wheel options are easy to find if needed. 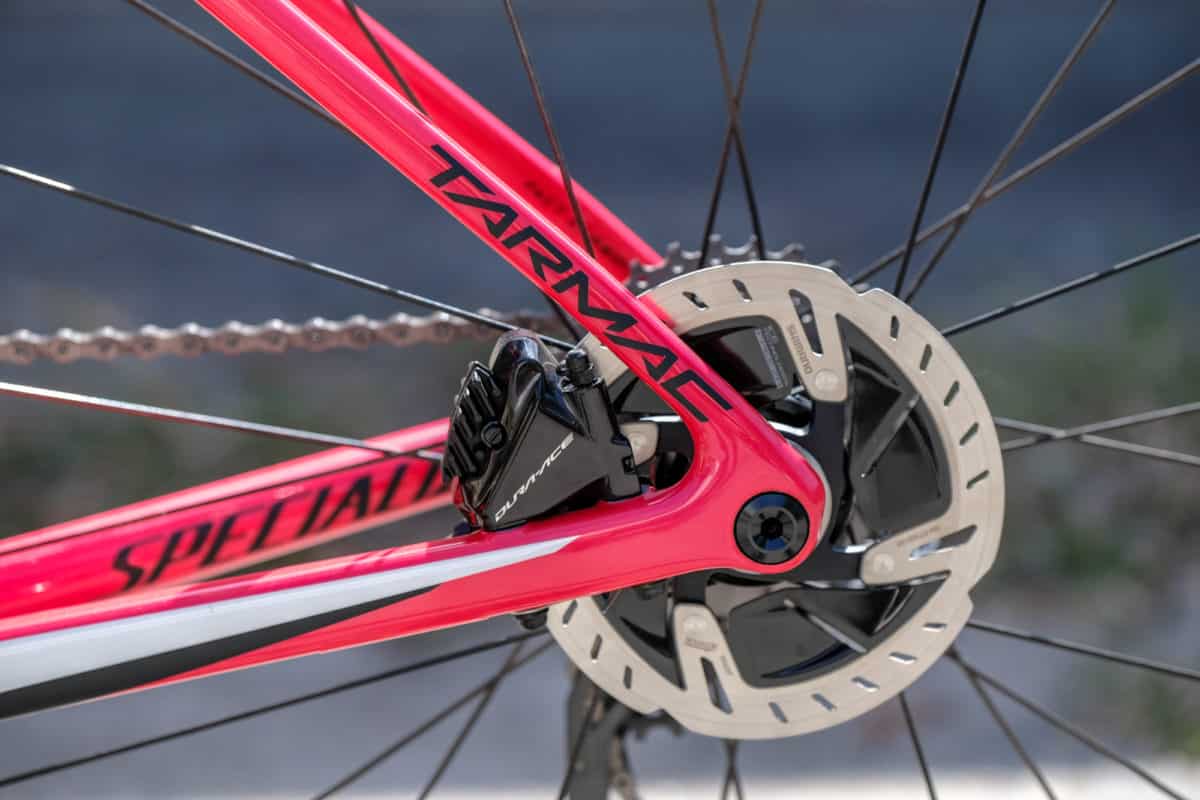 The frame and fork will fit up to 30mm tires and the 26mm turbo cotton tires ride like a dream. They are fast but what you gain in speed and ride quality you lose in durability and puncture protection. The CLX 50 wheels with CeramicSpeed bearings and DT Swiss internals are tubeless-ready.  The S-Works markings will set you back considerable coin but the color combo we received is in our opinion, sweet. 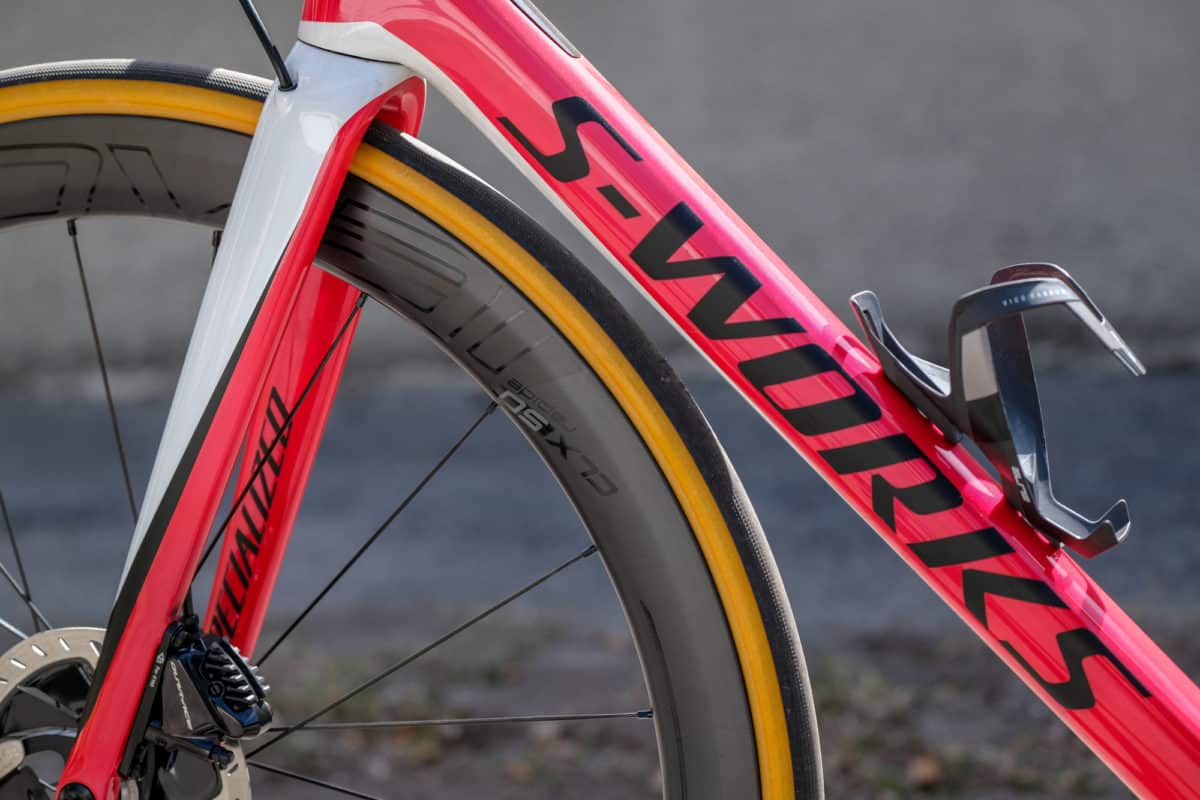 The seatpost has a D shape to it and the top 100mm is tuned for backward motion. This adds compliance while in the saddle without affecting frame stiffness and efficiency. It is held in place by a wedge but be careful if removing the post because the wedge can and will fall into the frame. 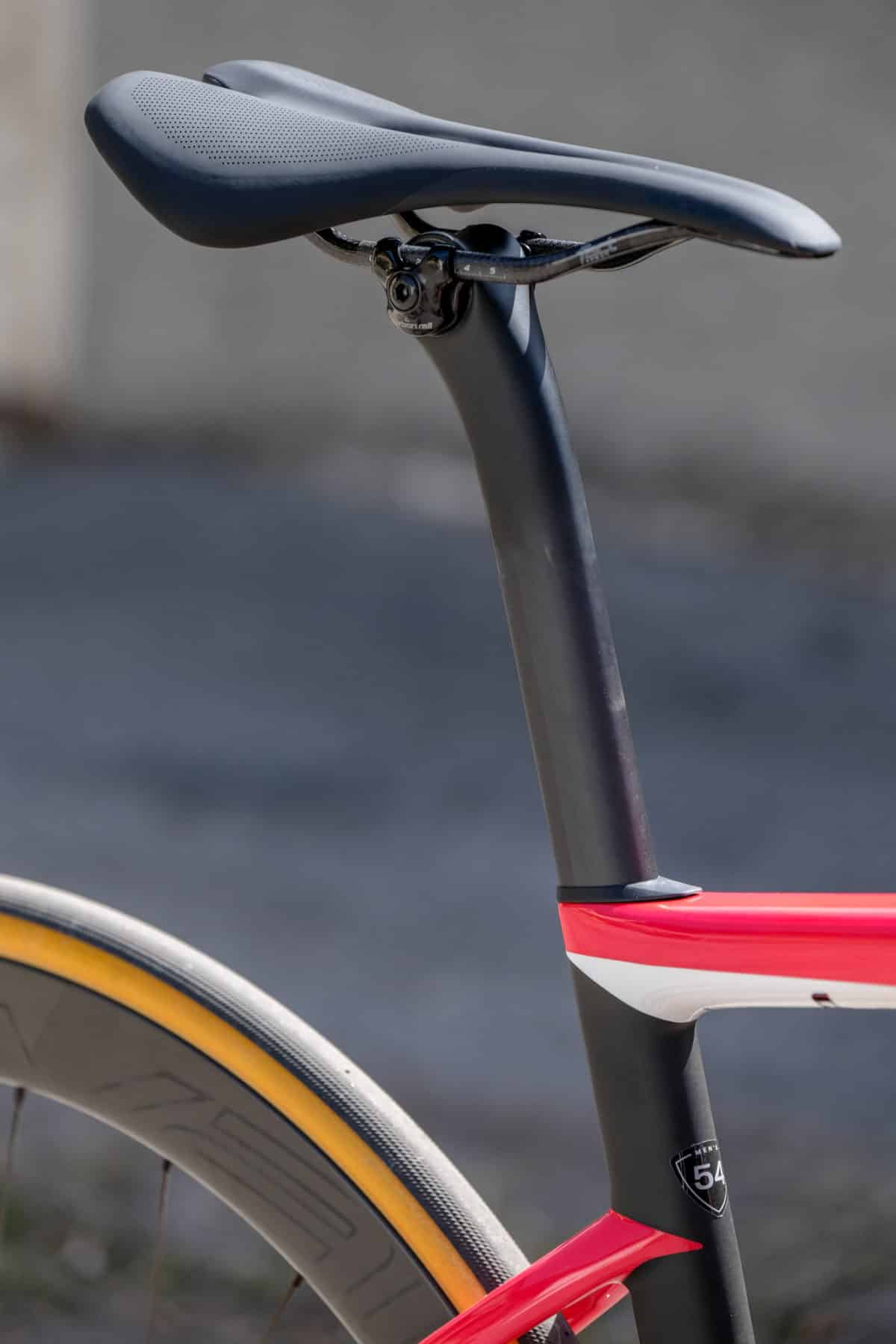 The photo below shows the drive side power sensor between the two chainring bolts. It is attached to the inside of the arm and transmits to the left side. 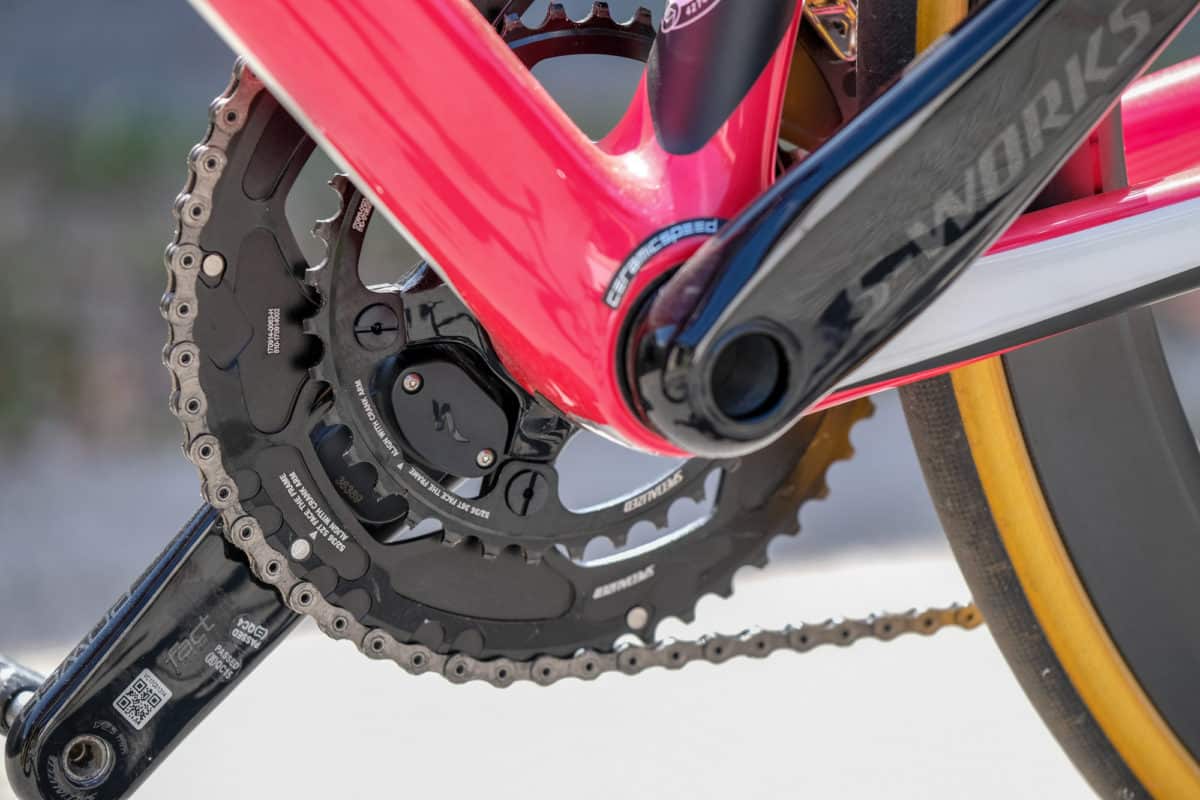 The left arm sensor is the master unit and records left side power as well as transmitting both sides power data over ANT+ or Bluetooth to compatible head units. 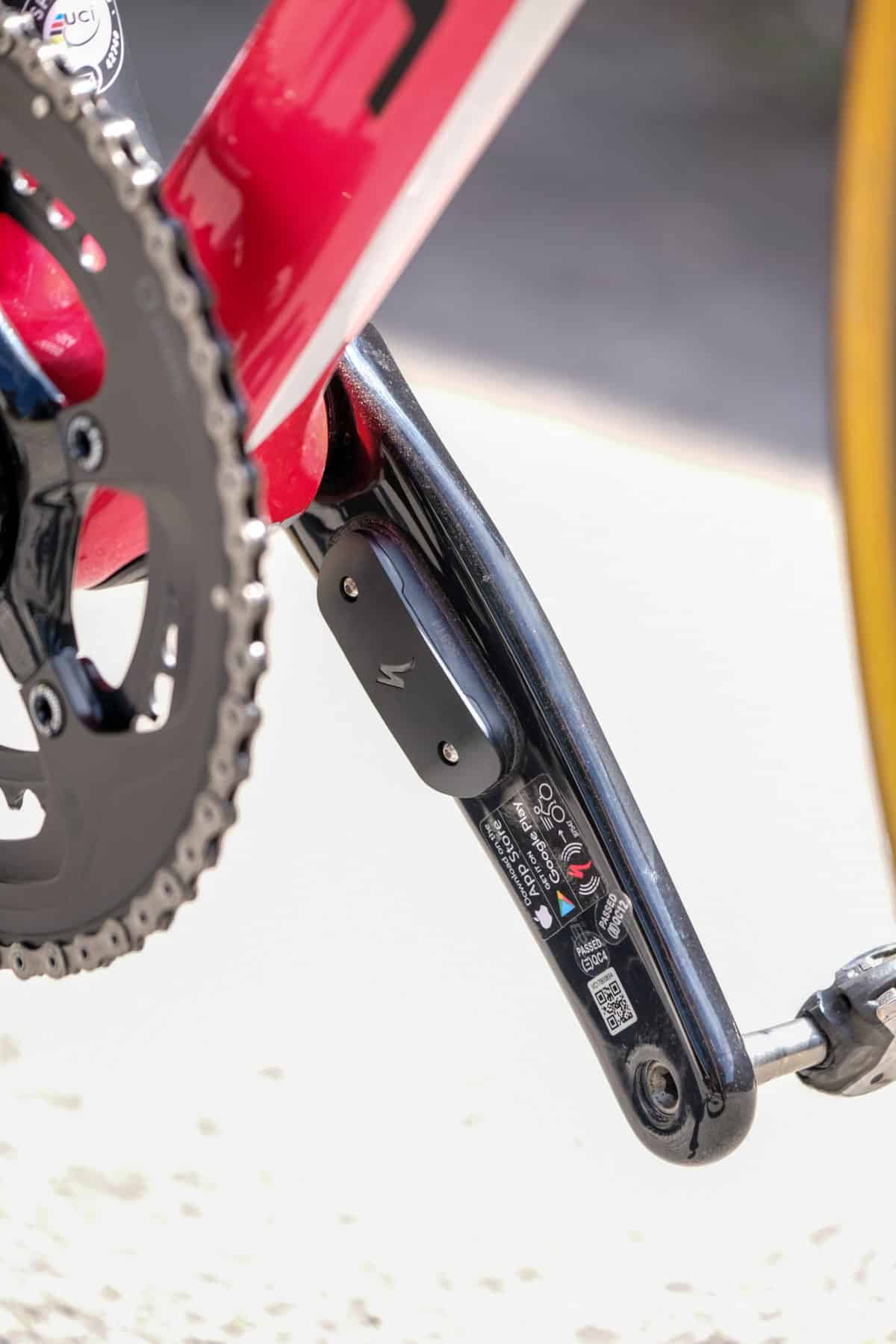 Overall the New Tarmac Disc is one of the best full race packages on the market. Disc brakes mean confident braking wet or dry, increased safety and control as well as superior stiffness thanks to the combination of thru axles. The fact that it ships with a dual-sided power meter offering true balance and total power puts it leaps above the competition. No integrated bar/stem means riders can fine-tune their reach without compromising their fit relative to the bottom bracket.

At 14.87 pounds the S-Works Tarmac disc isn’t heavy and with our version sporting multiple colors there is at least 200+ grams in paint. When asking Specialized about paint they told us that Peter Sagan’s custom paint adds 300-400 grams. This might seem outrageous but as they put it “his bike is still under regulation weight and we have to add weight anyway.”

For more info on the power meter click here and keep a lookout for the full bike test in the magazine soon.