The performance SUV of road bikes? 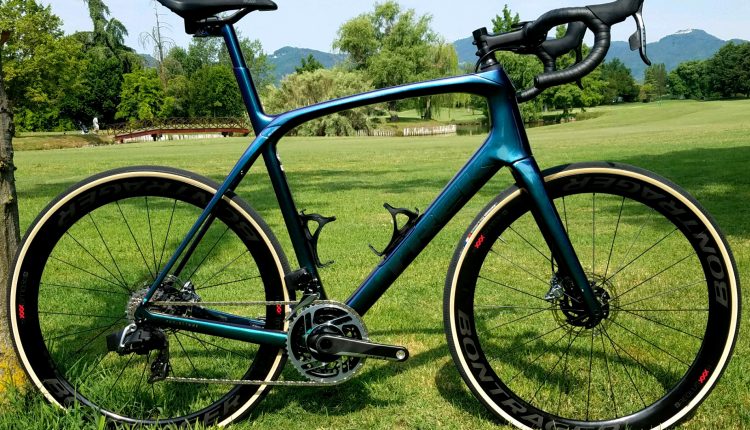 During the first week of the Tour de France Trek Bicycles invited a horde of journos from around the globe to help kick-off a bike sales meeting with their top dealers from Europe. The two day slam-fest took place not in France, but Italy and was highlighted with news of a not only some new e-bikes, and mountain bikes, but more importantly, a newly revitalized Domane road bike.

The Domane made headlines when it first showed-up in 2014 due to its unique IsoSpeed rear suspension  system that provided  a new level of articulating compliance with a seattube that was “decoupled” from the top tube (at the seat tube/top tube junction). In one of the sport’s more auspicious new bike race roll-outs, the bike took the victory at Strade Bianche that year under SWiss star Fabian Cancellara. About six months later Cancellara would be riding  a yellow Domane after as he used the bike to earn the Malliot Jaune in the early stages of the Tour de France.

Three years later Cancellara returned to Strade Bianche with the Domane 2.0 that now used a front IsoSpeed for what could be deemed a “full-suspension” bike. Trek of course has never used the word “suspension” and they were reluctant to ever share any hard numbers of just what the measurable  amount of “compliance” was. Admittedly, unlike a standard shock,  it’s not as easy to come up with a firm number depending on rider weight and bump force.

In later years a number of  30mm of travel/compliance was used to describe the amount of deflection but that number included the seatpost and saddle in conjunction with the IsoSpeed. It was then bumped to 40mm and now Trek is saying it’s a 25% increase. Hhmm. 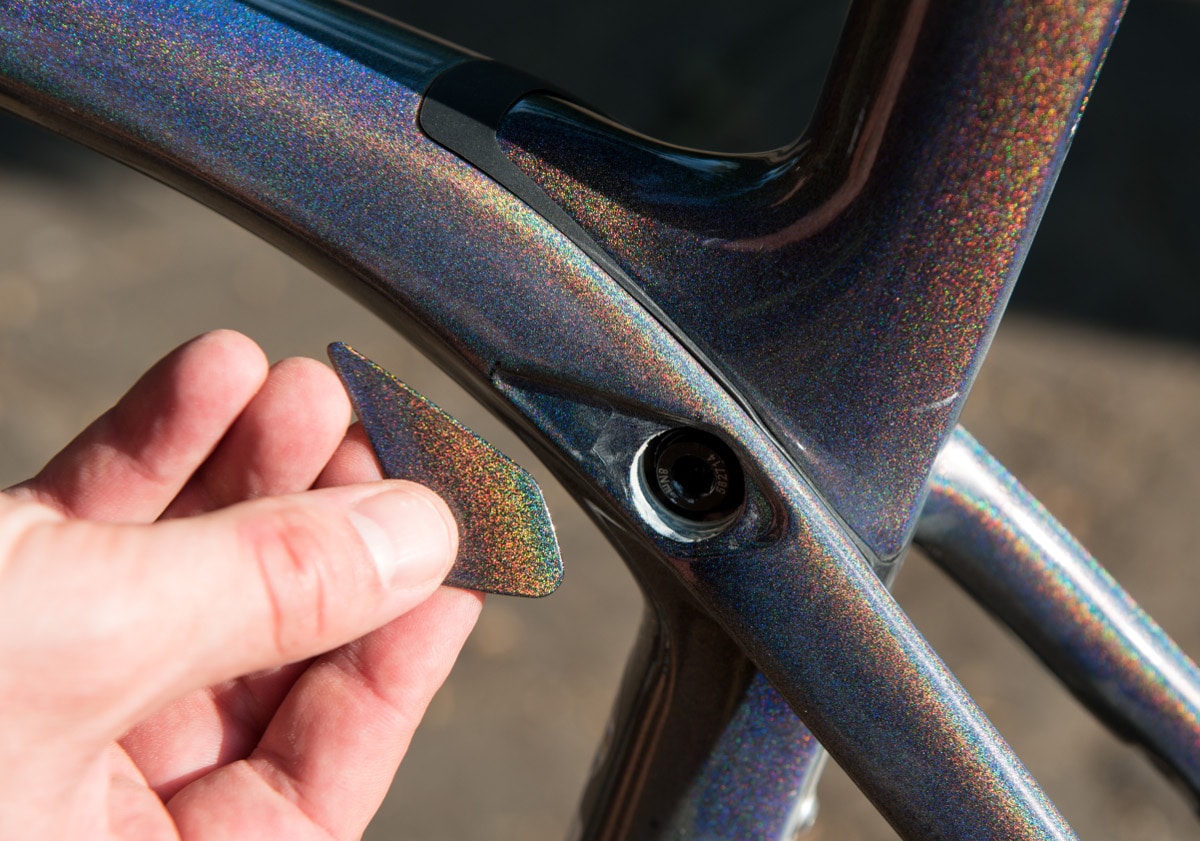 While simple in practice, the new IsoSpeed system is complicated to describe. While the “decoupler” is still found at the seat tube/top tube junction, the big improvement that came on the 2.0 version was an adjustable carbon “spring” that is tucked into the underside of the top tube. By loosening two bolts (one on the backside of the seat tube and the other under the top tube) you can manipulate a slider in a fore and aft direction to alter the  level of compliance. Max compliance is attained with the adjuster pushed far forward. 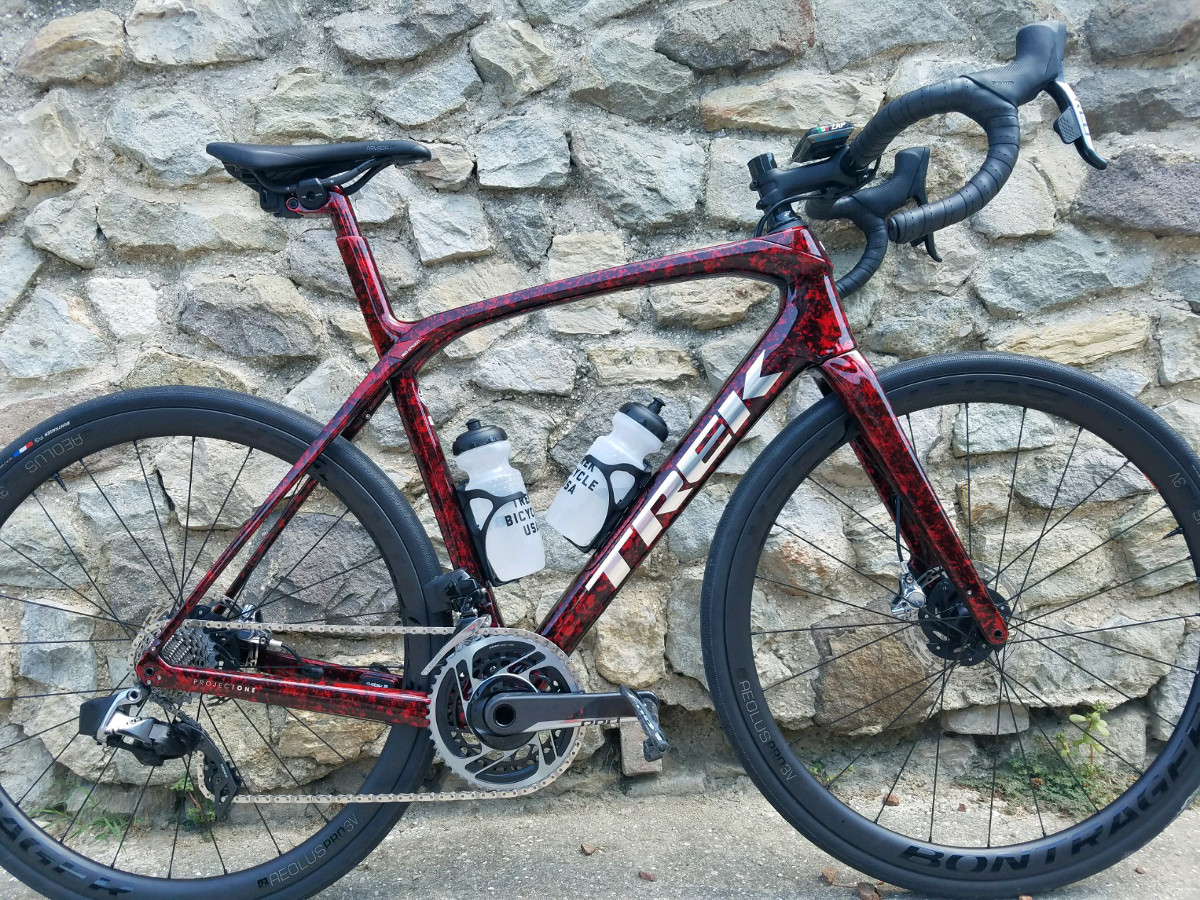 In addition to new styling cues, the biggest improvements to the new Domane should come as no surprise…like every other bike brand, internal cable routing  sure, but new & improved tire clearance is a main talking point. Depending on the tire, we were told that the Domane can accept up a 38mm tread or 35mm tire when used with fenders. While the 9.9 model with roll with 28mm tires, the 9 model will be spec’d with 32mm Bontrager tires mounted on a Bontrager hoop with a 25mm internal width.

Like all modern spec bikes, the new Domane is a disc brake specific build…no rim brakes or wood rims! For 2020 Trek has ditched their old BB90 bottom bracket in favor of a threaded T47 product.

The SLR 9 models we rode will sell for $11,300 with the SLR 7 coming in at $7999. As in the past, both the endurance and pro team H1.5 geometry will be available (4cm difference in stack), but the latter is now only available through Trek’s vaunted Project One build program.

When it comes to frame sizes, Trek has joined Specialized and ditched their women-specific sizing convention; now it’s just a bigger spread (44cm-62cm) of frame sizes. And like others, Trek too claims each frame benefits with size specific compliance. 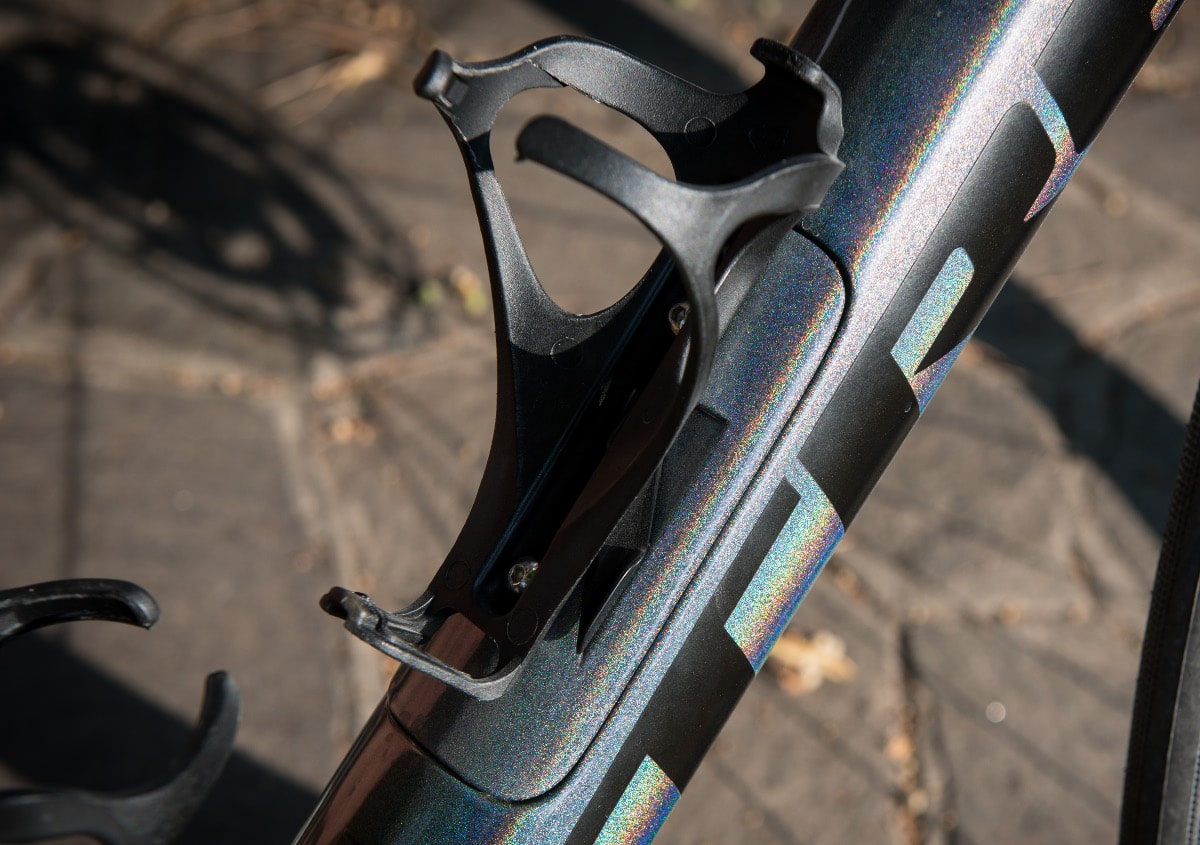 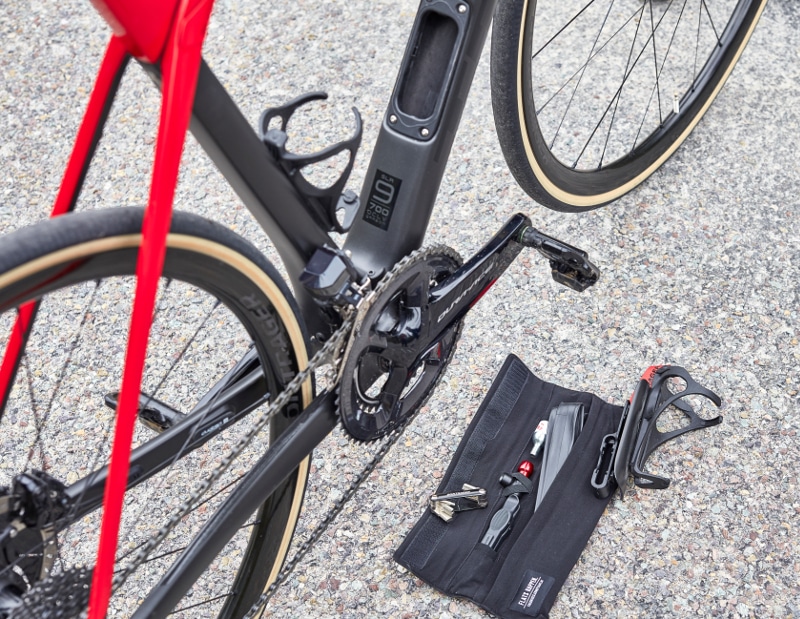 Adding to the SUV metaphor, new to the Domane frame  is a “glove box” storage compartment on the downtube. With the flip of a simple lever both the bottle cage and the carbon plate it is mounted to pops off to provide access to an internal storage compartment. Stuff it to your own spec with food and tools to free up a jersey pocket, or us the handy canvas Bontrager “wrap” that holds a tube, cartridge, and levers  which is designed to slot inside. 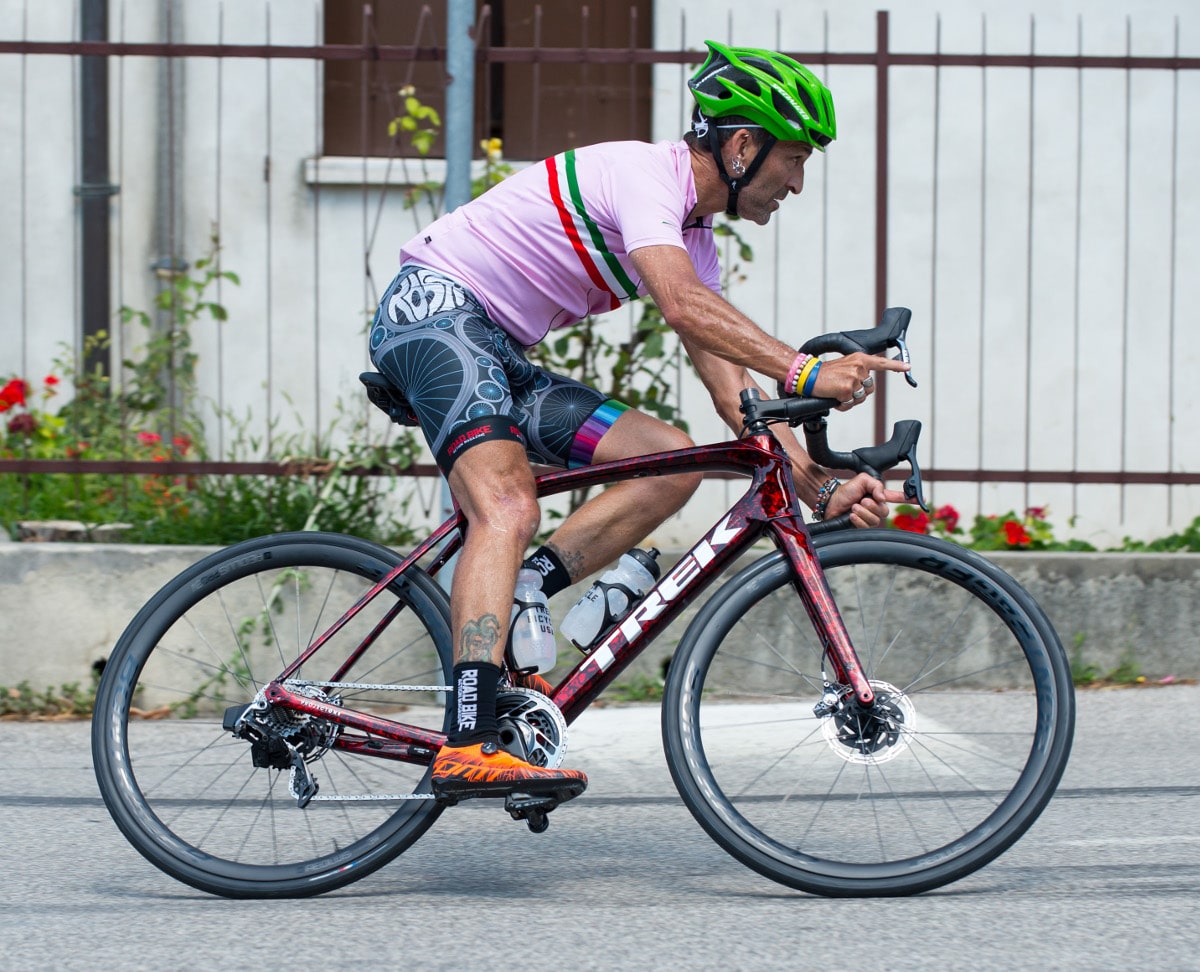 Not a news item here, we have been big fans of the Domane for years. The one Italian ride we got in was a fast paced 40 miler in the hills outside of Padua. Just as we would do at home, the Isospeed was adjusted for max compliance and with the addition of the Bontrager Isozone handlebars and 32mm Bontrager tires, the SLR 9 comes as close to providing an efficient, but wholly comfortable ride as any bike we’ve ridden.

The Domane SLR9 had every measure of a performance bred bicycle; fast and efficient with a ride quality that was only enhanced by the Isospeed suspension.

Although the Checkpoint is Trek’s official gravel entry, now with clearance for up to a 38mm tire, the Domane can just as easily act as a solid gravel contender. Less dowdy looking as the more utilitarian leaning Checkpoint, all the Domane lacks for a gravel purists’ dream bike is room for up to a 42mm tire and a third bottle mount. Before you buy be sure to check out both the pre-built Project One bikes or any one of the hundreds of variations you can design yourself off the Project One menu.