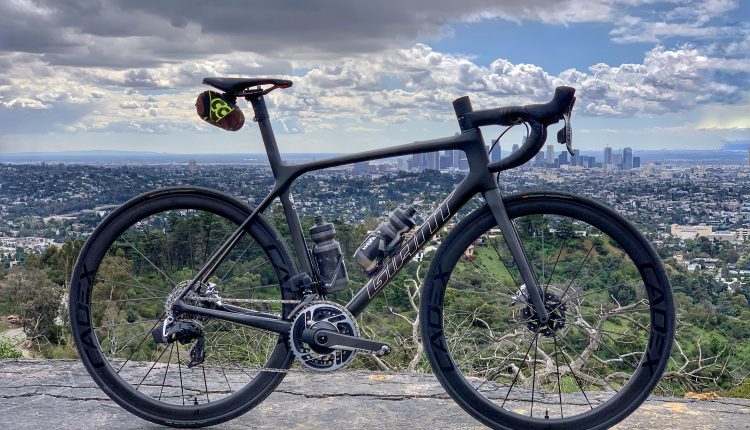 Over 20 years ago, the Giant TCR (Total Compact Road) shook up the racing world with its then-revolutionary geometry and construction. The compact geometry was so extreme that it was banned from racing at first but was ultimately deemed legal. Now nearly every bike on the market relies on a compact geometry design, but what hasn’t changed is Giant’s drive to push for a better and more refined race bike.

The 2021 TCR frame is now in its ninth version with this update. Having been an early adopter of disc brakes, Giant has been able to not only adapt them to road bikes but with over six years of road disc experience, they have optimized the platform. Our TCR Advanced SL 0 Disc test bike hit the RBA scale at a stunning 14.54 pounds. Sure ours is their top tier bike at $11,000, but it is stunning considering the 42mm deep tubeless wheels, disc brakes and includes a power meter.

Giant remains the world’s largest bicycle manufacturer, and this has given them the resources to experiment with new processes that streamline the production. The new SL line is comprised of laser cut carbon swatches rather than the machine stamped version of the past. The swatches are also now robotically positioned for the highest level of precision. These two processes alone have resulted in Giant’s ability to minimize frame weight significantly and refining areas for added stiffness.

On top of the new construction and layup is refined tube shaping. Like many other brands, Giant has looked to optimized aerodynamics, but the TCR still remains their all-around race bike. There is a new downtube shape that is wider and is now rounded on the front-facing side. The fork has also been changed slightly, but overall the entire bike has just been tweaked and further perfected.

We opted for a size ML this time in exchange for the size M we usually get. There is a 99.1cm wheelbase with a 16.5mm headtube. The chainstays are 40.5cm and still leave room for 32mm tires. Our bike came with a set of tubeless 25mm tires that are mounted to on the 42mm deep CADEX wheels. They are hookless and have a 19.5mm internal dimension with a 23.4mm external dimension. This lets the tires measure a bit wider at 26mm but still relatively narrow for today’s standards.

This top model relies on the 12-speed SRAM Red eTap drivetrain. A 48/35 combo upfront with the 10-28 cassette in the rear. Giant fitted their carbon stem and bar with a new short saddle on top of the integrated seat post. The frame comes with two seat masts, short and long, but remember this is a permanent setting, so once you cut it to size, there is no going back.

With the bike landing at our doorstep only a few days before the worldwide pandemic, it has been less than ideal for getting it’s standard testing since group riding is none existent. We did get a few good solo rides in, and on our favorite routes, the bike is stunning. Between the race geometry and CADEX carbon spoked wheels, this bike is a rocketship.

Cornering is spot on, and the bike feels like its on rails. Since many of our bikes now come with 28mm or larger tires, we did swap to something more familiar for a few rides. This offered even more cornering confidence when things were fast. For us, the slight weight gain in larger tires is worth it, and the bike is still well under 15 pounds. Giant has used a 1.25 steerer for a while, and the added diameter is said to help front end stiffness, and it seems to be working. The only real downside is stem options are not as extensive as the more traditional 1.125 steerer, but when you look, there are more options than one might think.

Climbing is rewarded when on such a light bike, and the bottom bracket is very beefy. The press-fit 86 bottom bracket that Giant has run for years is known for being much less maintenance than the 30mm options most of the competition uses while keeping the weight down. Even after riding in the rain and washing the bike with a few times, there wasn’t a hint of noise.

Overall The new TCR seems to be an improvement. There are no widgets or funky proprietary gimmicks, just refined engineering and production that offer noticeable weight and performance gains. While we appreciate the ISP seatpost and it’s added performance, the Pro level with an adjustable seat post is probably a better choice for most. The Pro level saves you some significant cash too, but at the loss of the new laser-cut, robotically placed layup meaning a slight gain in weight.

For us, the TCR Advanced SL Disc is still a bargain when you look at the competition that exceeds it in cost. Many of those also don’t include a power meter, and none include wheels that perform like the CADEX do, but those need a review all their own. At the end of the day, the new ninth-generation TCR continues its evolution with stunning lab numbers but, more importantly, an improved ride performance.

Thanks to Giant’s dominance in the industry, they also send the savings straight back to you, even if it doesn’t seem like it at $11,000. It looks like Giant will have complete bikes starting at $2000, and if you can believe it, there are even a few with rim brakes. The SL and Pro levels will also have frameset options with disc brakes and an SL with rim brakes. Full price chart bellow.

* New processes equal real-world gains
* ISP isn’t for everyone
* The wheels are a bonus but go bigger on tires.