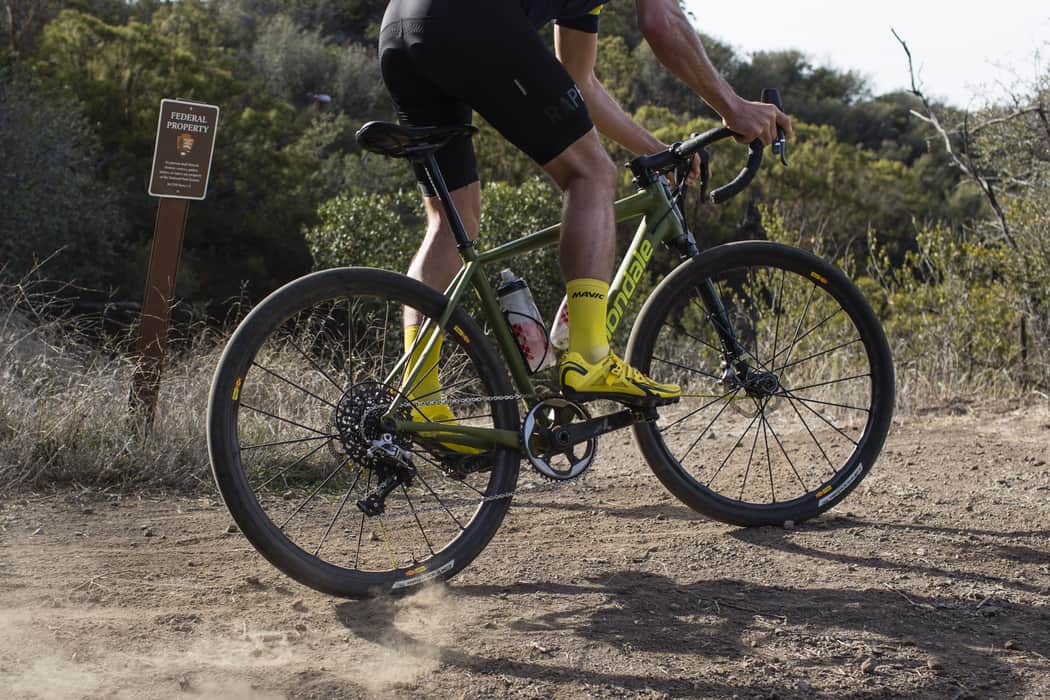 Is Cannondale’s Slate a revolutionary new bike with the ability to blend key elements of road and mountain bikes, or is it simply a bike without a niche specific identity? We spent a day riding it in California’s Santa Monica Mountains on a varied selection of surfaces ranging from the perfectly smooth pavement of Pacific Coast Highway to the twisty, loose and rocky singletrack of the Backbone Trail looking for an answer to that question.

WHAT IS IT?
Cannondale, and the bike’s creator David Devine, wanted something truly unique that would stand apart from the mostly re-purposed ‘cross bikes that are filling the “adventure-road” segment. The most dramatic of their ideas is a Lefty Oliver suspension fork with 30mm of travel made specifically for the Slate, which includes a push-button lockout. If you’re unfamiliar with the Lefty fork, it’s Cannondale’s single-sided inverted suspension fork that is found across their mountain bike line.

And then there’s the wheel size. Instead of using a standard 700c road wheel, the Slate uses 650b wheels with super-fat 42mm slick tubeless tires made by Panaracer. Because the 650b wheel with 42mm tire is equal in diameter to a 700c wheel with a 23mm tire, the Slate is able to maintain a similar geometry to Cannondale’s race bikes while still achieving adequate clearance for the fat tires. Most bikes in the adventure-road category end up longer and higher than typical road bikes, but the Slate features a stack height only 1.5cm higher than the EVO race bike (size Medium/54cm), along with the same 405mm chainstay length. Overall wheelbase is stretched out 1.6cm longer due to a relaxed the front end.

The frame itself is SmartFormed aluminum with highly manipulated seatstays and chainstays designed to add compliance. Cannondale calls the design Save Plus Micro Suspension, and is a similar design used on Cannondale’s EVO and Synapse models. Wisely, Cannondale included rear eyelets for rack and fender use…up front, no such luck!

Three Slate models are available that range from $2980 for a Shimano 105 build, $3520 for Ultegra, and $4260 for a SRAM Force 1x-equipped version. All the models are disc brake-only, and share the same frame, fork, wheels and tires. We rode the SRAM-equipped model that features a HollowGram Si crank with a single chainring and a slew of purple anodized parts that gave us flashbacks to mountain bikes of the early ’90s.

PAVEMENT AND DIRT
Our 45-mile ride consisted of both paved roads and dirt singletrack. Even though the dirt miles paled in comparison to the overall time spent on the road, the dirt was enough to get some clear ideas of how suited the Slate was as an off-road performer. While getting the bikes set-up, we were cautioned against running too much pressure in the large-volume tires. Six-time Cyclocross National Champion Tim Johnson, who has been part of the Slate project since its inception, recommended 40psi for the dirt, and up to 60psi on the road.

Once finally off and pedaling we started playing with the bike’s novel features, such as the lockout function on the Lefty suspension fork, which did indeed do as promised. After a mellow-paced cruise down the coast we began a canyon climb of a few miles in length. On that climb we saw how well the voluminous tires eliminated any vibrations coming up from the cracked, poor pavement we were on. But at the same time, the bike’s weight (around 20 pounds) and rather soft tires didn’t exactly instill any desire to charge uphill in an all out effort. If that is less important than having the freedom to hit any and every make-shift jump that presents itself alongside the road, then chalk one up for the Slate.

Finally, the moment we had been waiting for arrived—the dirt! We took the tire pressure from 55psi down to around 40psi. And at that pressure, rolling over small rocks and completely smoothing the singletrack under us was indeed the Slate’s cup of tea. It felt so smooth in fact that we took that speed and confidence into the corners, and that’s where it quickly became clear that even a minimal file tread on a gravel/cyclocross tire does wonders for traction.

The Slate’s slick, albeit wide, tires offered little in the way of traction, and cornering at speed in loose dirt on the Slate would have to be an acquired skill. By the next dirt section that skill was quickly being learned, as we began understanding just how much we could push before the tires would let go. Again, rolling down the trail was a blast having the tires and suspension fork eat up the bumps, but you better be ready to search for the correct line when coming into the next corner, and maybe have your inside foot unclipped as well.

Around midway through the ride, our rear tire met its demise and succumbed to a large enough sidewall tear that no amount of sealant inside was going to stop it from spewing out all the air. So in went a nutrition bar wrapper to act as a tire boot and an inner tube, then we were back at it. Going from dirt to pavement with our tires still at 40psi ended up being a less-than-inspiring experience. Trying to tackle the final twisty paved descent at speed proved difficult with mushy tires. We have to think that the wheel size has more to do with this than the actual pressure and width since running a 40mm width tire at the same pressure on a 700c rim, in our experience, handles better.

45 MILES LATER
After just three hours of riding the Slate we had a decent idea of what it’s about. As a road bike alternative that opens the door to an entire world of route options, it’s solid. The Slate’s ability to extinguish the bumps and hits that come with off-road riding is remarkable, it just has to be remembered that even with such a wide tire there is little to keep your tires under you in soft corners. Because 650b is a popular mountain bike wheel size, knobby tires are available that would fit on the Slate and help with traction.

We do think that the Slate is an appealing setup for someone getting into the sport that is looking for a single bike that will allow any and every type of riding they decide to try. One thing we would like to see is a fourth model that comes in below the $2000 range, even if that means losing the Lefty Oliver fork. Since Cannondale says that sales have dramatically exceeded expectations, our guess is that more models are in the works.

For more information on the Slate visit www.cannondale.com!