All new? Yes. Lighter? Yes. Faster? Sure seems that way! 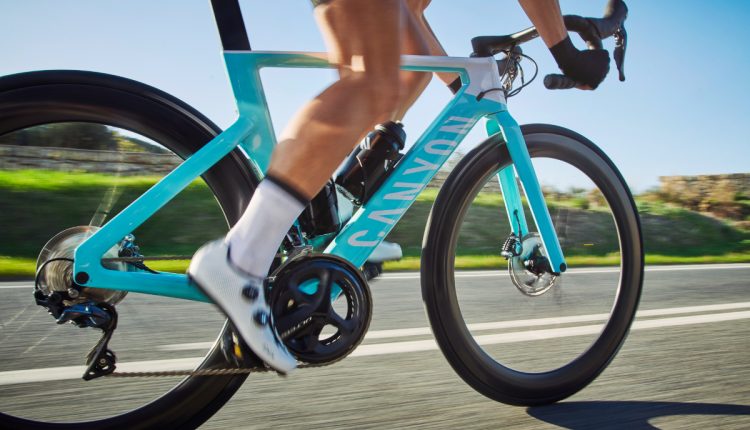 Just a tad over 24 hours ago the cycling world was made aware of a new Canyon Aeroad, their first re-issue of the bike since it first appeared back in 2014 – check out our “First Look” of the Canyon Aeroad. This new model year bike is home to some really novel engineering feats, key among them an adjustable width/height handlebar/stem combo, the former maintaining Canyon’s curious attention to unique handlebar designs (in mind the duo-plane design found on their Grail gravel bike).

What we have here is our first ride review  from the weekend of riding that we got in after we brough the bike home.  Doing the duties for this first ride review is longtime RBA test rider and actual NASA type engineer, Scott Evans. All you need t know about Scotty is that he is highly proficient all two wheels; road, track and gravel. 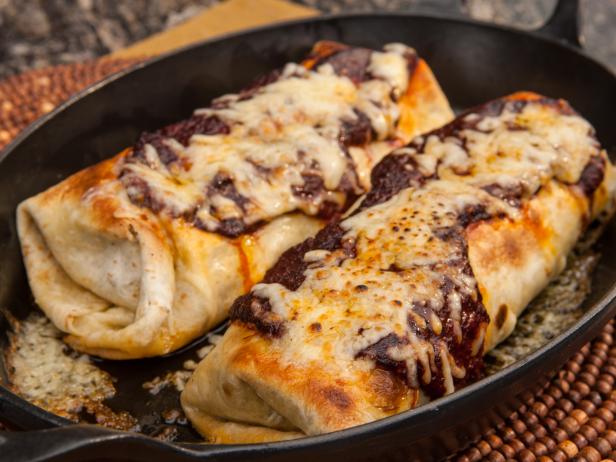 There is a longstanding joke often used in engineering circles where you are given three desirable qualities that are at least partially in conflict with one another. As an example, imagine choosing  a chicken burrito where your options are either: 1. big, 2. cheap, or 3. delicious and you can only choose two.  Now we’re sure  that, like us, you would find having to choose 2 of those 3 to be a real predicament. What does a delicious chicken burrito have to do with a high-zoot, latest & greatest  aero road bike from Germany you ask?!  Simple, with with the Canyon Aeroad the choice is between 1. aerodynamic, 2. light, or 3. compliant. The difference here is that you can actually chose all three.

For a while there we thought the bike industry would fall into the equilibrium carved out by the Trek Emonda and Specialized SL7: more aero but not totally in order to save weight. A compromise. Somehow it seems the Canyon came up with a much more aerodynamic setup with virtually no weight penalty…and an excellent ride quality to boot. 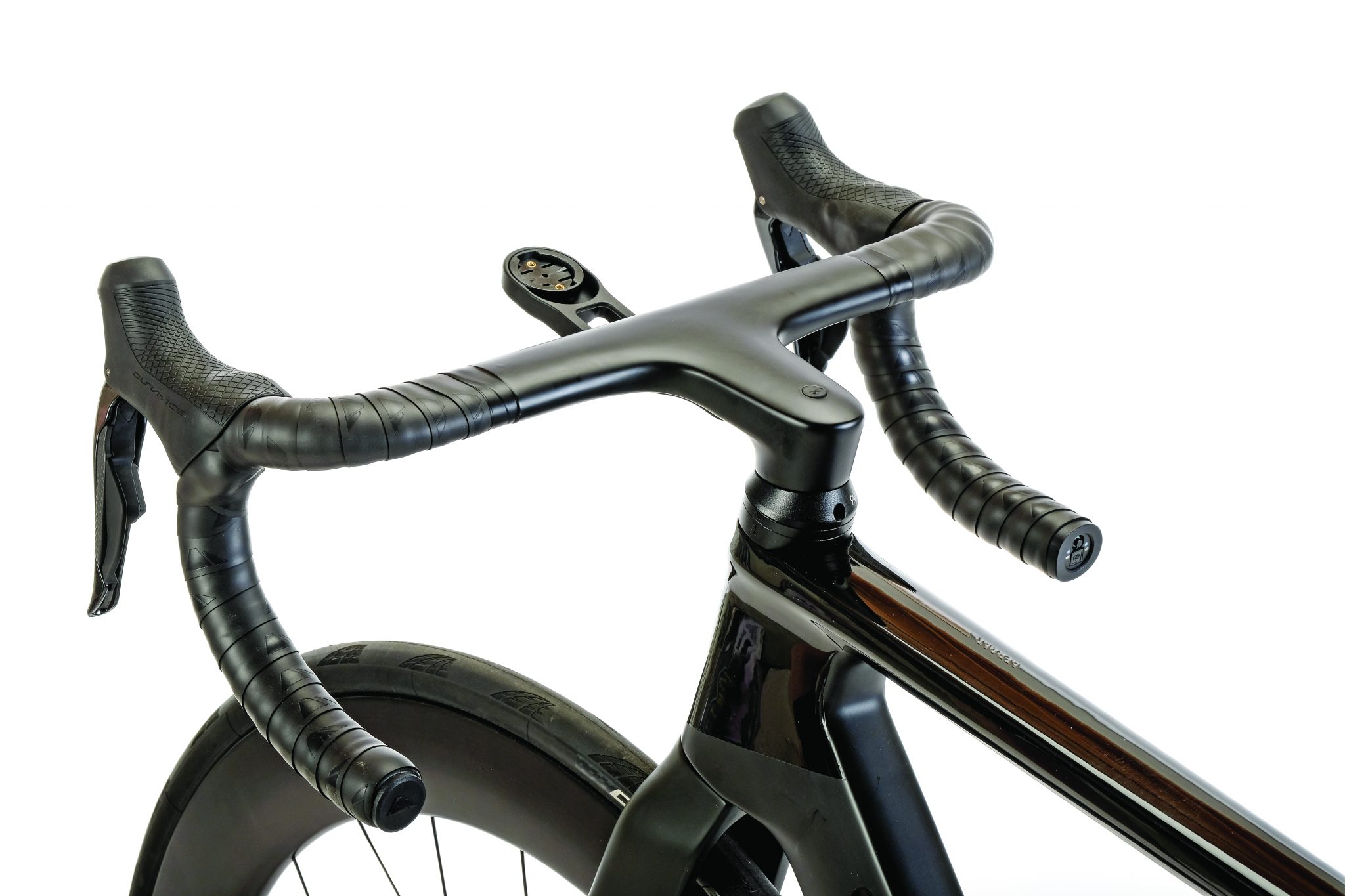 We have to admit, being able to  adjust the handlebar width (38mm-46mm) via four small screws is a novel idea. Having extendable  “wings” is a neat idea which I’m guessing reduces complexity at the factory which means fewer screw-ups out the door and a cheaper pipeline to the customer. However, one has to be satisfied with exactly one stem length for their bike size (our small frame was spec’d with a 90mm stem), and that will irk some. I also didn’t like the actual implementation of the telescoping handlebar  design because it leaves a big groove in the top of the bars. Sure it can be covered with tape, but I think that will get punctured in no time and it feels weird on the fingers.

I would have tapped the holes in the telescoping bar part and used shorter screws instead of tapping the top of the bar and using long screws. That way the telescoping part could remain solid at the top and feel like the fixed part of the bar. As an aside, why go through all the trouble to design a slippery bar and then interrupt a lot of that flow with a large, strangely-angled computer mount? 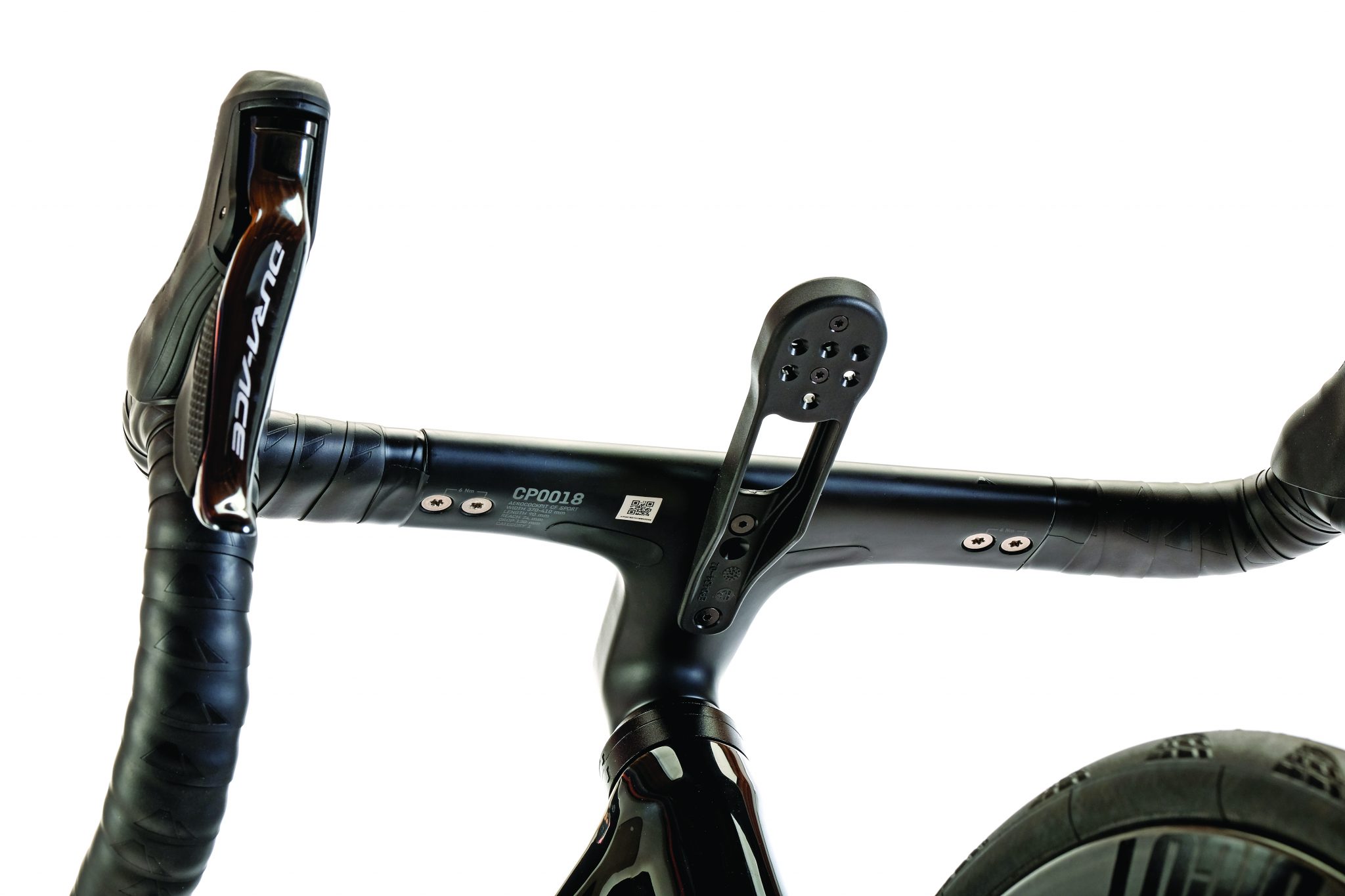 The telescoping stem is nifty and I love the idea that one doesn’t need to schlep to a shop to have the stem cut after fitting the bike. There is only 15mm to play with, though, so unless you like a pretty “pro” fit, you’re going to be out of luck. It wasn’t the easiest to work with, either. 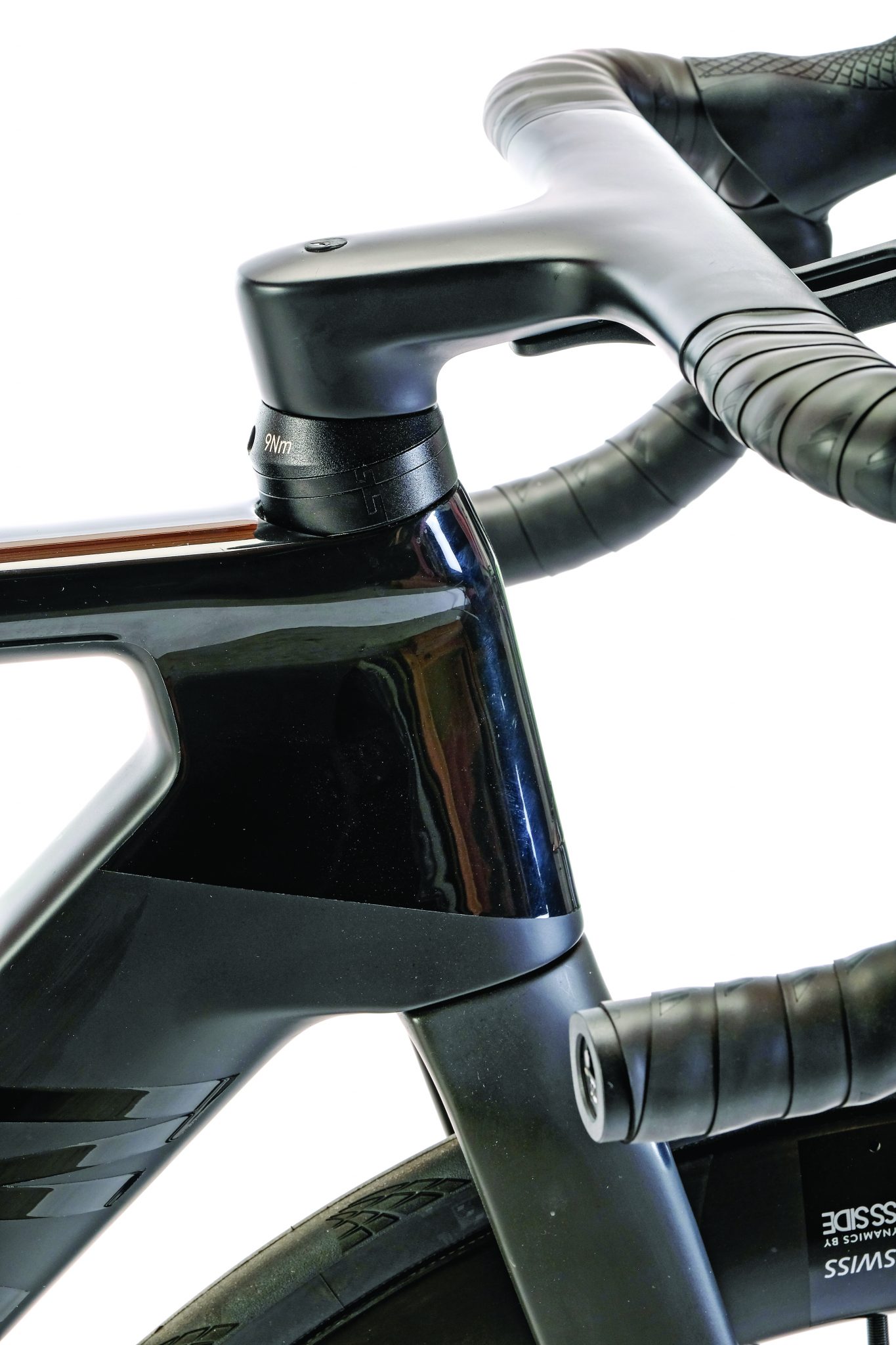 That the lower third of the seat post is cut away to apparently provide some added compliance, well,  that idea doesn’t really pass the smell test.  I couldn’t quite grasp how the cut-away seat post design was going to give me a better ride but it didn’t matter to me as all I had to do was let some air out of the rear to make for a butter smooth ride. If anything, the cut-away post seems more intentioned to allow for added clearance around the seatstay/seattube junction. 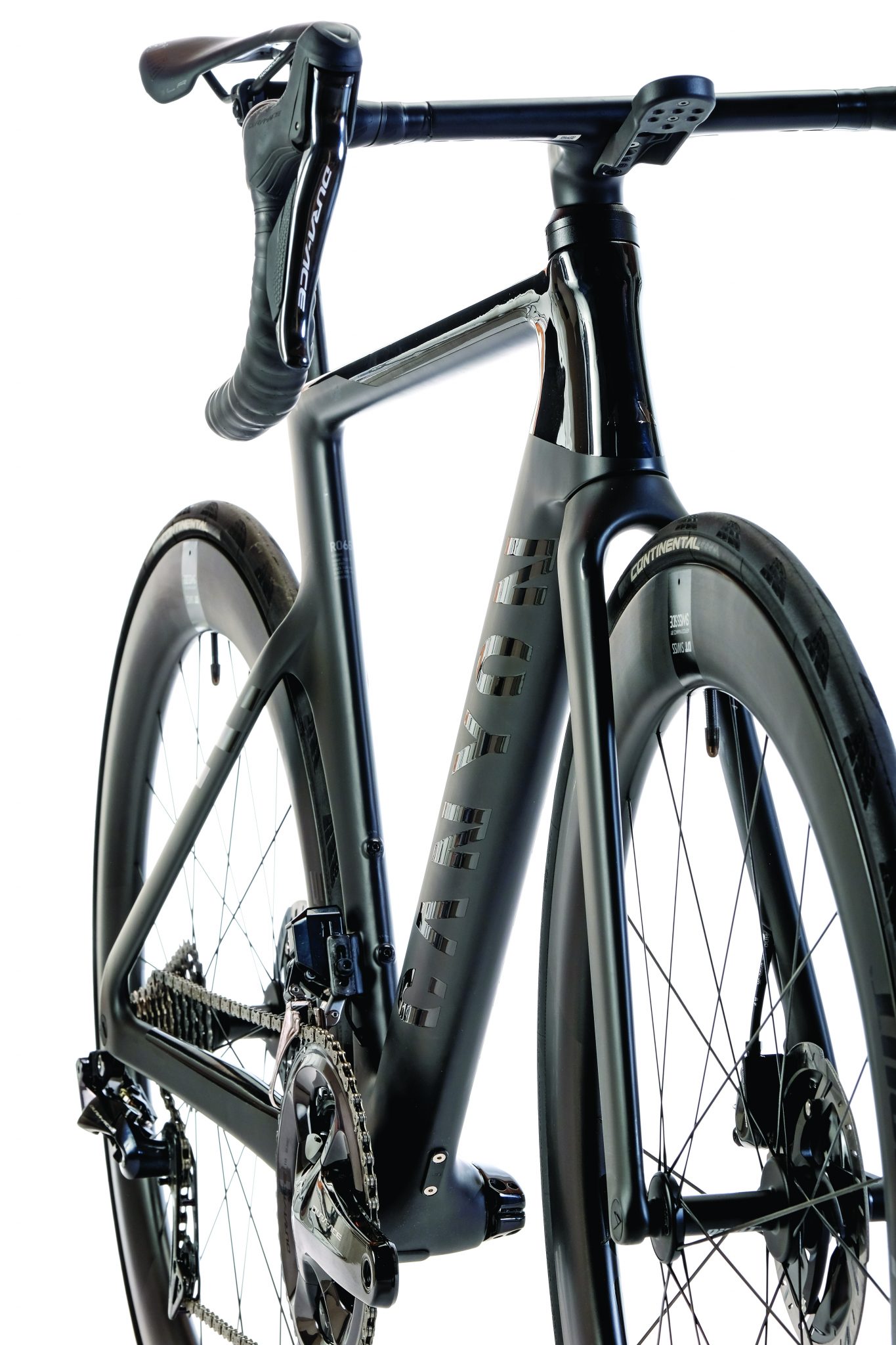 AS FOR THE RIDE

I like the idea that the aerodynamics are optimized for nonzero yaw.  With the palatial RBA offices located in the very windy Santa Clarita Valley, and virtually every ride we do gets buffeted from all sides by strong wind, I’m happy to report that his bike cut right through and the very deep (62mm) DT Swiss wheels handled wonderfully. The bike loves to tack upwind as much as it likes to climb. 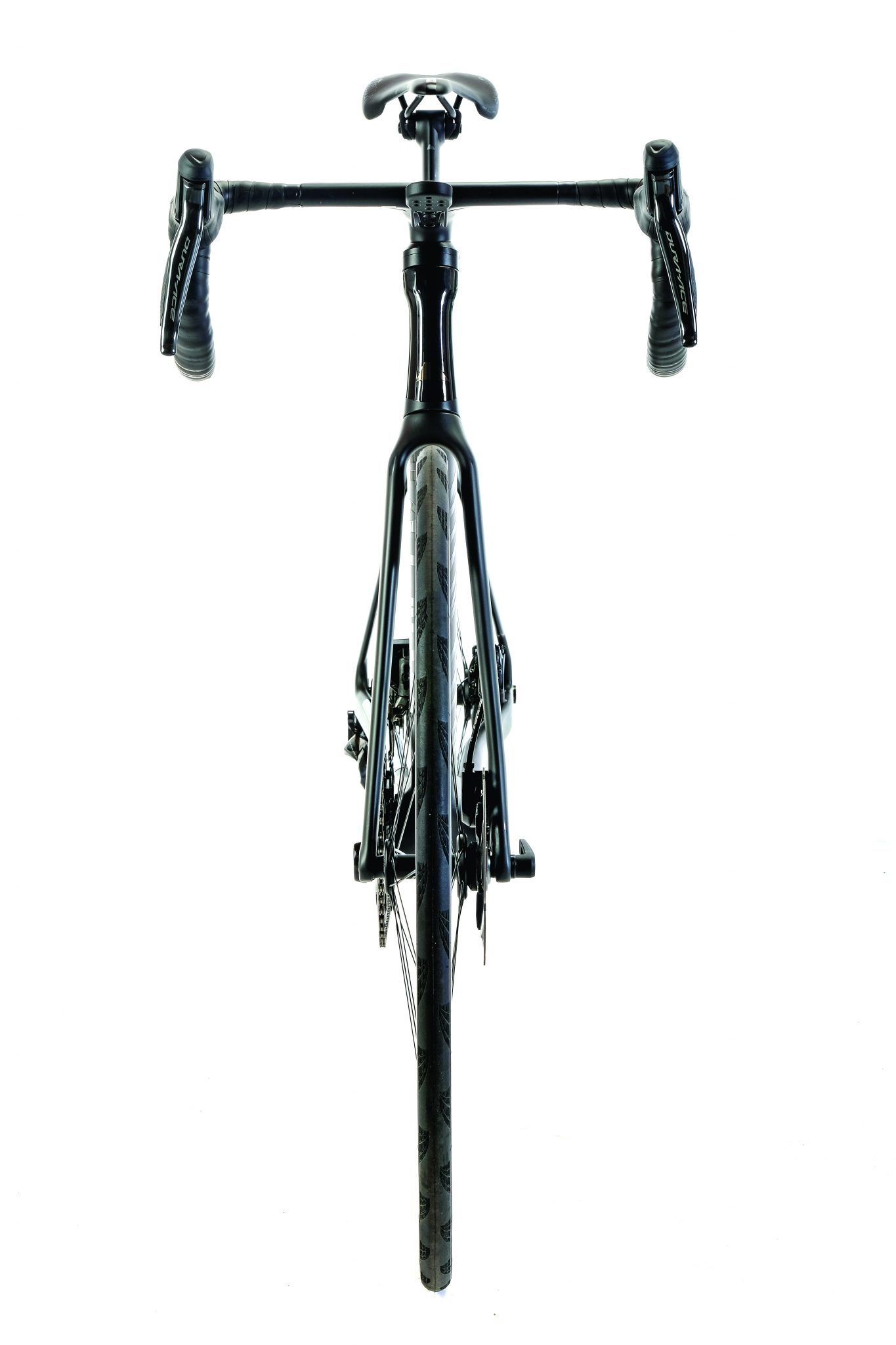 Some of the aero choices I wasn’t sure about. The #19 CAD prototype design had a more aero fork, especially at the crown. A lot of bike companies have seen that the extended crown design is fast (think Cannondale SystemSix) but this was left out of the final Canyon presumably to save weight. The resulting fork does have a clean look, but the Canyon engineers did note (correctly) that most riders should favor aero over weight. Was the fork tradeoff really worth it?

Speaking of the wheels, I was not happy that they shipped with tubes but with some thought I think I understand why: lower end-user complexity. Just pull them out of the box, shoot them full of air, and off you go. Making tubeless work out of the box takes time. I do like the nod to the idea that wider tires are better; the rear ships with a 28c Conti paired to the more aerodynamic 25 on the front. 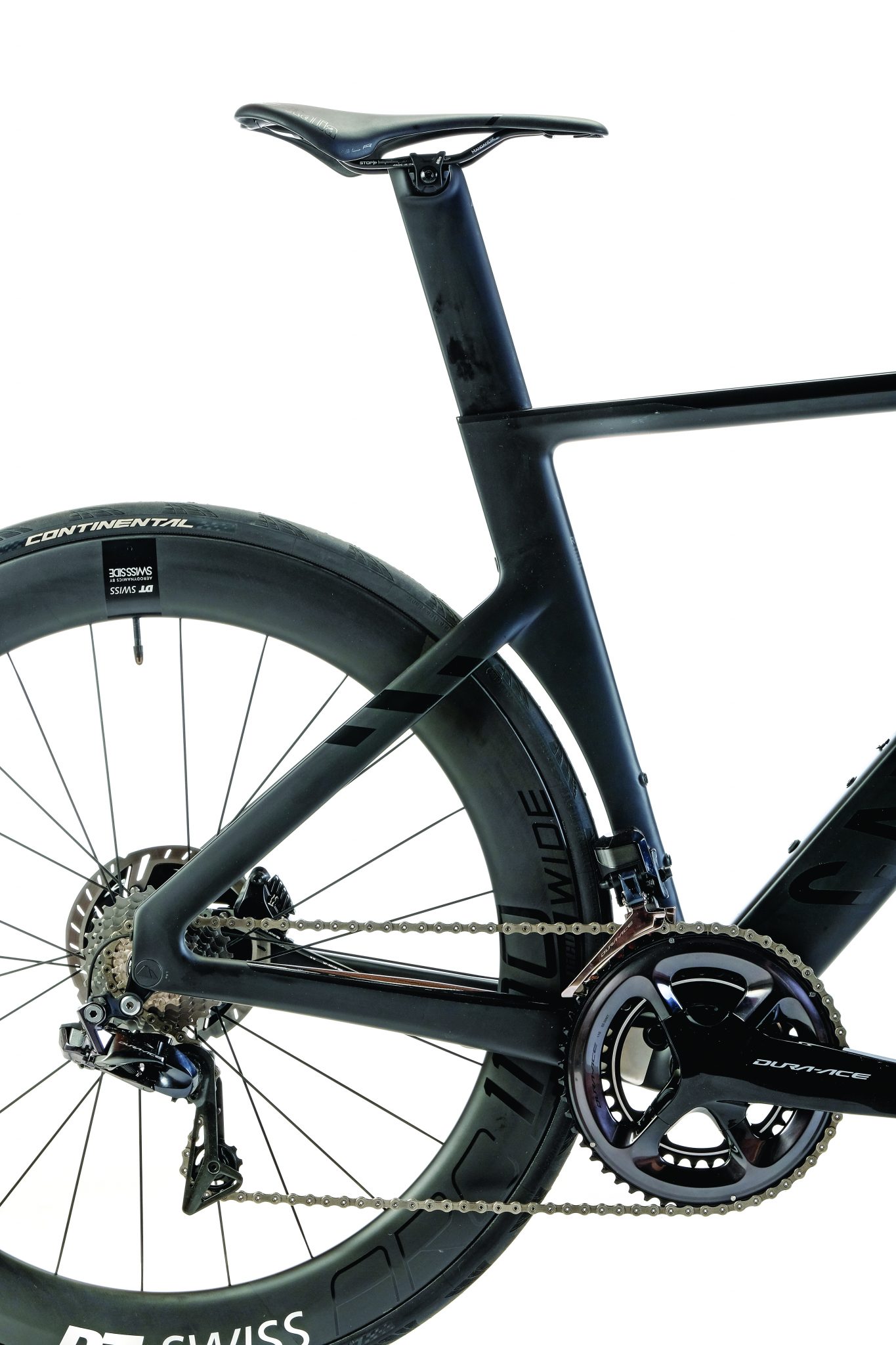 I could feel immediately after swinging my leg over this bike that, at long last, a disc bike felt like what I was used to in a racing bike. The back wheel was finally underneath me as close as I expected and the upgraded handling was immediately apparent. Most disc bikes have rear stays that are IMO too long in order get enough width at the axle but Canyon has solved this. This is a huge plus in my book.

At the end of the day, the bike is an excellent value for Di2 or SRAM Red (both with power meter!) for “only” $9k. Give me this over a Madone at $12.5k any day. Alejandro Valverde and local favorite Alexis Ryan are about to have a very nice new bike day. The bottom line: it’s an elite level bike (think Trek Madone, Pinarello F12) at ¾ of the price