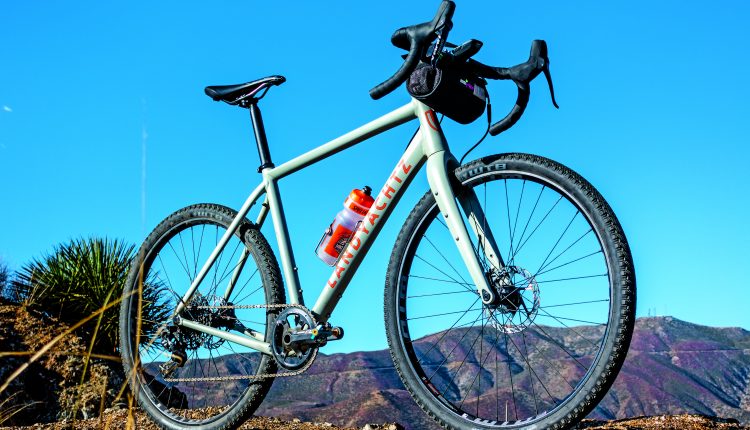 From longboards to bicycles, Vancouver-based Landyachtz has a wealth of experience designing self-propelled transportation. Our last test of their 1146 Columbus Steel-framed road bike (RBA January 2019), left us waiting on the next release from the Canadian crew. Landyachtz filled the one remaining hole in their drop-bar catalog with the AB1 gravel bike. AB stands for Adventure Bike, Landyachtz hit nearly all the marks to achieve the optimal modern gravel machine. Best of all it’s in stock and doesn’t break the bank.

As Landyachtz’s first foray into gravel, the AB1 is an entry-level build that starts with 6061 alloy tubes that are imported from Taiwan. The frame is designed to be compatible with 700c and 650b wheels thanks to the symmetric, dropped chainstays which create room for up to 700x42mm or 650x47mm tires. Landyachtz offers a single build of the AB1, it includes 650 hoops.

Landyachtz designed a custom carbon fork for the AB1 which is drilled with triple mounts making it ideal for handling gear for long rides. Two positions for bottle mounts are drilled into either side of the downtube with a single position available on the seat tube. Fenders can be mounted and a rack can be supported by the two rivets on the seat stays in addition to the two on either dropout.

In order to ensure favorable handling rolling over rocks and roots or with a full load of bike packing gear, the AB1 is designed with a long 104.4cm wheelbase. The slack 72-degree head tube angle helps maintain the relaxed geometry, especially with a loaded front end. At 59.2cm, the stack is relatively low for the size large frame. The reach is long at 39.9cm which encourages a rather aggressive position in the saddle. 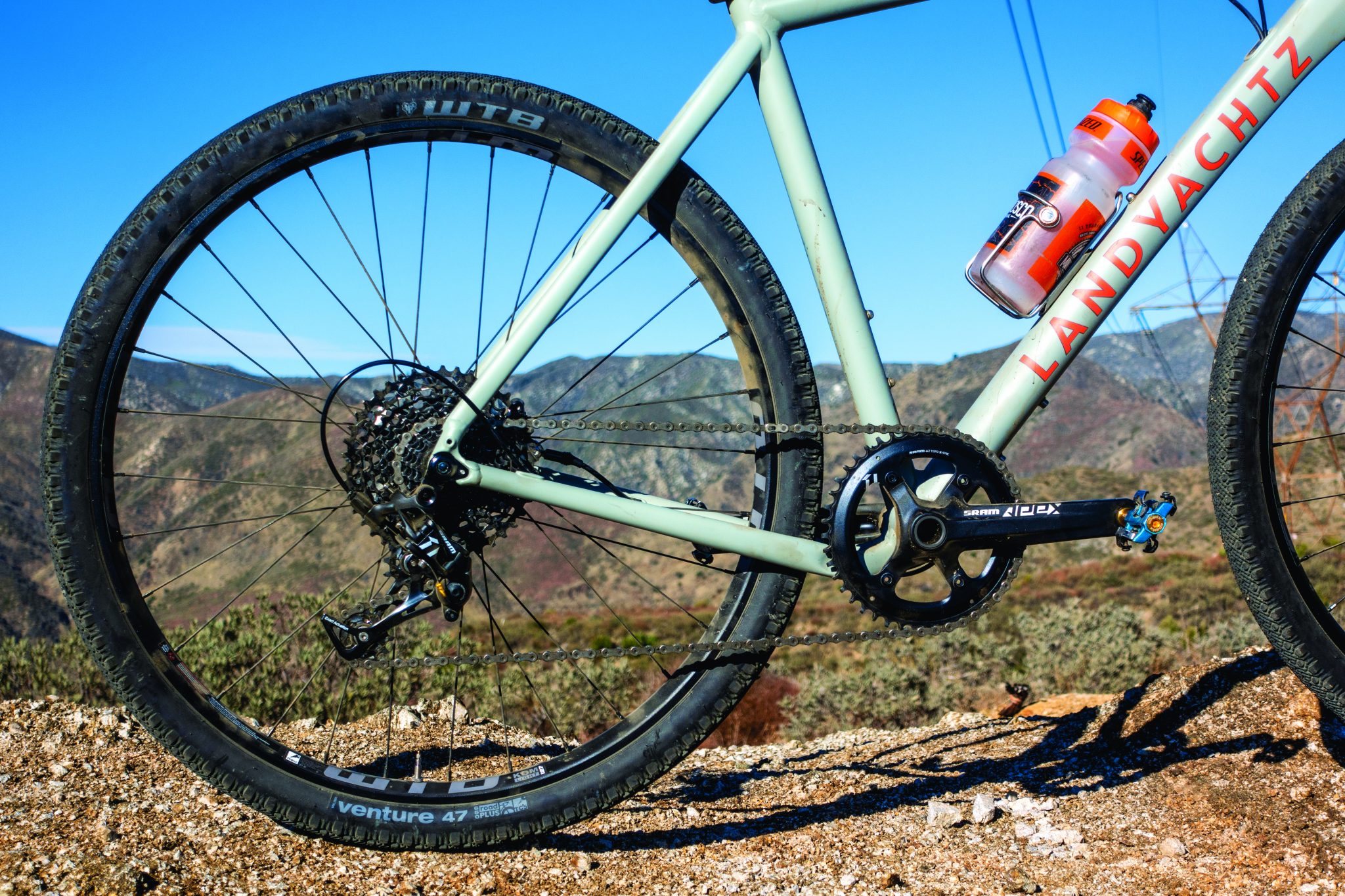 SRAM’s entry-level Apex drivetrain is an ideal pairing for the alloy rig. A SRAM X-Sync 44t chainring is matched to an 11-speed 10-42t XX1 cassette. At 1.05 gear inches, this pairing is above our preferred 1:1 gear ratio, a smaller chainring would be the easiest fix.

In an effort to find some adventure, we scouted some routes using Strava’s route builder.  We found some connectors back in our local foothills made up of graded fire roads in a 19 mile loop with 3400 feet of climbing.

We had trepidations about how the tall gearing of the AB1 would handle on the steep bits of the climb but were looking forward to ripping the final 4-mile descent extra hard on the 650b hoops.

Rolling through a short tarmac climb at the beginning of the loop the AB1 smothered cracks and bumps highlighting its abilities as a modern-day randonneur.

A misleading drop-in to the fire road  started off the 7 mile ascent to the first peak.  Rolling terrain and with more up than down consumed the majority of the climb. The Landyachtz excelled in the beginning but once the grade pushed past 10-percent drops of sweat started collecting on the top tube from the low-cadence, low-speed pedal churning.  It’s an issue that can be avoided though and if this was our personal bike we’d have swapped out the chainring before assembling the bike out of the box. The 23.12-pound weight didn’t make the ascents any more efficient either. But it was also a reminder that all gravel is different and we assume it’s much less steep in British Columbia.

Soon the roads leveled out averaging just 6-percent for the majority of the climb and the gearing was mostly appropriate. We cruised past low-hanging clouds and found ourselves at the top of the first peak. No other tire tracks had been seen and the feeling of an adventure started to set in as we began the descent.

And the adventure truly began as less than a mile down we hit an old landslide. Ruts cut through where the trail once was and soft rocky dirt piles blocked much of the trail. The 650b wheels navigated the slosh and rocks well but the abilities of the bike were greater than our own handling  confidence and we did hike-a-bike the trickiest section.

Rock-filled rollers led up to the second peak at the top of the Gold Canyon Truck Trail.  The 650 rubber plowed them which allowed more focus on the bigger trail obstructions.

Riding a new descent for the first time can be intimidating for any rider especially on a new bike. But after our run-in with the landslide, we knew the AB1 was a capable descender even in the worst conditions. A better descent than Gold Canyon would have been hard to come by. Fast, wide-open straightaways, flowing switchbacks and unforgettable views made this an immediate add to our regular test roads.  And the AB1 was the inspiration to find it.

Check out our full review of the Landyachtz AB1 in our June Issue. 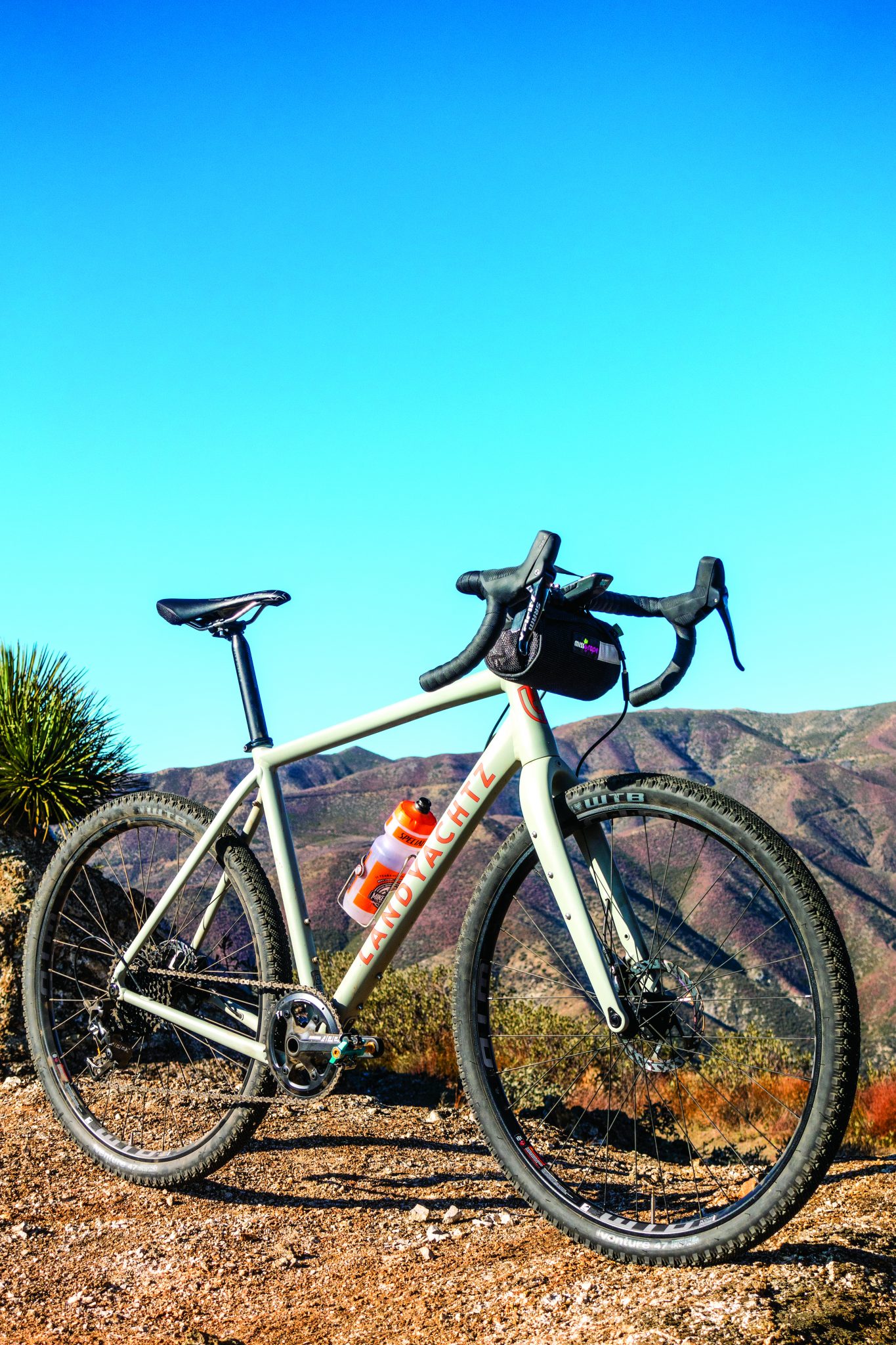