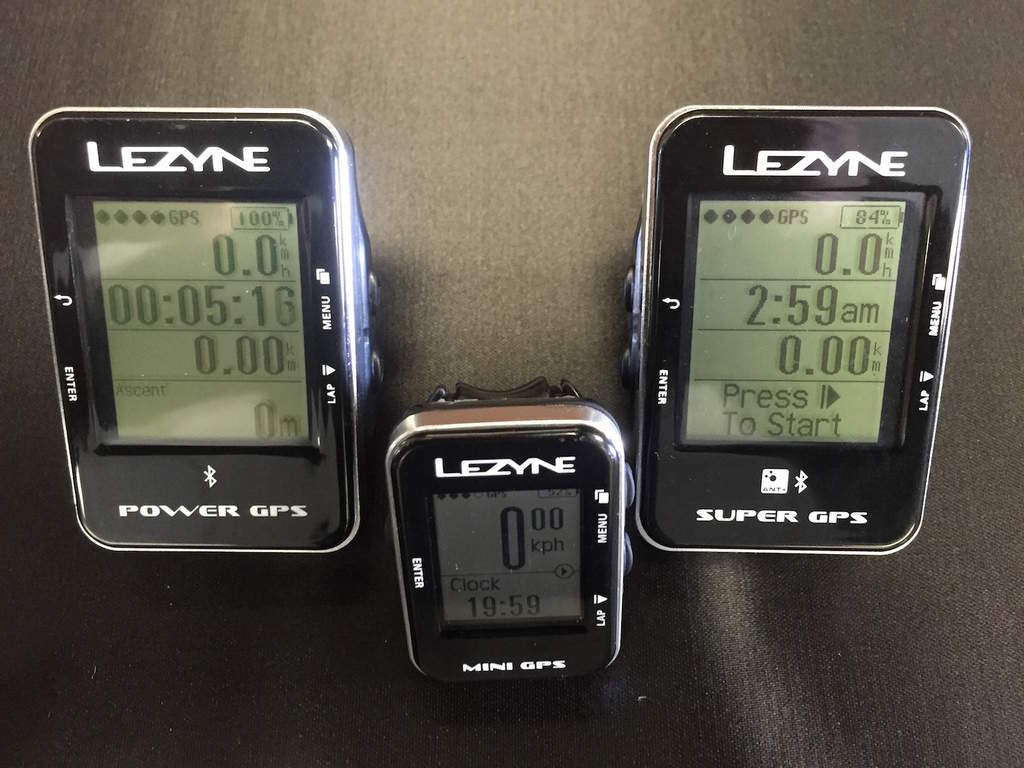 Lezyne has successfully made a name for themselves by bringing a level of functional design and style to the typically utilitarian products like multi-tools, pumps, and lights. Now, Lezyne has turned their attention to cycling computers, offering three new GPS units in what has been the biggest undertaking in the San Luis Obispo, California based company’s nine-year history.

In what’s a completely Garmin-dominated category, Lezyne’s new Mini, Power, and Super GPS units are not trying to go toe-to-toe with Garmin in the sheer number of metrics they offer, or on the bike mapping features; rather, Lezyne has targeted simplicity and a much lower price. In addition to the hardware, Lezyne also developed a web-based software called GPS Root with tools for data analysis and an app (IOS and Android) that features many of the same analysis tools. The files are .fit format so they can also be easily uploaded to Strava, Training Peaks, and a number of other popular sites.

The Mini is the smallest cycling-specific GPS computer available (33.4mm x 50.8mm), weighing just 30 grams and selling for $139.99. It’s by far the most basic of the three units and does not offer ANT+ or Bluetooth connectability. So, if you want to see data from a power meter, heart rate monitor, or cadence sensor the Mini is not for you. What it does have is all the standard measurements of time, distance, and speed options, in addition to temperature, elevation gain, loss, and current elevation. The screen can be customized to display in two, three, or four lines of data. Three buttons on the side of the unit control all functions instead of a touchscreen. Run time is 10 hours of use and there’s 100 hours of recording time; although, if you don’t ever delete your rides the oldest file will be overwritten once the device is full.

Both the $169.99 Power and the $199.99 Super GPS units share a larger size (46.5mm x 73.2mm) and are mostly the same as each other apart from two aspects. All the same metrics that the Mini has can be found on the larger devices, with additional heart rate and power functions. Four buttons, two on each side, control the unit, and just like the Mini they do not use a touchscreen. The Power and Super both have Bluetooth connectability to pair with a heart rate strap or power meter (as long as they are Bluetooth) and a smartphone. Once paired with a smartphone, text and phone call notifications can be displayed. Differentiating the two is the Super’s ANT+ compatibility in addition to Bluetooth, allowing it to connect with any device you care to use. It also has a 400-hour record time compared to the Power’s 200 hours, while both have a 22-hour battery life. Charging is done via a micro USB cable on all three models.

All three units use the same X-Lock mount that is similar to Garmin’s design, yet uses a more secure locking mechanism. It allows the GPS units to be mounted on the stem or handlebar since it uses two stretchable o-rings for retention. A forward mount that positions the unit in front and level with the handlebar is also available for $15.99.

We had the opportunity to get two rides in using the Mini GPS during a media event held in San Luis Obispo. Simplicity is definitely the heart of the Mini. It’s easy and straightforward to toggle through the different data functions while riding. We set it up with two data lines to keep the numbers as big as possible on the small screen. Since we weren’t wanting to use power or heart rate, the Mini was a just fine for our needs during the ride. And once done with the ride, being able to look at the elevation profile overlaid with speed after uploading to the GPS Root site was very cool. Being able to do this isn’t something that’s unique to the Lezyne GPS unit, it’s just that they’ve been able to do it at a price that’s far less than other options out there. If mapping functions are part of your wish list on a GPS unit, then unfortunately none of the three Lezyne units will meet the criteria.

Lezyne expects Mini GPS units to be in shops by the beginning of May, while the Power and Super units are still a couple of months out.

Wahoo Bolt gets a lower price and new stealth colorway