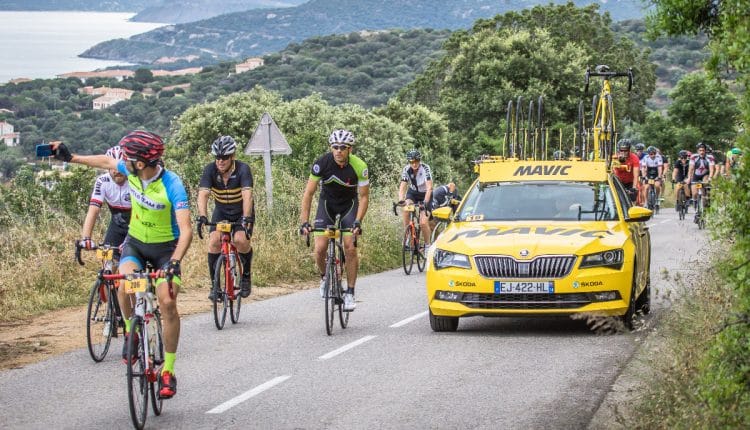 It’s been just one week since a handful of international journos found ourselves rolling out of Mavic HQ in the beautiful town of Annecy, France and headed to the famous port town of Marseille where we would board a giant ferry/cruise ship that would float us over to the island of Corsica for three days of hard riding. The purpose?  To test ride their soon to be launched and completely redesigned Cosmic Ultimate wheels.  And to do so we were able to join in the three stage Explore Corsica sportive that is put on by the same folks who put on the Tour de France….which then also provided us with a fleet of the world famous “yellow cars” and motos for neutral support. 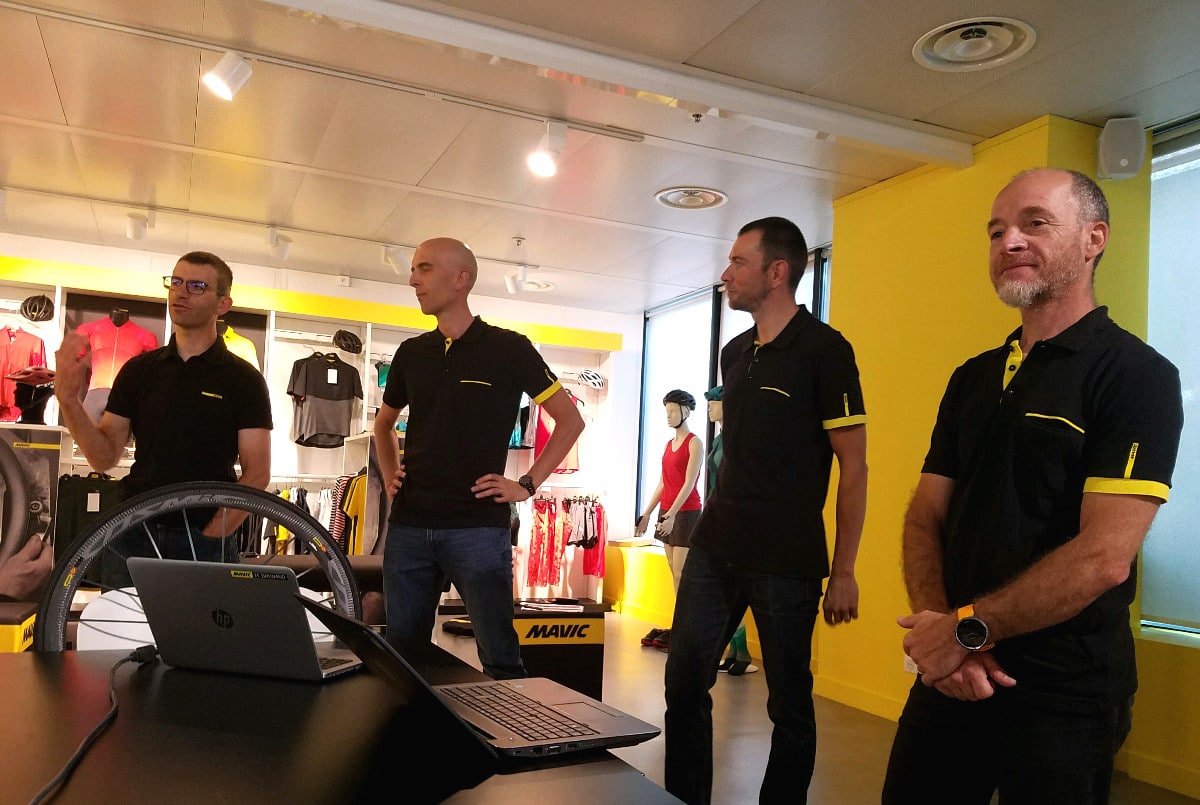 While Mavic had a Cosmic Ultimate in their catalog previously, it was a tubular specific wheel intended for pro riders with no real consequence for recreational riders. This new clincher wheel was a ground-up design to specifically embrace the industry’s growing allegiance with tubeless technology. Mavic is happy to boast that in cooperation with Hutchinson, they paved the way for tubeless technology with their UST design (which is now an open standard for all wheelmakers to use). 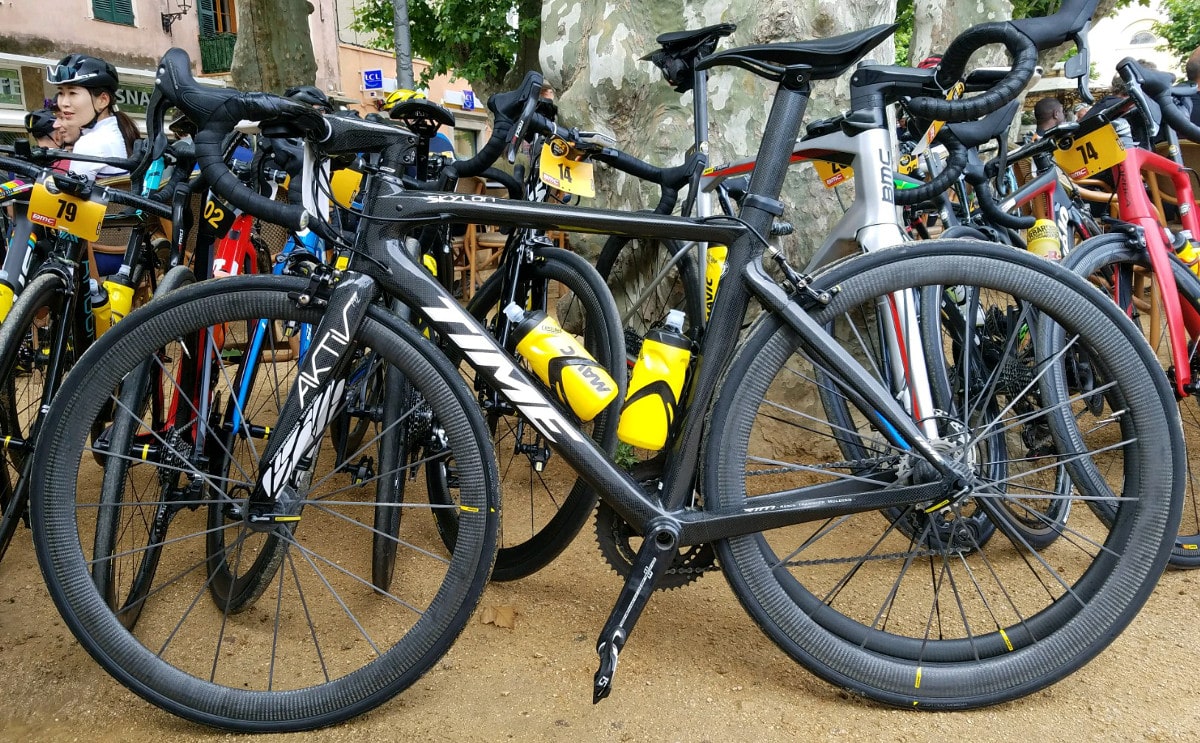 With only five pairs of wheels to use between a dozen journos and nary a scale in sight, we had to take Mavic’s word that a pair of 40mm deep carbon wheels weigh 1310 grams (about 100 grams more than the tubular version). It was nice to see Mavic finally make the jump from their decades old reliance on a 17mm internal rim width to a more contemporary 19mm width (with an external width of 26mm). Mavic says the wheels are optimized to run up to a 28mm tire.

And yes, if you’re an American cyclist you are probably asking the same thing I did just minutes into the presentation – what about a disc brake version? In short, we were told, “It’s coming.” For Mavic, and actually most of the European consumer base, the rim brake still  represents the epitome of high–performance cycling. I get the nod that rim brakes define high-performance cycling as witnessed by history and what most riders in the Pro peloton (currently) use, but not in terms of what high-performance braking can be. 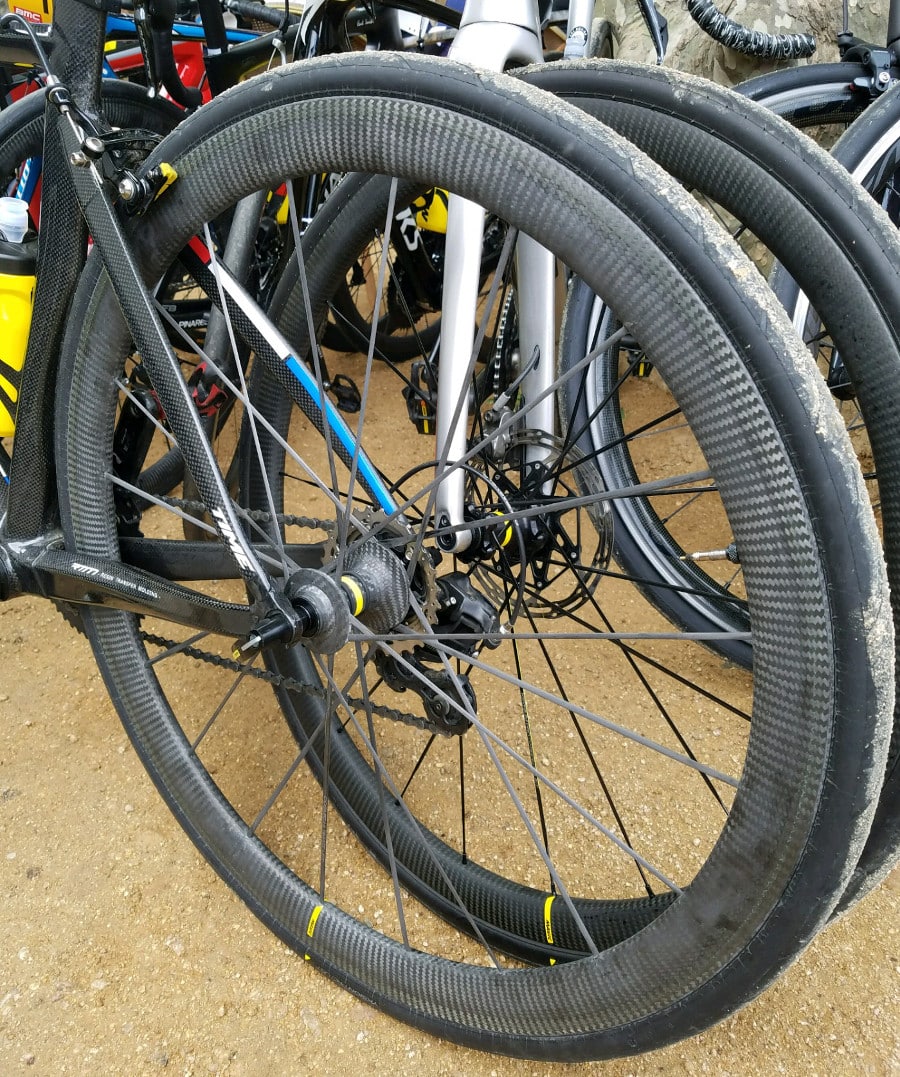 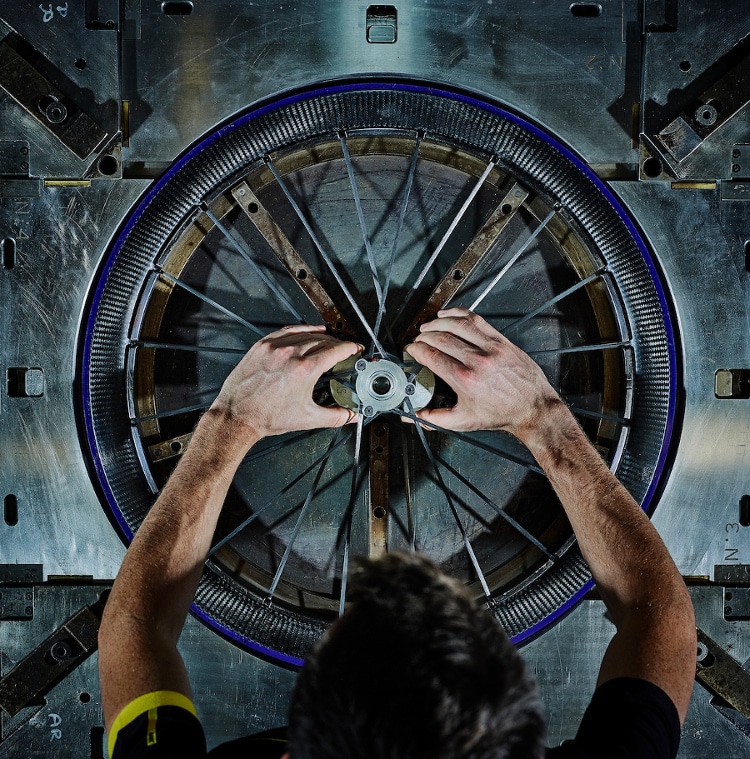 The rims are made with 50 pieces of carbon with a combination of both uni-directional and twill pattern sheets. Inside the hollow rim is a lightweight foam core which aids is required to maintain pressure on the spokes inside the rim during the construction process. The uni-directional carbon spokes have no adjustment and are elliptical in shape to enhance their aero efficiency and save weight. To address the cost of repairing broken spokes, Mavic has a crash replacement policy in effect. 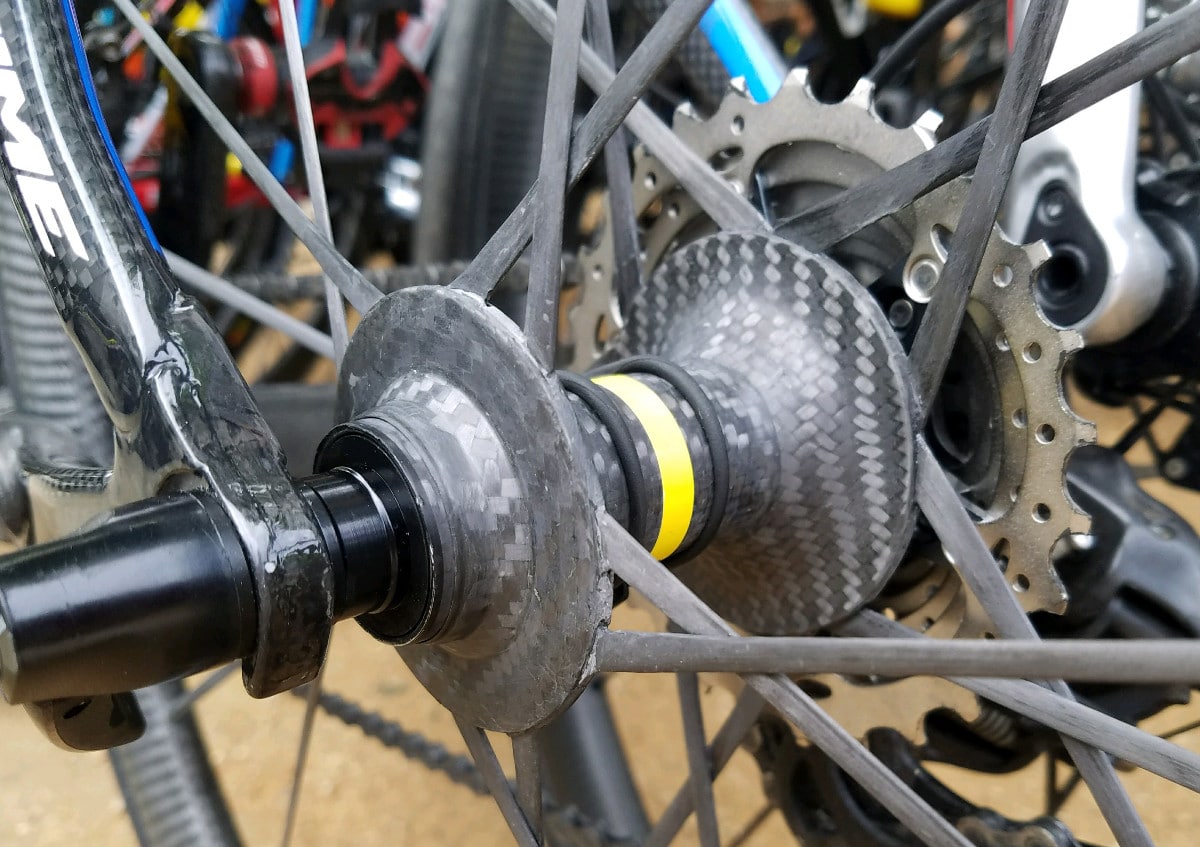 Both carbon hubs have downsized flanges and the rear wheel is markedly asymmetrical to allow for proper dish. Since there are no spoke holes in the rim bed, there is no need for tubeless tape. Braking performance is enhanced with a combination of Mavic’s special iTgMax resin to offset heat build-up and a high frequency lazer beam that strips the carbon its natural slippery surface. As iconic as the required yellow Swiss Stop pads were, new, softer gray pads will be standard with the Cosmic Ultimate. 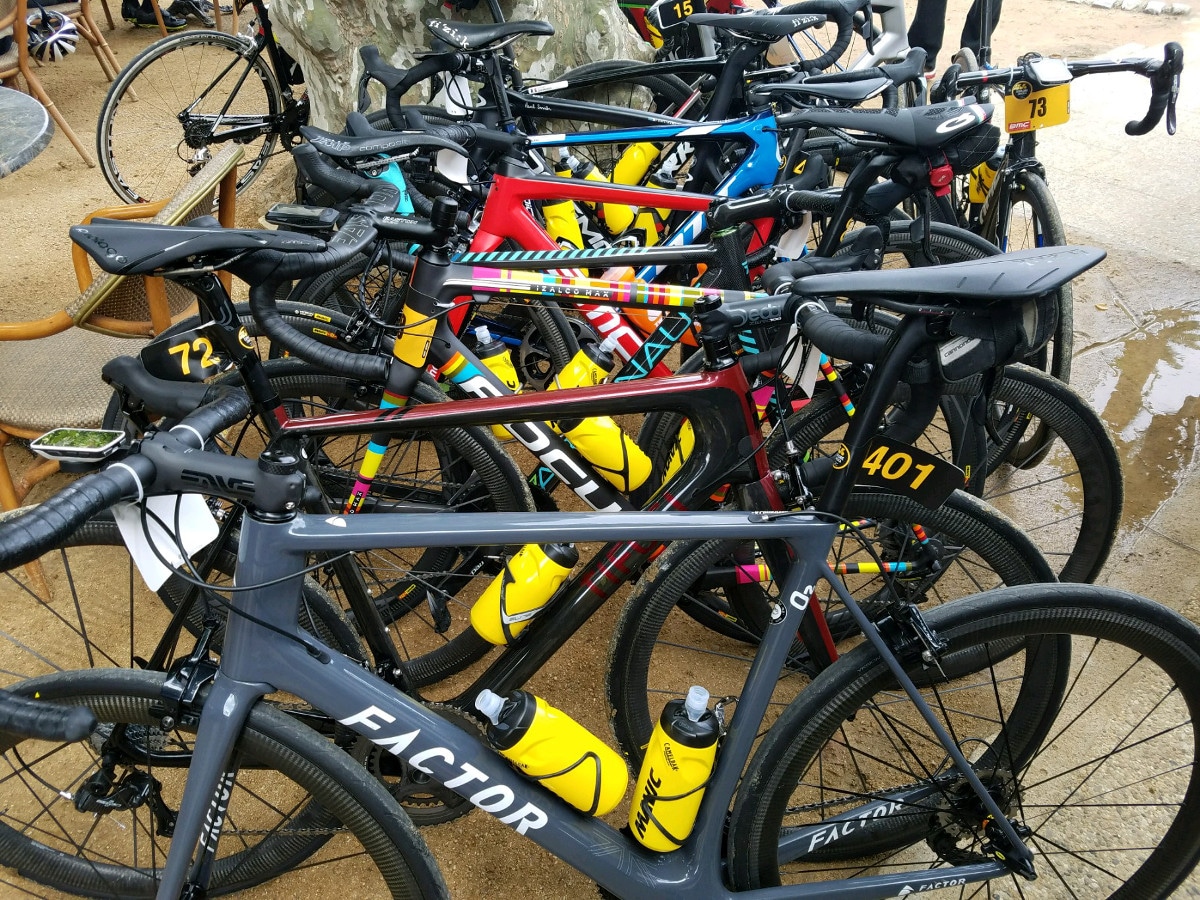 Each 20 spoke wheel is a monobloc structure that really starts as four separate pieces: the rim, two sides of the one-piece (“rim to rim”) spoke assemblies, and the hub. It was fascinating to watch a wheel being assembled in its own painstaking process (our pre-production prototypes were made in Annecy while the production wheels are assembled in Romania).
Simply put, the design and construction of the wheel is nothing less than impressive. Priced at $4250 they are expensive, but unlike some other handmade Euro wheels, the showroom quality level of craftsmanship shows with the Mavic hoops. As an added bonus, included with the wheels are a pair of  Mavic’s own Yksion 25mm tires.

Out on the roads the wheels definitely felt light and quick under the bike.  Thanks to the UST tubeless design, I ran 71 psi (about 20 psi less than I do at home with inner tubes) and nary a flat tire, hard hit, lack of feel or squiggly corner entrance. Despite the lack of hydro rotors, we encountered some screaming 40 mph + descents that were handled quite capably with the old-school brakes. I did miss one turn when I chased a girthy Belgie at speed into a tight blind curve, but was saved from doing an Evel Knievel sky shot by gripping the rear brake lever hard and backing it in ala Mert Lawwill.

The design, technology and manufacturing that went into the Cosmic Ultimate was nothing short of impressive. The racy wheel definitely epitomizes the difference in cycling culture between Europe and America. Laying out that much coin for a rim brake wheel will be an act of true lightweight dedication. As much as we’re looking forward to test riding the disc version, the wheel I left Corsica most excited about was the newly designed Ksyrium Pro. This is a lower line carbon clincher with UST tubeless and a 21mm internal rim width that will cost about half as much as the Cosmic Ultimates and yes, be more representative of our SoCal tech tastes.

The big take-away of course is that over 130 years after Mavic got started, they remain a wheel maker of true significance. The amount of lab work and testing that goes into making their wheels is confidence inspiring. Expensive? Yes, but to see the level of craftsmanship that is required to assemble each wheel is telling. 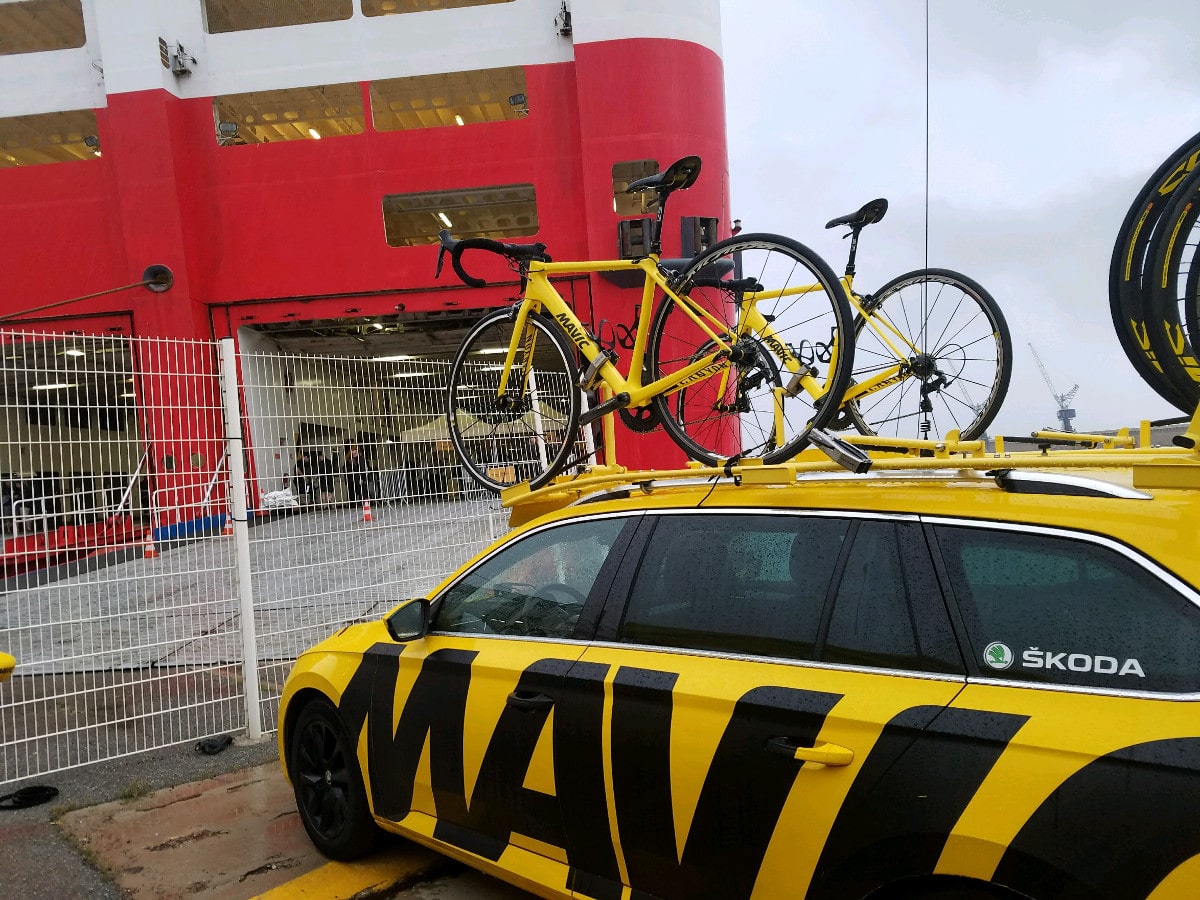 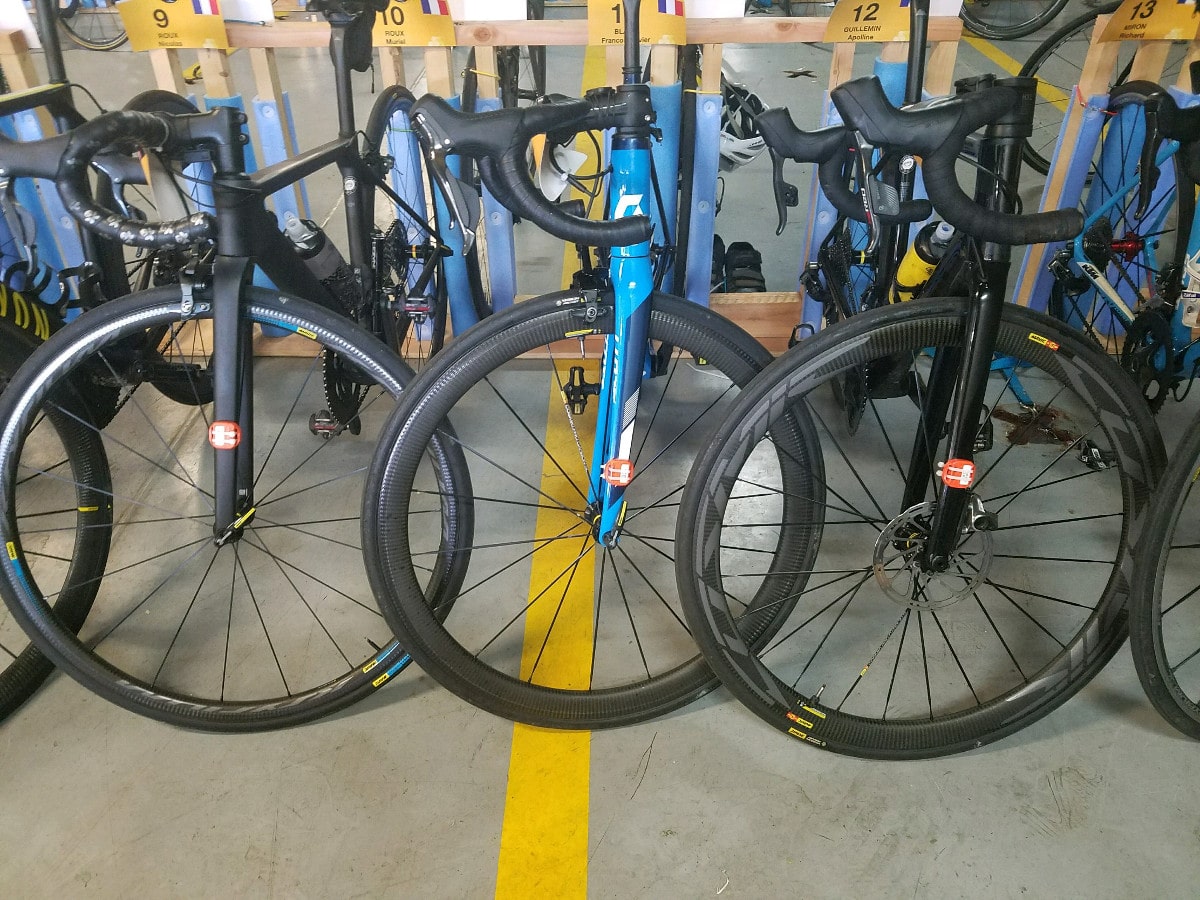 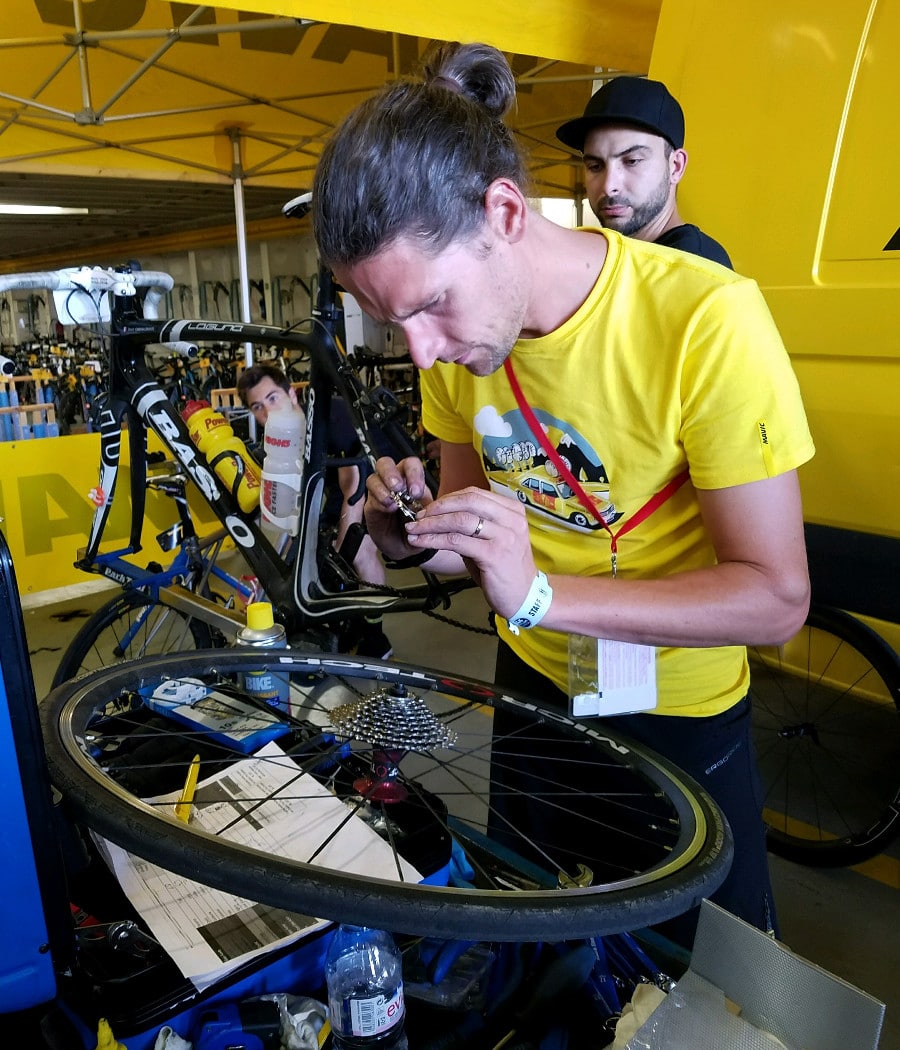 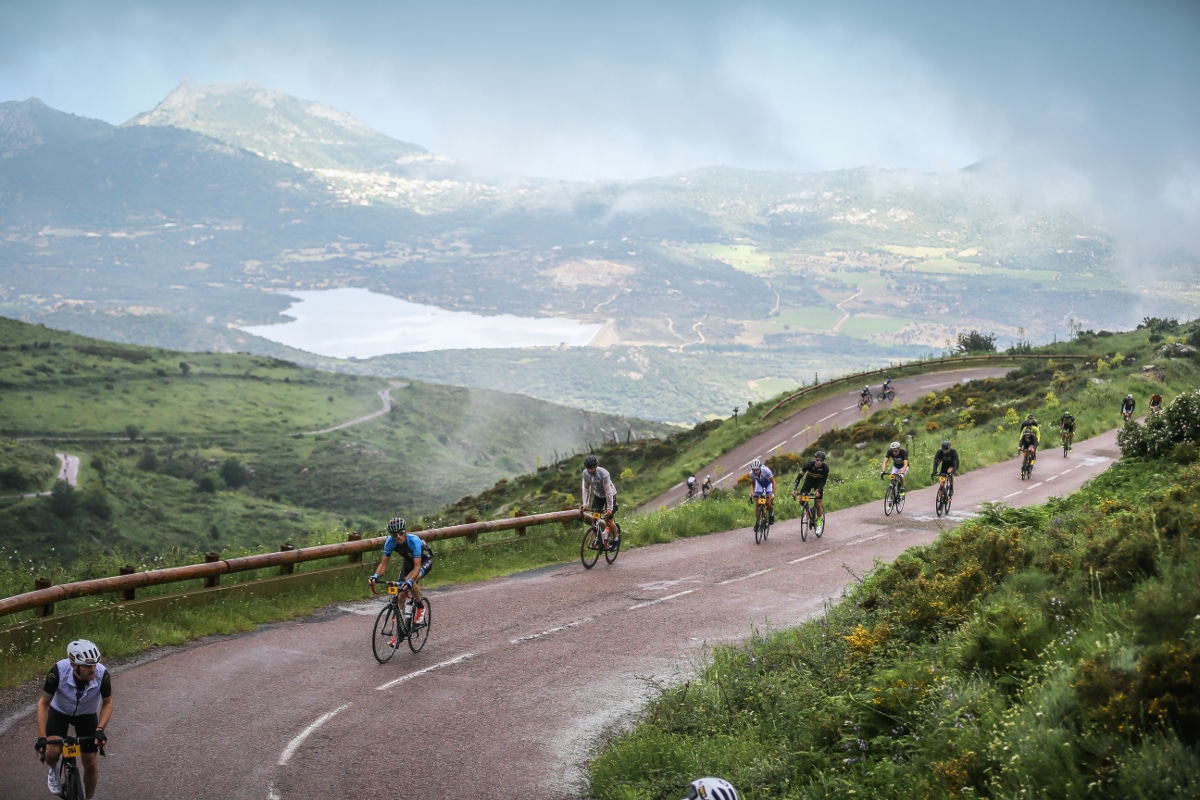 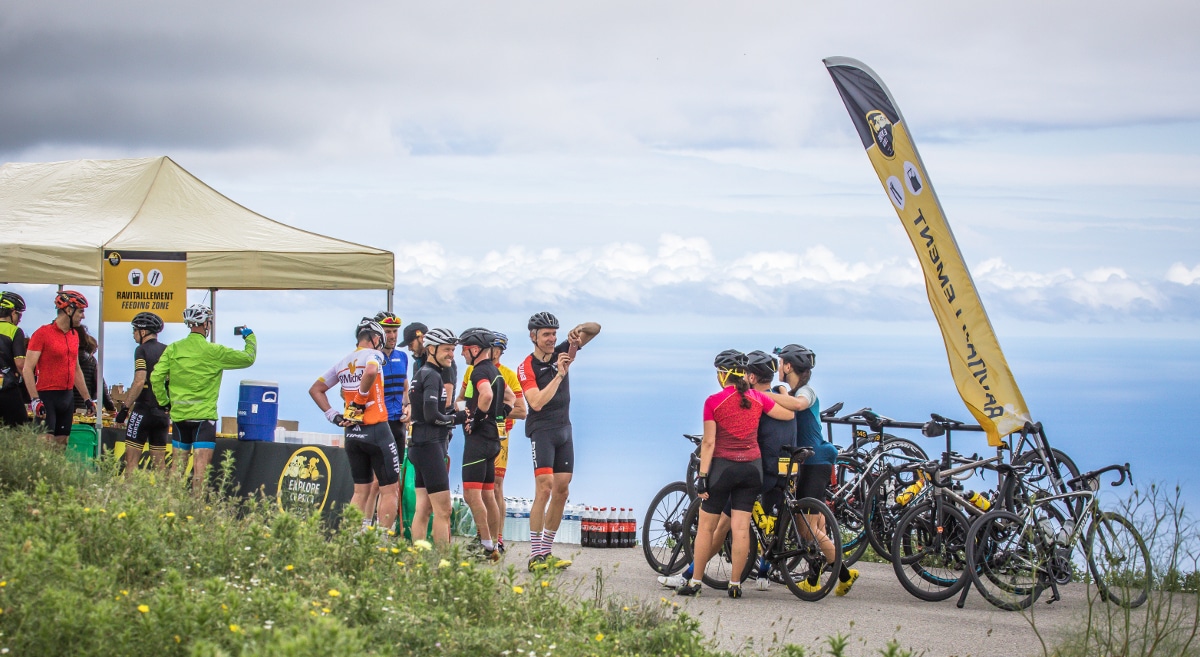 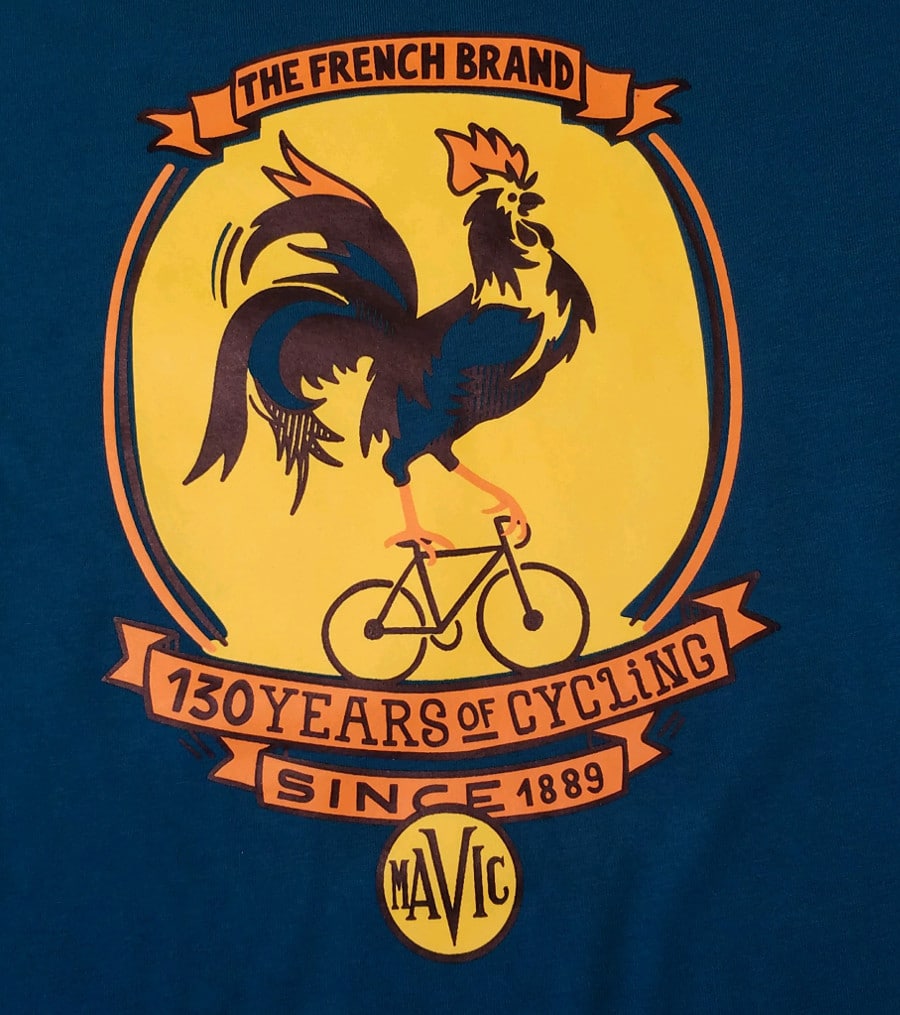