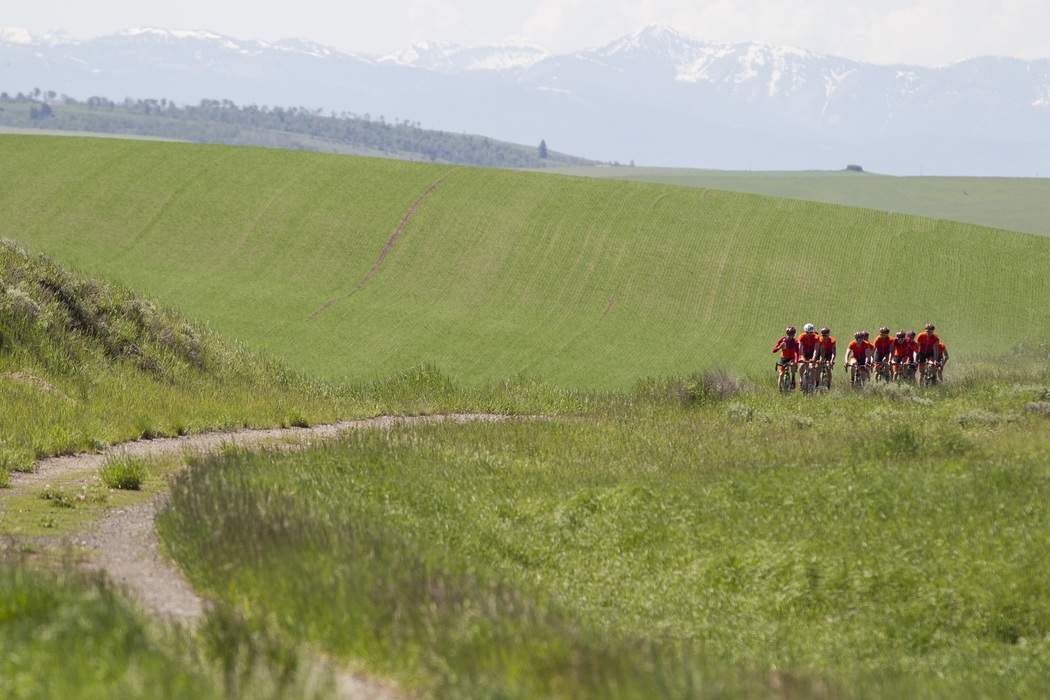 When Mavic introduced the first version of their Ksyrium wheelset way back in 1999, it set in motion the future of complete wheel systems, and can probably be credited with sending a fair few wheel builders to the unemployment line. Continuing to build on the Ksyrium line, Mavic brought a group of journalists out to Jackson Hole, Wyoming, to showcase two new additions to the family. We’ll save the pure road wheel offering for Part 2 of our coverage and focus on the Ksyrium Pro Disc Allroad, a wheel and tire combination designed for the new age of mixed surface road riding.

It’s a slight surprise to see Mavic already on board for such a wheel considering that in Europe taking a road bike into the dirt hasn’t piqued interest quite like it has in the States. But that’s of no consequence according to Mavic’s Maxime Brunand: “We put all our resources into the Allroad and cut development time down from a year and a half to eight months. We understand how important a category it is.”

Key to the Ksyrium Allroad design is a wider rim than what Mavic has ever offered for a road wheelset, with a 19mm inner rim width to help improve comfort and ward off pinch flats. The rim itself is tubeless-compatible, and because the aluminum Zircal spokes thread into the rim, the inner rim bed is completely sealed so there’s no fussing with tubeless tape. A new rear hub called Instant Drive 360 provides compatibility between quick release or a thru-axle with a tool-free end cap swap. The hub will also work with SRAM’s XD Driver body that’s becoming popular now that it’s part of the Force 1 line. Full compatibility between quick release, 15mm, and 12mm thru-axles is also one of the features of the front hub, as are options for 6-bolt and Center Lock disc rotors.

For the past few years Mavic’s complete wheel system has come to include tires, and the Ksyrium Allroad is no exception. Yksion Elite Allroad tires in a 30mm width come stock, and feature a tubeless-ready casing. The 320-gram tires have a very minimal tread pattern on the shoulder with a slick center, obviously designed to keep rolling resistance to a minimum.

For flat prevention, a nylon puncture breaker goes from bead to bead, not just under the tread. Because they are a UST tubeless standard, a Kevlar bead is used rather than a carbon bead like on road tubeless. This makes getting them on and off the rim a whole lot easier, but does limit the tire pressure you can run to a maximum of 85 psi. Although, we can’t see the need to ever run more than that even on the pavement. Mavic is also offering a 28mm version of the Yksion Elite Guard as part of their road tire line, which is non-tubeless.

Something that was a heavy topic of conversation during the trip was rim width and the corresponding tire widths that can safely be used. Mavic abides by the standards that ISO (International Organization for Standardization) puts out based on safety standards. According to the ISO chart, the narrowest tire that can safely be used on a 19mm inner width rim would be 28mm. Going with a wider tire is not an issue, it’s when using a narrower tire that ISO and Mavic feel can lead to problems. “In certain circumstances, like if you have a rim on the low side of the diameter, and a tire on the large end of the diameter there could be issues of the tire blowing off the rim,” Brunand told us. “Many companies, especially in the US, don’t follow these standards though,” he added.

In addition to wheels and tires, a new Ksyrium apparel line was released that uses OrthoLite padding for vibration reduction. OrthoLite is a company that specializes in open-cell foam technology that’s used in insoles by a number of major footwear companies because of its ability to cushion and reduce vibrations. Targeting the three places that your body interfaces with the bike—feet, butt, and hands—Mavic added OrthoLite memory foam to the insoles of the shoes, pad of the Ksyrium Pro Bib, and the palm of the Ksyrium gloves. Mavic claims the new bib pad offers a 20% shock reduction over their previous version.

The initial feeling was that the pad in the bibs and gloves was too think and cumbersome. Though, once on the bike, the pad compressed slightly and wasn’t a problem. Without a doubt there is a difference in comfort with the pads, and is especially noticeable in the Ksyrium Pro Bib. We look forward to spending more time in them at home on a bike and saddle that’s familiar so we can more easily determine the full difference.

GOING ON A GRAVEL HUNT

Mavic wasn’t bashful in designing a ride to really test the Ksyrium Allroads on the terrain that they’re designed for. A 72-mile route with over 50 miles on rocky, dry dirt roads was on tap for the 20+ strong group. The back country riding wouldn’t have even been possible to do without Mavic’s follow vehicles since there wasn’t a 7-Eleven to grab water at within 75 miles of where we were. The roads varied between well-maintained dirt, and un-maintained with ruts and loose rocks.

Typically, for a ride like this I would have ridden a 33 or 35mm tire with file tread for the added traction and flat prevention, so I wasn’t exactly sure what to expect from the 30mm Yksion. Over the course of the ride there were a few flat tires within the group, but considering the mileage and road conditions, that’s not such a surprise. My own experience was great. I would hit the descents at full speed and never felt rock on rim. On a couple of occasions when barreling down a loose and rutted descent I had to remind myself that I didn’t have a full 40mm knobby tire (like I had been used to riding in my prep for the Dirty Kanza 200 gravel race two weeks prior), and to make sure I didn’t get too carried away. I was left surprised with what was capable on a 30mm tire with minimal tread. On the smooth dirt, the lack of rolling resistance and efficiency of the profile was welcome over a bulkier tire, especially when we hit the pavement for the final 20 miles back to the hotel.

Wheel stiffness is impressive, like the rest of the Ksyrium wheels, and the low-weight of the tires helped them feel quick when accelerating. The wheels themselves aren’t necessarily the lightest on the market, but their durability and quality is not in question since it’s much of the same technology that’s already being used on other Ksyrium wheels, just with a wider rim width.

As far as downsides go, the only thing that comes to mind is the limited number of bikes currently on the market that could fit a 30mm tire. Cross, gravel, and some endurance-geometry bikes should be fine, but some people will find the 28mm tire width is the only way they can use the Allroads, though the 2mm difference in width and lack of tubeless would limit capabilities. As mentioned previously, using a wider tire than the stock 30mm size isn’t a problem, so going with a more robust option is easy, it’s just not yet found within Mavic’s tire line.

Look for Part 2 of our Mavic event coverage where we’ll have a ride report of the new Ksyrium Pro Carbon SL road wheel, pictured below.