Electric bikes are gaining a foothold with roadies 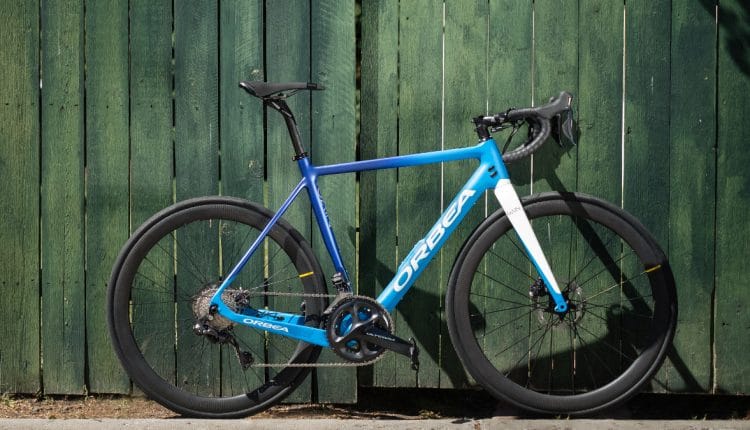 Days after attending the launch of Orbea’s new carbon fiber Gain e-road bike in Sun Valley, Idaho, we were back on our local SoCal roads in Griffith Park pedaling up some hills on our good ol’ fashioned pedal bikes. As we rounded a corner past the train rides, we were suddenly passed by a pack of eight riders, two who were riding e-bikes. As we quickly sat on their wheels to steal some speed I rolled up to one older gent and asked him what he thought of his shiny red Trek e-bike.

Without hesitating, the guy looked at me a with a big, broad smile….“IT’S A GAME CHANGER!” before he preceded to go on and tell me what’s become a very familiar story. “I’ve been riding road bikes for years. I retired when I was 60 and kept riding. But when I turned 62 it just got a lot harder….turns out my heart had some ailments that riding my bike was not helping. I got an e-bike and I’m back riding with my friends again. Today we’re doing a 40 mile ride. The e-bike  has been awesome!”

And there it is. Bad news for some, but good news for so many others…pedal-assist e-bikes are continuing to grow in popularity and profit. More specifically, pedal-assist bikes with drop bars are finally coming to the fore with new models from stalwart road bike brands like Focus, Pinarello, and Trek,  and newcomers like Yamaha and now Orbea. 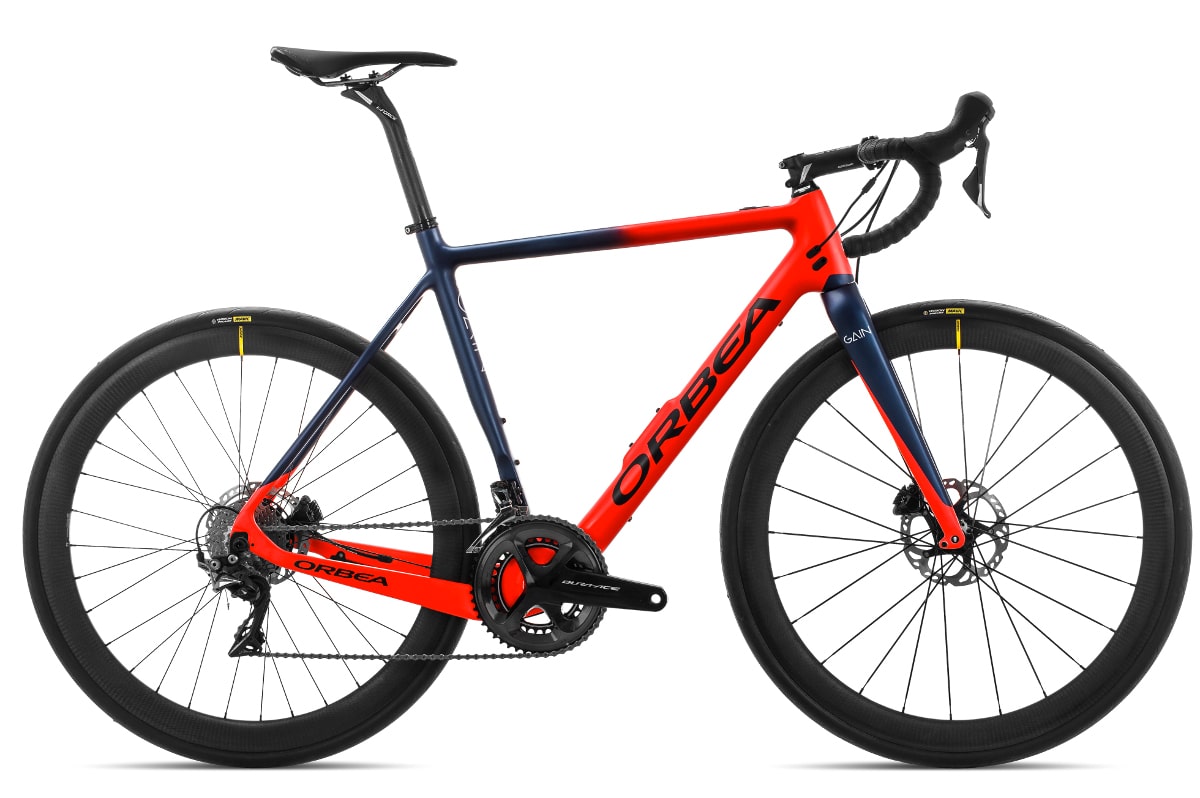 So now Orbea, a legacy road bike brand from Spain, has jumped into the market with an impressive line-up of carbon e-bikes (they call “hybrids”) that stand apart for their use of a rear hub motor versus the more popular mid-drive units used by a majority of their competitors.

For all the effort that the bike industry has expended to make e-bikes look less like an e-bike and more like a standard bike, Orbea can claim to the most successful. The Gain’s profile is as svelte as any traditional carbon road bike. Although the bike wasn’t weighed in front of us, Orbea is claiming a 24.9 pound weight (w/o pedals). Impressive. 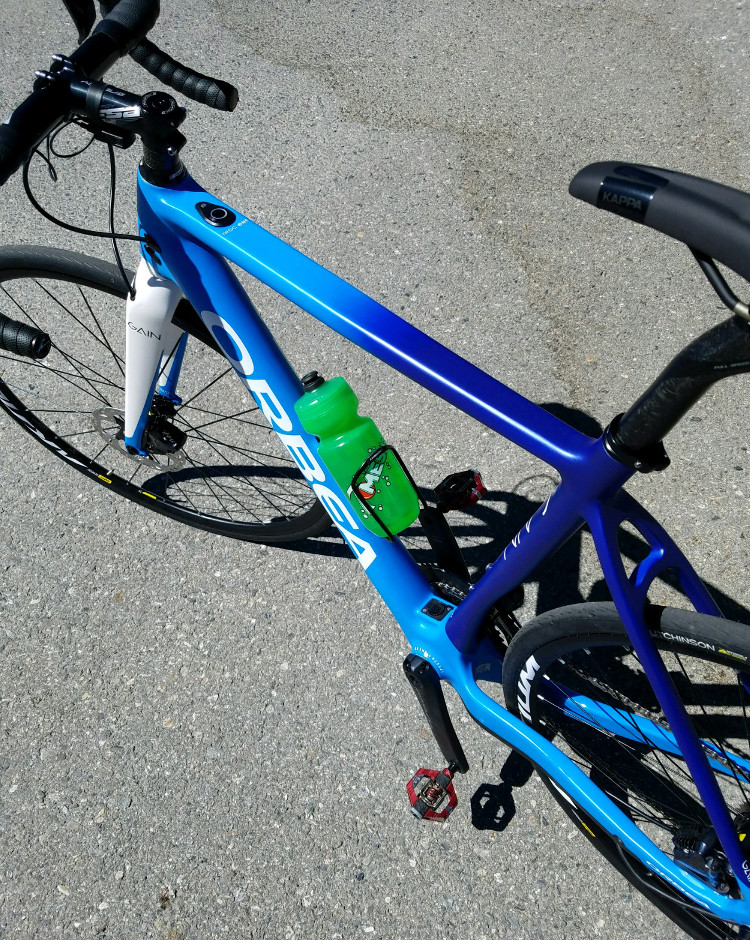 Orbea actually launched their new e-bike platform last year in Europe only and with an aluminum frame. With their exclusive one year deal with their motor vendor about to expire. Orbea is now ready to go big with a five model launch of the carbon framed Gain. Talk about a “game changer!”

As has become the latest trend with e-bikes, especially e-road bikes, Orbea gave soime thought to the bike’s overall aesthetics and stashed the battery inside the downtube. Key to the Gain’s talking points is its use of a rear hub motor from a Spanish automobile company called EV Motion. The choice of a EBike Motion powerplant runs contrary to a majority of e-bikes which rely on mid-mount motors and battery combos with standard rear wheels. The X35 motor is powered by a 36V/6.9 AH battery and depending on the power mode and rider weight, Orbea claims a rider could get up to 100km of “autonomy”. 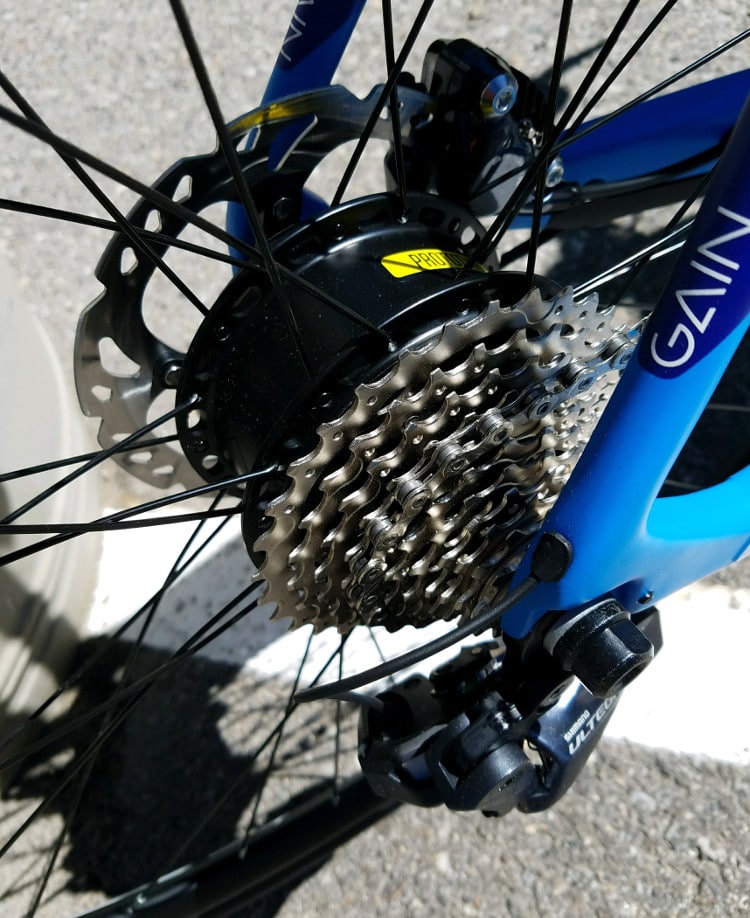 Convenient for everyone who sees the need to mask their use of an e-bike, the Ebike Motion hub motor is well hidden from view by the disc rotor and cassette. 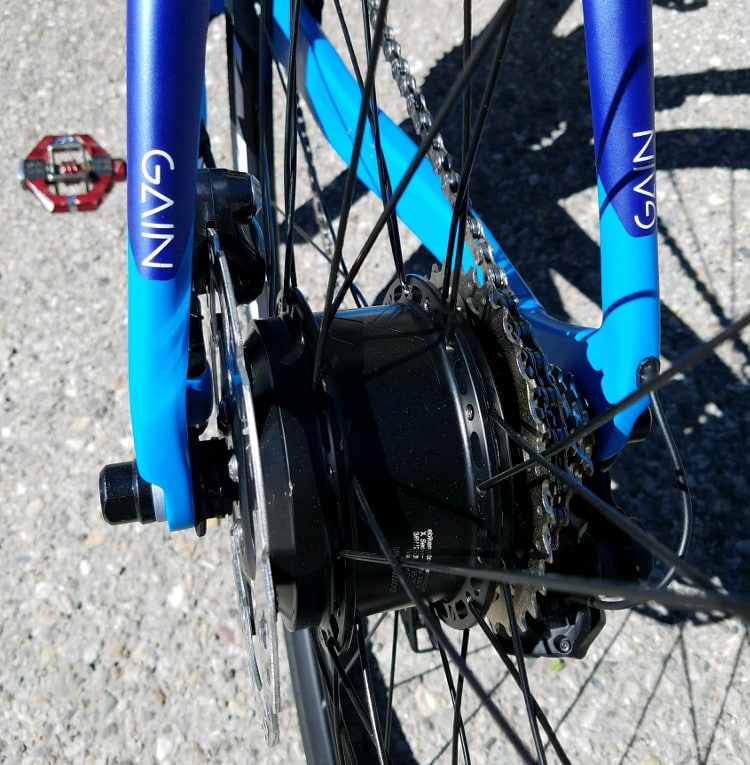 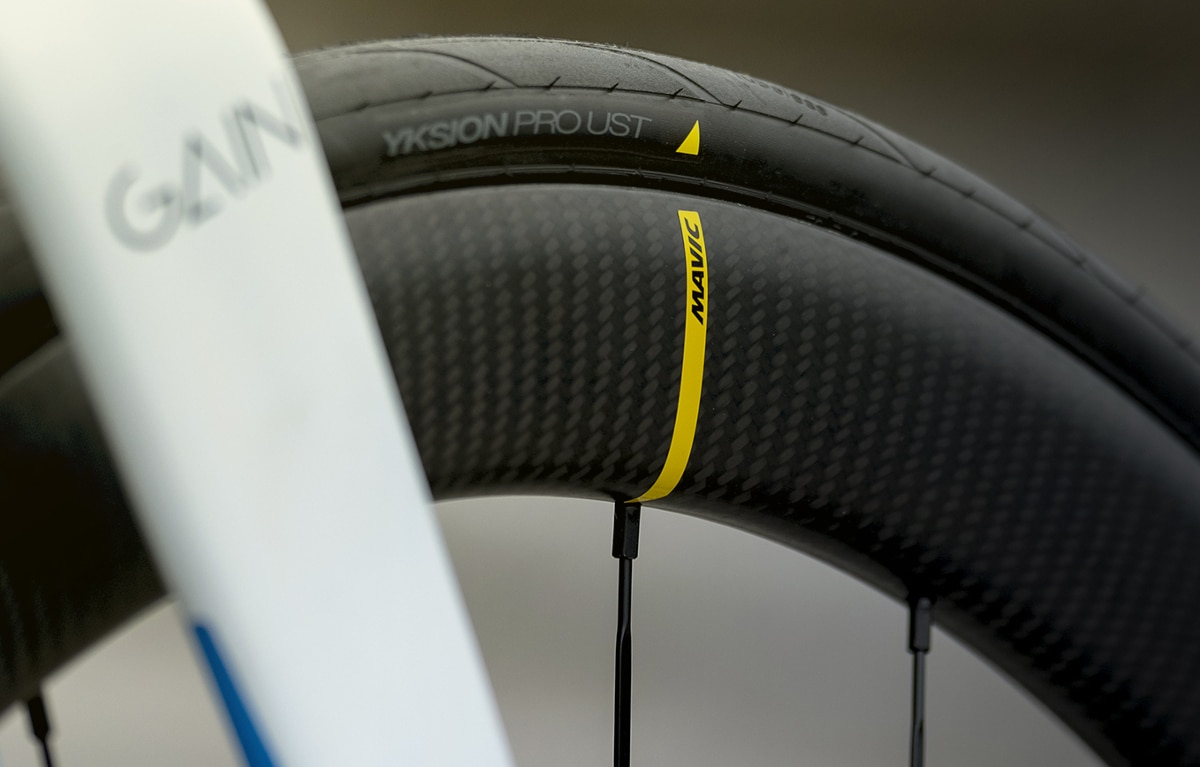 Orbea teamed with Mavic for some specific 32 spoke e-bike wheels. The higher end models will use the e-bike version of the carbon Cosmic Pro while the entry-level bikes will use the aluminum Aksium. 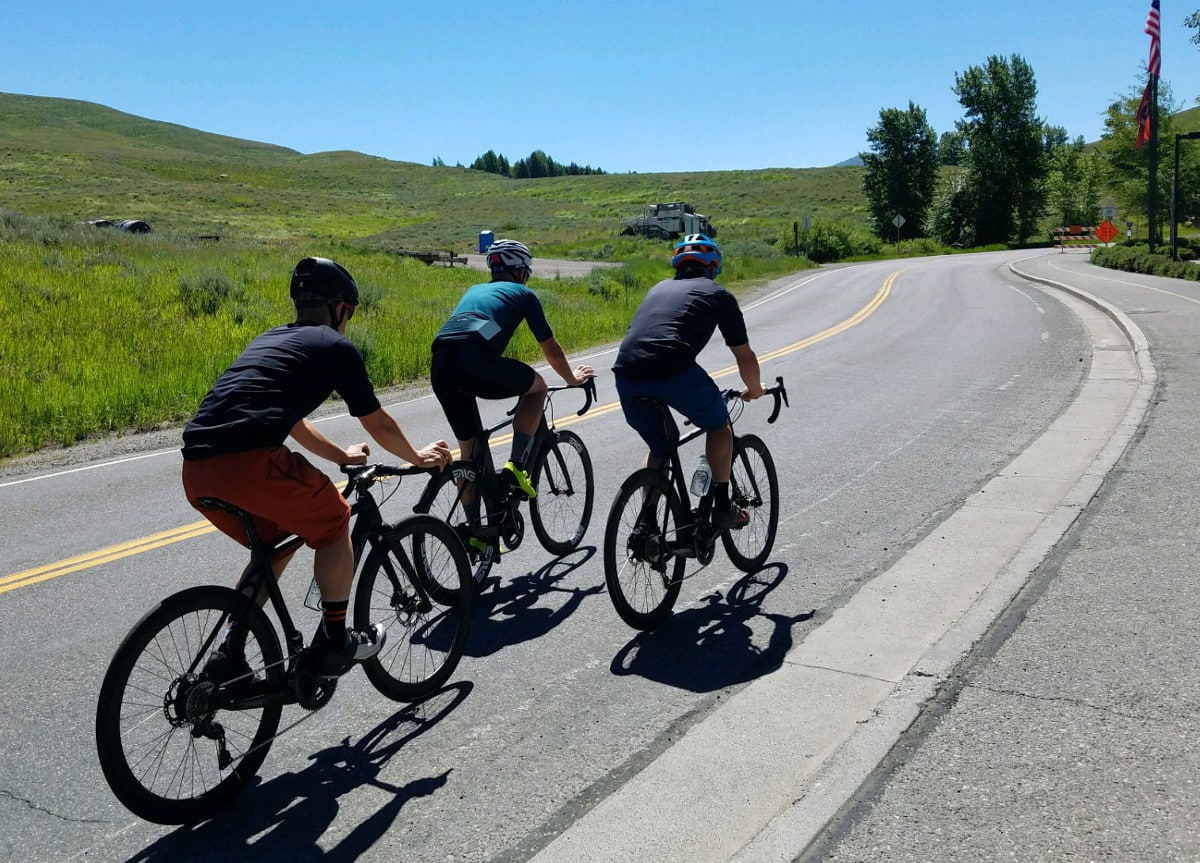 To avoid those moments of fumbling with the top tube mounted power mode button, our advice is to set it before you start pedaling. Once rolling, the Orbea Gain offered a smooth, fluid surge of power that was never abrupt or jolting. Over the course of a few different climbs, we were able to grab at least one extra gear (and often two) every time we switched to the red mode. 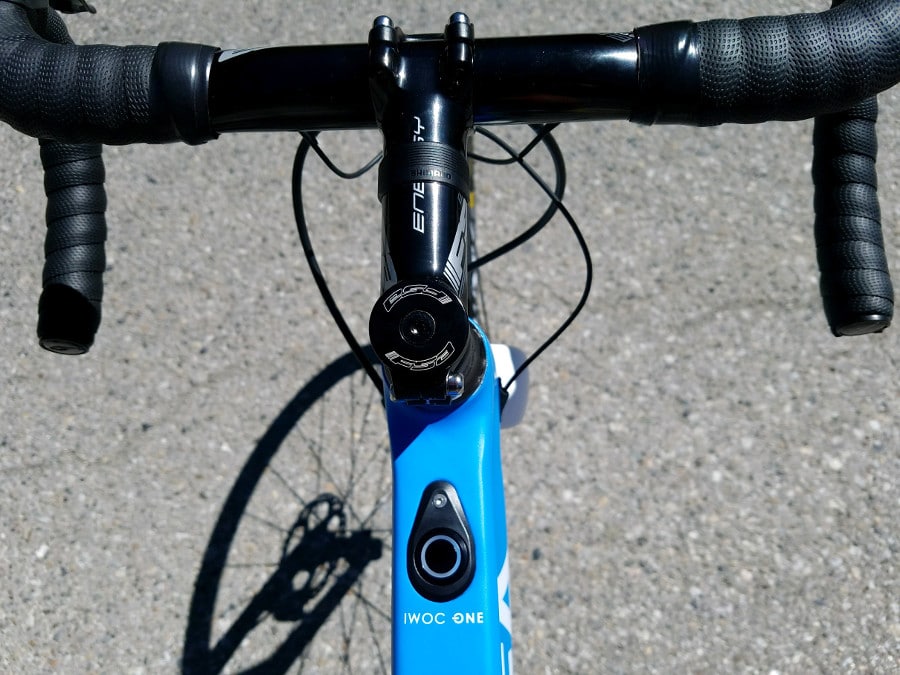 If there was one word to describe the Gain’s operating system, it would be “simple”. Both the on/off and power mode functions operate with a single push button located on the top tube. There is no separate display function other than a sequence of different colored LED lights to indicate which power mode you’re in (clear/off, green/fast, orange/faster, red/fastest) that you have to push through.

Simple as it is, it was hard to be sure which power mode you were in while riding and – like texting while driving a car – you would have to take your eyes off from where you were riding to toggle through the color coded modes. 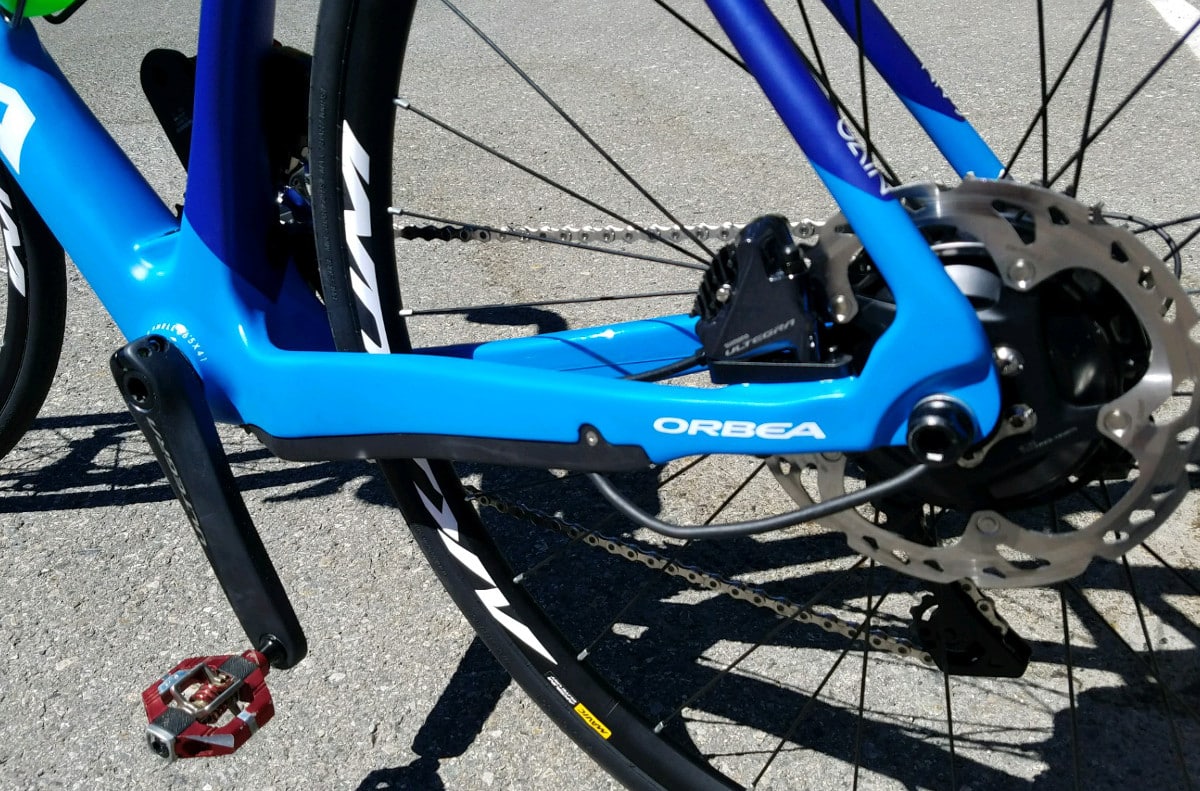 Cables are all internally run with the most important being the cable that operates the Pedal Assist Sensor.

The rear hub is also home to the 20 magnets (located internally on the drive side) that monitor your pedaling input and adjust the power feedback accordingly. 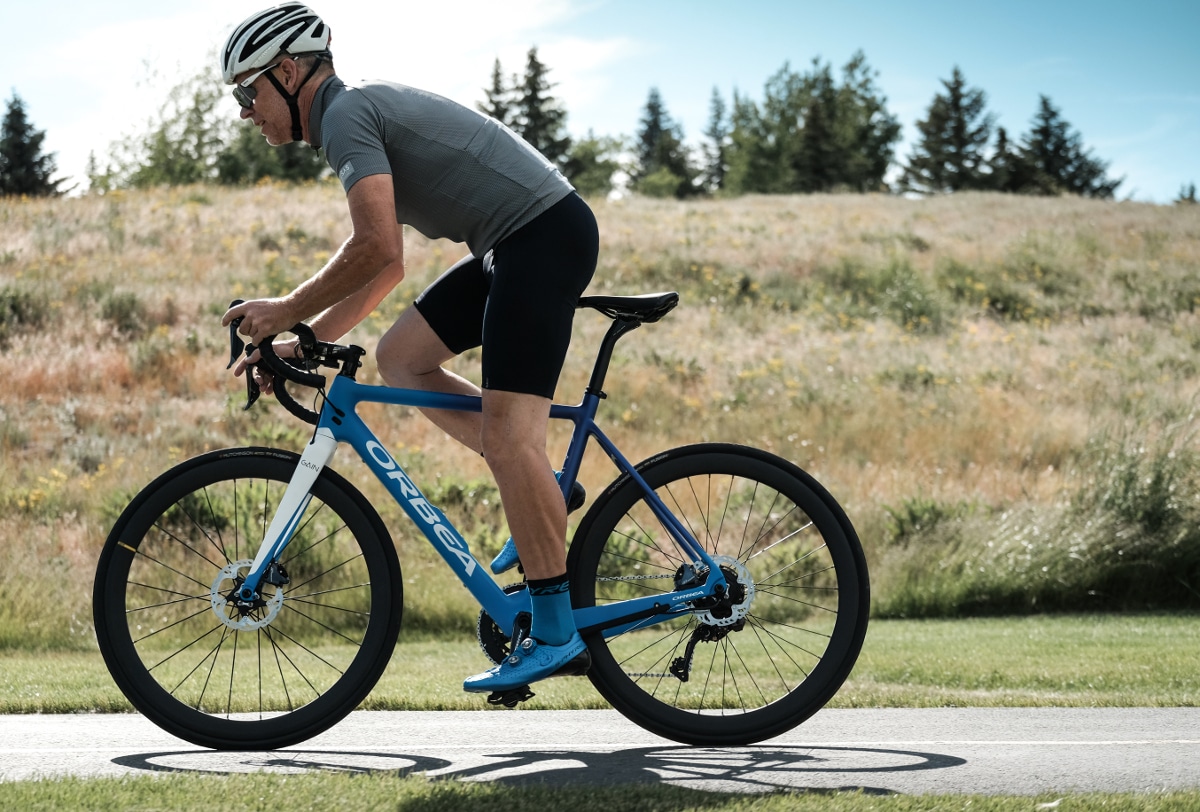 Is that an e-bike or are you just that much stronger? Hard to tell isn’t it?! 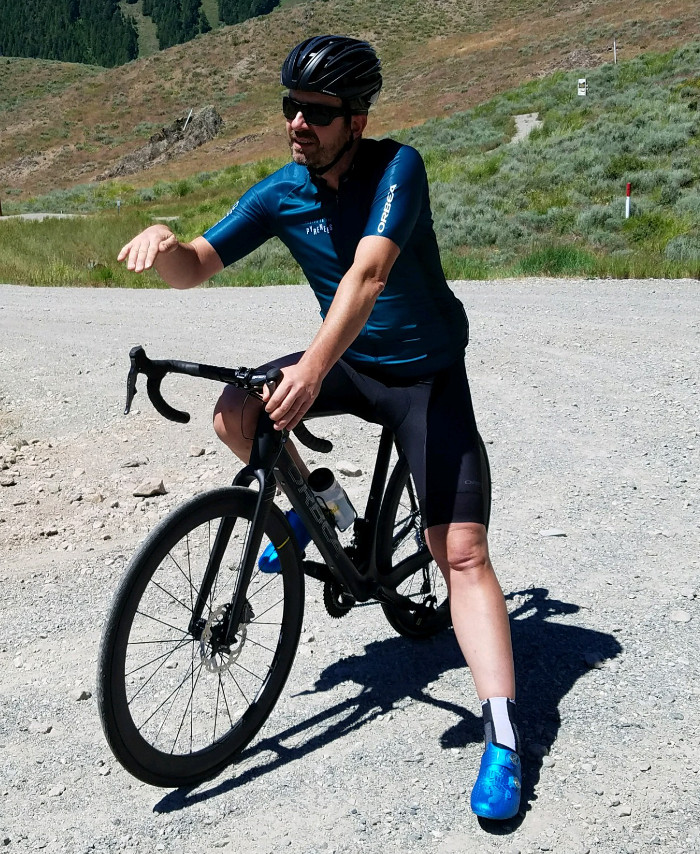 Jon Gantxegi is Orbea’s product manager for the Gain and mid-way through our test ride he stopped to fill us in on the Gain’s tech points. He first started experimenting with e-bikes back in 2010 when he rode a bike that used a Bionix rear hub motor system. The first Orbea prototype was hatched in 2016 that used a hub motor and two RC car batteries crudely strapped to the downtube. Aesthetically speaking, the production model is a night and day difference and the frame is as well finished as any hi-end carbon bike. One of the more important features Jon pursued with the Gain was to optimize the bike’s handling for out-of-the-saddle pedaling. 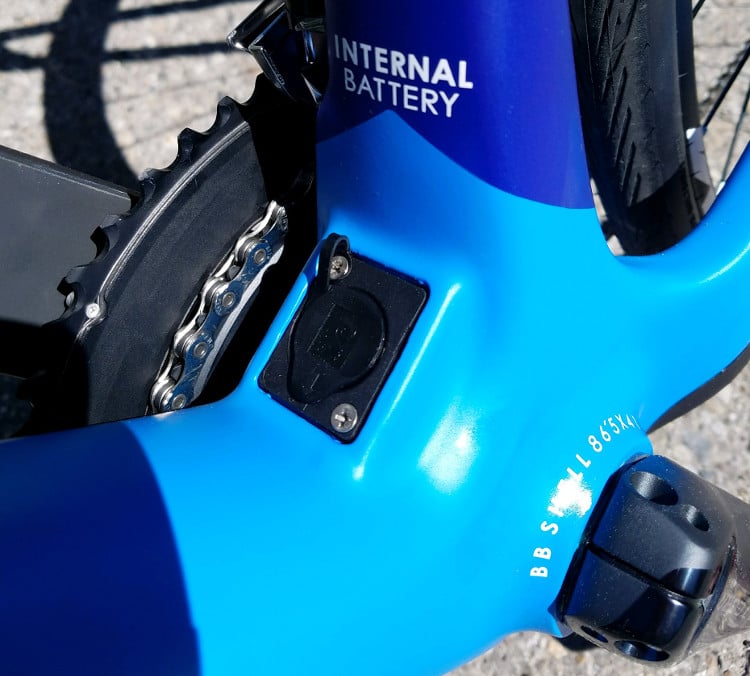 The Gain’s charge port is located at the base of the down tube and uses simple 6 pin plug-in. There is also an accessory battery (shaped like a water bottle) that can be used to extend the bike’s range.

Although not available in America, the Gain can also be had through Orbea’s custom build/paint program. Four road models (each available in 5 sizes) will all run with Shimano drivetrains from the $4400 model with 105 to the $8730 Dura-Ace level. Although not shown in our press material, there was also talk of a gravel version in the works. We were told the bike could fit up to a 40mm tire.