Bob Parlee has made a swathe of performance machines, his first claim to fame came by designing high-performance sailing boats for the America’s Cup series. Parlee took his knowledge of carbon craftsmanship and applied it to two wheels in 2000. In recent years, Parlee has adapted disc brakes and wider tire clearance across most of his offerings, he even added the Chebacco, a gravel bike, to his road and time-trial-focused catalog. Last year Parlee teased a concept aero road bike at the Sea Otter Classic. The concept frame turned heads with its aero fairings and sleek lines.

Parlee focused the design of this concept bike, now named the RZ7, around aerodynamic efficiency and on-road compliance all the while keeping weight savings in mind. A size medium RZ7 frame has a claimed weight of only 870 grams. Parlee uses a proprietary design of truncated airfoil-shaped tubes called “Recurve” like many of the big name brands Parlee has found the shape offers better performance at the most common angles wind hits the frame as well as a bit of weight savings. 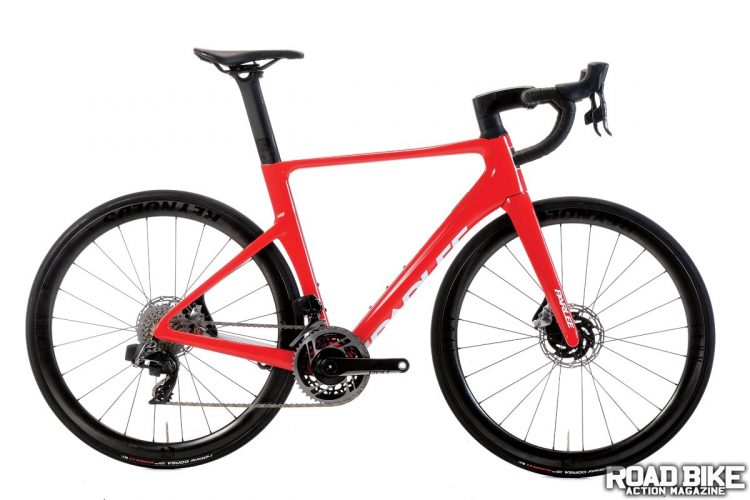 Bob Parlee’s extensive knowledge of frame design paired with the SRAM AXS components and Reynolds wheels create a refined ride quality in the RZ7. Our experience on the RZ7 garnered some nods from the pickiest test riders we have. On paper the RZ7 appears to be an endurance-oriented aero bike, the 99.8cm wheelbase paired with the 73.15-degree head tube angle creates a relatively responsive ride. What impressed us most was how responsive the RZ7 was set up with its 28mm tires.

Cornering the RZ7 hugs the chosen line and begs to lean over in sharp turns. On our local winding descent, we were able to lean further into apexes which allowed us to better hold our speed. We were able to record top ten segment times consistently and even earn a Strava KOM on the segment which was previously attained on a BMC Timemachine Road (RBA March 2019). Head-to-head against the Felt AR on this segment, the Parlee consistently finished 2 seconds ahead.  The Parlee’s 28mm Vittoria Corsa 2.0s measure 30mm on the rim. This keeps the overall ride quality smooth with an added sense of control.

Our favorite road groupset of late is the SRAM AXS system. Its major benefit comes while climbing. The one-to-one gear ratio allows a higher cadence than offerings from Shimano and Campagnolo. This makes holding speed up steep grades easier for us especially on days we aren’t feeling our best. While the Red level group on the RZ7 is expensive, SRAM’s mid-range Force components have the same gear range at about half the price.

Hard efforts are aided by the stiff cockpit. Rocking back and forth on the handlebar there is no noticeable rotor rub from the fork which is often a knock on disc brake bikes. Top speeds are reached in the 46-10 gear which left us spinning out around 36mph. While it’s fast enough for most situations the Felt has a speed advantage on downhills and in sprints thanks to its semi-compact gearing.

The 28mm tires opened up fire road riding, why bring an aero bike on the dirt? Well, it’s fast and hey, they do it in Europe just look at some videos of Spring Classics like Strade Bianche. The RZ7 can tackle the dirt and small rocks better than its narrow tire competition. We found ourselves passing mountain bikers with full-suspension bikes and full-face helmets on the climbs. However, when the fire roads pointed downwards we had to carefully select our lines to avoid holes and sharp rocks. On the same roads on the Felt, we were more often jostled around and noticed much less compliance.