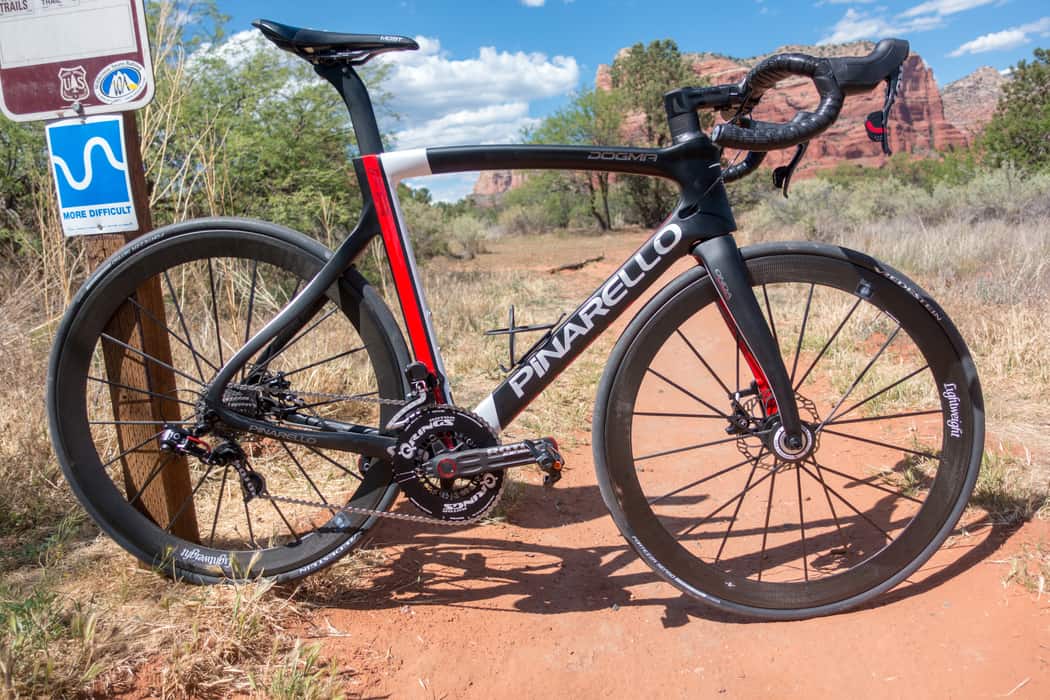 After the long awaited announcement of Rotors’ UNO hydraulic drivetrain last year, we finally had the opportunity to test the system and see if all their time and hard work paid off. Why hydraulic you ask? Funny, when we arrived at the press event in Sedona, Arizona, we had the same question on our minds as well.

According to Rotor, they’d taken a look at everything they thought was wrong with the current systems and started with a fresh idea. Mechanical cables and housing systems rely on the shifter to hold gear position with a cable that stretches over time and needs frequent adjustment. This system also will continually degrade in shift quality as cables and housing wear out.

As far as electronic actuated systems are concerned, Rotor sees them as having  inherent drawbacks as well. They use batteries that need frequent charging and are an added weight to the bike and system. The small motors at each derailleur leave room for failure in adverse weather and terrain conditions.

Rotor’s answer to this is hydraulic actuated derailleurs with hydraulic brakes to match. They have taken the low maintenance of hydraulic technology and adapted it to actuate the derailleurs. The derailleurs themselves control the gear position, not the shifter, and Rotor claims this allows for a perfect alignment with every shift. What this allows is the ability to control the gear position without the shifter, in the case of a malfunction or just a quick adjustment.

The closed shifting system uses a 3mm hose and a 30% Glycol solution for more stable shifting in a larger temperature range than non-glycol hydraulic fluids. This is important because there is so little fluid in the entire system. The 3mm hose makes for very easy cable routing and is not affected by tight turns and cable routing otherwise only feasible by Di2.

HOW IT WORKS
The shifting actuation is similar to SRAMs DoubleTap where a long stroke on the right shift lever gives you the larger cogs in the rear while a short tap of the same lever steps one gear at a time down the rear cassette. Depending on how you have the rear derailleur set up, the long stroke can shift anywhere from one to four gears at a time. There is a small set screw located on the derailleur that can change the maximum number of shifts per stroke. The front derailleur is controlled by the left shifter and the long stroke moves the chain into the larger ring in the front and the short push moves the chain down to the small ring with a trim position if needed. With Rotor best known for their Q-rings they have designed the front derailleur to seamlessly adapt to both traditional round rings and the most extreme oval shape of their Q-rings.

THE RIDE
After getting the full run through on how it all works and best practices we were ready to ride. The Rotor rep suggested we start in the single shift mode in the rear. First impressions were good with the hoods having a very nice feel and shape. The first few shifts were confusing because you’re physically moving a lever but don’t have a distinct gear change click or feedback. This is due to the fact that the shifter itself is only pushing a small amount of fluid down to the derailleur where it controls the gear position. After a few runs through the cassette I had it down with no problems other than trying to get more than one gear at a time when going up the cassette.

After a short time on the road I pulled over to the side of the road and opened the set screw on the shift control to allow the maximum of four. This was a whole new animal and took a bit more time to get used to. Not because it was different but because the distance you push the lever indicates how many gears you get. The odd nature was the lack of feedback (or a click) with each gear change as we’re accustomed to with mechanical shifting.  Eventually, I got it figured out with minimal over-shifting.

The shifting felt a bit heavy, similar to the feel you get with Campy’s mechanical system. This was a bit surprising because when we think of hydraulic we think easier and effortless. After talking to Rotor about this they explained to still have to move the spring that is in the derailleur and if the spring was lighter then there would be a larger chance for miss shifts. Unlike a cable system where you can implement leverage points to make the shifting feel lighter, on a fluid driven system this is not an option.

All the bikes were equipped with Rotors Q-rings and we had no complaints or difficulties shifting in the front with the extra-large and stiff back plate on the front derailleur to move from the small ring to large ring. We got a few additional rides in that were all very consistent and with each outing our level of adaptation increased.

THE BRAKES
Rotor has teamed up with Magura to integrate their long history of producing hydraulic brakes (and the road caliper brake they’ve had out for a few years) to compliment the Spanish drivetrain. With this help from Magura the entire braking system is a direct reflection of the systems they already offer in different applications. The Rotor system will come in two versions to start with, there will be a rim brake version borrowing from the HS33 urban and RT8 with a few modifications as well as a disc brake version borrowing from the MT8. Both braking systems are using Magura’s royal blood mineral oil that is not hydrostatic meaning it does not attract water. Both are using a 5mm hose to move the fluid from the lever to the brake as this gives the brakes a better feel and modulation.

While the disc brake version is an open system allowing it to dissipate heat more efficiently, the rim brake version is a closed system as there is little to no heat buildup on the caliper. The rim brake also uses a hydraulic indexed QR that ensures easy wheel removal & compensation for pad-wear or alternate wheels with a different width. The disc version will first come in a post mount version only with a flat mount version soon to follow for compatibility on all frames.

OVERVIEW
Rotor’s approach to the road bike drivetrain is unique, but also functional as it solves a lot of the industries small, but inherent problems. Still, while this sets Rotor apart from the other drivetrain offerings that already exist, it isn’t without its hesitation. As hydraulics are relatively new to the road category there will be many consumers that fear the unknown. Hydraulic systems need very little maintenance and when they do it’s usually caused by misuse. With shifting being something that is hard to misuse and it being a closed system we can see very little to almost no maintenance needed after the intitule setup.

Of course like all systems you will need to keep routinely cleaning and replacing the chain and cassette, but similar to the electronic systems, no more sticky cables and rebuilding bikes after riding in adverse weather or conditions.