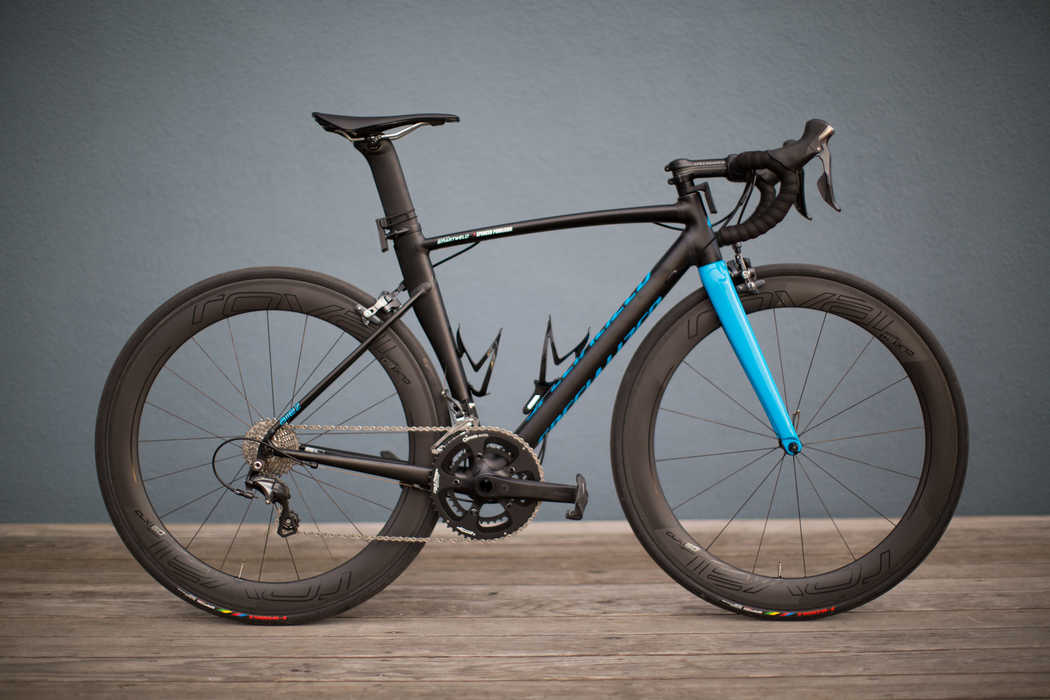 Spending a few days in Santa Cruz, California has become an early February tradition for the past couple of years now that Specialized has decided that renting a beach house and planning two big rides gives a handful of us cycling media types the best opportunity to get on some new product in a relaxed atmosphere. Though we can’t talk about everything that was shown to us during the Specialized Winter Camp just yet, there were a handful of new accessories, some apparel, and one particular bike that we spent over 100 miles on, the aluminum Allez DSW Sprint X2.

Specialized added to their Allez DSW line last year with the introduction of the Allez DSW Sprint X1 that was available in a SRAM single chainring  version oriented toward criterium racers looking for a super fast setup that didn’t break the bank. Rather than sticking with the same design of the standard Allez DSW that closely resembles the tube profiles of a Tarmac, the Allez Sprint takes a more extreme design angle in terms of bottom bracket stiffness, geometry, and aerodynamics. But because the Allez Sprint X1 lacks a front derailleur mount, it cannot be retrofitted with a double chainring crank. Now, the Allez Sprint X2 solves that problem and makes it much more friendly in terrain that has anything that resembles a climb.

DSW in the name stands for D’Aluisio Smartweld, which is a process of hydroforming the frame’s individual tubes to create a seamless and uniform weld location. This process was first introduced on the Allez a few years back, but only at the head tube junction, while the latest Allez Sprint now includes the same DSW design at the bottom bracket as well. According to Specialized’s aluminum guru, Chuck Teixeira, “the new bottom bracket structure allows it to be ‘carbon stiff’, and is 30% stiffer than the current S-Works Allez”.

Geometry is very much oriented towards those wanting an aggressive position considering the front-end is 2cm lower than that of a standard Allez, and 1cm lower than the Tarmac, in addition to a seat tube angle that’s 0.75-degree steeper. Adding another element of performance potential is the aero seat tube and seatpost (same seatpost as the Venge Vias uses) that allow the Allez Sprint to match the original Venge design in the wind tunnel. Specialized matches the frame with the very same fork that comes on an S-Works Tarmac.

For the 2016 model year, the Allez Sprint X2 will only be available as a frameset in the US, while other markets will have complete models. So, for those of us in America, $1100 will get you a fork, seatpost, and sweet gold-color frame (the only color it’s available in at the moment).

If you’ve never had the pleasure of riding in the Santa Cruz area, it’s something you might want to put on your bucket list. With beautiful beaches to the West, rather large mountains to the East, and Redwood forests to the North, there is really no shortage of scenery to be enjoyed. Our day consisted of a 103-mile loop that included a leg-tingling 8,500 feet of climbing, and a heroic 30 mph tailwind down the coast to finish the ride. 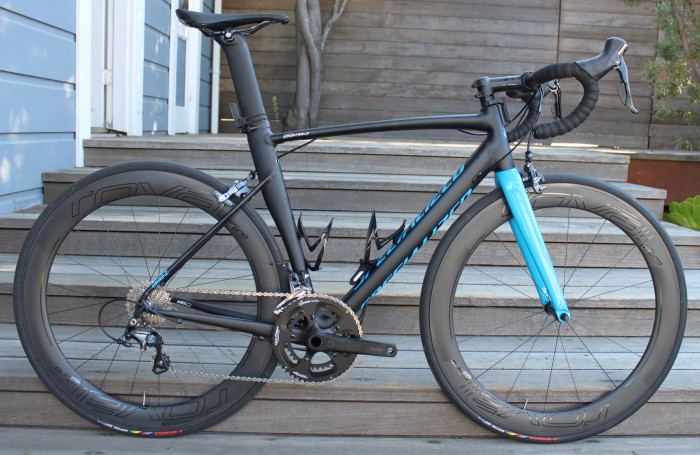 The Allez Sprint X2 as we rode it had a full Shimano Ultegra mechanical group with exception of Praxis Zayante aluminum cranks. Specialized threw Roval’s CLX 60 wheels on, although they won’t be spec’d on the bike in any market. Considering that the frame is claimed to be 1150 grams, just 250 grams more than the Tarmac, the complete bike was respectable in weight even with such a deep set of wheels.

Getting our fit dialed in was interesting considering the head tube is quite a bit shorter than what we’ve become accustomed to. As much as we would have loved the slammed stem criterium fit, the 100+ miles on tap made us go a little more conservative and run 20mm of spacers underneath. This actually worked out well because we were also trying out the Specialized Stix Sport headlight that used a mounting bracket that attached to a 10mm thick spacer, while the 70 lumen light could be easily removed from the mount for USB charging. The taillight has six flash modes and comes with a number of mounts to accommodate different seatpost designs. The Stix Sport combo costs $55.

Things such as comfort and handling typically don’t manifest themselves until hours into a ride, yet pedaling stiffness is one of those things that is on display as soon as you roll out of the driveway. As mentioned earlier, Specialized claims a 30-percent bottom bracket stiffness increase over the S-Works Allez, but how does that actually compare to a top-level carbon bike? According to in-house testing by Specialized, it actually matches the bottom bracket stiffness of an S-Works Tarmac, and comes up just short of the Venge Vias. Lab testing is one thing, but dynamic testing out on the road is something different altogether, so we went in as somewhat skeptics that a $1100 frameset could go toe-to-toe with something more than three-times its cost.

It would have been an interesting experiment if Specialized would have covered the tubes of the bike so we couldn’t see what we were riding and sent us out for the day. We’re pretty darn certain that no one in our group would have thought they were on anything but the best carbon bike considering how impressive its pedaling efficiency was. Granted, the Roval 60mm deep wheels don’t exactly do the frame a disservice in this department, but regardless, the Allez Sprint was something you could lay the power down with and get the feel that none of it was wasted in lateral flex. Going to the aero seat tube and seatpost doesn’t give it quite the same level of compliance as the standard Allez, but dropping the seatstay/seat tube junction lower was partly done to allow greater compliance at the saddle. It was by no means the most comfortable bike we’ve ridden on a ride of that length, yet wasn’t abusively rough either.

After over five hours of saddle time we had a pretty good sense of the Allez Sprint X2, and the only unfortunate thing with it is simply that getting a complete bike in the States immediately isn’t going to be possible. Specialized did tell us that complete 2017 models will be available in a matter of a few months, but pricing is not yet available. At $1100 for the frameset, it’s an outstanding value when considering it has a level of performance that puts it in league with high-end carbon. As Chuck Teixeira told us, “Having bikes that deliver all the performance benefits while being affordable is important”, and we think they nailed it.