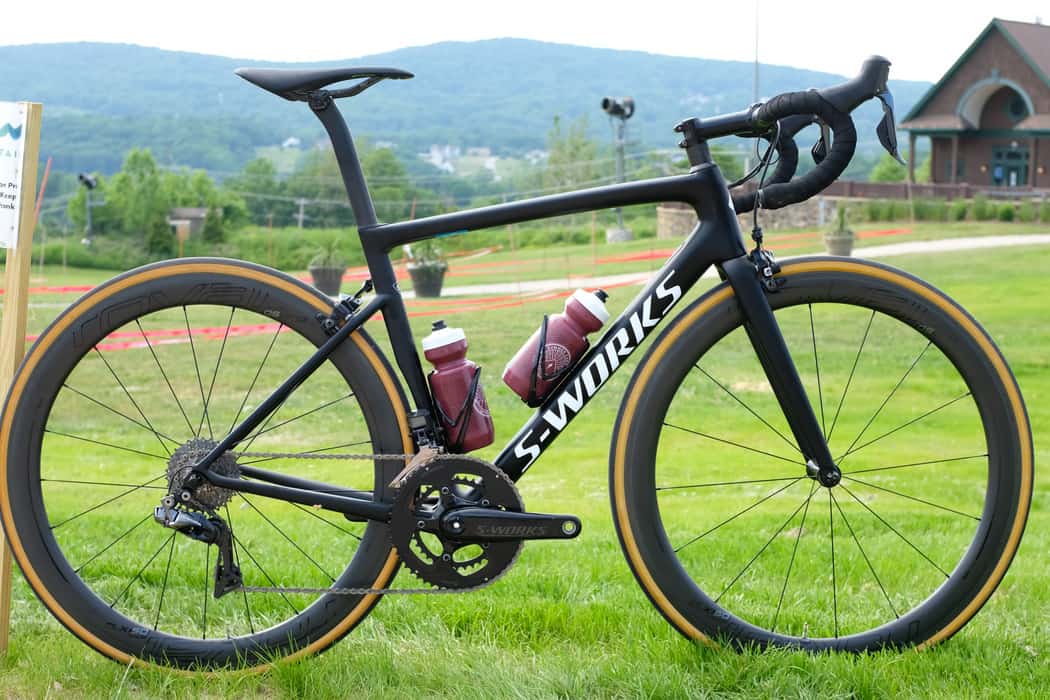 The 2018 Specialized Tarmac gets a new look that’s intended to improve both performance and comfort. When Specialized started looking to update the Tarmac they asked themselves a few simple question; will we be able to improve handling, make a lighter frame and make a faster bike all without compromise? Well, it turns out they believed they could and we would have to say they did with one of the most dramatic redesigns since the bike’s initial inception back in 2004.

The noticeable difference is the new drop stay rear triangle. The compact rear end with specifically shaped seat stays combined with the new D-shaped seatpost add a significant level of in saddle compliance. They also have decided to use three different fork leg sizes allowing them to fine tune the front end ride quality as the frame size changes. This was important now that the Tarmac will come in sizes 44-61 as a shared platform for both men and women.

Yes, the women specific Amira line is gone and the performance option is now Tarmac for everyone. There will be women targeted colorways that will also have different touch points (saddle, bar width and crank length) but share the same geometry that Specialized says is based on “rider first” engineering not “gender first”. From all their research plus the data captured during Retul fits they came to a conclusion that performance riders no matter the gender were looking for the same things out of their bike. This also allows them to produce a frameset that will hit a much larger range of men and women at the same time.

A big push for Specialized is their wind tunnel testing and this is the same for the Tarmac. Specialized claims that the new frame is 45 sec faster over 40k against bikes in the same weight category while also being 200 grams lighter on average to bikes in the same speed category. This means faster than other “climber” bikes but lighter than aero specific road bikes. All these aero benefits without affecting the Tarmac’s DNA qualities that have made it a top pick in the pro peloton. A size 56 frame is 733 grams but maybe even more impressive is that there is a stock complete bike that weighs in at an amazing 13.7 pounds.

The frame uses direct mount brakes and while the rear looks like it was originally designed to not have a seat stay bridge a carbon one has been added to help maintain rear braking power and modulation. There was very little info released on the disc brake version but there were a few on display. Don’t hold your breath though because it looks like it’s another eight to ten months before it will hit the market.

We spent three days riding the back roads of New Jersey, New York and even a little spin over the Delaware River into Pennsylvania. We racked up about 150 miles on the bike with one day alone just shy of 80 miles. The more time spent on the rolling hills with punchy inclines and descents we fell more and more in love. The bike responds instantly to hard efforts and is an absolute rocket ship when it comes to descending. The handling is light and effortless instantly responding to rider input but is still on a very stable platform that inspires you to push everything a bit further. We went into corners faster and couldn’t find gears big enough for the speeds we wanted to go downhill.

These were all things that we have almost come to expect from a Tarmac that has been reborn in the wind tunnel but there was one thing that caught us off guard. The level of comfort that has been added over its predecessor. Much of the comfort benefits are noticed while seated and gone is the traditional round seatpost replaced by the new seatpost design and shape. There is also a new layup for the entire frame that Specialized says is nearly twice as many precisely cut and positioned pieces. Not only is the layup more complex but it is size specific so each and every size is unique, allowing them to control the overall comfort and stiffness no matter the size.

For more info on the new Tarmac and to see all the build options head over to Specialized.com