When aero and compliance work in harmony 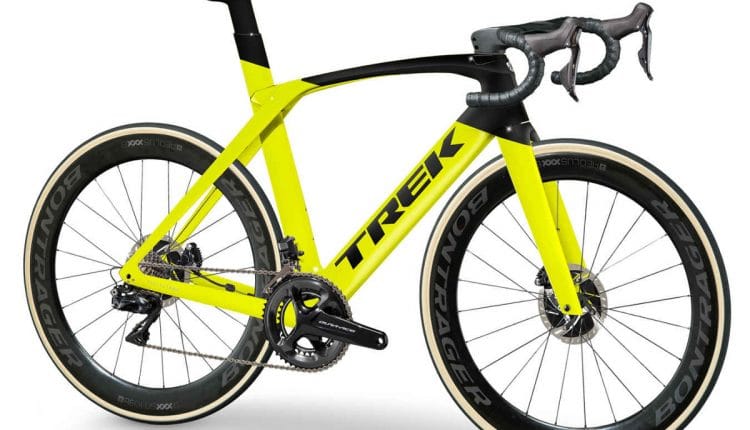 As they have done since the Lance days, Trek Bicycles used the Tour de France to roll-out a new Madone road bike. We received our Madone SLR 9 bike just a few days ago and had to wait until the embargo lifted today before we could say anything about it.

When we first pulled our new Madone SLR 9 out of the box, owing to its fancy paint scheme we figured that someone at Trek had mistakenly sent us a bike from their in-house Project One build/paint program. Although not everyone loved the color scheme, there was no denying that it was a work of art. The good news? The bike, with what’s called a Matte Dnister Black/Gloss Sunburst finish was actually a production color. Wow!

What makes the bike so unlike all the other aero bikes is its use of Trek’s proprietary IsoSpeed rear suspension (borrowed from the Domane and previously referred to as the Isospeed Decoupler). Although Trek will never use the word “suspension”, the design does provide an ambitious amount of rear end travel (or compliance) when the rider is seated.

FROM WHENCE IT BEGAN 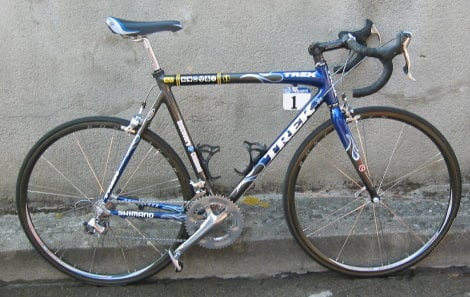 This was the Team Discovery Channel Madone ridden by Lance Armstrong with an original Project One flame paint scheme circa 2005. 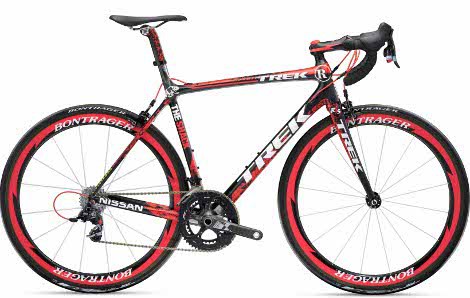 The Madone used by the Radio Shack squad. 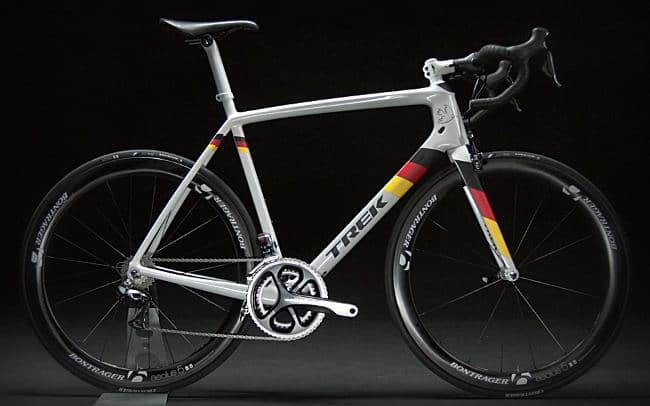 The is the Madone race bike ridden by Jens Voigt – it was the last of the hardtail versions. 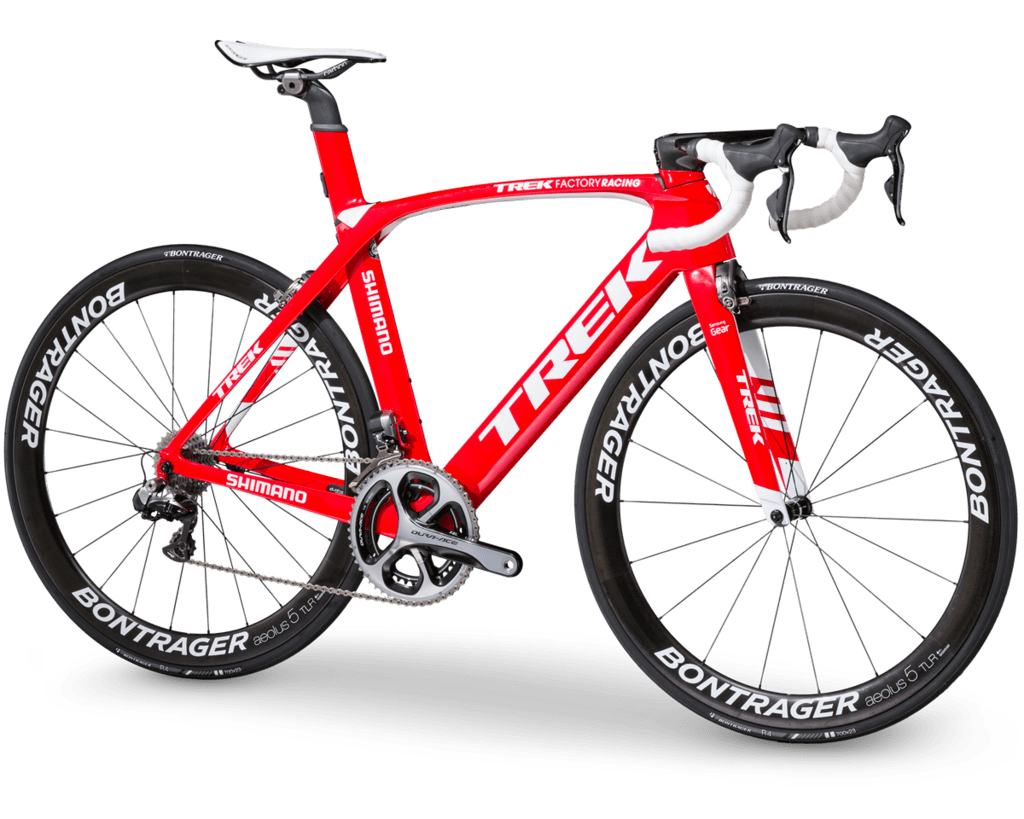 This was the first version of a Madone using the IsoSpeed suspension, but unlike the new version, the Isospeed was located at the seat tube cluster and was non-adjustable. 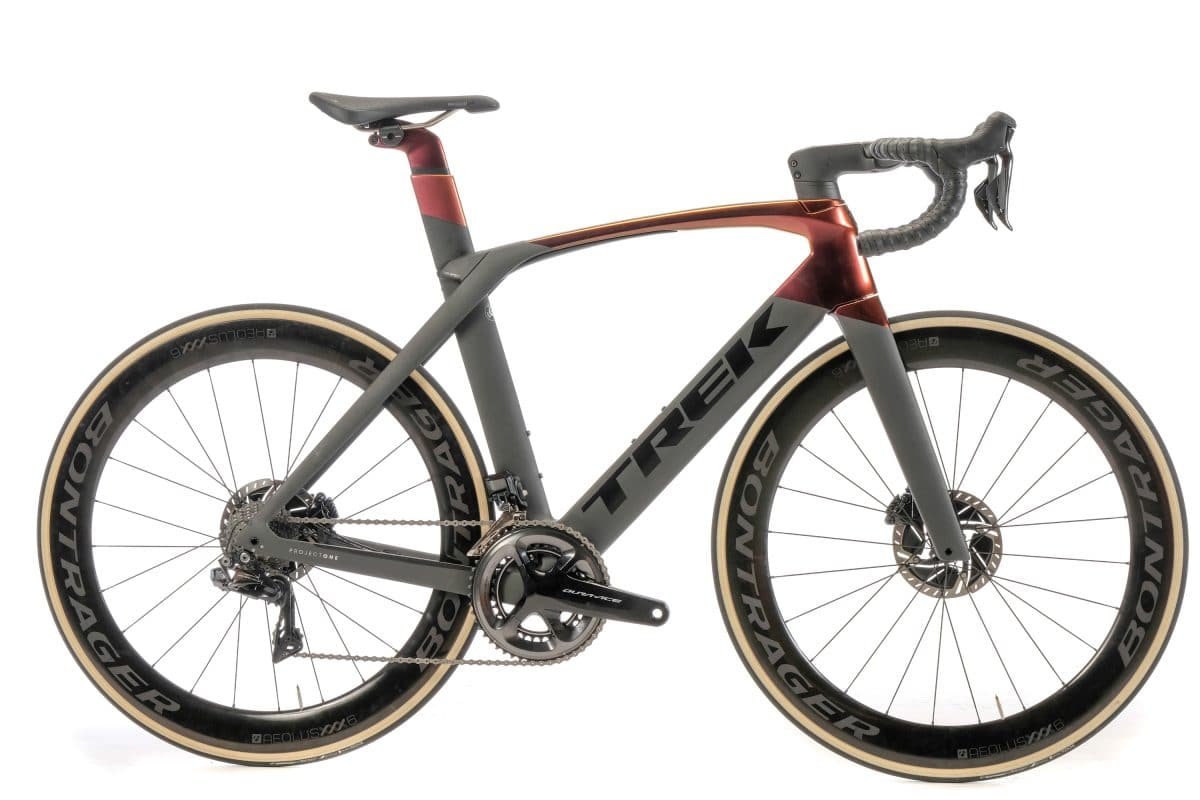 First developed for Lance Armstrong and the US Postal team some 15 years ago, in Trek’s three bike stable of performance road bikes (that includes the lightweight Emonda and the “full-suspension” Domane), the Madone represents Wisconsin’s unique answer to the aero road bike.

The new Madone revels with a collection of KammTail Virtual Foil shaped tubes and fork.    Trek is making the bike available in four different models with the price of the entry-level Madone SLR 6 starting at $5999. There is also a women’s version and a rim brake version (the SLR 8) which starts at $7499. The Madones are available in eight sizes and although originally made famous for their production at the Trek factory in Waterloo, Wisconsin, the OCLV Carbon frames are now made in Asia.

What has taken the place of all the old carbon manufacturing floor space is basically a giant paint shop where the Project One bikes are finished. The color options out of Project One are nearly endless and although they are a definite up-charge they provide first-rate paint to create your own personal look. Our bike was finished off with a Project One paint scheme (a $500 upcharge) which is basically a P1 stock finish that doesn’t require a special order – or additional $1000. 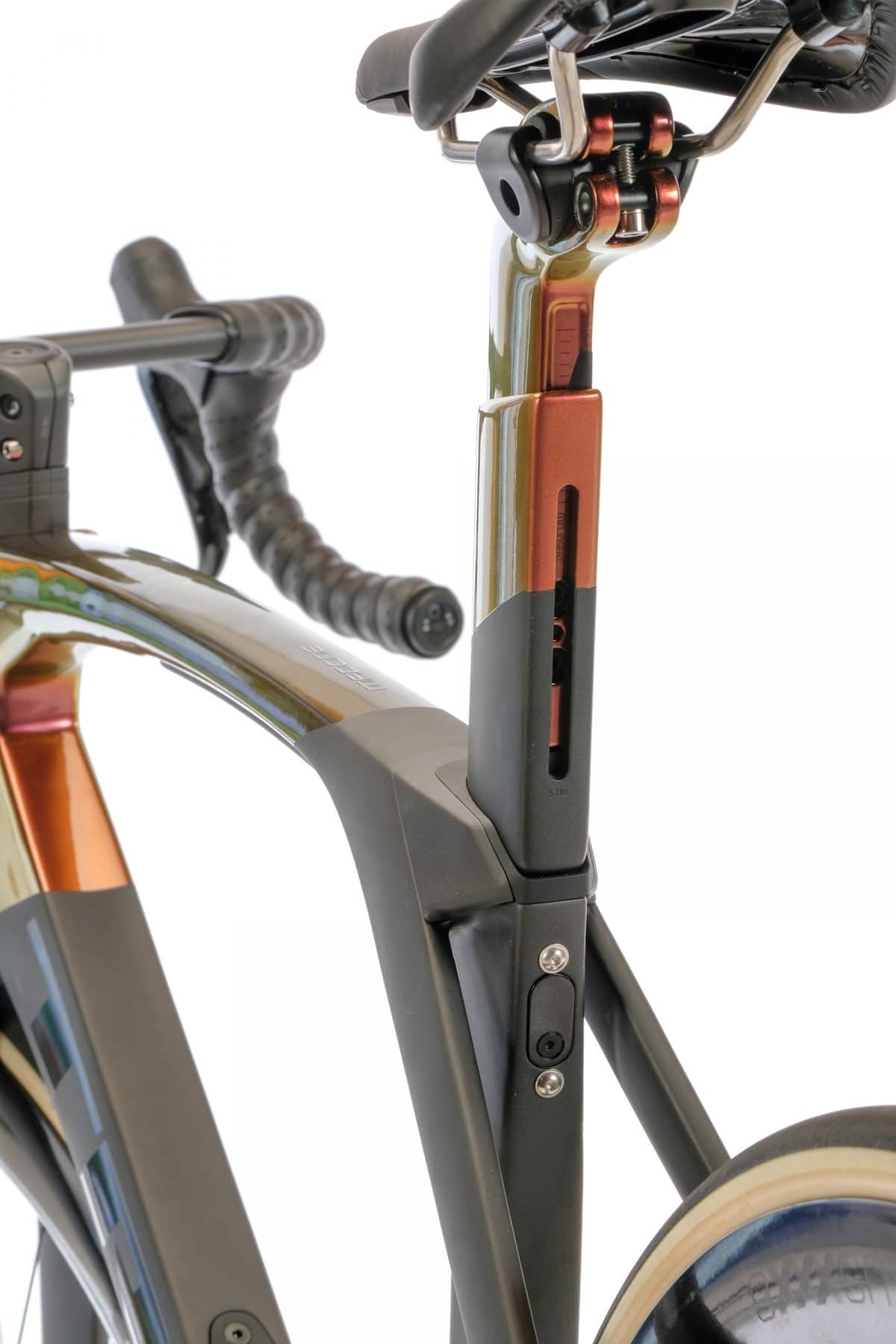 There is no shortage of hardware on the Madone, including that used for the new seatpost, the rear Flare light mount and the adjustment for the adjustable top tube Isospeed. Although the Isopseed is adjustable, the only time we ran it the “locked-out” mode was when we wanted to compare the ride quality to when it was on “open”. The Isospeed is what makes the Domane (with front and rear Isospeed) one of our favorite and most comfortable bikes to ride. The Madone falls in suit although on initial rides it didn’t feel as compliant in the rear as the Domane which could be the result of the new damping unit. 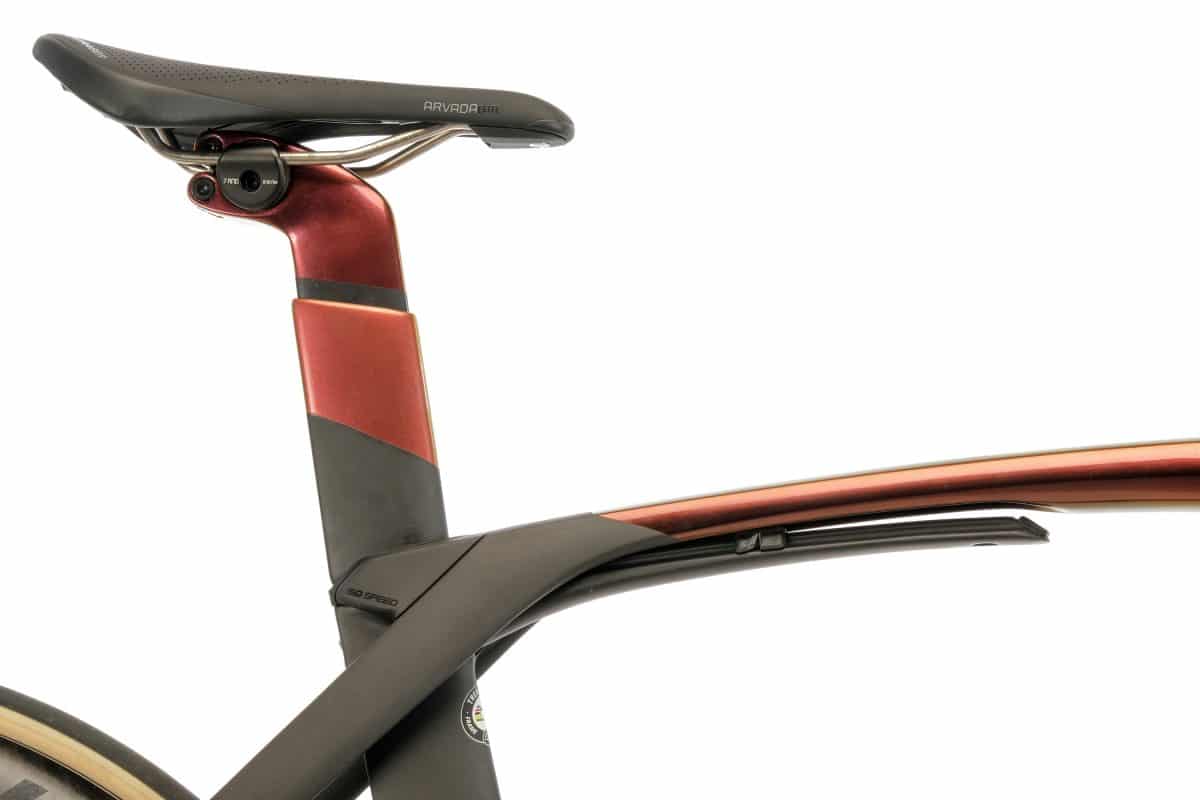 This is what the Isospeed system looks like when it is unbolted from the top tube. From the seat cluster to the stem, there are some small caps and covers that give the bike a bit of a jigsaw puzzle feel. With a 98.1cm wheelbase, the bike cornered well with the Isospeed providing added traction that allows the rider to stay seated and pedaling. 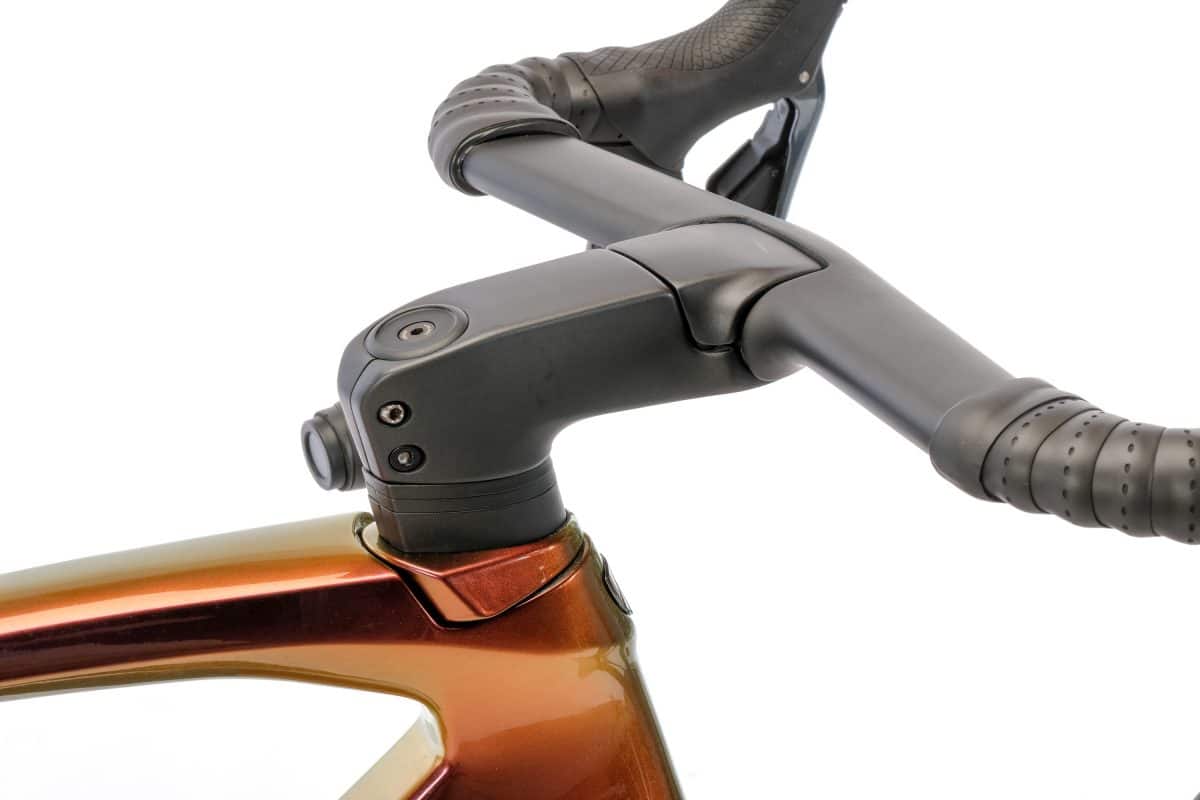 As has become all the rage this year, the Madone too runs all the cable internally through the stem, but luckily they don’t spec a fixed, one-piece bar stem combo. The carbon aero bar has a slight rear sweep to it which minimizes discomfort due to the sharp edges. 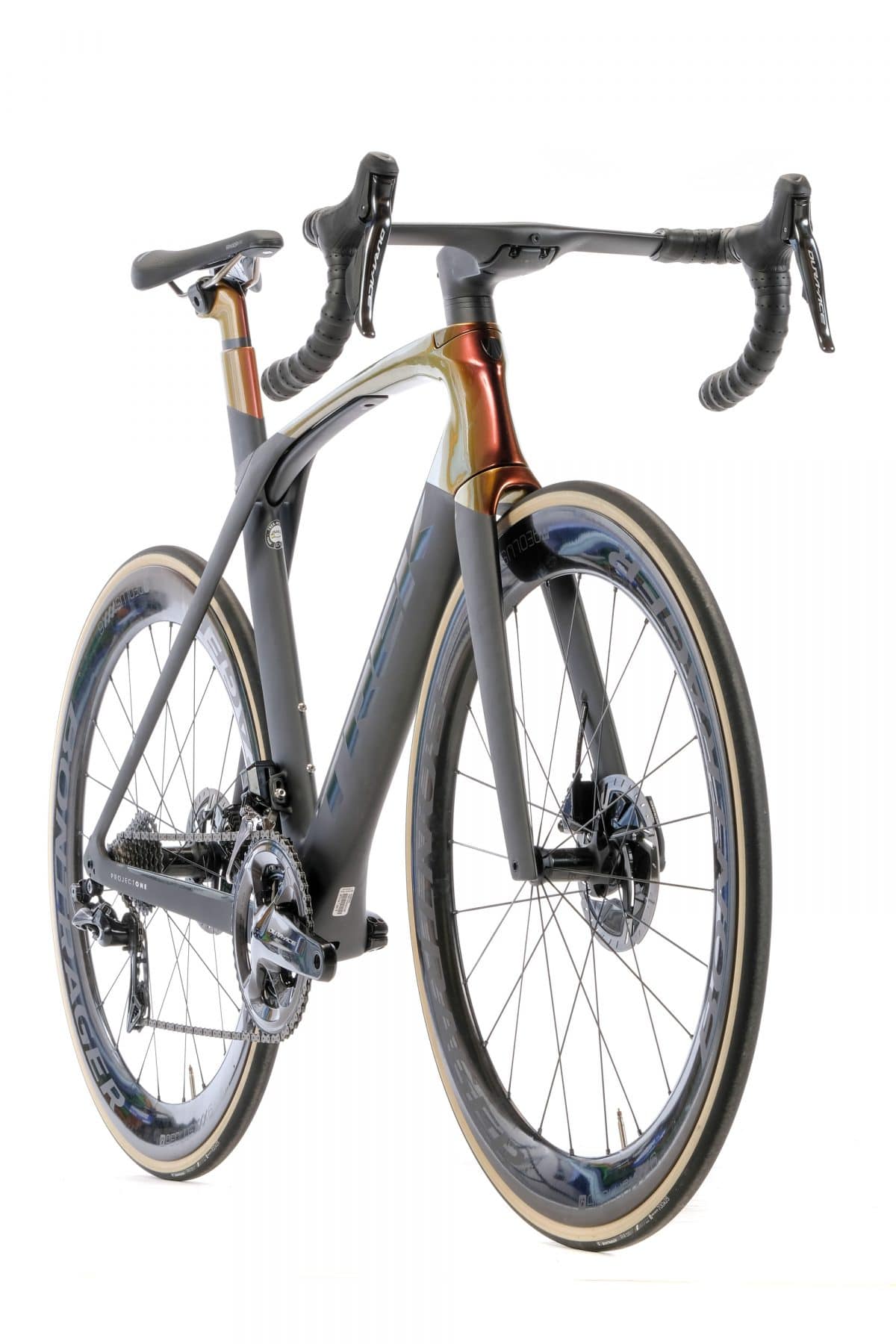