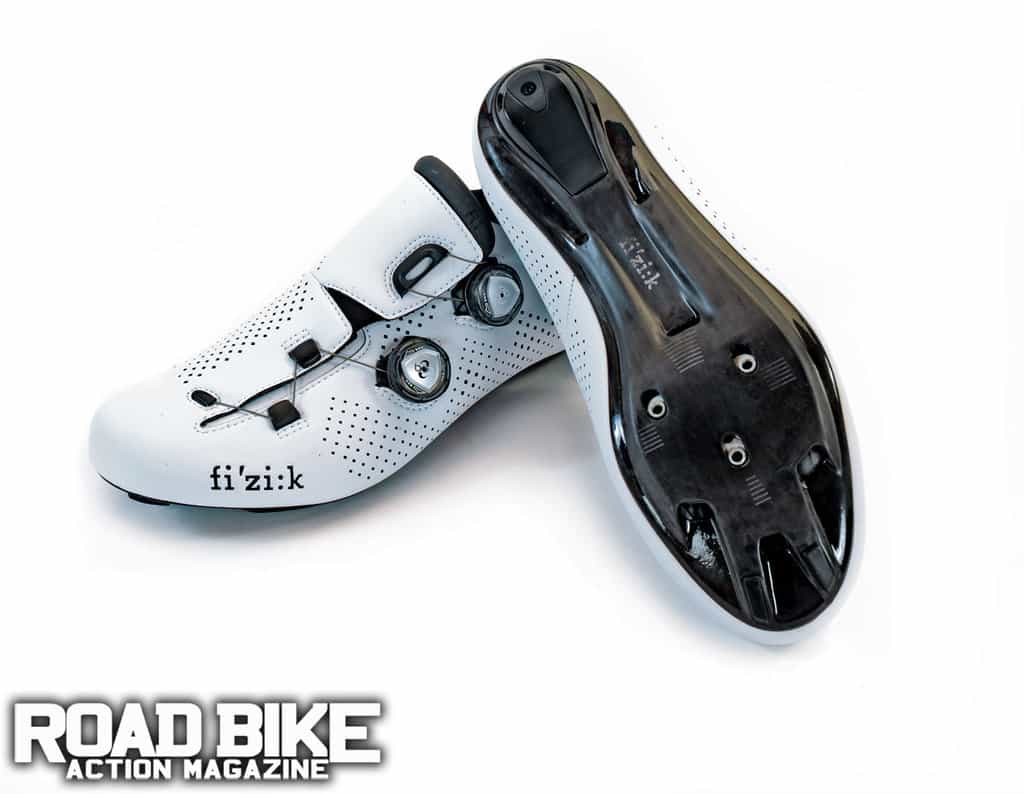 Ever since they began saddle production over a decade ago, Fizik has always set about to provide uniquely designed products. Since the time they made the move from being a saddle-specific company to one that included shoes (and now stems, seatposts and bib-shorts), they have progressed mightily from their original designs. However, the shoes have always stood out with particular tenets that have helped set them apart from the vast school of competitors.

The Fizik is unlike the majority of shoes on the market in that it follows more of a tongue-less, clamshell design that envelopes the foot. While odd at first glance, we quickly got used to the idea. The Fizik uses a perforated MicroTex upper mated to a full, unidirectional and ventilated carbon outsole.

As they have become increasingly popular for their efficient ease of use, Fizik chose to rely on two Boa IP1-B closures. The front dial has a single wire attached, while the rear Boa has the more familiar loop wire. The Fizik R1 B is available in either white or black and sizes 40–48.

The first thing we noticed about the Fizik was how stiff the MicroTex upper is. It’s nowhere near as pliable as either a good old-fashioned leather upper or other shoes that use a thinner amount of material. While it took a while to get the shoes to feel broken in, the upside to this was that the shoes came across as extremely durable.

Without a doubt, a key feature to the Fizik shoes are how efficient the Boa dials are for providing a secure, snug fit. Although the Boa closures can take a bow here, instrumental in the fit is where the Boa dials are placed, and Fizik obviously nailed it. We’ve seen other shoes with Boa dials that, due to their placement, never provided as well of a balanced fit.

The Boas are definitely capable of snugging the shoe tightly to your foot. We also liked the soft-rubber, trimmed edge that prevented the shoe from digging into the top of the foot. Equally so, making mid-ride adjustments for a tighter or looser fit are super easy. Even with the stiff upper and full-enclosed clamshell design, one pop of the Boa dials and the Fizik springs open to easily release your foot.

The R1B Uomo is the top line of a three-shoe lineup that decreases in price by $100 for each level. At $400, they aren’t cheap, but they are still about $100 shy of the most expensive competitors on the market. When it came to the shoes’ styling, the jury was mixed; some thought the clean, modernist look had a certain appeal, while others were left wanting of some type of graphic design or added color.

The R1B Uomo is definitely a performance-oriented shoe. From the stiff carbon sole to the stiff upper that can be cranked down on the foot to ensure zero slippage in a hard sprint, it’s meant to be ridden hard.