Road race historians might recall the GT/Lotto deal as one of the more entertaining when, within a matter of weeks in 1999, one of the biggest names in BMX and mountain bike racing found an open slot in the Tour de France. Who would’ve ever imagined that a small BMX brand born in a Santa Ana, California, garage in 1979 would someday be the bike to win one of the most celebrated of Spring Classic races, as well as eventually being crowned the UCI World Cup champion? Stranger things may indeed have occurred in the cycling world in its 100-plus years of existence, but how GT Bicycles earned an invite into the Tour de France took some doing.

IN THE BEGINNING
In truth, GT’s road effort had actually begun some six years prior. But, in the spring of ’99, things were moving quickly, and thanks to a combination of some good luck and timing, as well as some well-placed informants, plus a whole lot of cash and sweat equity, the SoCal brand most famous for their BMX and mountain bike laurels made it into the Tour de France.

After bike and contractual problems left the Lotto/Mobistar team looking for a new bike sponsor, the resurgent GT (after being bought by Schwinn) was on a promotional tear, and with barely enough time for the ink to dry on a mid-season contract, they were able to step in to supply the team with a batch of 40 aluminum triple-triangle frames (with custom geometry) for the Tour de France in just 20 days. By season’s end, they had not only won the Tour de France invite they so highly coveted, but, more surprisingly, they ended up with a World Cup title, thanks to the efforts of the quintessential Russian hardman Andre Tchmil (above).

Despite their entry into the Tour being their biggest road splash, as GT’s former sports marketing director Doug Martin recalled, “GT actually had close to eight years of heavy involvement in the road scene before the Lotto deal happened. As big as we were in mountain biking at the time, we knew the Atlanta Olympics were happening, and we decided to partner with USA Cycling to sponsor what was basically an in-house trade team. The roster was stacked with talented riders like George Hincapie, Freddy Rodriguez and Chan McCrae, and it really gave GT some instant road credibility to have them racing the bikes. In the coming years we were also the bike sponsor for the Shaklee, Montgomery Bell and Saturn teams.” 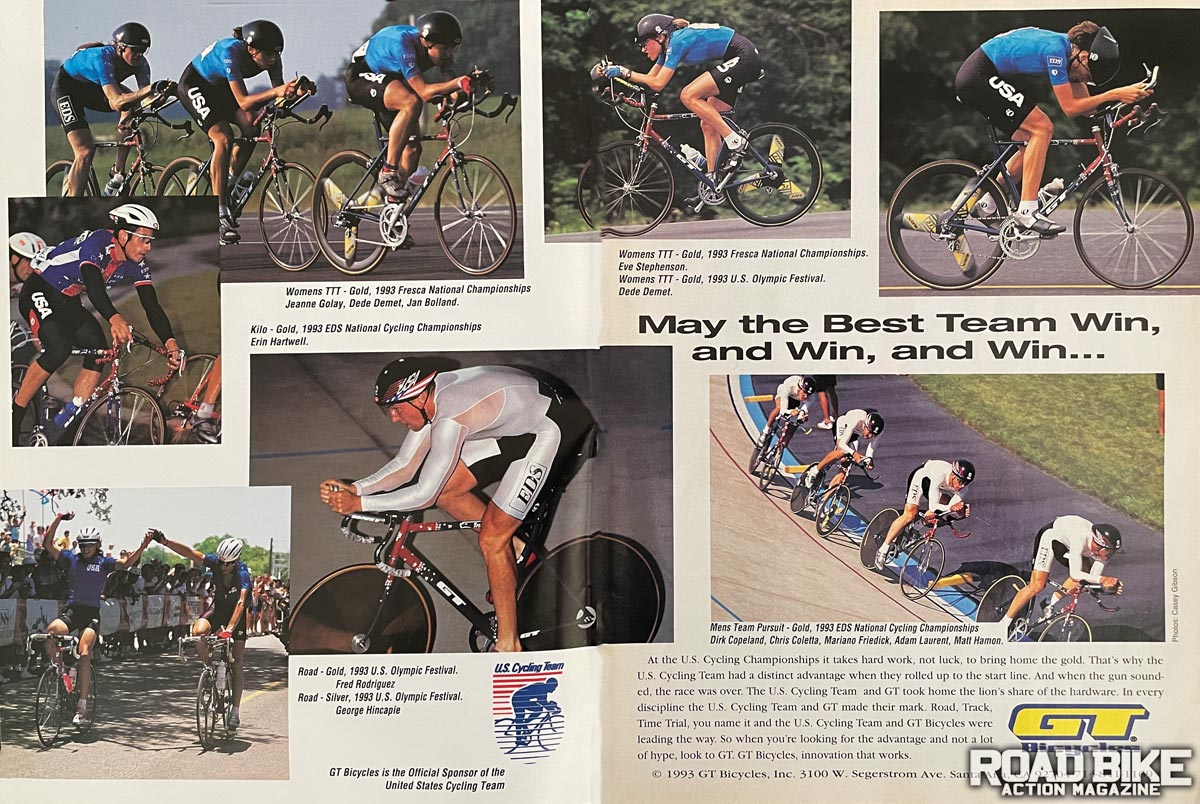 AS FOR THE BIKES
Although the majority of GT’s production bikes were produced in Asia, GT had always been dedicated to homegrown frame production. After all, it was in a small Santa Ana, California, garage where the company got its start with Gary Turner building BMX frames for his son—but that was then. Not only did GT have a 400,000-square-foot building that was home to upwards of dozens of welders, but they also had a frame-building annex in Longmont, Colorado, that was in charge of all the special project frames. Kevin Nelson was one of the engineers in the loop.

“Most of the frames were 6061 Easton. We made a few custom scandium tube sets, but only for a few guys at the 2000 Tour. The first run of frames we had to build was 40 custom frames in 20 days. This quantity was based on having two frames for each guy, and they had to arrive a week before the Tour. Building that many frames and leaving room for heat-treat and paint meant that a group of us spent many longs days cutting, assembling and tacking. Once we got those welded, I took everything up to heat-treat and was there for all the alignments.

“The riders were happy because their bikes fit, and Andre Tchmil won the World Cup title that year. Lotto signed a contract for the next two years.”

“Once the decals and paint were done, we boxed them up, and I got on a plane with the four huge boxes. Jean Luc Vandenbroucke was the director sportif for Lotto at the time, and I remember him jumping out of his office window (first story) to greet us when we arrived! His brother (Frank Vandenbroucke’s father), Jean Jacque, built all the frames in time for the Tour start the following week. The whole experience was really great, and everyone in the company really came together to make it happen. Andrew Herrick bought us a new ping-pong table as a reward, so we didn’t have to play on the conference table anymore, and it sat untouched until we had completed the frames on time.

“Everything went very smoothly for the Tour. The riders were happy because their bikes fit, and Tchmil won the World Cup that year. Lotto signed a contract for the next two years. The following years we built special bikes for Tchmil with narrower top tubes and special Paris-Roubaix bikes with longer chainstays and more tire clearance for the mud. The geometry for each bike had stock chainstay length and BB drop, but the head tube length (to the millimeter for each guy), top tube length and seat angles were all made to measure. Most of the frames weren’t too unusual, except for a few guys with really long head tubes and Jacky Durand’s 71.8-degree seat angle.

“The only frame to come back during the three seasons was Fabian DeWaele’s. Apparently, a dog ran into the peloton, and he ended up running into something!”