"He's a doper, with a doping history." 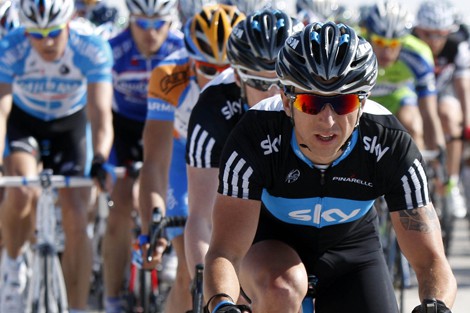 Former Team Sky head coach Shane Sutton has been called “a doper” and a “serial liar” by the lawyer of the team’s former doctor Richard Freeman at a medical tribunal in Manchester. Sutton, who resigned as British Cycling’s technical director in 2016 after enjoying success with their track team, has been named as the person Freeman ordered testosterone for in 2011.

“Our case about Mr Sutton is that he’s a habitual and serial liar,” said Freeman’s lawyer Mary O’Rourke.

“He’s a doper, with a doping history.”

Sutton, who was accused of discriminatory language while he was at British Cycling but cleared of all but one of the nine accusations, denies he “bullied” Freeman into ordering 30 Testogel sachets to treat his erectile dysfunction.

He is due to give evidence later on Tuesday.

Freeman, who was British Cycling and Team Sky’s doctor from 2009 till he resigned in 2017, is facing a charge of medical misconduct from the General Medical Council.

They allege he ordered the Testogel sachets for the National Cycling Center in May 2011 knowing or believing it was intended for an athlete to enhance performance and then lying to cover up the order.

The GMC’s case is that the testosterone was used for “micro-dosing” as a way of improving an athlete’s performance.

Their lawyer Simon Jackson has said that 62-year-old Sutton is being used as a scapegoat by Freeman.

Earlier on Tuesday, the tribunal ruled the general topic of erectile dysfunction could be the subject of questions to Sutton in public.

Any other questions about his medical history must be asked in private. The GMC had applied for all of Sutton’s health matters to be heard in private session, saying his anonymity had been “stripped away” by O’Rourke.

The tribunal said Jackson had already brought up erectile dysfunction in public session and the usual process to secure anonymity for Sutton was “always bound here to be more illusionary than real” because of the Australian’s public profile.