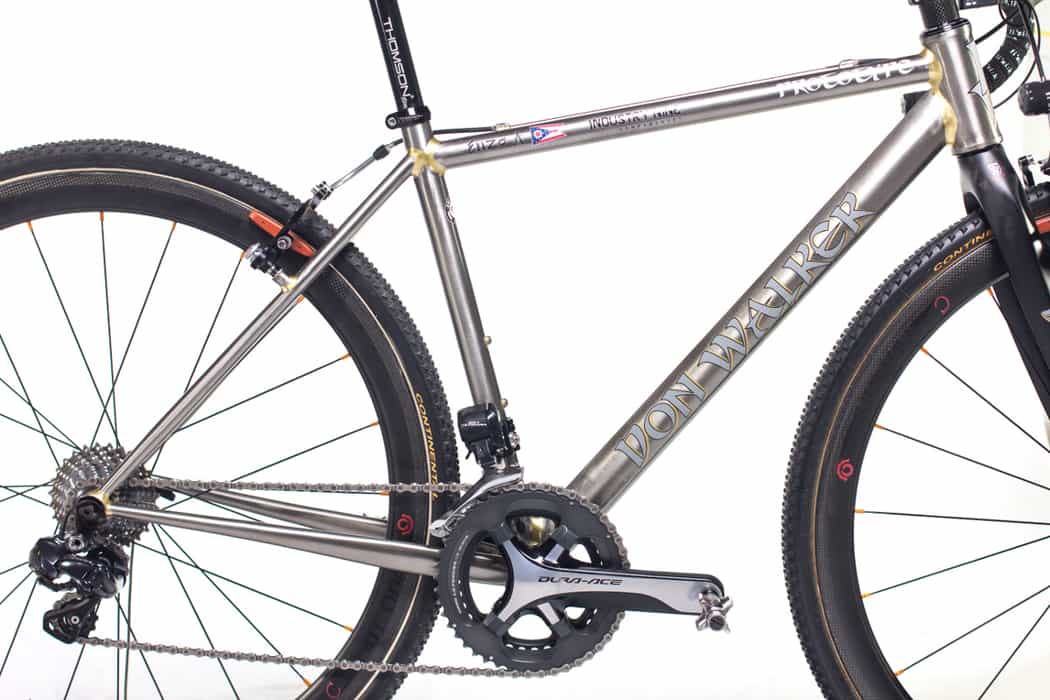 Well, here we are, not only in the heat of  the 2015 cyclocross season, but also the run-up to the 2016 North American Handmade Bicycle Show. As we get closer to the NAHBS in February, we plan to throw some light on various builders who make up this jewel of a bike show. In doing so, we figured why not start with the man himself, Don Walker, who besides being a frame builder for years, is also the man responsible for creating NAHBS. In addition to road bikes, Don has built some serious street cred for his track and cyclocross bikes and recently he had sent us some photos of his latest cyclocross “mutt” bike which we wanted to know more about. As luck, and life, would have it, we caught up with Don just as he pulled into a local Taco Bell in his hometown of Louisville, KY to order two spicy tostada, a bean burrito (w/ chipoltle sauce) and an ice tea chaser.

THE MUTT IS BORN RBA: So tell us about the “Mutt” bike?
Don: It’s a bike I build for one of the Junior class kids I sponsor, Enzo Allwein. I wanted to do something different, but I knew that for Enzo I wanted a bike that was light and fast. I spent some days searching through all my racks of tubes to come up with a selection that would also provide good stiffness.

RBA: What was the selection you ended up using?
Don: Well, it’s a big mix of different tubes which is why we call it the “Mutt” bike. I started with some Columbus Life seatstays, a Reynolds 725 top tube, Dedaccai chainstays, a butted Nova seatstay, and a really trick True Temper S3 aero downtube that I had sitting around the shop for about eight years. RBA: How long did it take to complete the project?
Don: I didn’t have much time before the next race came up so it was little bit rushed when it came to the finish. I think it took about 3 days to build the frame and then another 36 hours to apply the clear coat.

RBA: What parts did you use to complete the project?
Don: It has a Shimano DuraAce crank with a Shimano Di2 Ultegra drivetrain and a Shimano Pro cockpit. The seatpost is from Thomson, it has a Ritchey fork and Paul’s Components Mini Moto brakes which are the best around as far as I can tell. I used a Ritchey fork on his bike and he runs Crank Bros. Egg Beater pedals. The complete bike weighs just over 17 lbs.  and a similar frame and fork combo would sell for about $2600. RBA: Can you give us a preview of the NAHBS show?
Don: Oh it’s gonna be big. Sacramento is the first repeat venue we’ve used and for good reason – the last time we were there we had the biggest attendance figures ever. For the upcoming show we already have more space reserved with more builders signed-up. We also have a larger than usual amount of foreign builders heading over which is really cool. The goal for the show remains the same…we want to provide a place where cyclists can meet the builders and the builders can take orders – we want to keep them busy making frames!