After seeing Neilson Powless almost win a stage (and take the yellow jersey) on stage 5 and then today watching Quinn Simmons hang with race leader Wout Van Aert for miles in a break-away, American cycling fans have no doubt enjoyed the last two days of the 2022 Tour de France.

Looking back, it had been almost 30 years since a Junior American racer (Jeff Evanshine) won the coveted rainbow jersey when American Quinn Simmons repeated the feat in Harrogate, England in 2019.  Alas, for a variety of reasons, Quinn’s move to the big leagues didn’t go so smoothly.

THE UPS & DOWNS, BUT TOUR BOUND

Between  the arrival of Covid putting off his Euro debut and then Quinn’s own social media mishap that put him in the penalty box with bike sponsor Trek,  his  rise to the Tour de France has been an up and down effort. But, the Durango, Colorado native has kept at it and was eventually chosen to make the Tour team to become the  race’s youngest rider at 21 years old.

As for what lies ahead for Quinn in the next two weeks, his mom Holly said this morning via a video link with Bob Roll and Phil Liggett that , “We do have some secrets!”

The following is an interview I did with Quinn’s dad Scott just after Quinn took the World Championship title.

Talk about having a good year. Or, to be more specific, having a good couple of years. And that’s just how 18-year-old Quinn Simmons can describe his 2018 and 2019 seasons. In fact, let’s be more accurate and say they were really good seasons.

In 2018 it was three national titles (one road, two mountain bike), while this year included a TT national title and a win at the junior edition of Ghent-Wevelgem, a much talked-about effort at the Leadville Classic mountain bike race (where he rode back from two flats to almost win), and then, of course, the crowning achievement—the 2019 Junior World Championship title in the road race (and fourth in the TT). 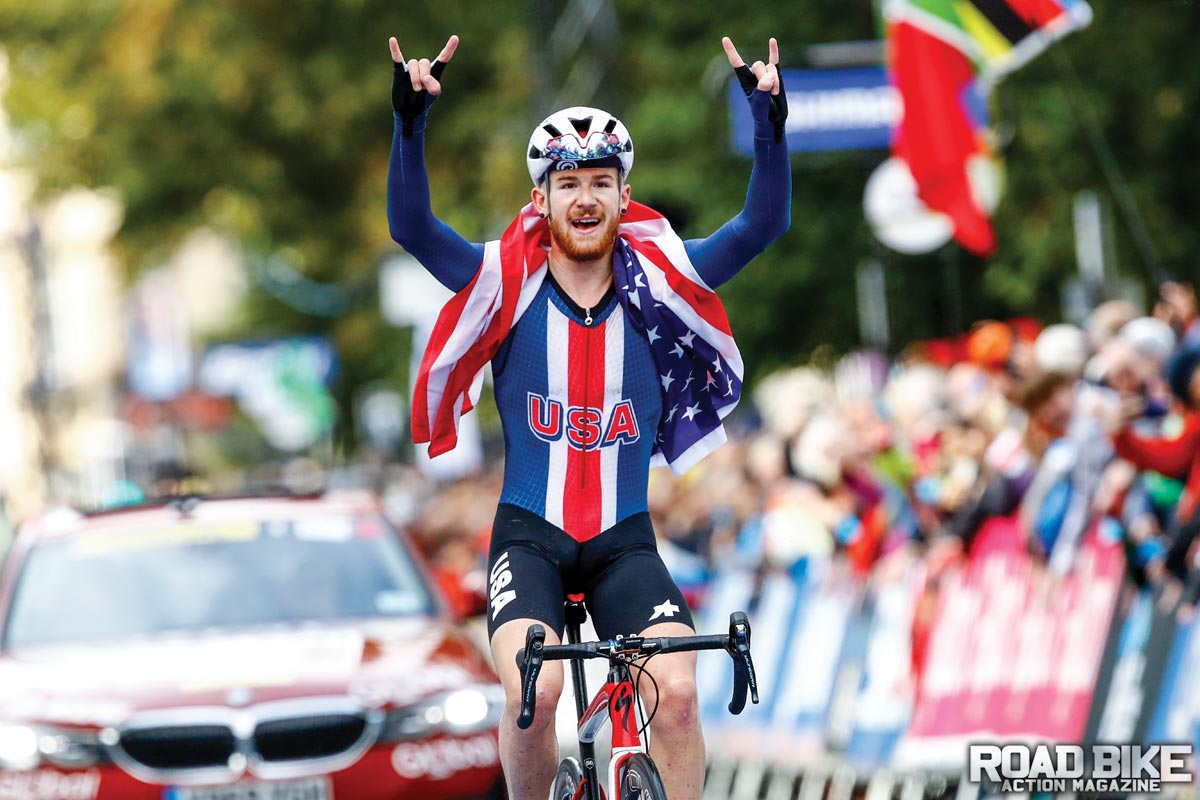 THE FAMILY THAT RIDES TOGETHER

It was owing to the consistency of hearing about Quinn all year long that we decided to try and find out more about him, only not from him. Knowing that any 18-year-old racer would have to be as much a team member as a member of his own family, we reached out to his dad Scott to get the inside skinny on both Quinn and his up-and-coming younger brother Colby.

“Early on I spoke to lots of cycling people regarding Quinn making it a career, and most everyone said he has so much talent that I would be foolish not to encourage cycling as a career.”

Scott Simmons and his wife Holly run a family construction business, and both ride bikes. In fact, word on the street in Durango is that Scott is one of the more feared riders at the local Tuesday Night Worlds. We caught up with Scott just after he’d arrived back home from Yorkshire, England, where the family had gone to cheer Quinn on to victory and a coveted rainbow jersey.

I began mountain biking in college and moved to Durango from Maryland. I raced on the first Fort Lewis College team. Work got in the way and have just dabbled in racing since. I ride now just to stay relevant with the kids so I don’t stink it up too much when they do let me ride with them. We did train together quite a bit before the kids got too fast for me. I will always have great memories of that. 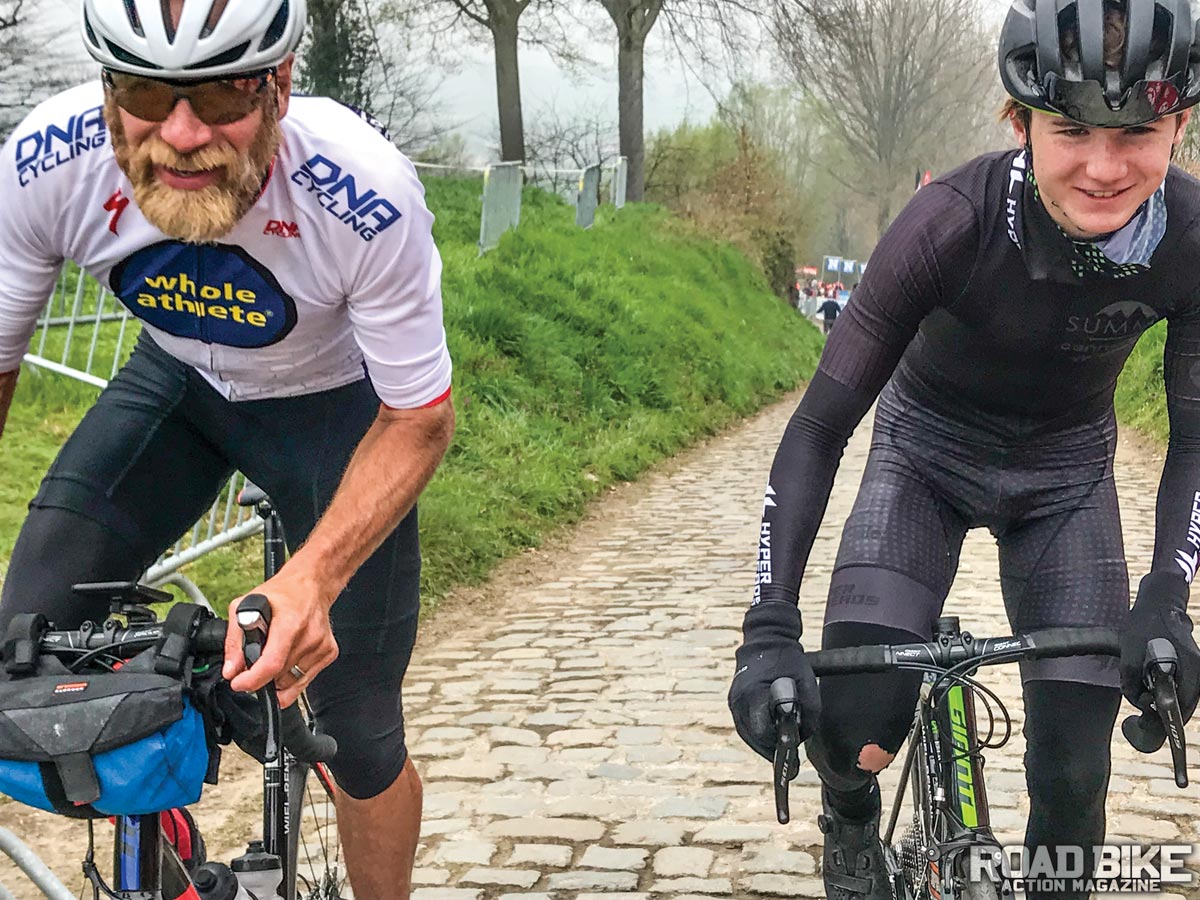 How old were Colby and Quinn when they started riding/racing?

Both boys raced little kids’ races from the time they were 5 or 6, but they didn’t really like it. Early on we forced them to ride just so Holly and I could get a ride in. There was usually a bribe of something sweet as a reward. They also both played hockey until Quinn was about 12 when we took him out of hockey. That year Holly forced him to join the Devo mountain bike team. He wanted nothing to do with it. However, his team went to the Arizona State Championship, and Quinn ended up winning.

As soon as he got back home, he said he wanted to race the state championships in Colorado, New Mexico and Utah, too. He started looking online for more races to go to and has been all in since. Colby raced reluctantly for a couple of years as we traveled to race with Quinn. Then last year, at 14 years old, he caught the bug and began to focus on training and racing.

At what point did they begin to think about being pro racers?

When Quinn was 15 and still strictly a mountain biker, he declared he was going to the Olympics. He used a road bike for training, but only did the one local road race. When he was 16, he told us that riding was his job whenever we suggested he come to the job site or look for a job. So, he has definitely been thinking [about turning] pro at least since 16. Colby has shown more interest this year in being a pro. This is his first road season, and he really likes mixing it up on the road. Ironically, neither of them really ride their mountain bikes anymore.

How have you and your wife managed that evolution?

That is a great question that has been tough, especially for Holly. She was very set on Quinn going to college, while I was okay with him not going to college and trying the pro route, mainly because he is talented and intelligent at many things. So, if the racing didn’t work out, he would succeed at something else. It has been hard on both of us with all the road miles they both ride, worrying about accidents with cars or just wrecks.

Early on I spoke to lots of cycling people regarding Quinn making it a career, and most everyone said he has so much talent that I would be foolish not to encourage cycling as a career. Colby as a young guy bounced between many sports, so at first we were a little reluctant to embrace his biking, but after a while when we saw his dedication, we have supported his desire to follow in Quinn’s footsteps. Quinn did online high school in order to free
up time to ride and race, and now Colby is also doing high school online.

Were you surprised that Quinn is a world champion?

Not at all. To me, the bigger surprise would have been if he didn’t win it. He has always hated losing, be it at the board game UNO when he was 5 or at hockey at 8. Losing has never sat well with Quinn. 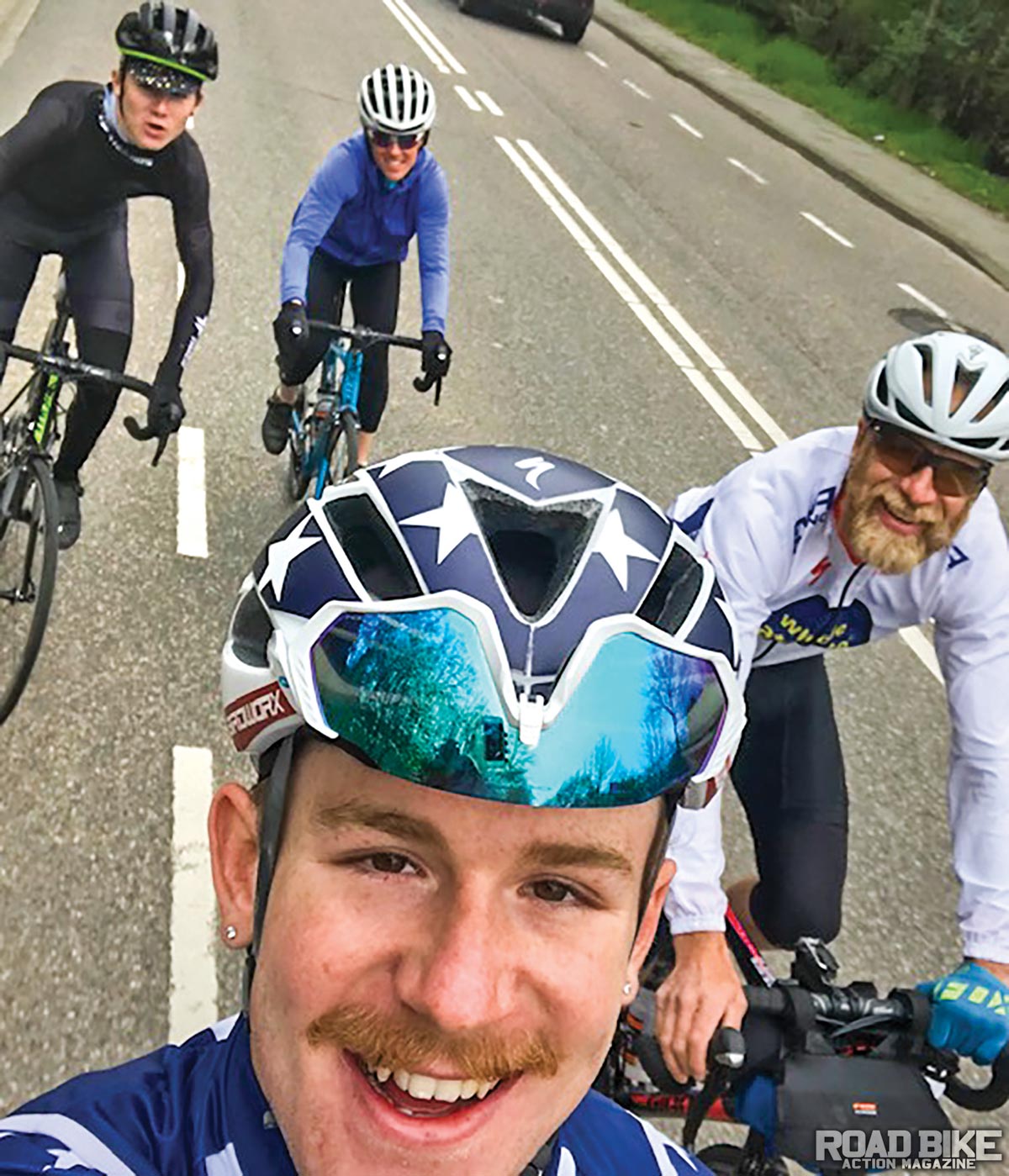 How do you differentiate Quinn and Colby as riders?

Until recently Colby seemed more suited to be a climber, but as he has grown, it appears that he is developing into a strong power rider, much like Quinn. One thing that sets Quinn apart is his race IQ, which Colby is still learning that aspect of racing.

Is there much bike talk at the dinner table?

Holly should answer this one! Is there anything but bike talk? I often have to say, “Okay, let’s talk about something other than bikes!” Most often, however, it remains all bikes—who is doing what locally, who’s doing what in the pro peloton, etc. The worst is after we have ridden together on a group ride, then it becomes a litany of questions—who let the gap go, who was skipping pulls and who got dropped. On occasion it used to get pretty heated, and Holly would end up leaving the table. There’s not much arguing now, because Quinn has usually beaten us all up pretty badly. 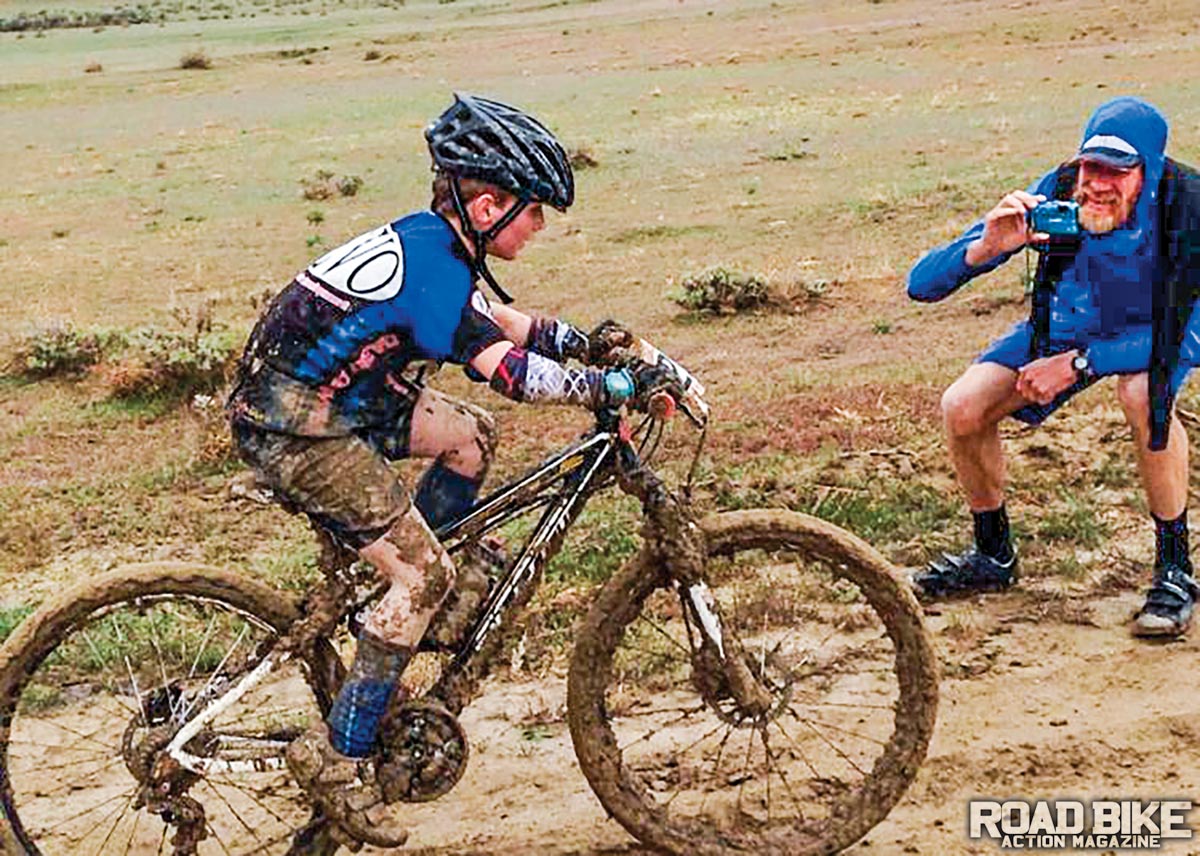 Is it true that skiing is part of the family’s secret training?

Actually, as much as I like cycling, the sport I’m into the most is ski mountaineering, which involves skiing up mountains in the backcountry using skins on the bottom of your skis and then skiing back down. Even when Quinn was a baby I would carry him in a backpack to some of the mellower places I ski. I’d carry him up and then ski down. Not long after he got too big to carry, so I would take him out with just his little resort skis and pull him behind me.

By the time I started pulling Colby up the hill, Quinn was off ahead of us. Although Colby was good at the sport, he didn’t show much interest in it. However, at an early age they had both skinned to the top of some of the major peaks in the area on their own.

“There’s not much arguing now, because Quinn has usually beaten us all up pretty badly.”

I ski mountaineer raced at the time and thought it we be fun to do it with the kids. Only Quinn would go for it. We went to several races, and he did really well as a 13-year-old, placing in the top half of the men’s division. So, we decided to try to race at the World Championships in 2017. Quinn was in serious mountain bike training at that time, but his coach agreed that he could ski twice a week leading up to the race.  So, we trained hard on those days, and he’d get to race at the worlds. Quinn raced three races there and narrowly missed winning the World Championships in the sprint race. Next, he won the qualifying heats, and then led in the finals until the last few seconds to win the bronze. The Europeans couldn’t believe it.

Is there any indication yet about what Quinn’s schedule will be in 2020?

It’s still to be determined, but one of the deciding factors for Quinn choosing to go with Trek-Segafredo is that he would have a solid race schedule, including some of the Spring Classics. The Classics are the races he wants to focus on primarily. There will also be a chance for him to race some of the big American gravel races, road nationals and maybe taking another crack at Leadville.