Chris Froome said on Saturday it was an “honour” to be mentioned in the same breath as five-time Tour de France winners Eddy Merckx and Miguel Indurain.

The 32-year-old Briton all but wrapped up a fourth title in 22.5km time-trial in Marseille, putting himself alone in fifth on the list of most successful Tour riders of all time. When he rides into Paris he will know that only Belgian great Merckx, Frenchmen Jacques Anquetil and Bernard Hinault, and Spanish freight train Indurain have won the Tour more times than him.

“Obviously it’s a huge honour just to be mentioned in the same sentence as greats of the Tour de France history like that, but certainly I’m just taking it one race at a time,” said the Sky team leader. “I have to get to Paris tomorrow safely with the rest of the guys. I’m just taking it one season at a time. “But certainly, I’ve got a new-found appreciation for just how difficult it is for those guys to win five Tours de France. “It’s certainly not getting easier. This one was the closest of my Tour de France career.”

It wasn’t just the closest — his 54-second winning margin to Rigoberto Uran tighter than the 1min 12sec gap to Nairo Quintana in 2014 and a world away from the more than four-minute advantages of 2013 and last year — it was also his least glorious in one way. Froome won three Tour stages in 2013, two last year and one in 2015. He also won a stage in 2012 when finishing second to his Sky team-mate Bradley Wiggins. 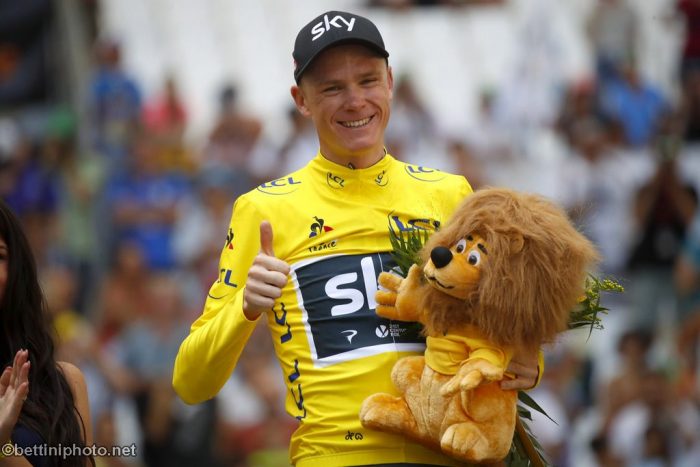 But this year he has not finished higher than third in a stage and in fact hasn’t won any race of any kind in 2017, until his expected coronation.

But Froome insisted it takes nothing away from his overall triumph. “Given the course that we had this year it was always the tactic to ride a three week race and not go out one day with the aim to blow the race apart or smash it with a stage win,” he said. “It was just about chipping away on every stage and making sure there weren’t any massive loses on any day.

“Yes, I suffered in the Pyrenees and lost 20 seconds that day up to Peyragudes (stage 12) but I’m very grateful it wasn’t any worse than that. “If you have a bad day in the mountains you can lose minutes.” Froome was actually jeered by sections of the crowd in Marseille’s Velodrome football stadium when he started his time-trial but he said there were no hard feelings given the battle that was about to play out with home hero Romain Bardet, who faded from second to third behind Uran.

“I think it’s perfectly normal with a Frenchman in second place, 23 seconds behind me on the start line this morning, being in the centre of Marseille and finishing in a football stadium,” said Froome, who was nonetheless cheered at the finish. “It’s not something I’m going to take personally. I’ll forgive them for that today. “But the support out on the roads has been incredible. It’s been bigger and better and I just want to thank them. “Those people make this race so special, it’s their race.

People grow up as a family tradition watching the Tour de France and it’s amazing to be a part of that.” And Froome gave short shrift to rivals who might hope he will slow down one day.

“I’m definitely getting older but at the same time, each year I’d like to think I’m still learning more, still developing as a rider. “I’m becoming a more complete rider. Something I’ve definitely worked on these last few years is descending, my positioning in the bunch. “But tactically I’ve still got more to learn.”