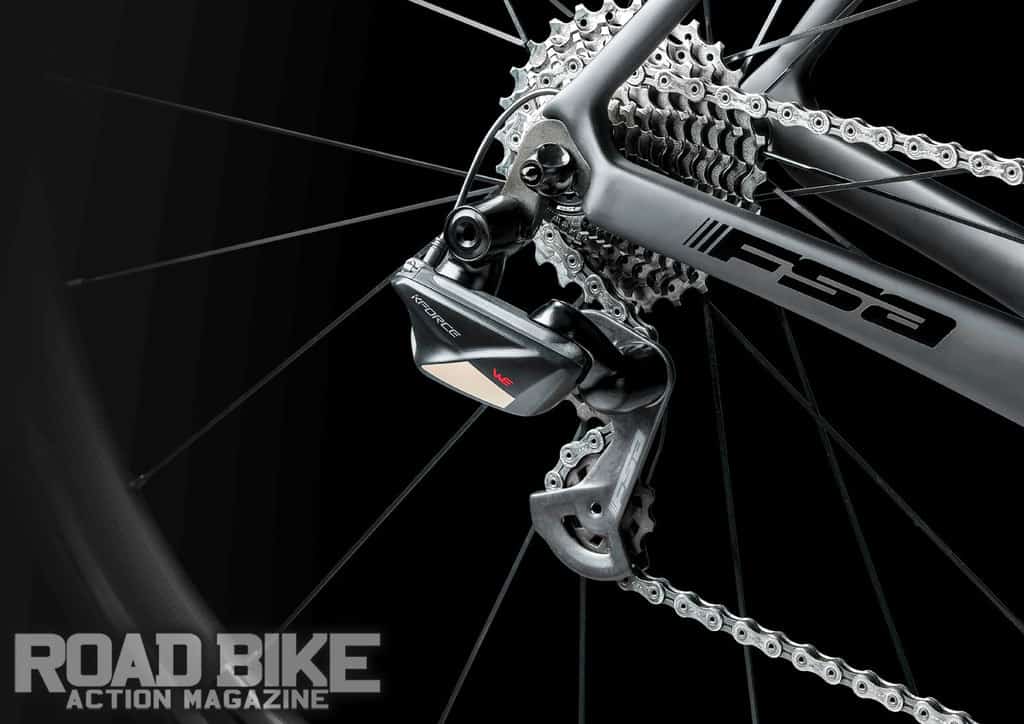 It has been years in the making and often teased along the way, but Full Speed Ahead has now formally introduced their WE (Wireless Electronic) drivetrain, which becomes the first full group from FSA and yet another electronic drivetrain to hit the market. Without anything groundbreaking compared to the other electronic groups from Shimano, Campagnolo and SRAM, it’s still a huge step for those wanting more options in componentry.

Plain, old, cable-actuated, mechanical shifting is hardly antiquated, yet nearly all the development on the higher end has been based around the elimination of the steel-braided cable. Look at Rotor’s brand-new Uno group that uses hydraulics for derailleur actuation and, of course, the completely wireless SRAM Red eTap group, which join Shimano’s Ultegra and Dura-Ace Di2 groups, in addition to Campy’s Super Record, Record and Athena EPS groups.

FSA’s WE electronic group features wireless shifters, while the front and rear derailleurs are wired together to share the same battery that mounts inside the seatpost. This is a somewhat hybrid combination of the other systems on the market—the fully wired Di2 and EPS designs and the completely wireless eTap. Critics are already saying the parts should more accurately be called SWE, as in Semi-Wireless Electronics. Extended battery life for the derailleurs was noted as a reason for not relying on a total wireless design, since a larger battery can be placed inside the seatpost than what can fit on each individual derailleur. Battery life is claimed to be up to two years for the shifters that use a coin cell and 2500 to 3700 miles for the derailleurs depending on rider shifting style.

While the expected availability for consumers is in the spring, FSA says they will have their sponsored teams using the components as soon as the winter training camps. And, as of the time this went to print, pricing was yet to be set. Rumors are that it will be priced competitively with eTap and Dura-Ace Di2, so if that’s true, we should see the full group come in at sub-$3000. In terms of weight, FSA claims the group weighs 2090 grams, which would make it approximately 150 grams heavier than the lightest electronic group on the market, which is SRAM’s eTap.

FSA is offering two versions of the WE shifters—standard and compact—which differ by 6mm in the length of the brake lever. As for the actual
shifting, each shifter is located directly behind the brake lever and has two buttons comprised of a single textured paddle that pivots in the middle. You press the top or bottom of the paddle to shift in either direction. Shifting can be completely customized through an accompanying phone and desktop app to control every aspect of the shift orientation. That means the left shifter could be set up to control the upshift into the big ring on the front with one button, while the other button shifts the rear derailleur down a cassette.

Basically, any way you want to configure the buttons you can. The app also lets you choose your preferred shift speed and shows battery life for the shifters and derailleurs. FSA has yet to announce details for satellite shifters that will be compatible with the WE group.

The front derailleur is the brain of the system and receives the signal from the shifters via ANT protocol. It’s not the same as ANT+; it’s a different signal that is customized and encrypted specifically for the front derailleur and shifters. The system does also use ANT+ for communication with a Garmin or other head unit. On top of the front derailleur there are two buttons and two LED indicators (with four colors of LEDs), which are used for pairing with the shifters, checking battery life and powering down the derailleurs for travel.

FSA very much took a futuristic touch to the rear derailleur with aesthetics that are uniquely its own. The derailleur doesn’t use a parallelogram design like other rear derailleurs; instead, it relies on its internal gearbox design to maintain alignment as it moves the cage across the cassette. Recharging the internally mounted seatpost battery is done by unplugging the wire from the rear derailleur and plugging that into the charger. Pretty simple.

FSA have obviously had their hands full with the electronic aspects of WE and prioritized getting the first version on the streets before adding hydraulics into the equation. FSA’s Mike Lawless told us, “There’s no date on a road disc brake. We are perfecting the current system first and going from there.” That means mechanical rim brakes are the only option at this time. The dual-pivot K-Force rim-brake calipers aren’t new to the line, but are updated to allow for rims up to 28mm in width.

The crank is an updated K-Force design with hollow-carbon arm construction and a BB386 EVO spindle. It accommodates both standard and compact chainrings, allowing options of 53/39, 52/36 and 50/34 all on a single crankset. For the cassette, two blocks of three cogs are fastened to a carrier, then individual cogs make up the remainder of the stack. Cassette gearing options will initially be limited to an 11-25 and 11-28, while an 11-32 will be coming later.

HOW DOES IT COMPARE?

Since we haven’t done anything more than a parking-lot ride at Eurobike on the WE, comparing actual ride performance isn’t something we can do. So, based solely on features and numbers, here’s our first-impression grades on some critical areas.

Installing the WE on a bike should be easier than the Shimano Di2 and Campy EPS, since only the battery and derailleurs are connected by wires, not the shifters. SRAM’s eTap and its completely wireless design beats all of them through its ease of installation.

Through the WE app you’ll be able to change shifter orientation, shift speed, check battery life and see just about every other aspect of the system. Having all the adjustability and insight you need right through the phone and desktop app is simple and convenient.

As far as the front and rear derailleurs go, they’re powered by a 7.4-volt lithium-ion battery that’s stored inside the seatpost, which has a claimed range between charges of 2500 to 3700 miles. Charging time takes about 1.5 hours and is done through the rear derailleur wire that doubles as a charging port. The CR2032 batteries in the shifters are claimed to last around two years.

Although we still can’t say how the WE drivetrain works in the real world, we’re just happy to see a fourth electronic drivetrain now jumping into the fray. FSA said a test bike will most likely be available sometime near the Sea Otter Classic in April. Stay tuned for more on FSA’s K-Force WE group.