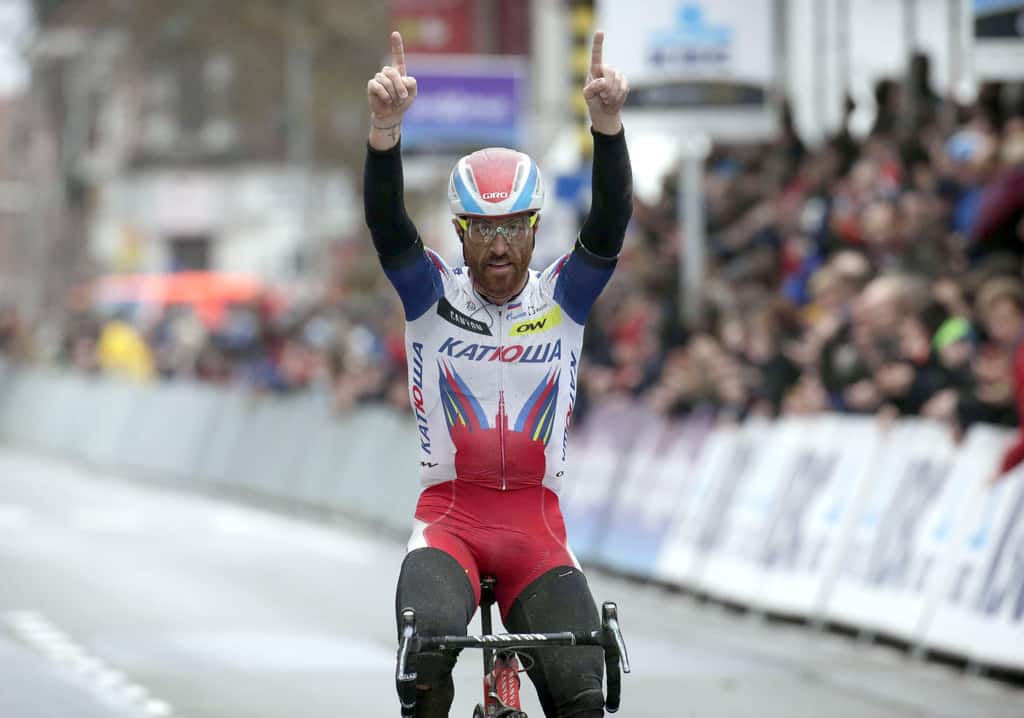 Italian veteran Luca Paolini timed his attack to perfection to take victory at the one-day cobbled classic race Gent-Wevelgem in Belgium on Sunday. Last year’s Paris-Roubaix winner Niki Terpstra took second at the end of the 240km race in dreadful conditions with blustery winds and driving rain as Friday’s E3 Harelbeke winner Geraint Thomas came third. With winds of up to 90kph (56mph) the race became an interminable slog and a battle of wills but it was Paolini’s opportunistic attack just under 6km from home to distance his five breakaway companions that proved decisive.

“It was an incredible race, one for the courageous,” said Paolini, who crashed twice and had to change his bike during the day. “Halfway through I was asking myself if it was reasonable to continue. But I resisted (the temptation to quit) and I’ve earned the best win of my career.”

After winning in 6hr 20min 55sec, Paolini added: “This victory is one for heart, courage but also intelligence. “I possibly wasn’t the strongest at the finish. Niki Terpstra and Geraint Thomas still had strong legs, but they were worried about each other and I took my chance.”

The 38-year-old Katusha rider had fought gamely to join the other five following the final climb of the race around 30km from the finish of the second of four cobbled classics. Dutchman Terpstra, Briton Thomas and Belgians Stijn Vandenbergh, Sep Vanmarcke and Jens Debusschere were chasing down a sole leader at that time, Jurgen Roelandts. Paolini managed to bridge the gap but compatriot Daniel Oss failed to do so as a six-man chase group formed. Debusschere sat at the back as Belgian Roelandts rides for the same Lotto Soudal team. However, he was caught 17km from the end, after which Terpstra and Paolini struck out for home.

Thomas reeled them in and as the three started playing a game of cat-and-mouse, first Vandenbergh and then both Vanmarcke and Debusschere managed to make contact once again. Roelandts, who later claimed it had been difficult at times to stay on the bike, by now had blown a gasket after a solo break of almost 60km.

Etixx-Quick Step team-mates Terpstra and Vandenbergh should have been the favorites at this point but when Paolini struck out for home, neither would sacrifice himself to bring back the wily Italian. Paolini’s gap gradually increased until he had a race-winning lead. When Terpstra finally launched a counter attack 3km from home, with only Thomas managing to keep contact, it was too late.

Vandenbergh came in fourth with Debusschere fifth and Vanmarcke sixth. The result, though, at least shows that the likes of Terpstra, Vanmarcke and Thomas are right in form ahead of the Tour of Flanders and Paris-Roubaix — with multiple winners of both Fabian Cancellara and Tom Boonen out injured, those three will be the big favorites. It was a stunning finish to a race that often favors a sprint finish and was won by German sprinter John Degenkolb last year.

But the hazardous conditions, cobbles and brutal short climbs along the parcours caused havoc with the peloton, which was breaking up within the first 100km. It was the successive climbs up the Baneberg and then Kemmelberg hills that proved the pivotal moment around 80km out. That was when the likes of former world champion Mark Cavendish lost contact with the leaders and a small select group started to form.

Others such as sprinters Degenkolb and Alexander Kristoff, as well as puncher Peter Sagan failed to keep pace with the strongmen. Long before then, world and Olympic time trial champion Bradley Wiggins, who is targeting victory at Paris-Roubaix in two weeks, had got off his bike and given up due to the conditions.

BIKE OF THE WEEK: OPEN MIN.D