Valkenburg, Netherlands, April 17, 2017 (AFP) – Philippe Gilbert will miss the rest of the Ardennes classics season, including Sunday’s prestigious Liege-Bastogne-Liege race, due to a kidney problem, his Quick Step team revealed on Monday.

Just 24 hours after continuing his fine start to the season by winning the Amstel Gold Race; one of the three major Ardennes classics, Gilbert, 33, said he was in pain and would need some time off. “When I fell (at Amstel), I felt the pain again but once back on the bike, the pain disappeared again,” said the Belgian, who is being kept overnight in
hospital. “Unfortunately, after the finish I felt once again pain in the base of my back and, alongside the doctor, I went to hospital for a check-up. “Fortunately there’s nothing serious and everything’s fine – I’ll recommence training in a week.”

As well as missing Liege, which he won in 2011, Gilbert will also skip
Wednesday’s La Fleche Wallonne, another race he claimed six years ago when he did the Ardennes treble. This season he has already won one of cycling’s ‘Monument’ races – the Tour of Flanders two weeks ago – as well as Three Days of De Panne. Alongside compatriot Greg Van Avermaet and Poland’s Michal Kwiatkowski, whom he beat in a sprint finish on Sunday for his fourth Amstel success, he has been one of the stand-out performers during the first few months of the season.

“It’s been one of my best years and, when I look at my results, I’m
delighted,” added the Quick Step rider, who was world champion in 2012. “Being competitive at the same time on the cobbled and Ardennes classics, helping the team to be the best in the world, gives me a lot of satisfaction.” 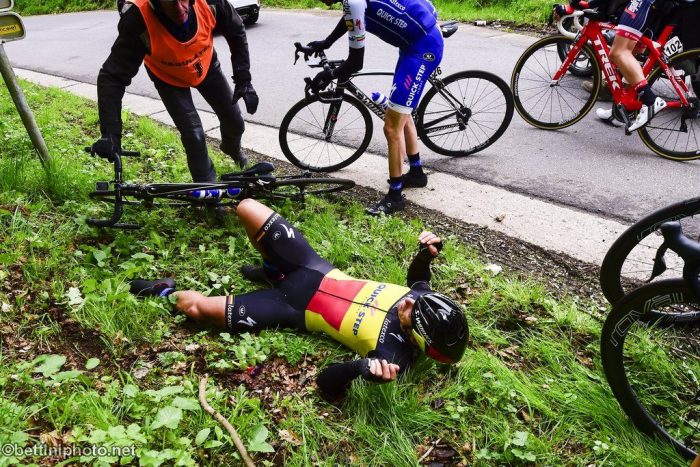