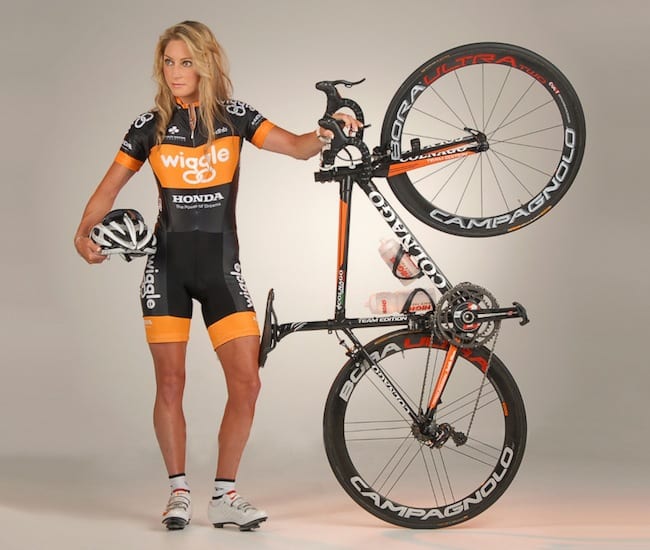 INTRODUCING THE WIGGLE HONDA PRO CYCLING TEAM
Although the 2013 season continues to see hardship for many women riders trying to make a career out of racing in America, obviously things are looking better for their racing sisters Down Under. With the launch of the Wiggle Honda Pro Cycling team, Australia (and Great Britain owing to title sponsor Wiggle) has put itself in the center of action for racing around the globe. The team is led by Australian Commonwealth Games Champion Rochelle Gilmore and two time World Champion Giorgia Bronzini who hails from Italy. Team sponsors include the UK-based bike e-tailer Wiggle and Honda Europe, with a goal not only to win races, but to add a new level of professionalism to women’s cycling and provide riders with all the necessary tools to perform as top-level athletes.

When we contacted the team, the racing season had already begun-and it started off right when 22-year-old Emily Collins claimed both the team’s first UCI victory of the season, but also the biggest win of her career at the Omloop het van Hageland-and team riders were spread around the globe. Luckily we were able to get some long-distance time with team spokesperson, Myfanwy ‘Miffy’ Galloway, who gave us the breakdown on the new team and riders. 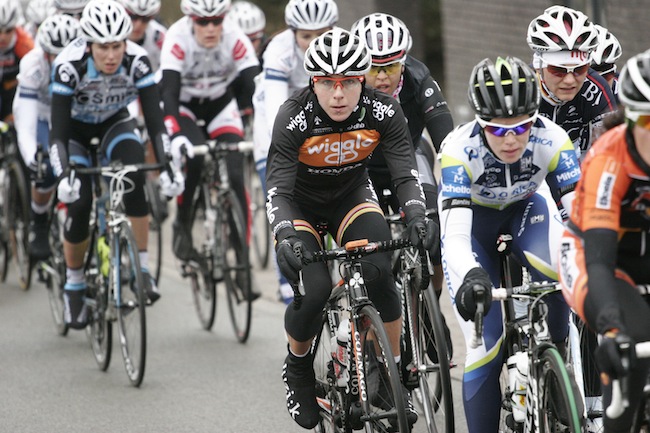 RBA: What races will be the main focus for the team in 2013?
Miffy: The team has been built with a particular focus on the classics and sprint-style races. Whilst we will be targeting results in these types of races, we are young and ambitious with the strength and talent to make an impact in every race we do.

RBA: Will there be any races in the United States? And from the perspective of your racers, do you think the women’s peloton would welcome a multi-day stage race in the U.S., such as a female version of the Tour of California?
Miffy: At this stage, the team has plans to travel across to Canada and the United States to compete in the Montreal World Cup and Philadelphia Classic. Most of our riders have previously competed in these races and really enjoyed the overwhelming levels of support and warm hospitality they have received. The racing scene in the United States differs slightly from the European scene in the sense that race organizers aim to make the racing as exciting of an experience for the fans as it is for the riders. The races are often hosted as main attractions at festivals and street parties, and the short circuit races build on the atmosphere and provide a perfect platform to help showcase the tremendous ability and talent of our athletes.

A Tour of California run in parallel with the men’s event would definitely help the growth of women’s cycling. Stages run on the same roads, finishing an hour or so before the men come in, would work perfectly. It would not be a quick fix to a lot of the problems currently being faced in women’s cycling; however, it would definitely be a step in the right direction. The increased television exposure would increase the appeal to sponsors looking to come on board and also potentially assist in increasing the shrinking international racing calendar.

RBA: A Wiggle Honda Pro Cycling team press release stated, ‘Every rider given everything she needs to achieve her full potential.’ What does a rider need to achieve her full potential?
Miffy: The Wiggle Honda Pro Cycling team has a unique set of values and ambitions upon which it was founded, one of which was to create an environment for the riders in which they are the priority and in which they get what they need to get the best out of themselves. Through the generous support of leading technology and equipment partners, along with a team of passionate and dedicated support staff, the team endeavors to limit the external influences that in the past may have restricted performance. The deal with Wiggle.co.uk enables the team to provide better salaries and the supportive environment the athletes deserve and need so they can reach their full potential.

RBA: Having already led a successful team, what new challenges will this bring Rochelle Gilmore?
Miffy: Owning and managing a women’s professional UCI team has been a long-time ambition for Rochelle. Drawing from her experience as a rider and dissatisfied with the treatment of female riders in the sport, she created the team last year. She is passionate and committed to raising the professionalism of women’s cycling, and with the support of global partners such as Wiggle.co.uk and Honda Motor Europe, she is singlehandedly on her way to doing so.

RBA: What criteria were used to recruit team members?
Miffy: The team was founded with the goal of targeting the classics and sprint-style races. With an average age of 23, what the team may appear to lack in experience on the road, it makes up for in raw talent and potential. Rochelle wanted to provide a stable platform for riders looking to transition from the track to the road, just as she did, and these factors were also taken into careful consideration in the recruiting process. Whilst previous results and experience did play a factor in rider selection, the ability of each rider to work together and contribute to a team result was seen as an equally important requirement.

RBA: How much involvement will Bradley Wiggins and his foundation have with the team?
Miffy: Bradley Wiggins and the Wiggo Foundation are committed to raising the level of professionalism in women’s cycling. Wiggins’ provision of generous support assistance and encouragement will further enable the girls to fulfill their potential out on the road.

RBA: Most of the Wiggle Honda riders have blogs; how important is social media participation to the team? Do you feel it helps build a bigger fan base and return on investment for sponsors?
Miffy: Social media has become an important platform for cycling enthusiasts to be able to follow women’s cycling. We are consistently seeing more professional female cyclists who blog about racing and their experiences as riders, and this is helping to bring to the forefront some important issues currently experienced by female cyclists. The team hopes that through their use of social media, we will be able to make women’s cycling more accessible to our supporters and fans and, in doing so, provide recognition to the multitude of talented and dedicated athletes we have in the sport. One of the team’s main ambitions upon foundation was to assist in raising the professionalism of women’s cycling, and social media will be an important medium in enabling us to do so.

RBA: What sorts of charitable works will the team participate in?
Miffy: The team feels very fortunate to be able to use its position in professional sports to provide support assistance within the community. Many of our riders personally represent charity organizations, and, as a team, we aim to support these riders and the work they do for the community. Our partnership with Wiggle.co.uk has seen us attend the Action Medical Research Champions of CycleSport Dinner in January, an event that helped to raise over 180,000 toward research around Down syndrome, meningitis, epilepsy, cerebral palsy and premature birth. Olympic Champion Joanna Rowsell is also an official cycling ambassador for the charity, and her role has seen her participate in numerous long-distance charity rides. Dual Olympic Champion Laura Trott is also another active supporter of local charities. Her success as an athlete competing with asthma has seen her become a role model for other asthma sufferers through her work with Asthma UK and Bliss.

Whilst it is difficult with such a busy competition calendar to be able to take time out as a team to participate in charitable work, it is important for the team to be able to give back to the community. This is why the team will be actively taking time out of its schedule in August to support the Prudential RideLondon events.

QUICK WIGGLE FACTS
RBA: Are there any special foods you always eat?
Mayuko Hagiwara (JPN): I eat lots of root vegetables because they are good for conditioning my body.

Anna Bianca Schnitzmeier (GER): I’m combining quark (a special milk product from Germany) with everything- for dinner, lunch or breakfast.

RBA: What is one item you must always bring on tour?

Lauren Kitchen (AUS): My racing license and my phone.

Elinor Barker (GBR): Big headphones for when I need to block out the world for a bit.

RBA Shootout: The Kings of Comfort