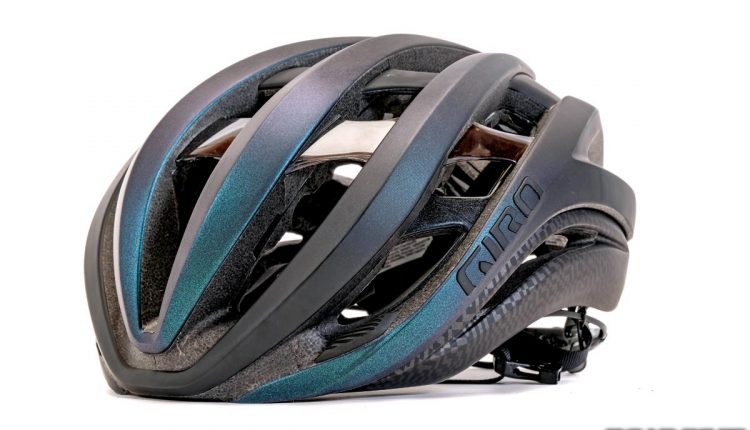 As they have done throughout their three-decade history, Giro is once again pushing the limits of safety, comfort and style in cycling. Recently introduced in the Tour de France by Team BMC, the Aether is the NorCal brand’s latest pursuit of the next generation of helmet technology.

MIPS technology (Multi-directional Impact Protection System) is a patented plastic liner that has become a recognized safety feature for both pro and recreational riders alike. The purpose of the plastic liner is to reduce the effects of the linear force on impact by allowing for a small amount of movement in shear, which lets the helmet rotate independently from the head. By minimizing the compression forces on impact at a slight upcharge, MIPS is able to provide an added layer of safety over non-MIPS helmets.

The Aether takes the next step in the progression of the MIPS design with what’s now called “MIPS Spherical,” which is composed of an inner and outer shell. The inner shell works like the plastic liner from the previous MIPS technology, only more comfortably. The outer shell is progressively layered with a denser material at the base and six pieces of polycarbonate molds on the edges. Typically, when there are more pieces added, there’s usually less venting; however, that is not true for the Aether. With ventilation always being a critical priority, Giro designed vents that force air through the helmet by creating a space in between the two shells. The Aether’s design is more aerodynamic than Giro’s other performance road helmet, the Synthe.

To keep the helmet in place, Giro chose to use the Roc Loc 5+ retention system, it can be adjusted vertically to the back of your head and tightened with a dial. Also notable is the integrated “eyewear docking port,” or two rubber stops on the front of the helmet designed to hold your glasses when you aren’t using them.

What impressed us most about the performance of the Aether was how cool it kept us. The air rushes through the vents and maintains a cooler temperature than other aero-optimized helmets, such as the Giro Synthe. Except for some occasional flapping straps on speedy descents, the helmet produced no wind-rushing noise. The helmet fit securely, thanks to the Roc Loc 5+ retention system. Our test riders mentioned how much more comfortable the new two-shell MIPS design is than the older plastic inner liner version.

When shopping for a helmet, our priorities should be no different than yours: we want one that is safe and comfortable with good looks and a price we can afford. With Giro’s new Aether, we can easily check those three boxes. At $325, this is an expensive lid for sure. Previous to the Aether, the $245 Synthe (with MIPS) was the high-end offering. For those less concerned with mirroring the pro riders, it’s good to see that Giro offers a MIPS-equipped Foray at $85.

• Safety has no price