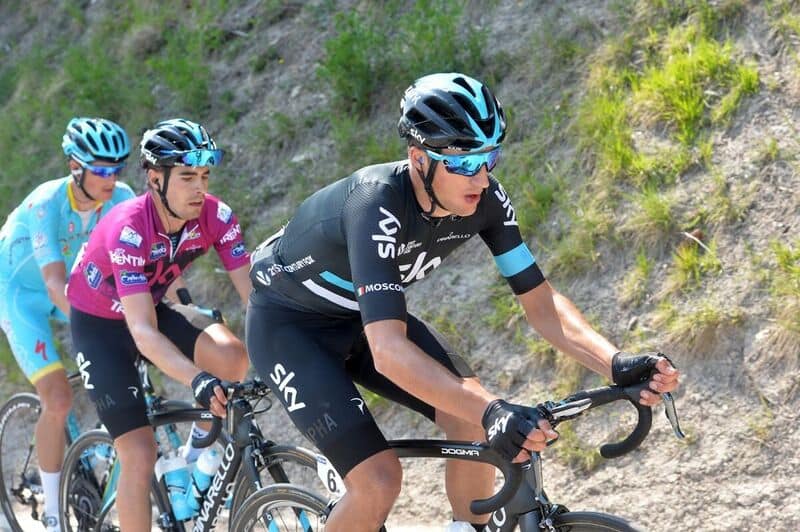 Who knows if, during his defense of the leadership in Giro del Trentino Melinda’s final stage, Mikel Landa had the time to notice the pink shade of the blossoming apple orchards that framed his winning effort in Val di Non: that pinks looks like a good omen, after seeing Team Sky’s Spaniard impose his supremacy until the fourth stage of the GS Alto Garda race, the weary Malè-Cles of 161 km. But do not think it was an easy job: Landa’s throne was everything but assured until the final stroke.
Estonian Tanel Kangert (Astana Pro Team) was not certainly a top favorite at the beginning of the race, but he ended up within two seconds of the most unlikely of victories. After reaching Riva del Garda last Monday with only two wins in his pro palmares, Nibali’s trusted domestique doubled his spoils in the space of two days, taking also the fourth stage after the third, this time by edging a 13-man sprint. “I knew I was a decent sprinter, but I did not expect another win – the Estonian said – as also today I came back after being distanced on the climb, the strongest on the team was Fuglsang (third overall), but we could not make a difference.” And to those asking if he has second thoughts on a couple of seconds lost in celebration on yesterday’s finish, he replies honestly: “No regrets, I am happy with two wins, as the strongest man took it all.”

It was the day in which Vincenzo Nibali (Astana) redeemed a sub-par edition for him with a brave breakaway effort along with Damiano Cunego (Nippo-Fantini) and Alexander Foliforov (Gazprom-Rusvelo), eventually rewarded with the most combative rider’s jersey: regardless of the result, the move confirmed the Italian Champion’s desire to honor a race he has always shown to love. But today, the first step of the podium was for his main rival for the Giro title.

Landa was simply the strongest uphill over the four days of the race, as he managed to respond to the attacks from all his rivals (from Astana and Ag2r in first place), often even in the lack of support by his teammates. “It was hard until the end, I even had to discover my sprinting skills to secure the decisive bonus, – said the Spaniard. – Today I had a teammate on my side at the end, but having managed to control and win the race even when down in numbers gives me huge confidence in the view of the Giro d’Italia.”

History and facts show that Giro del Trentino Melinda is the perfect preparation for the Giro d’Italia, and the balance of the challenge against Nibali leans now to his side. He added: “Rather than a stronger Nibali, I was expecting a more combative Nibali. But Vincenzo knows himself very well, he was coming out of a training camp, and I know he will be in great shape at the Giro.” Their head-to-head clash is just postponed.

For the first time in its history, the Giro del Trentino Melinda ends without Italian wins: no stages (it had happened already in 2011, when Michele Scarponi won the GC), nor the overall. That also underlinines the growing international participation at the GS Alto Garda event, that again offered a highly spectacular and technical race. “To enjoy the challenge among those champions in all the beauty of our land is our reward for our organizational efforts, – GS Alto Garda President Giacomo Santini commented. – This year, our Giro was broadcast live in over 50 Countries all over the World, and welcomed about 100 international press representatives. Those are the figures of an event on a rising curve, that found a great winner in Mikel Landa.” If the pink of the orchards will bode well for him, we will find out soon.
Photo: Daniele Mosna