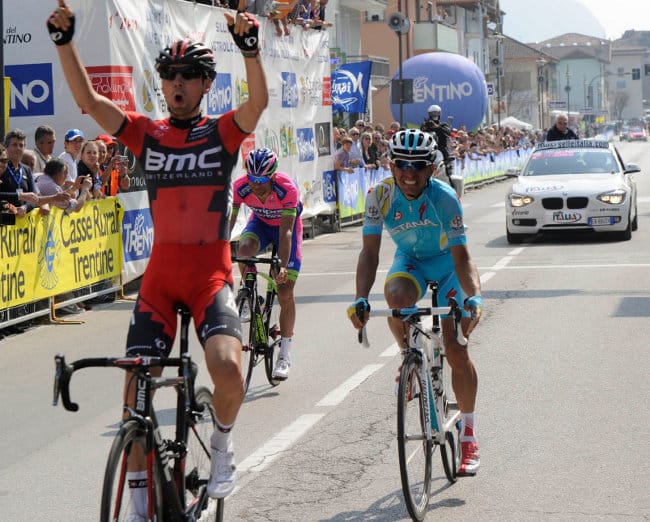 An interlocutory stage did follow its plot. The main GC contenders take a breather, and in Condino (Valle del Chiese) Ivan Santaromita finally delivered the first Italian win at the 37th Giro del Trentino. The 28-year-old BMC rider from Varese took just his second win after Coppi&Bartali’s GC three years ago, managing to edge Paolo Tiralongo and Michele Scarponi. The trio was previously part of an 11-man breakaway started on the first KOM to Fai della Paganella, while the main contenders took the opportunity to save energy and did not shut on the attempt. ‘In the morning, Cadel Evans and Baldato told me to make my own race, and try for the breakaway. Day like these reward you for all the sacrifices you make during your career. And it’s great to enjoy the great taste of a win after so long’ Santaromita explained.

Maxime Bouet saved the leader’s fuchsia jersey for another day, and sees his dreams get closer and more concrete: relying on a strong 3.19 advantage, no one can play down the Frenchman’s chances, even though the final queen stage, with the new uphill finish to Sega di Ala after 166,8 km (including  the Brentonico ascent on the way) will be the final showdown, saying the final word on this Giro del Trentino. ‘Tomorrow, I will need to cover the Astana guys, as they have plenty of riders who are very suited to high gradients like Sega di Ala’s. With such an advantage and the condition I had three weeks ago, I could have negotiated through tomorrow with little worry. Nevertheless, I am still hoping for this ? for myself and for my team, who are doing an outstanding job’ Bouet commented.

Everything ordinary? Condino’s stage was not easy at all, and some of the favorites might regret not putting it to good use, trying to make the race harder. A tough and tricky stage, as proved by Domenico Pozzovivo, last year’s winner, who was ruled out by a crash in the early going (ribs contusions and a bad wound in his elbow for him), while Pavel Kochetkov and Michael Rodriguez moved down in the standings: Siutsou still has 3’19’ to recover from Bouet, with Wiggins in third at 3.48′. Today’s winner Santaromita climbed to the fifth sport, while Michele Scarponi took the king of the mountains’ jersey after yesterday’s disappointment in Vetriolo.

All in all, everybody expects a great duel between Wiggins and Nibali on the feared final climb, not ruling out some strong displays by rivals like Evans and Basso. Wiggins starts with the edge of having Siutsou on his side, so the first move will be up to Vincenzo. In such a case, get ready for a sparkling show, available to all cycling fans on TV, on RaiSport2 and Eurosport, from 14,30 to 16,00. It that becomes a waiting game, Bouet could finally fulfill his dream, but that will not happen without another great performance. He might win the Giro del Trentino or not, he definitely won everyone’s sympathy.