Tortona, Italy, May 19, 2017 (AFP) – Colombia’s Fernando Gaviria underlined his status as the 100th Giro d’Italia’s top sprinter after powering to an impressive fourth victory at the end of stage 13 on Friday.

Gaviria, of the Quick Step team, looked out of contention during a hectic dash for the finish but produced a ferocious late burst to stun Ireland’s Sam Bennett (Bora) at the end of a mainly flat 167km ride from Reggio Emilia to Tortona. Dutchman Tom Dumoulin, of Sunweb, finished close behind in the race leader’s pink jersey to maintain his 2min 23sec lead over race favorite and 2014 champion Nairo Quintana (Movistar). But before the race for the ‘maglia rosa’ moves back into the mountains on Saturday’s 14th stage to the summit finish at Oropa, Gaviria enjoyed another day of glory on his race debut.

The Giro sprint field may be missing the likes of German Marcel Kittel,
Briton Mark Cavendish and Slovakian Peter Sagan, but Gaviria, a former two-time world champion in track cycling’s omnium event, has been beaten only twice in five sprint finishes so far. He lost out to German giant Andre Greipel on stage two and finished runner-up to Australian Caleb Ewan after a photo finish decision on stage seven.

Dimension Data team sprinter Cavendish is not competing as he continues his recovery from a bout of mononucleosis. But even before the stage started, the Manxman said on Twitter: “Well thank heavens Fernando Gaviria isn’t down to ride the Tour de France this year! Would make all our jobs VERY hard.” On his maiden three-week race, Gaviria has already surpassed his mountain-climbing compatriots for the most number of stage wins on the Giro.

The 22-year-old from Medellin said he is still smarting after losing out on Olympic omnium gold in Rio last year where he finished off a podium featuring Italy’s gold winner Elia Viviani, Cavendish and Lasse Hansen of Denmark. “I would need to win three monuments to help me make up for the Olympics,” Gaviria said, referring to cycling’s five ‘monument’ one-day classics. “And a world championship title.” But, with one eye already on winning the Italian classic Milan-SanRemo, he
added: “I want to become a classics rider.”

Gaviria tightened his grip on the sprinters’ ‘ciclamen’ jersey, which he
intends to secure if he manages to get over the mountains in a climb-heavy third week to finish in Milan on May 28. Dumoulin, meanwhile, avoided mishaps as he looks ahead to Saturday’s stage and beyond. “Today was once again a great job from the team,” said the Dutchman, who took command of the race with an impressive 10th stage time trial win on Tuesday. “Looking ahead to tomorrow, things will be pretty steady during the day and then it will be full gas onto the last climb. “The coming week will be more tricky but we just have to stay calm, stay sharp and hope for the best.” 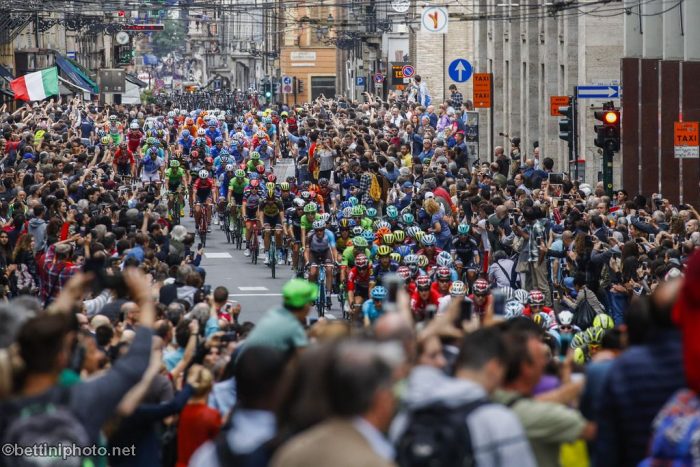 The Dopers Among Us (Still)