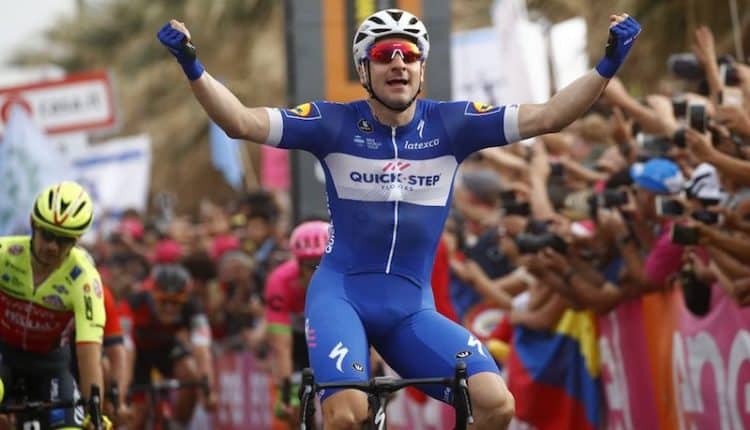 Dennis claimed three bonus seconds in an intermediate sprint earlier on the 167-kilometre stage from Haifa to overcome his two-second deficit from Friday’s opening time-trial in Jerusalem. But the 27-year-old said his BMC team had to convince him to go for the bonus seconds.

“I wasn’t overly keen to do it but the team said we’re doing it and they did an excellent job, they delivered me perfectly,” said Dennis. But first he had been mindful to make sure Dumoulin wouldn’t fight him to keep the jersey, although he knew third-placed Victor Campenaerts would.

“I was surfing around the peloton a little bit asking a few other riders: ‘what are you going to do, are you going to sprint?’ “Dumoulin said: ‘I’m not too bothered’. I knew Campenaerts wanted it pretty badly, you could tell that when he was trying to make the breakaway for the first 40km!”

Campenaerts had started the day level on time with Dennis but is now three seconds back with Dumoulin second at one second. Race favourite Chris Froome finished safely in the peloton after a bunch sprint in the Mediterranean coastal resort of Tel Aviv. The 32-year-old Briton was nursing cuts and abrasions to his right-hand side, suffered in a training crash in Jerusalem on Friday. He had surprisingly lost 37 seconds to Dutchman Dumoulin — his chief rival for overall victory — in the race against the clock, later admitting he had been riding in pain.

On Saturday, Olympic omnium champion Viviani, 29, seemed to have left his charge to the line quite late but burst through from well behind to emerge from the back wheel of Irishman Sam Bennett and surge to victory.

“The win, everyone was expecting (it) but doing it is never easy,” Viviani, who won his second stage at the Giro, told Eurosport. “I was really nervous this morning, I tried to overcome a bit this emotion but it’s not easy.” Italian Jakub Mareczko was second with Bennett taking third. Viviani could have denied Dennis the three bonus seconds he needed at the second intermediate sprint 91km into the stage but he didn’t try to.

“He sprinted but he didn’t go full (gas),” admitted Dennis. “It was good to see him get the stage win after, not gifting it to me, but he was kind let’s be honest!” Viviani, who took the sprinters’ cyclamen points jersey with his stage win, simply said it hadn’t been his objective.

“I didn’t want to get in the middle of the pink jersey battle and BMC had done so much work (for Dennis),” said the affable Italian. “I was happy with a few points because I was going for the cyclamen jersey and that’s not won in intermediate sprints but by winning stages.”

Dennis has now worn the leader’s jersey at all three Grand Tours, following opening stage success at the Tour de France in 2015 and last year’s Vuelta a Espana. As a time-trial specialist trying to transform, as Dumoulin has done, into an overall contender, Dennis is not going to give up the pink jersey lightly.

“The first thing is to try and keep it tomorrow (Sunday) so I can wear it in Italy,” he said. “I think the third week and even the second week is still a big unknown for me. I’ve got a lot to learn still.