Cagliari, Italy, May 7, 2017 (AFP) – Colombian sprinter Fernando Gaviria finished off a cunning tactical move by his Quick Step team to win the third stage of the Giro d’Italia and secure the race leader’s pink jersey on Sunday.

Gaviria, competing in his maiden Grand Tour, emerged from a small bunch sprint after the Belgian outfit used tough crosswinds to cause a split in the peloton with 10km to race to power over the line in triumph at the end of the 148km ride from Tortoli to Cagliari. Germany’s Rudiger Selig (Bora team) finished a distant second with Italian national champion Giacomo Nizzolo (Trek) third. On the third and final stage on Sardinia and ahead of the first rest day, Gaviria takes the pink jersey from overnight leader Andre Greipel of the Lotto team.

Greipel, an 11-time stage winner on the Tour de France, claimed his seventh stage victory from Giro when he powered to victory in Tortoli on Saturday. But the German’s first spell in the “maglia rosa” (pink jersey) proved brief after he was one of several stage contenders caught short by Quick Step’s audacious but impressive move. A three-man breakaway was allowed to wriggle free early on and went on to build a maximum lead of three minutes on the peloton. But their bid collapsed with less than 25km remaining when the last remnant of their escape, Czech Jan Tratnik (CCC), was reeled in.

The run-in to Cagliari looked a simple affair on paper, but with tough
crosswinds to negotiate and a lengthy home straight that enticed the fast men of the peloton, nerves soon began to fray amid fears teams would work to cause splits. The inevitable finally happened with a little under 10km to race when several Quick Step riders, including Gaviria, upped the pace and broke away from the main bunch. Greipel’s Lotto team battled to close the 20-second gap, but it was futile. The frontrunners were left unchallenged on the long home straight, with
Gaviria making no mistake with an impressive finishing burst that left his few rivals in his wake.

It was the 22-year-old’s maiden stage win in a three-week race, which he will now resume as leader on Tuesday, when  — after the first of three rest days Monday — the peloton tackles the first summit finish of the race to Mount Etna. 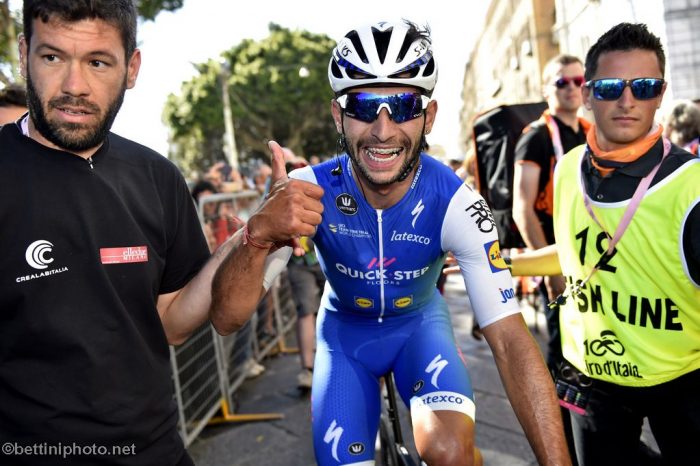