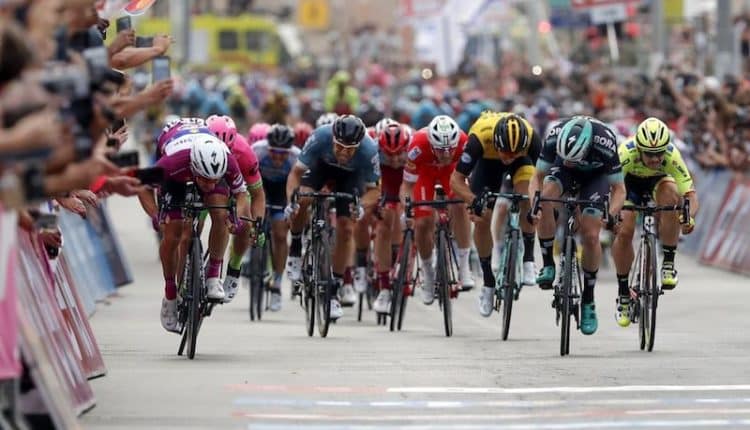 RBA/AFP – Elia Viviani made it a double delight in Israel on Sunday as he won his second Giro d’Italia stage in a row in a bunch sprint finish at Eilat.

The Italian survived a near-brush with the safety barriers on the side of the road as he sprinted to the stage three finish in the Red Sea resort, edging out compatriot Sacha Modolo with Irishman Sam Bennett third. Australia’s Rohan Dennis kept the race leader’s pink jersey.

Viviani was perfectly placed on Bennett’s back wheel as the sprinters launched their charge to the line but just as he tried to dart out from behind the Irishman, Bennett lurched across the road. He went from the far left to the far right, almost barging Viviani into the barriers. But the experienced Italian kept his cool and leant his shoulder into Bennett, who veered back to the left, leaving a channel for Viviani to burst through and win.

Viviani, 29, wasn’t best pleased with Bennett but his victory proved ample compensation. “As everyone saw, he changed direction. Of course, if I’d come second I would have appealed because he changed direction and I had to slow down,” said Viviani. “We won so we’re not looking to create tensions amongst our competitors but there was a moment where we touched, either I had to lean on him or I would have to break.”

The fast-finishing Modolo pipped Bennett for second at the end of the long, straight 229-kilometre stage through the barren Negev desert, a very different backdrop to the first two stages around Jerusalem and then from Haifa to Tel Aviv.

Having been surprised by the lush green vegetation at the side of the road on Friday and Saturday, Viviani now got what he was expecting. “Today was maybe what we had been thinking about: the middle of the desert!” he said. “But it was really up and down so finally it was not a really easy day. We did around 2,000 metres of up and down and at some point the group was really stressful about the wind.”

The Quick Step rider added: “It was a classic sprinters day: 230km of stage, up and down all day and then really fast in the last part.” Race favorite Chris Froome and last year’s winner Tom Dumoulin both enjoyed an uneventful day riding safely in the peloton to finish in the same time as the winner. Dumoulin remains in second, one second behind Dennis with Portugal’s Jose Goncalves up to third at 13sec after Belgian Victor Campenaerts lost time at the finish.

Having previously held the race leader’s jersey at both the Tour de France and Vuelta a Espana, this was the first time Dennis had managed to hold onto one for more than a day. But he admitted he was worried during the break-neck run in to the finish where the peloton was strung out around several roundabouts.

“That was stressful!” said the BMC rider. “That was nerve-wracking, a little bit scary but we got through it unscathed. “I was a little bit nervous at probably 5km to go that I wouldn’t hold the jersey. “It was maximum effort to move up as much as possible through the roundabouts.”

Froome remains in the top 20 with a 38sec deficit to Dennis ahead of Monday’s rest day before the fourth stage begins in Catania following the transfer from Israel to Sicily. After three days racing in Sicily, the Giro will move onto the Italian mainland, although not before the overall contenders have had a chance to test themselves on a summit finish at Mount Etna, the highest active volcano in western Europe.

Sunday saw a three-man breakaway go clear almost right from the start with Canadian Guillaume Boivin making it into the escape group for the second day in a row. He and Italian Marco Frapporti lasted almost 225km in the lead in scorching temperatures well over 30 degrees Celsius before they were swallowed up by a charging peloton.

Must Be A Limit for How Far Grand Tour Departs