Peschici, Italy, May 13, 2017 (AFP) – Spain’s Gorka Izagirre kept the hosts waiting for a win at the 100th Giro d’Italia after capturing a thrilling eighth stage victory on Saturday. Luxembourg’s Bob Jungels retained the race leader’s pink jersey with a six-second lead on Britain’s Geraint Thomas (Sky) after a 189km ride from Molfetta in the heel of Italy’s boot to the spectacular hilltop town of Peschici overlooking the Adriatic sea.
But the Quick Step rider, whose race lead came under threat from Italian Valerio Conti during an earlier, 15-man breakaway and again when Spanish rival Mikel Landa (Sky) launched a late, futile attack, flirted with disaster when he crashed on a downhill section. “It was a fight the whole day through,” said Jungels, who is expected to come under more pressure on Sunday’s 149km ninth stage to the race’s second summit finish at Blockhaus. After stages in Sardinia, Sicily, Calabria and now Puglia the pressure has been building on the hosts during a widely-feted 100th edition. The last time the home fans had to wait so long for an individual stage win was in 2010, when Filippo Pozzato broke the duck with victory in the 12th stage at Porto Recanati.
After Izagirre avoided a last-gasp collission with Conti, who crashed on
the final bend leading to the uphill home straight, he ensured the ‘tifosi’
would be made to wait at least another day, thus claiming his first Giro stage success. Italian Giovanni Visconti, the Bahrain teammate of defending champion Vincenzo Nibali, finished second at five seconds behind with Spain’s Luis Leon Sanchez (Astana) in third. “It was a very hard stage,” said Izagirre. “I’m very happy I won. I got an opportunity and I’m glad I didn’t miss it.”
The pressure appeared to ease on the hosts when Visconti and Conti (UAE) got into an early breakaway of 15 riders that, thanks to the twisting turns and climbs of the undulating terrain that followed 80km of flat, built a promising lead on the peloton. In the first hour alone, they covered an impressive 54.6km and for a short time Conti, just over two minutes in arrears overnight, was in the virtual race lead. But with a prestigious stage victory up for grabs, they were in for a frantic finale after several teams took turns at the front of the chasing peloton.
By the time the four frontrunners hit the foot of the 1.5km punt to the
uphill finish line, their lead had dropped to just 33secs — and the peloton was closing in fast. Conti had spent considerable time pulling the escape as he targeted the coveted pink jersey but crashed on a hairpin bend leading to the home straight. Izagirre was just behind, but, unlike Visconti and Sanchez, he avoided having to brake to avoid the Italian. That allowed the Basque rider to take the bull by the horns and power to victory.
The peloton crossed the line just 12 seconds later, Jungels one of several riders left battered by a tough day of bike racing. “It was a great day of cycling, but it was super warm and on the climb I was suffering a little,” added the Luxemburger. “I didn’t really expect Mikel Landa to attack but I think it was a move to challenge the other teams. “In the end I have to thank my teammates a lot for keeping me in the lead.” 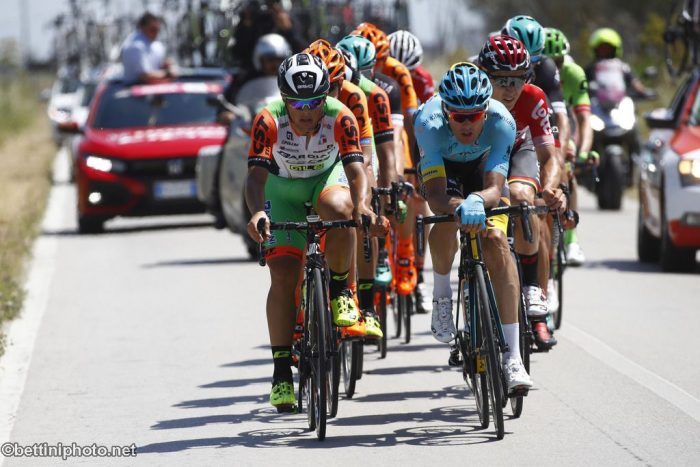