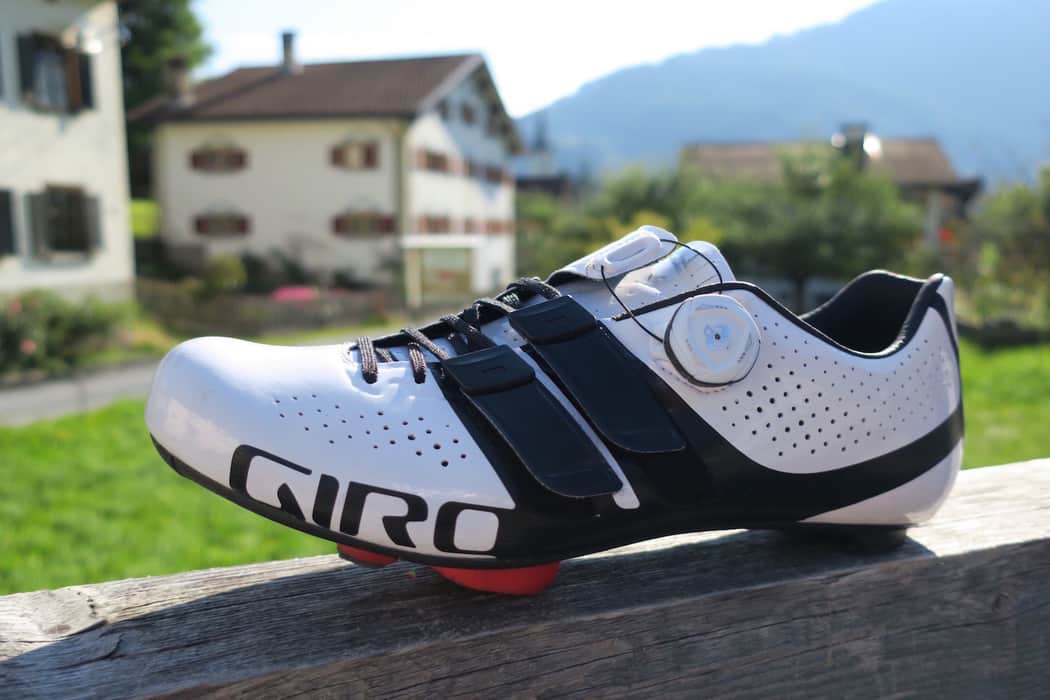 Nearly all high-end cycling shoes use one of three closure systems: Velcro, rotating dial, or laces. If there’s an award for using all three on a single pair of shoes, well, Giro just won it. The new Giro Techlace uses an upper BOA closure combined with two Velcro straps that attach to laces. As Giro sees it, why not combine the best elements from each closure and put it into one shoe?

Giro can be credited with bringing laces back from the brink of obscurity with the Empire line of shoes that have been astoundingly popular mainly because of the lacing pattern’s comfort, which helps evenly spread the pressure across the entire top of the foot instead of one or two pressure points. Unfortunately, on-the-bike adjustability is a true challenge on a lace shoe since even the best riders aren’t quite skilled enough to tighten and re-tie a shoe while riding. Coming up with a solution to this gave Giro the opportunity to add in something else their customers were asking for–a BOA dial.

After a two-year development, and help of BOA, the Factor Techlace combines key elements to achieve comfort and adjustability while still keeping them impressively light at 420 grams (claimed weight for the pair in size 42.5). They use the same EC90 SLX outsole that is found on the Prolight SLX, in addition to the same Evofiber microfiber upper and come stock with Supernatural insoles that allow arch adjustment.

Giro plans to offer three colors of the Factor Techlace there will be four custom BOA dial colors and six colors of laces so customers can easily match their bike and team kit. Some of the soon-to-be-released clothes in the Giro apparel line will also feature some of the same colorways to tie together the entire ensemble. Delivery of the Factor Techlace is set for October.

We spent two days riding the Factor Techlace in the Swiss Alps where the climbs are longer than a summer day in Sweden and unseasonably warm temperatures made for much hotter rides than anticipated. Because the Factor Techlace shares the same last as the previous Factor and Empire, both of which we’ve spent time in, the fit was true and sizing was consistent. Once tightening down the BOA, we could use the straps to tighten the laces as much as we desired, achieving a snug fit in the mid-foot back. The toe box was quite comfortable, and in our opinion, would fit a fairly wide range of foot widths.

Just jumping into a new pair of shoes and heading out for a couple of big climbing days isn’t really an ideal method, but as it turned out, there weren’t any fit issues that arose. On the bike, there wasn’t much to think about, they breathed well and offered ample adjustability–on and off the bike. They also happen to be one of the lighter shoe options on the market, yet Giro teased the release of another shoe that would be in the 300-gram range for the pair. That shoe will be introduced at Eurobike in two day’s time. We’ll feature a long term review of the Factor Techlace once we get some more miles in them.