Fox introduces a suspension fork that could redefine the gravel limits 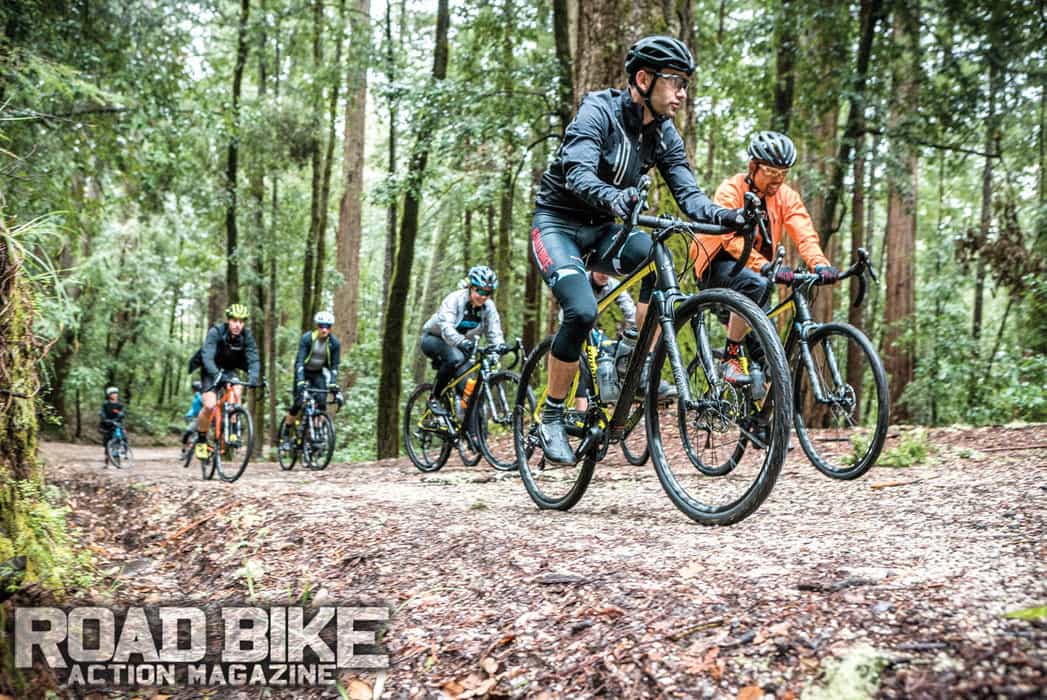 Yes, we‘ve been here before. Back in 1993 RockShox founders Paul Turner and Steve Simons set about to bring the suspension revolution that they helped usher into the world of mountain bikes to the world of drop-bar racing. And with a shiny RockShox fork with just over an inch of travel mounted on the Team Z LeMond race bike ridden by Gilbert Duclos-Lassalle, they jolted the traditionalists with a historic win at Paris-Roubaix.

Suspension on road bikes had arrived. Well, not really. What came afterward was an avalanche of wannabe suspension solutions, all of which would eventually fade into the dustbin of history. Within a few short years, the idea of bolting a heavy suspension fork to the front of a lightweight road bike just seemed silly. 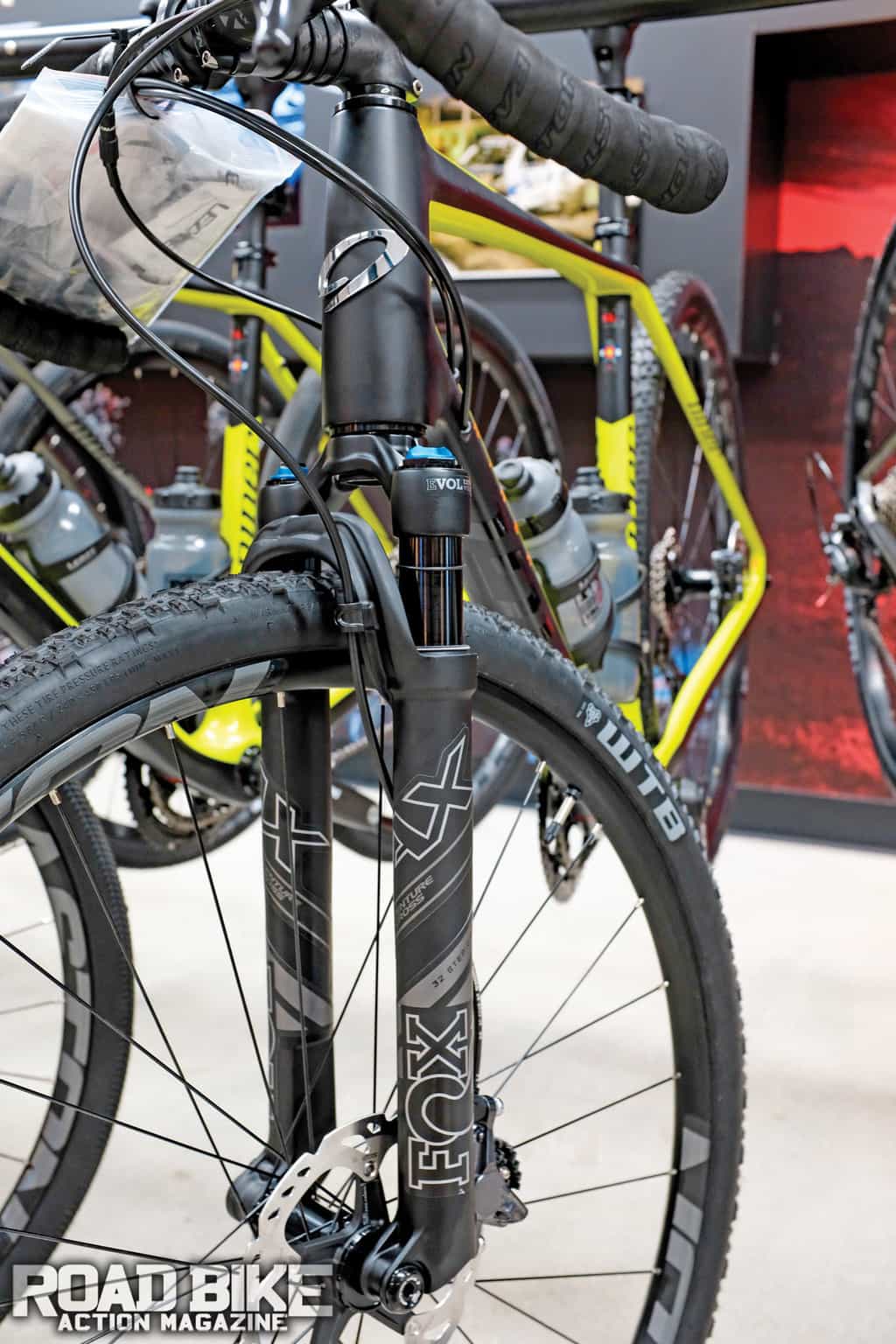 And then the gravel bike arrived, and suddenly looking for a smoother ride over rough terrain became a likable idea. In that vein, two years ago Zap borrowed a spare cyclocross bike mounted with a Lefty suspension fork with 40mm of travel from former national champ Tim Johnson’s stable of bikes to race at Dirty Kanza. It worked out well. The following year former editor Neil Shirley hit the start line in Emporia using the wild-looking Lauf suspension fork as a means to add speed and comfort over the 200 miles of harsh gravel roads.

For the last few years the gravel frenzy has continued to grow, and sensing a burgeoning market for a new product platform, world-renowned suspension-maker Fox Factory decided to take the prototype plunge with a chopped-down version of its proven step-cast mountain bike fork to see how and if it can be applied to the gravel set.

In the days leading up to the Sea Otter Classic, we were invited to the NorCal Fox Factory for the opportunity to ride the fork, as well as check out some other products from Easton Cycling that included a new gravel-bound wheelset, plus some new flared handlebars and a crank with a built-in power meter. 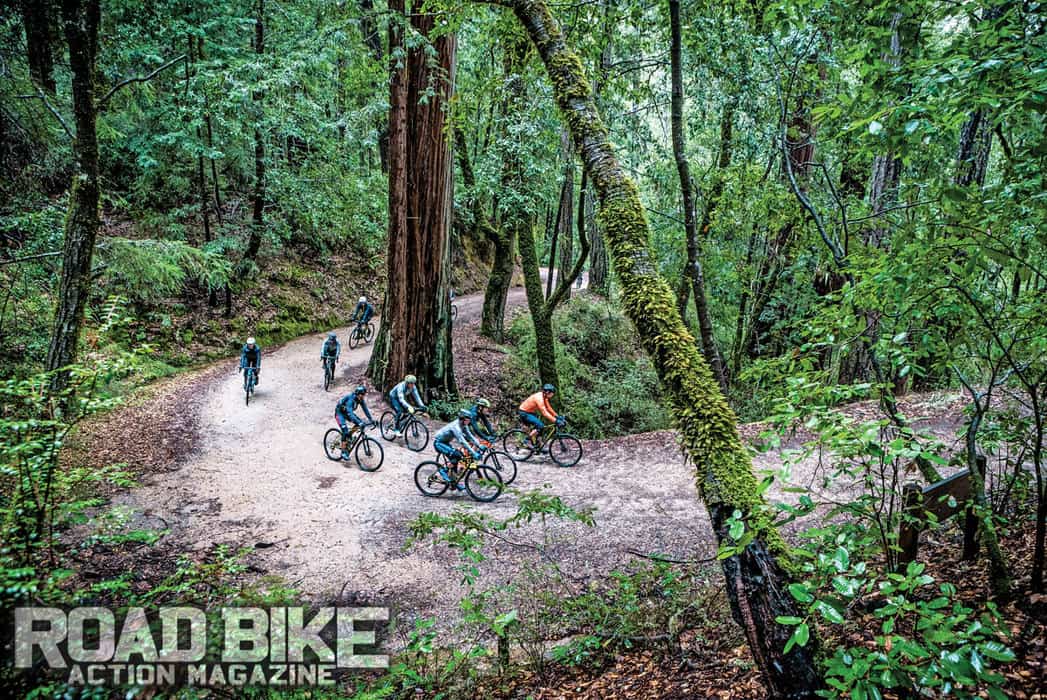 The Fox fork is actually the unintended byproduct of Easton’s R&D testing of their new AX line of products on their local back roads and trails. Wanting to push the limits of testing their wheels and components, Easton product managers reached out to their partners at Fox to see about developing a suspension fork to further enable their testing. Initially starting with a standard Step-Cast fork with 100mm of travel, they soon realized it was overkill, so they had some cut-down versions made (to 40mm of travel) one evening, and before they knew it, the whole office was buzzing about the new short travel fork.

The 32 Step-Cast AX fork gets most of its pedigree from its big brother, the 100mm Step-Cast, which was designed as a lightweight XC mountain bike race fork. While there are some differences, the base technologies have been tested with the top XC mountain bike athletes, as well as extensive lab testing. With that said, this is an open project and, as they admit, could use some refinements to allow easier and a wider range of compatibility with frames. The AX fork uses the FIT4 damper and Float EVOL air spring with 32mm stanchions and a 1.5-inch taper steer tube. The lowers are their 700c/ 27.5 Step-Cast with a new 45mm offset, 15mm Kabolt thru-axle and post-mount disc caliper. 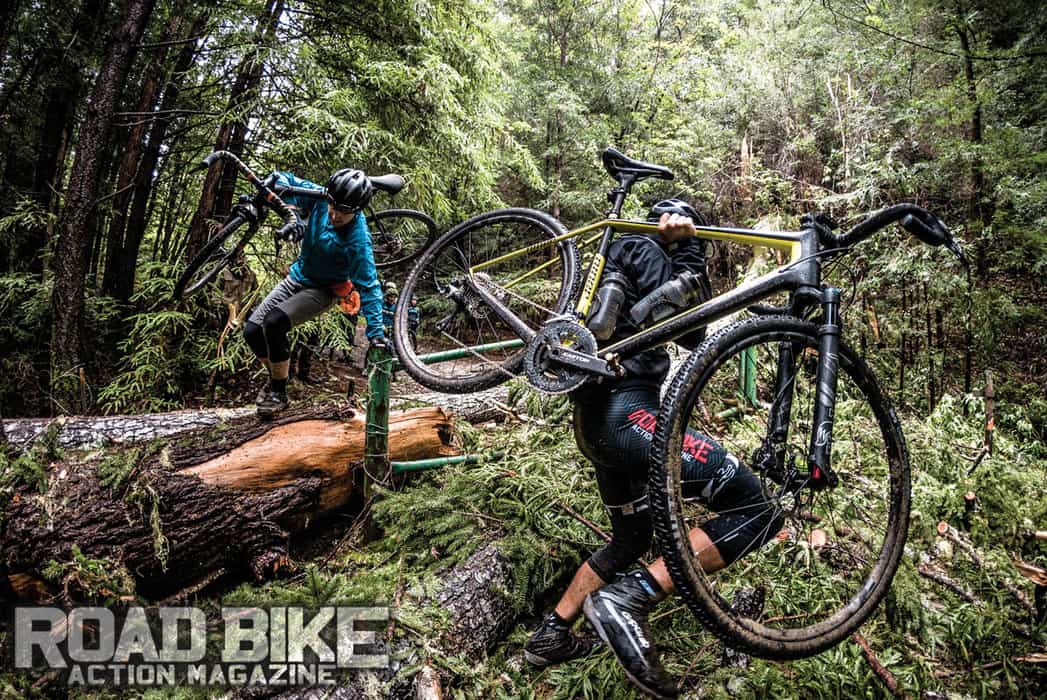 This all comes together with a few internal modifications as well. The first one being that there are five volume spacers in the air chamber. This means more air and a much more firm ride with less chance of bottoming out. Depending on your riding style and preference, this can be modified too. Then, on the damper side, things look very similar. The three-position (open, medium and firm) knob allows fine-tuning that can firm up the open setting with a total of 22 clicks. There’s also a knob located on the bottom of the left leg that provides 13 clicks of rebound adjustment.

Before any good ride on a new suspension fork, you must set it up. I know it seems complicated, but all these controls will make it worthwhile. We pumped up the air side to 120 psi,  then we set the rebound four clicks from the fast side of things and decided that we were ready to roll. And to make things a bit more entertaining and fun, it was raining on us in the beautiful Big Basin Redwoods State Park.

In what I would describe as a mountain biking-inspired gravel ride, we conquered 27 miles and nearly 4000 feet of climbing and descending. Even with the adverse weather conditions, the entire AX product line worked flawlessly. The flare on the Easton handlebars makes for a confident and comfortable option when in the drops, but yet it’s nearly unnoticed when in the hoods. The new wheelset felt stiff and confident on all terrains, even the worst of rock sections. 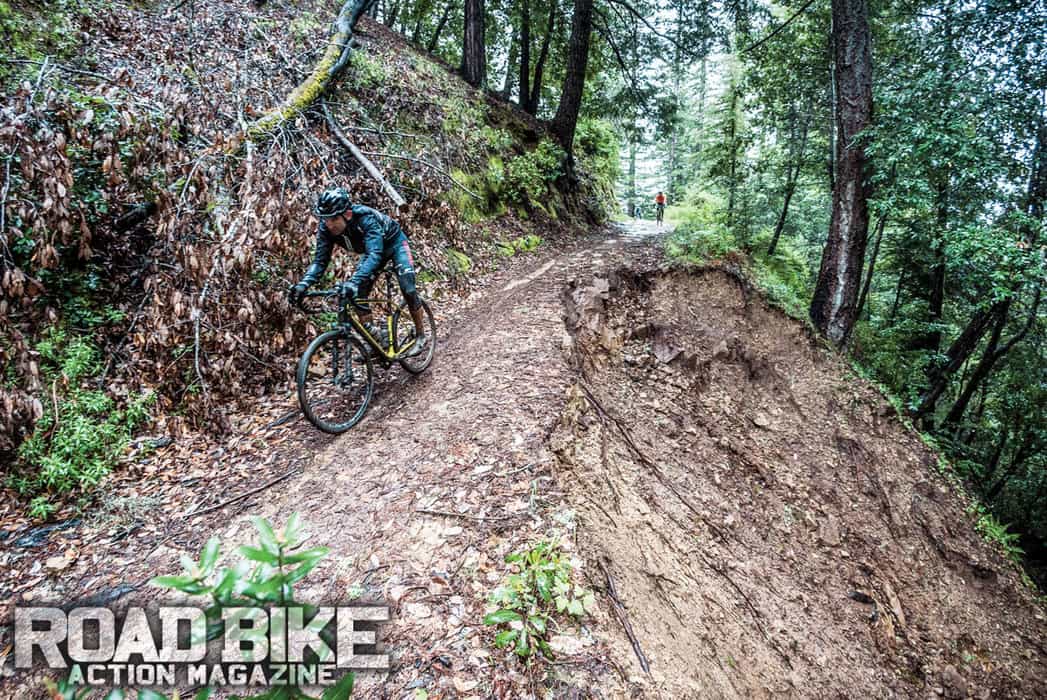 The single most talked-about component, of course, was the new Fox Step-Cast AX fork. With the three settings, we were able to choose one on the fly that best fit our needs. When climbing, we used the medium setting to allow a bit stiffer front end yet still manage the imperfections of the dirt. When on the rolling dirt flats and on the descents when the speed started to rise, we ran wide open, allowing us to be less selective on our lines. Finally, when we got on the paved road, we switched it all the way to firm, which is a lockout that has a valve to manage a big hit in case you forget to unlock it or you want to run it stiff all the time.

Easton started the frenzy because they wanted to test the new EA70 AX wheelset that takes much of its technology from their XC mountain wheels. Easton has built the wheelset around the popular Arc 24 rim platform. The rim measures 24mm internally and 28mm externally. The wheels are tubeless-ready and pair great with tires between 32 to 40mm. The finished product is a $600 alloy wheelset that uses center-lock hubs and can fit a quick-release and 12mm thru-axle front and rear, plus a 15mm thru-axle up front.

We have been big fans of nearly all of the recent additions to the road and gravel market that make it not only more comfortable but also help to maintain rider confidence. This is an early model that has had lots of testing on the longer-travel (100mm) version as a productive starting point. The compatibility of installing this fork could get a bit complex, as most gravel bikes are not designed to fit the crown of a suspension fork. 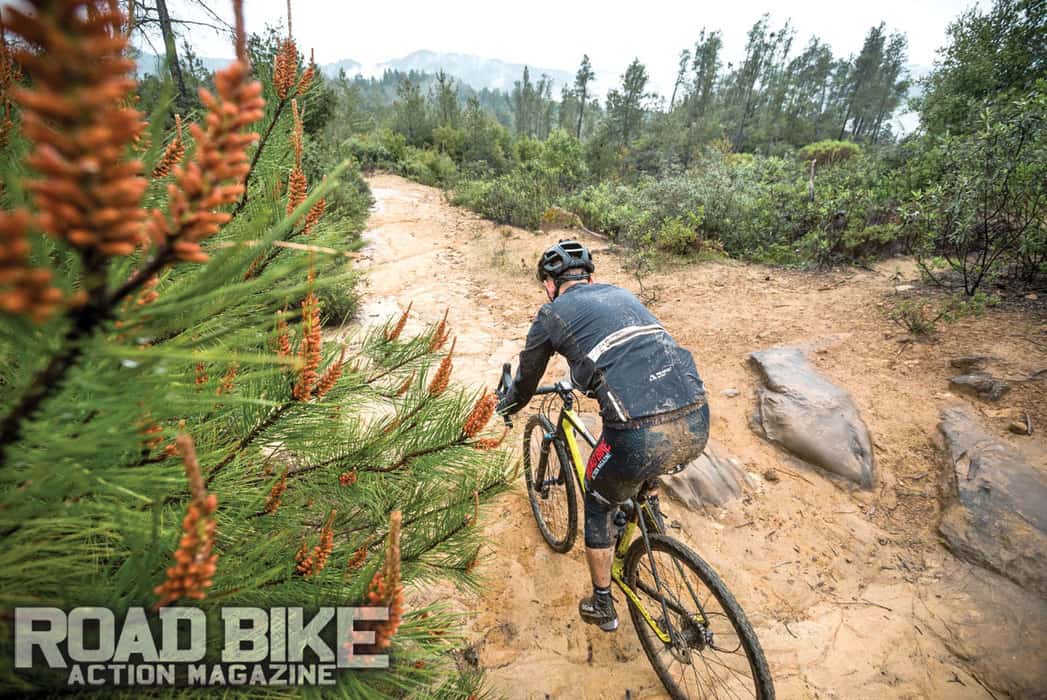 You could run the risk that if the bars turn too far, the crown will contact the downtube and damage the frame. Also, when fully compressed, the tire could contact the downtube. This is the case on the Niner, but there was a taller headset race installed that eliminated the risk of the crown contacting the frame. The other things we noticed were the 15mm thru-axle and post-mount brakes. Yes, it’s better than a QR, but the current market trend is a 12mm thru-axle and flat mount, so if you have a stock bike, verify that your existing parts can adapt to this; otherwise, you will have to purchase one that does.

I’m sure that with a bit more time Fox will fine-tune the fit and design of the suspension fork to better suit more gravel bike models. For sure a gull-wing crown would help to allow more clearance from the downtube. And, obviously, the fork could still use some serious shrinkage to be an optimal choice for truly efficient gravel riding. As we’d expect from Fox, the current version works great, but at its heart, it is still really a mountain bike fork.