How the epic Tourmalet climb made the short list 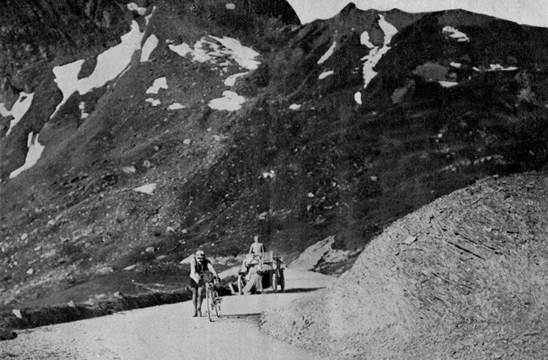 At the turn of each decade, the Tour de France has gone through organisational changes and backstage struggles that have variously turned out to be decisive or utterly inconsequential. Our journey back in time begins in 1910 with journalist-organizer Alphonse Steinès, who was tasked with reconnoitring the course before the riders were sent on their first high-mountain challenge, in the Pyrenees. He was the first winner on the Tourmalet!

110 years ago, the organisers of the Tour de France were already looking for new ways of spicing up the race, be it with rule changes or with gruelling new courses. At the office of the newspaper L’Auto, the most audacious and creative of these visionaries was Alphonse Steinès, Henri Desgrange’s odd-job man. He was the one who had first come up with the idea of letting the riders cross swords on the highest roads of the Pyrenees, at a time when the Tour de France had never gone higher than the 1,326 m Col de Porte and sporadic visits to Col Bayard (1,264 m), the Ballon d’Alsace (1,178 m) and Col de la République (1,161 m).

The course of the 1910 edition spelled double trouble for the peloton, featuring a mountain stage from Perpignan to Luchon and an even more fearsome one from Luchon to Bayonne. Desgrange, every bit as reluctant as he had been a few years earlier when Géo Lefèvre had first suggested organizing the Tour de France, decided to send Steinès to find out first-hand just how ridiculous his idea was. According to Desgrange, wanting to climb the Tourmalet was insane, not to mention the fact that the road was impassable.

Steinès, not one to give up easily or pass up the opportunity to go on a trip, took Desgrange at his word, jumped behind the wheel of his trusted Dietrich and headed to the Pyrenees. Although Steinès hit the road in late June, the previous winter had been harsh and long in the region, and snow had been reported at high altitude only two weeks earlier. Our very special correspondent found that the Tourmalet lived up to its ominous name (bad detour), seeing only a few bears and the occasional intrepid shepherd. The recce quickly deteriorated into an adventure and then into a nightmare after leaving Sainte-Marie-de-Campan. Steinès was forced to abandon his car and spend hours marching towards Barèges, on the other side of the massif. Once there, he wired Desgrange a reassuring message: “Crossed Tourmalet… STOP… Perfectly passable… STOP.”

“Keep in mind that going over the mountain passes, even when rehabilitated, will be no child’s play. It will require the biggest effort that any rider has ever made.”

It was just a bluff. He knew his boss was right to be concerned, as he freely admitted when recounting the ascent, which he described as an odyssey, in his column in L’Auto of 1 July: “Even if I lived to the ripe old age of 100, I would never forget the adventure of my struggle against the mountain, the snow, the ice, the clouds, the ravines, hunger, thirst… against everything. Trying to go over the pass in its current condition would be madness. My reckless gamble almost cost me my life. No more, no less.”

Quite the dramatic account. Steinès explained how, after covering the last two kilometres of the ascent on foot with a shepherd as a guide, he tackled the descent alone in the dark, got lost in a snow drift and fell into a freezing river, which he used to find the direction of the valley.

After this brief introduction, which cast our hero from Luxembourg as the earliest predecessor of climbers such as Charly Gaul and the Schleck Bros., the piece set out Steinès’s rationale on the feasibility of sending the riders into such inhospitable terrain. “The Col du Tourmalet and Aubisque are still not smoother than the concrete of the Parc des Princes, but based on what I saw, they will be passable once rehabilitated. What the hell, the Tour de France is no walk in the park! Keep in mind that going over the mountain passes, even when rehabilitated, will be no child’s play. It will require the biggest effort that any rider has ever made.”

In somewhat different words, Octave Lapize (photo)  confirmed this assessment three weeks later when he became the first rider to reach the top of the Tourmalet, albeit on foot. Coming across Victor Breyer —one of Steinès’s colleagues in L’Auto— at the summit, the man who would go on to win the stage did not mince his words: “You are murderers! No-one can ask men to make an effort like this.” Since the Giant of the Pyrenees made its debut in 1910, the peloton of the Tour de France has climbed it no fewer than 84 times —and Thibaut Pinot certainly looked much happier than “Tatave” when he crested the mountain last summer.