Greg Van Avermaet uploaded his win from yesterday’s Gent-Wevelgem to Strava, along with 47 other pros: https://www.strava.com/activities/916326892

Greg won the 2-up sprint ahead of Jens Keukeleire after Peter Sagan and Niki Terpstra (with Søren Kragh Andersen in tow) dropped from the front group and let a gap grow, which they couldn’t close.

On the way to victory, Greg clocked up 16 top 10 Strava segment places, including a KOM on the Kemmelberg Kemmel – Top segment – equaled only by Arnaud Demare. Averaging a cadence of 84 throughout the race, Greg reached a max speed of 55mi/h descending from the Col du Mont Noir. He also received more than 1,850 Kudos from the Strava community! 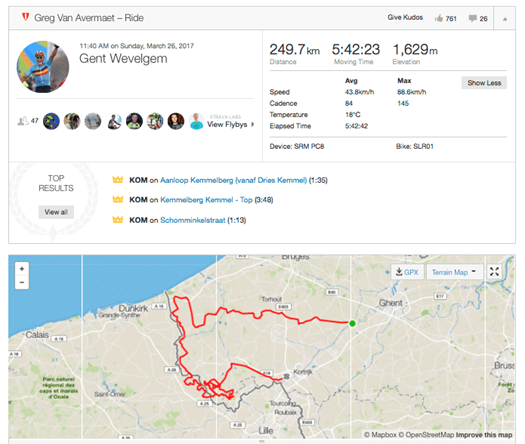 “THIS VICTORY IS CRAZY!” GIRMAY REFLECTS ON HISTORIC RIDE